Accessibility links
Physical And Verbal Abuse Of Mothers During Childbirth Documented In New Study : Goats and Soda Physical and verbal abuse are a shockingly common experience for mothers, a new study in The Lancet reports.

Why Are Health Care Providers Slapping And Yelling At Mothers During Childbirth?

Why Are Health Care Providers Slapping And Yelling At Mothers During Childbirth? 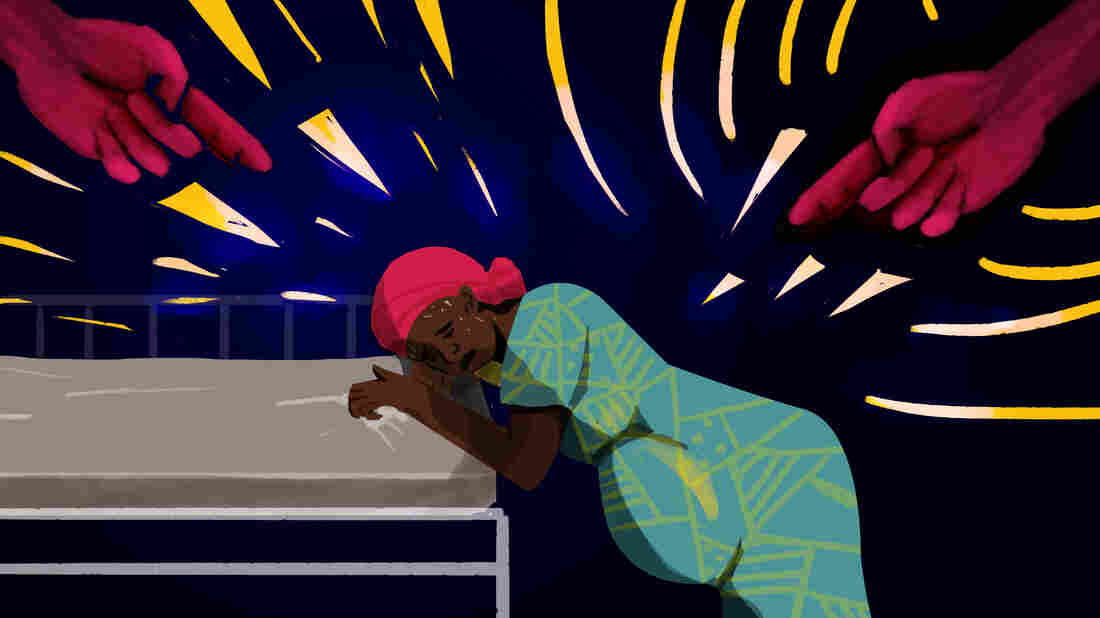 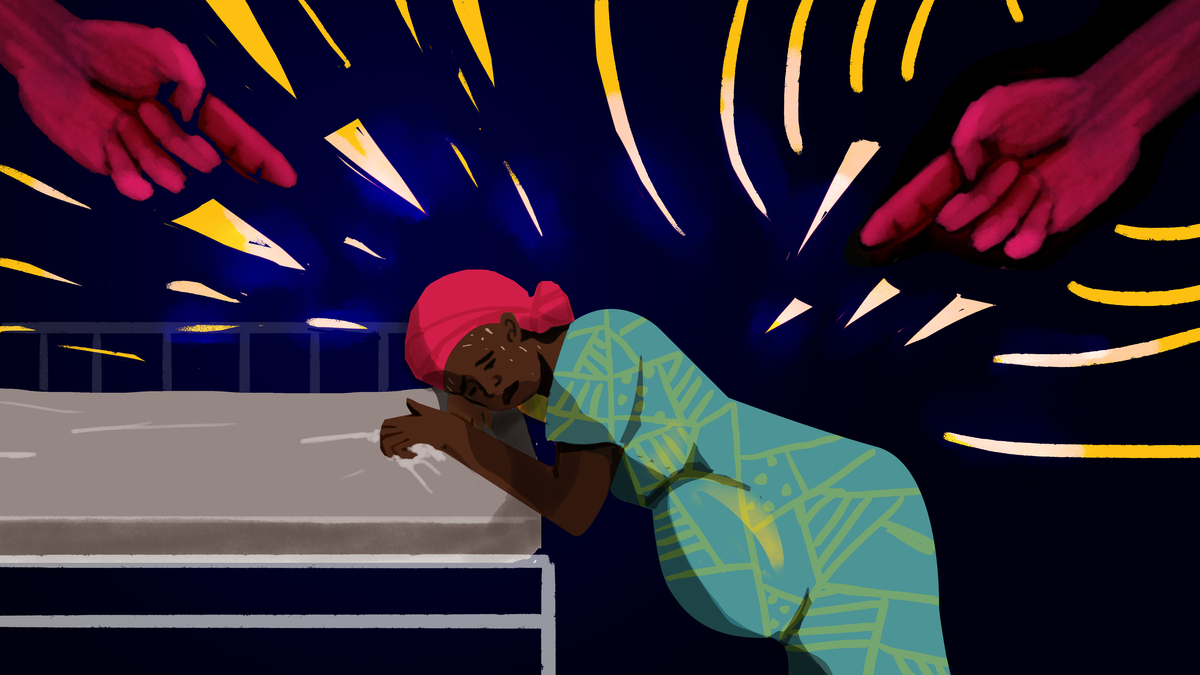 Imagine being in labor for hours, enduring contractions that make you feel as if your insides are tightening, twisting and ripping apart. Your ordeal is almost over, but now, more than ever, you need comfort and encouragement from your health-care team.

Now imagine that just when you need unconditional support, you get slapped or pinched. When you need compassion, you get mocked for getting pregnant in the first place. Or yelled at for not pushing hard enough.

Instead of being treated with patience, you get someone pressing on your abdomen to try to make the baby come out faster.

Those are some of the ways women have been treated during childbirth in four low-income countries, according to a study published this month in The Lancet. Mistreatment can happen any time during childbirth, but it's during the crucial final moments of labor — from 30 minutes before birth to 15 minutes after birth — that women were most vulnerable to physical or verbal abuse, the study found.

"The most common physical abuse is slapping the thighs, especially when women try to close their thighs at the time of delivery," Dr. Ernest Maya said in an email interview. Maya, an obstetrician at the University of Ghana, is an author of the study.

Researchers from Ghana, Guinea, Myanmar and Nigeria, sent trained observers to three urban hospitals in each country to watch pregnant women from the time they were admitted until two hours after delivery. They found that of 2,016 women directly observed, 838 (41.6%) experienced physical or verbal abuse. In addition, the study reported on surveys of 2,672 women interviewed up to eight weeks after they gave birth at those same facilities and found that 945 (35.4%) of them reported some form of physical or verbal abuse.

Until recently, health care policymakers in poor countries were primarily concerned with women's survival during the birth process. No one thought much about the quality of their birth experience, says Cheryl Moyer, associate professor at the University of Michigan and author of a related commentary in the same issue of The Lancet.

That changed in 2010, after a report by Diana Bowser and Dr. Kathleen Hill for the U.S. Agency for International Development got the world's attention.

"Of course, survival is important. But Bowser and Hill found that whether they survived or not, women were not always being treated very well," Moyer says.

Bowser and Hill reported evidence of health-care providers humiliating women in 150 studies covering 18 different countries, most low- and middle-income but including the U.S. and Canada. Reports from the U.S included such things as women saying they were coerced into having a Cesarean section, and women reporting racism and discrimination. The report also noted a Human Rights Watch report saying that pregnant women have died while being detained in U.S. immigration facilities.

Other reports among the countries studied included instances of women being abandoned at crucial periods during labor and delivery, not given privacy and not being informed before receiving an internal exam or other medical procedure. In the studies that were reviewed, women reported that providers hit them and yelled at them.

"This is a not a problem that is confined to low-resource settings," Moyer says. "The manifestations may be slightly different, and the magnitude may be different, but it is safe to say that the women with the least power – those who are young, poor, uneducated or from a racial or ethnic minority group – are often those at highest risk of maltreatment during labor and delivery."

After the Bowser and Hill review, other researchers took a closer look at the problem in developing countries, Moyer says, but researchers were defining and measuring maltreatment differently.

"It was a very real problem everywhere, but it was difficult to compare findings," she says.

The new Lancet study addresses helps bring consistency to the measurement of abuse of pregnant women.

"This study looked at maltreatment across four different countries using two different measurement techniques – and even so came up with consistent findings that more than a third of women experience some sort of maltreatment," says Moyer. "These results put to rest assertions that maltreatment is rare, that it is too hard to measure or that it varies widely."

The new study confirmed that poor women and young women were at greatest risk of abuse.

"One of things we found is that when adolescent girls are using maternity services, some providers are making judgments about their sexuality," says the study's lead author, Meghan Bohren, of the School of Population and Global Health at the University of Melbourne in Australia.

Health-care workers might not hesitate to mock a teen mother, for example, when she cries out during labor.

"A common report we hear is of providers saying something like, 'Were you yelling like that when you made this baby?'" says Moyer.

How does basic kindness by health providers go out the window when women in labor are most vulnerable?

Well-meaning health-care workers can be overwhelmed, researchers say. In poor countries, there are often too many patients, not enough providers and inadequate medical supplies.

"When a midwife is working alone, and she has countless other women delivering at the same time, and she has no pain medication to offer, and she knows that she will be blamed if the baby dies, it is understandable that she might yell at or slap a woman," Moyer says.

"The providers we have interviewed generally know what is appropriate and not, but circumstances can escalate. So is maltreatment the provider's fault? Obviously, at some level, yes. But it is far more complicated than simply blaming providers."

Moyer suggests that one step would be training health workers about informed consent, so patients understand what is happening to them.

Administrators need training, too. "Managers of facilities should be educated to be supportive of their staff when things go wrong and not to blame them always," says Maya. "Women should also be educated to demand respectful care as their right."

There are also some simple fixes, says Moyer — for example, curtains around beds for privacy in crowded hospital wards.

"This is a wake-up call," says Maya. "Labor and delivery are already distressing for women. As health-care workers, we should not add to the distress."

After all, says Bohren, "becoming a mother is supposed to be a beautiful time."