Accessibility links
Dance Music From Congo's KOKOKO! Is Made On Pots, Synths, Air-Conditioner Parts : Goats and Soda The band couldn't afford instruments. So they made their own out of scavenged items, like kitchen pots and air-conditioner parts. On their U.S. tour, they stopped by NPR's Tiny Desk. 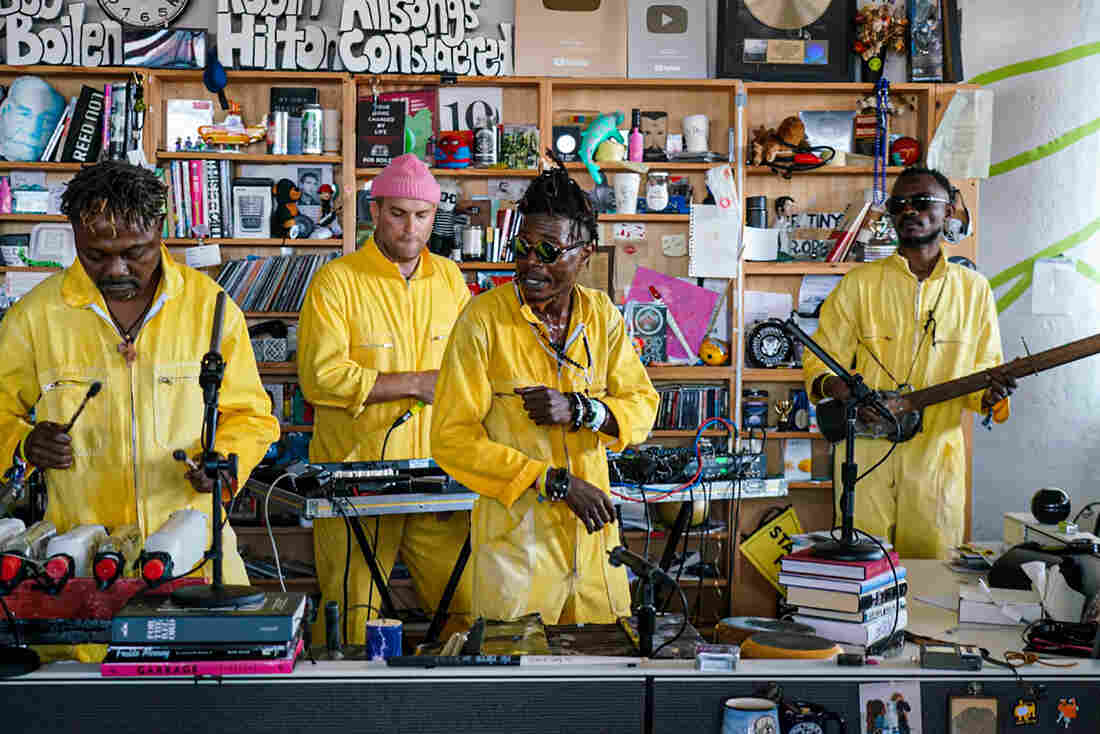 KOKOKO!, a band from the Democratic Republic of Congo, performs at an NPR Tiny Desk Concert that will be posted at a future date. Bob Boilen/NPR hide caption 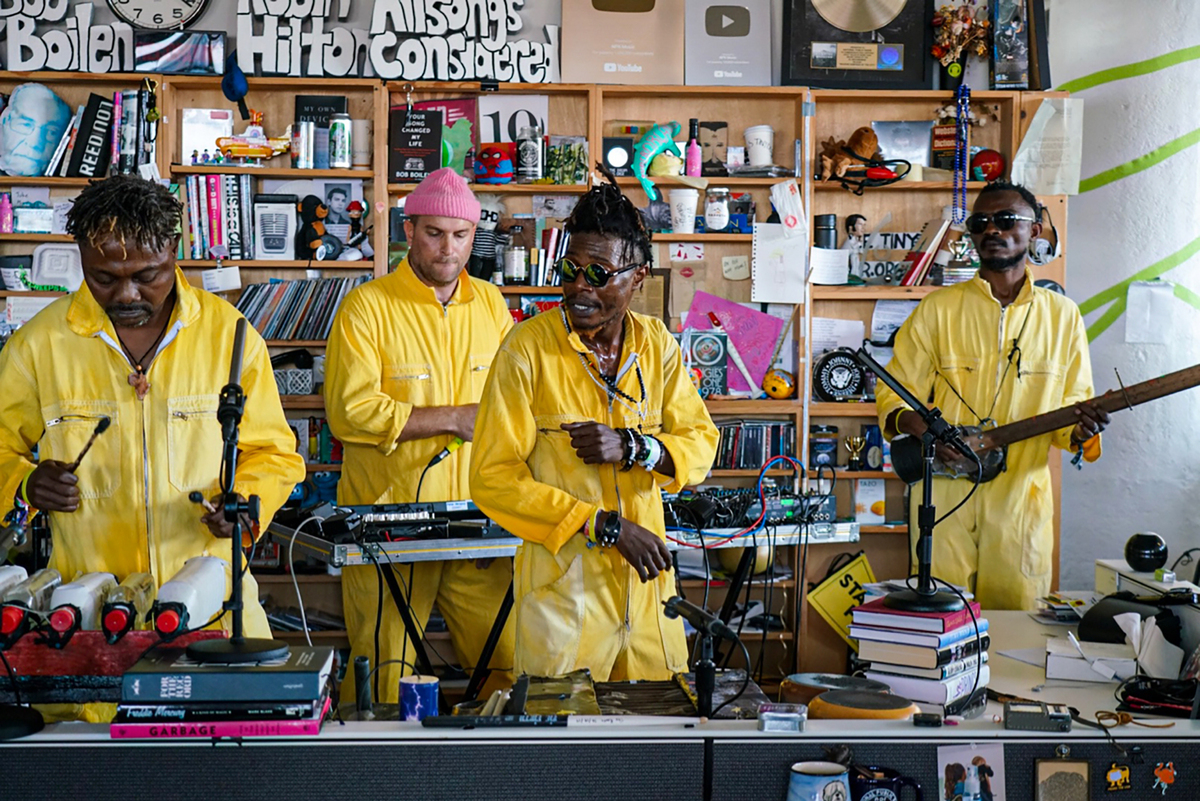 KOKOKO!, a band from the Democratic Republic of Congo, performs at an NPR Tiny Desk Concert that will be posted at a future date.

Before the members of Congolese music collective KOKOKO! take the stage at Washington, D.C.'s Rock & Roll Hotel, they slip into bright yellow jumpsuits.

The fashion choice, they explain, has utilitarian roots: That's what a lot of workers in Congo wear. Their instruments have a similar no-frills style — they were crafted from kitchen pots, tin cans and air-conditioner parts.

"It started out because commercial instruments in Kinshasa [where they live] are too expensive to buy and also too expensive to rent. So it started with the necessity of creating your own guitar or your own bass," says member Boms Bomolo.

The group's name reflects their humble origins. "KOKOKO" means "knock knock knock" in the local language, Lingala. When they were getting started in 2016, they picked it as a call-out for somebody to open the door and let their music in.

And the door is definitely open for their joyful dance music, with energetic percussion, electronic beats and call and response vocals between the band members and audience. Even if the crowd at Rock & Roll Hotel doesn't understand the Kikongo, Lingala, French and Swahili lyrics, they eagerly repeat the words back to singer Love Lokombe.

In their first two years, KOKOKO! toured the world and released a slew of singles and an EP. They dropped their debut LP, Fongola, in July to rave reviews. Earlier this year, their performance at South by Southwest music festival in Austin, Texas, caught the attention of NPR's All Songs Considered. Now wrapping up their first big tour across North America, they stopped by NPR's Tiny Desk on October 1.

During the concert, the group's instrumental inventory included rows of plastic containers, pots and pans and a guitar fashioned out of two cans and a wooden fretboard. Some of the objects were ready to be played with no adjustments, like the metal kitchen pots used for percussion. Others, like the drum kit that features parts of an old air-conditioning unit, took a bit more assembly — the musicians had to go out, collect scraps and combine them into one cohesive instrument.

Perhaps their greatest creation is a "monumental human-size bass harp," as described by member Xavier Thomas — made from a wooden cross, metal cans and a plastic barrel. They call it "Jesus Crisis," a humorous reference to evangelical churches in Congo, which Thomas says can get quite "inventive" with their religious interpretations. The harp was made by group member Dido Oweke, who, according to his bandmates, visualizes the instruments he wants to make as sculptures first. 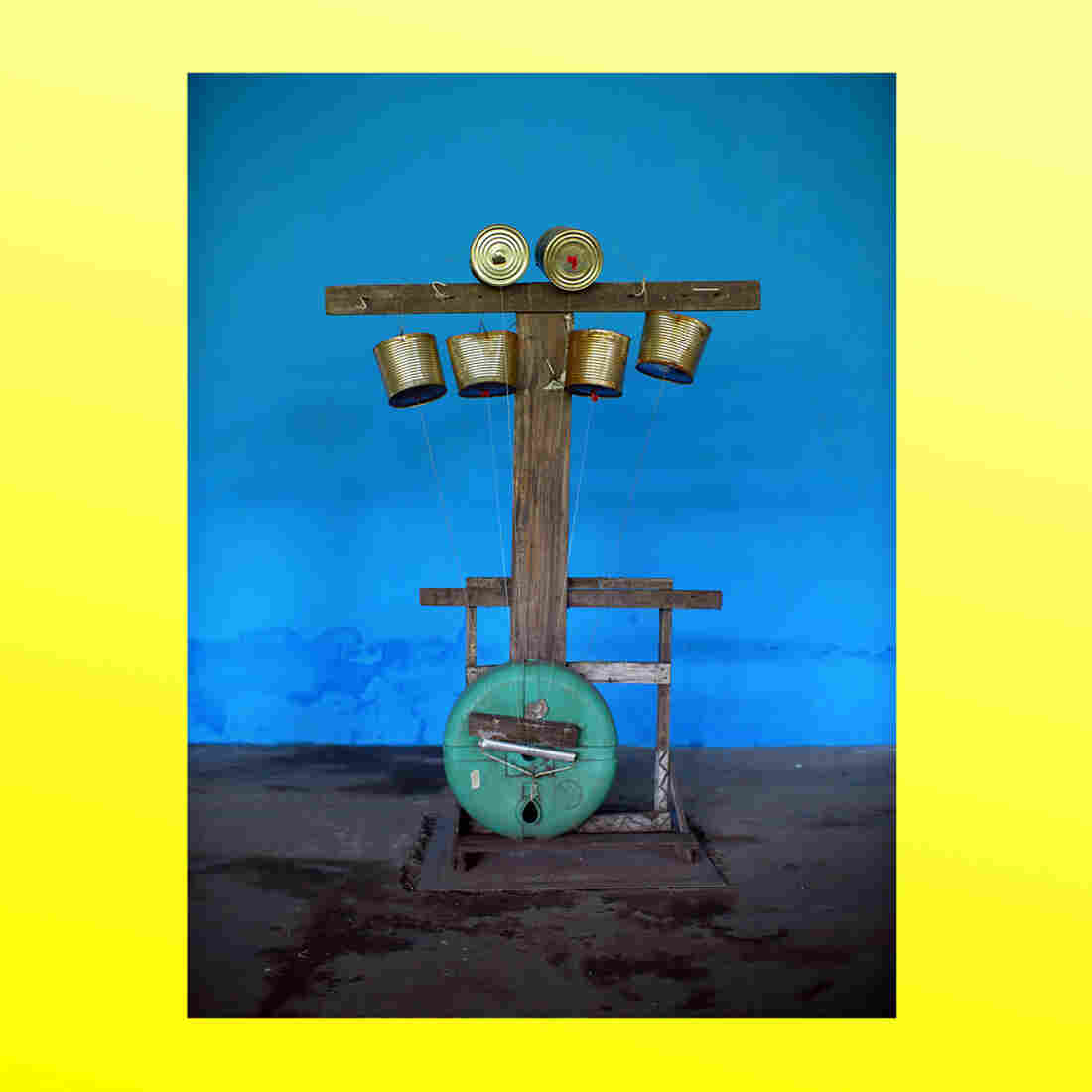 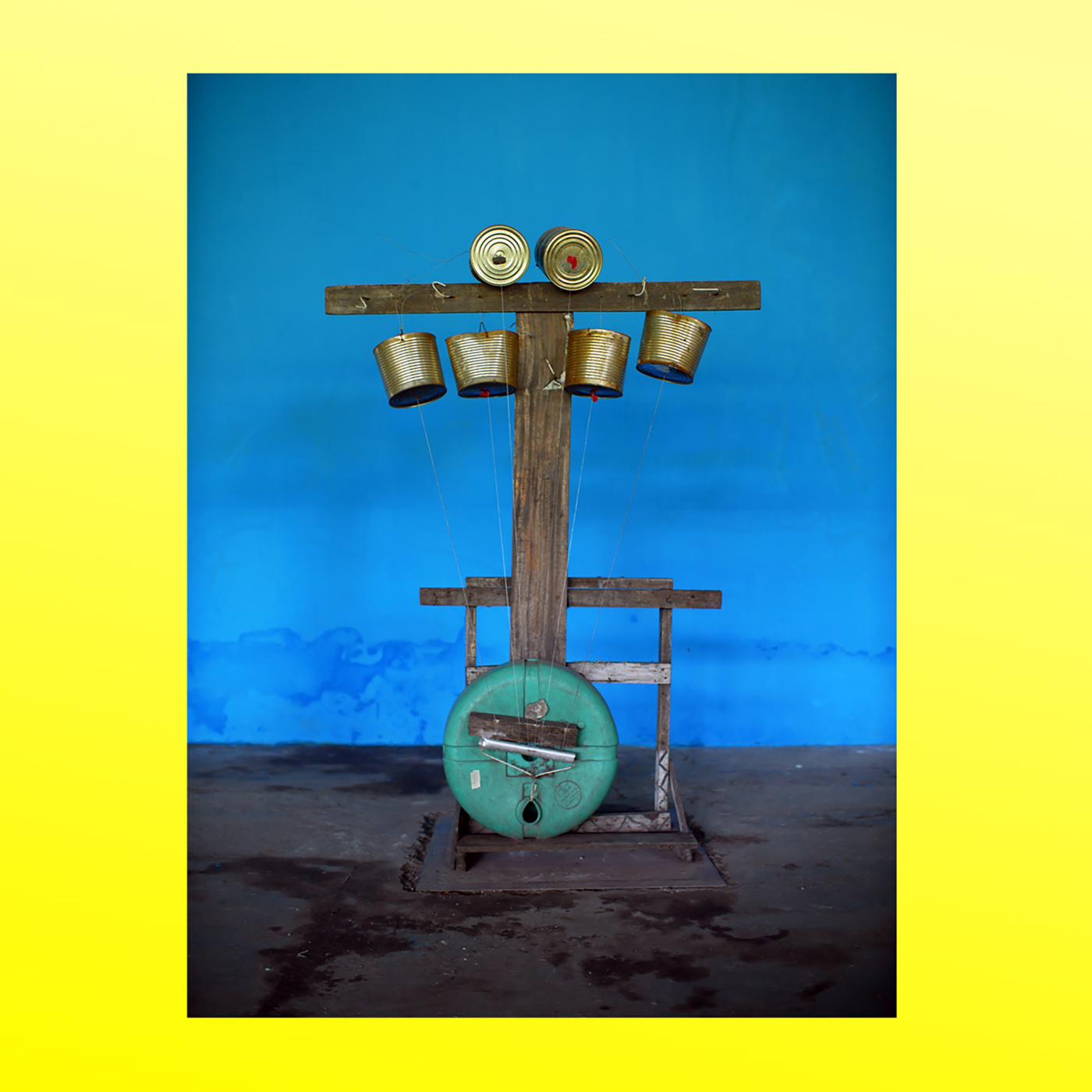 "We brought [the harp] once on tour, but it's so hard to transport. It's like moving a house," says Thomas, also known as Débruit when he does solo electronic music projects. Thomas, originally from France, is the only member of the band not from Congo; he acted as the interpreter for the other musicians interviewed for this story.

Thomas met his bandmates while working on a music project in Kinshasa. They jammed together at a block party in 2016 and formed the group shortly after.

The music itself, which combines homemade instruments with electronic synths, channels the sounds and spirit of KOKOKO!'s birthplace. Kinshasa, home to an estimated 12 million people, has a rich aural landscape, according to Bomolo, Thomas and percussionist/vocalist Makara Bianko. Street vendors clink nail polish bottles together. Shoeshiners call out to customers. Megaphones blast recorded advertisements for cellphone credits on a perpetual loop.

"With your eyes closed, you can tell who's where — at what distance," Thomas explains. "Boms is inspired by the sonic chaos and reorganizes it into music."

KOKOKO!'s high-powered performance, yellow jumpsuits and all, is a demand to be seen and heard in the middle of Congo's vibrancy — but they also make a point on their website and during the interview to highlight the challenges faced by Congolese people.

The world sees Congo as an Ebola hotspot — the country is currently is facing the second largest outbreak in history. But the musicians say the virus does not play into daily life in Kinshasa, which is more than a thousand miles away from the affected area. The members of KOKOKO! have other concerns, like violence, corruption and poverty. The World Bank estimates that 73% of Congo's population lived in extreme poverty in 2018.

Congo is rich in natural resources, making it a top producer of metals like cobalt and coltan. But Bianko believes that the wealth from those resources mainly profits industrialized nations and the multinational corporations that mine in Congo.

"Every time the industry needed something in the world, they found it in Congo, but they didn't leave anything behind," says Bianko.

The Congolese way is to not let those struggles haunt their everyday life, says Bianko. People in Kinshasa maintain a spirit of resistance, the group explains — of not letting the financial and political turmoil affect their ability to get dressed up, go out, have fun. Or make music.

That's why the magic of KOKOKO! is not just that they worked with what they could find to make music. It's that they dove deep into the research of harnessing sounds from unusual objects and became a project of sonic revolution in the process.

"Now, this is what makes our sound, these instruments," says Bianko, noting that they're still adding new objects to their repertoire with every tour. "We wouldn't switch back [to traditional instruments] because these instruments are the identity of the band."

The "knock knock knock" of their names has evolved as well. As political instability rocked Congo in 2017, they were literally knocking on the doors of embassies across Kinshasa, trying to get visas approved so the band could tour internationally.

Now, they say, they're knocking on people's consciousness "to open up to the kind of musical innovation we're proposing."

For more info on Tiny Desk Concerts sign up for the NPR music newsletter.