Accessibility links
How Countries Block Big Tobacco: No Meetings, No Gifts And Other Strategies : Goats and Soda The first-ever Global Tobacco Industry Interference Index points to the creative rules that some nations use — and what happens when contact isn't policed. 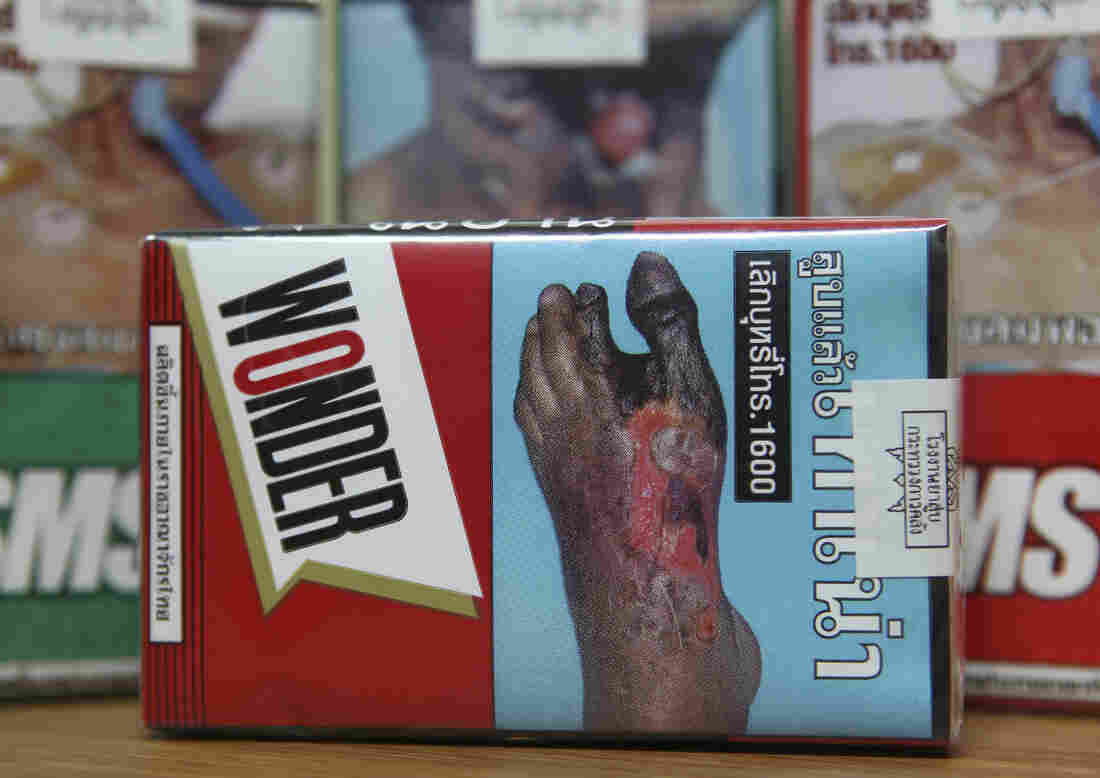 This notice on a cigarette packet in Thailand shows the potential impact of reduced blood circulation to extremities because of smoking. Such pictorial warnings are among the anti-smoking measures that are more likely to be found in countries that have limited Big Tobacco's influence on their politics, according to the new Global Tobacco Industry Interference Index. Apichart Weerawong/AP hide caption 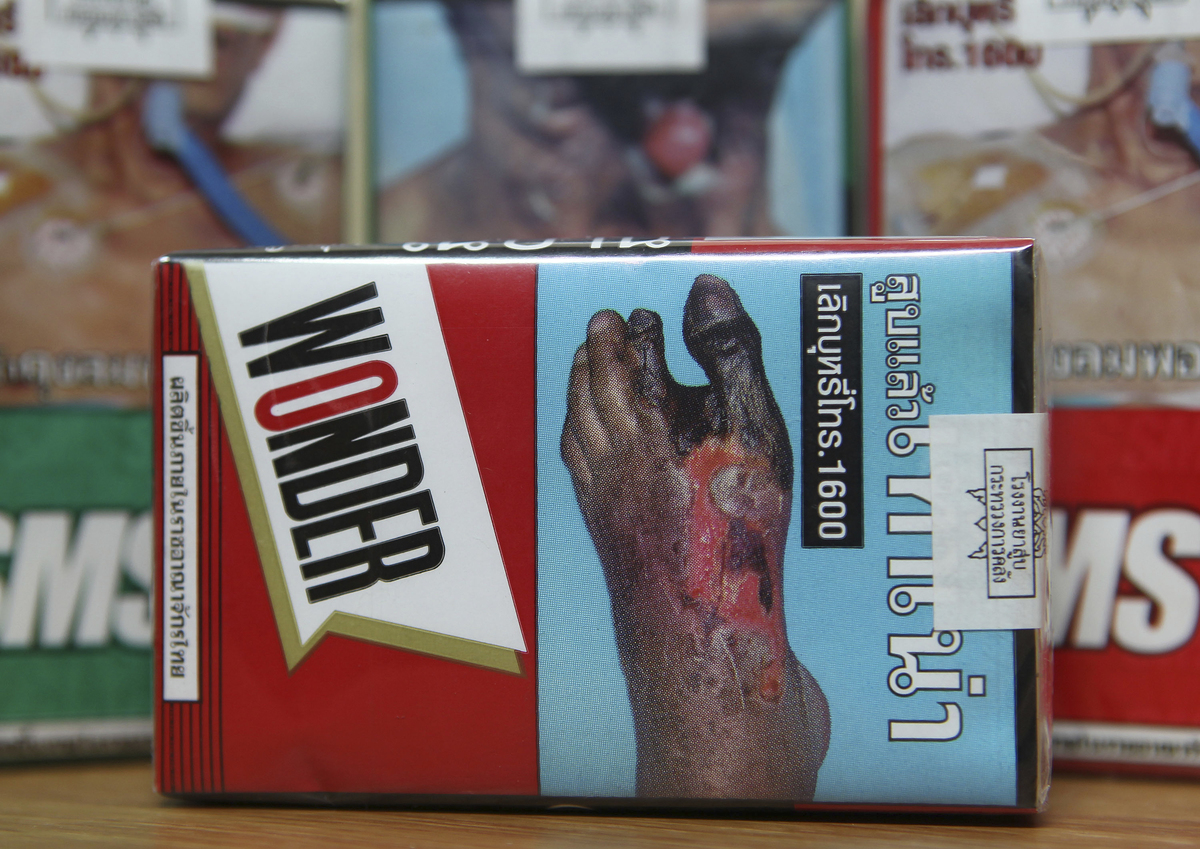 This notice on a cigarette packet in Thailand shows the potential impact of reduced blood circulation to extremities because of smoking. Such pictorial warnings are among the anti-smoking measures that are more likely to be found in countries that have limited Big Tobacco's influence on their politics, according to the new Global Tobacco Industry Interference Index.

Uganda explicitly bars government officials from accepting gifts of any kind from cigarette-makers. French and British officials must publicly announce any encounters with representatives of the industry. Thailand and the Philippines won't even let officials take a meeting except under the narrowest of circumstances.

These are some of the measures deployed by countries around the world to limit influence over their anti-smoking policies, according to the first-ever Global Tobacco Industry Interference Index.

Produced by the global advocacy group Stopping Tobacco Organizations and Products, or STOP, the index ranks 33 countries on a measure that is often overlooked yet crucial, says the report's author, Mary Assunta.

Of the 33 countries, the ones with the least interference are:

Those with the most interference are:

The United States ranks No. 8 for most interference.

Assunta notes that prior global rankings on the tobacco issue have tended to focus on anti-smoking measures — such as taxing cigarettes and limiting advertising by cigarette companies — and then compare the degree to which those policies have actually curbed smoking.

But before any of that can happen, she says, "countries need to block off any attempt at interference from the industry. They should not be distracted by the arguments the tobacco industry would present to them." It's not a coincidence, she adds, that "if you look at countries with good tobacco control measures that are seeing a drop-off in the prevalence of tobacco use, you will find that they allow very little interference from the industry. It's the protection that governments need to ensure they are free to act for the best of the public."

Indeed, just over a decade ago, more than 120 nations pledged to strengthen those kinds of protections as part of a global treaty on tobacco control. The report's assessment of their progress is not encouraging. True, there are instructive examples of anti-smoking measures taken by top-ranked nations. But overall, "implementation is moving at a glacial pace," says Assunta, a partner of STOP and head of research at the Bangkok-based Global Center for Good Governance in Tobacco Control, which tracks compliance with the treaty.

In Japan, the country that came in dead last in the index, Assunta says, the biggest problem is that the government owns about one-third of the global company Japan Tobacco — maker and seller of major brands such as Winston and Camel.

"This means that the Japanese government takes a direct interest in ensuring the success of the tobacco business," says Assunta. Among the results: "To this day, tobacco advertising has not been banned in Japan, and pictorial warnings are not required on cigarette packs. In fact, the government even provides subsidies to eating establishments to establish smoking rooms inside buildings."

Bangladesh, Pakistan and Sri Lanka have a related problem — a "revolving door" culture in which senior officials frequently leave government jobs to join tobacco companies, says Assunta. And even when there isn't an explicit link between the industry and the agencies responsible for regulating them, there's often a philosophical alignment, especially when it comes to officials in government agencies that promote trade and economic growth, such as finance ministries.

Officials in those agencies are therefore more susceptible to arguments that the tobacco industry tends to make — for instance that taxing cigarettes will hurt tobacco farmers or just lead to smuggling. This, in turn, sets up a clash with officials in health agencies that have a strong interest in reducing smoking. "And the reality," says Assunta, "is that business or economics usually trumps health in many countries."

An important way to counter this, she says, is to dramatically reduce the contact that cigarette-makers can have with officials — even interactions that can seem innocuous. For instance, one way the tobacco industry gets face time with key officials in many countries' finance ministries is to present them with "awards" for promoting corporate responsibility.

The Philippines is particularly adept at heading off such tactics. "The Philippines civil service commission has said they will only interact with the tobacco industry under three circumstances: for control, for regulation and for supervision," says Assunta: "So no attending social functions or attending awards ceremonies or going on 'research trips.' " Thailand and Uganda have enshrined similar provisions into law.

Of course, such laws affect only bureaucrats. Limiting the tobacco industry's ability to lobby elected officials is just as crucial, says Assunta. In this area, Canada and the U.S. are two of the standouts. Advocates for campaign finance reform often note the many side doors through which money can enter politics in the United States. But at least, says Assunta, the U.S. requires candidates to list direct donations. "There are very few countries that actually require disclosure," she says. "I think it's logical that any business that is making political contributions will one day call upon the official to return the favor."