Accessibility links
Blood Is In Short Supply In Hospitals Around The World : Goats and Soda The first global analysis of blood supply and demand finds that many developing countries are relying on risky emergency donations.

Hospitals Around The World Have A Dire Shortage Of Blood

Hospitals Around The World Have A Dire Shortage Of Blood 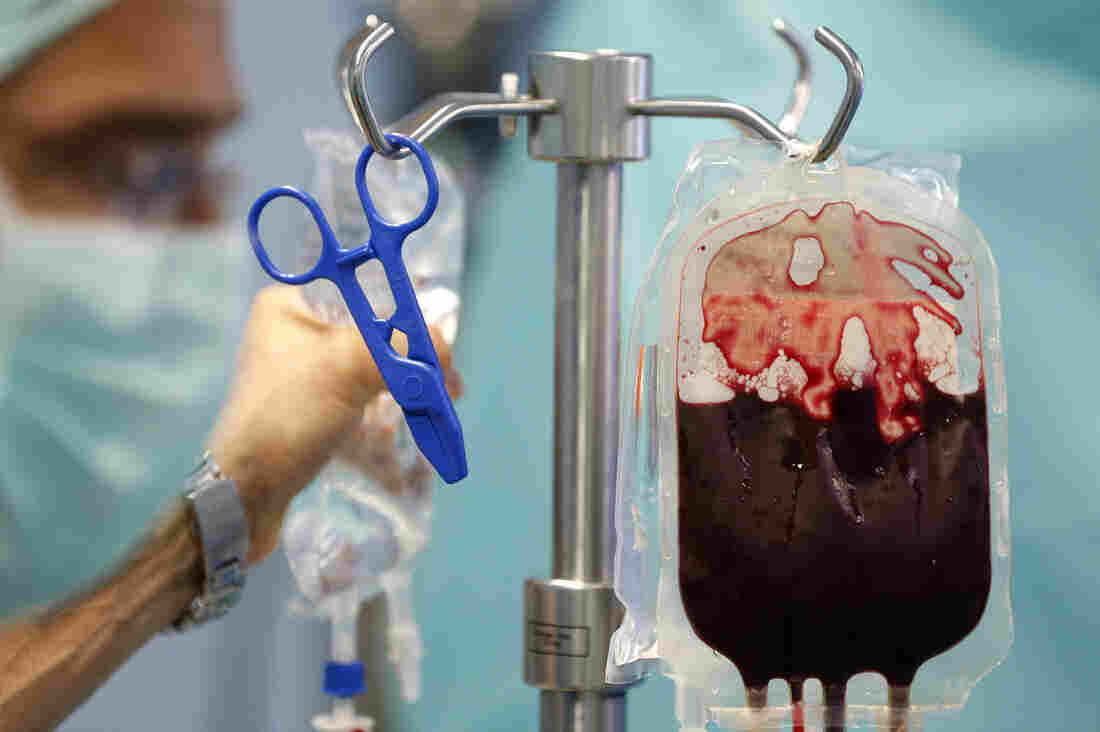 A blood transfusion bag hangs in an operating room in a hospital in the Republic of Congo. Most countries in sub-Saharan Africa have a huge gap between blood supply and demand, new research found. Godong/Universal Images Group/Getty Images hide caption 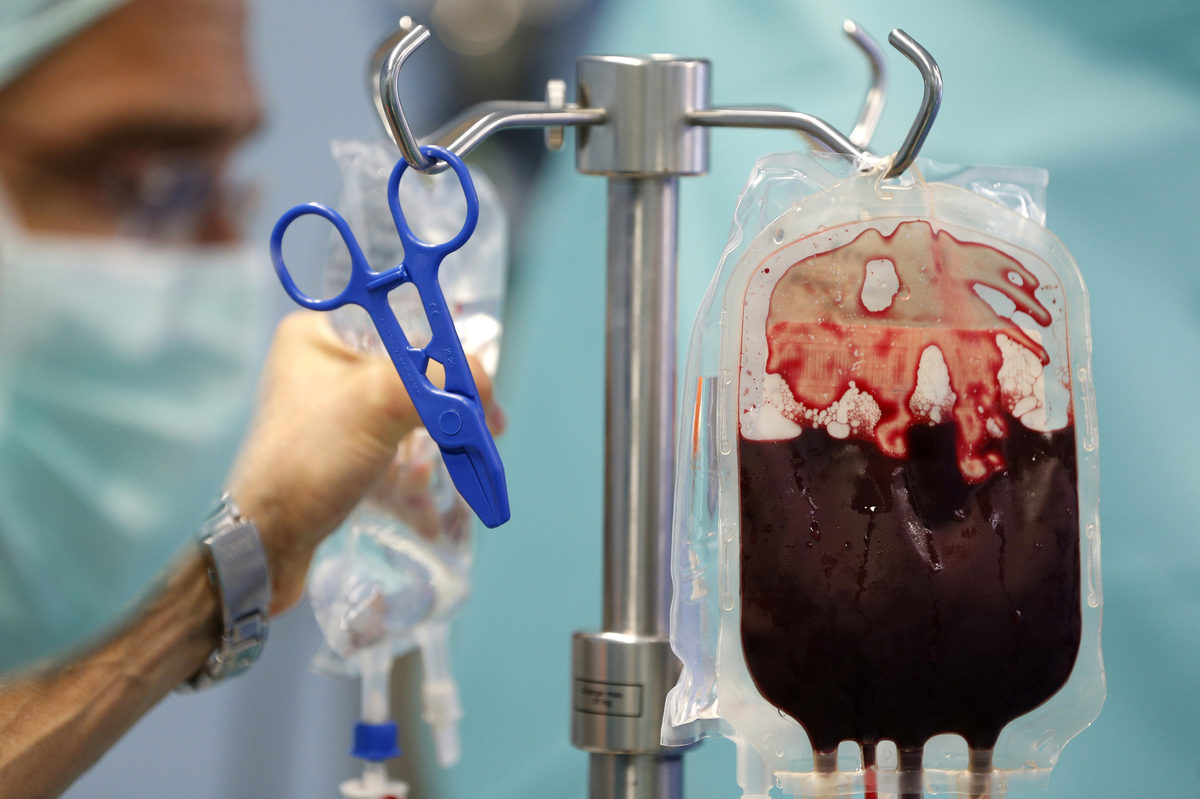 A blood transfusion bag hangs in an operating room in a hospital in the Republic of Congo. Most countries in sub-Saharan Africa have a huge gap between blood supply and demand, new research found.

When Claude Tayou Tagny was a young medical student on a rotation through clinics in rural Cameroon, he treated a woman during a difficult childbirth. She had lost, by his estimate, at least three pints of blood, triple the normal amount for childbirth and equal to roughly 30% of her total blood volume.

Tagny, with no supply of blood on hand, did the only thing he could: put out a call to the woman's family for emergency donations. He was only able to raise one pint.

"It was not enough," he says. The baby survived, but the woman did not.

It wasn't the last time Tagny, now a hematologist at the University of Yaounde Teaching Hospital, would confront a similar crisis. He says that a family's frantic rush to collect blood — critical for treating everything from traumatic injuries and malaria-caused anemia to sickle cell disease and cancer — are part of the hospital's daily rhythm. And there's never enough.

"That is what we are facing every day," he says. "People dying because they don't have blood available in the hospitals."

A Place Where The Opioid Problem Is Upside Down

Blood has long been a rare commodity across much of Africa, Tagny says, both because there's a lack of public awareness about the need for non-emergency donations — blood drives at college campuses, churches or community centers are infrequent — and a lack of cold-storage facilities to keep and distribute what little blood is available, particularly in rural clinics, where the blood supply is even more limited than in urban hospital settings.

Now, new research from a consortium of American hematologists reveals just how big the gap between blood supply and demand really is in many developing countries. Published this month in The Lancet Haematology, the study closely compares blood availability estimates compiled by the World Health Organization for 180 countries with data from the University of Washington's Institute for Health Metrics and Evaluation on each country's unique profile of diseases as well as estimates from the medical literature of how much blood is typically needed to treat each disease.

That comparison yielded what the researchers say is the most detailed analysis ever published of the world's blood need-to-supply ratio. Of the 180 countries analyzed, 107 had insufficient blood to meet their needs.

The biggest relative gap, they found, was in South Sudan, which has been embroiled in a six-year civil war that has created widespread public health problems while simultaneously eroding the country's health care system. The need for blood there — 3,537 units per 100,000 people — was 75 times greater than the supply of 46 units per 100,000 people (one unit, what a person typically gives in a blood drive donation, is roughly equal to a pint).

Most other countries in Africa, as well as South and Central Asia (including China and Russia), also faced major shortages. In North America, Western Europe, much of South America and Australia, supply was equal to or greater than need — the U.S., for example, had twice the blood it needed. In Africa, only South Africa met the need threshold.

Meghan Delaney, chief of the Division of Pathology and Lab Medicine at Children's National Hospital and one of the study's lead authors, says that even countries like the U.S. may face shortages in certain cases: when a lot of blood is needed locally after a natural disaster or shooting, for example. Certain blood-derived products may also still be rare. Platelets, for example have a very short shelf life; Type O blood, the "universal donor," is also rare.

In total, across all 107 countries with insufficient supply, the deficit added up to 100 million units of blood. Of those, 41 million were needed in India, the country with the biggest overall deficit.

Delaney says the findings challenge the World Health Organization's long-standing rule of thumb that countries should aim to collect 10-20 unit donations annually per 1,000 people. Most of the countries facing a blood deficit have not met that target — but even that target may be too low, Delaney says. For more than 40 countries, the need was actually at least 30 unit donations per 1,000 people, according to the study.

"One country might have a lot of malaria or a lot of liver disease or a lot of inherited blood diseases," she says. "And that matters. How can the country plan and prepare if they don't really know how much blood they need?"

Tagny, in Cameroon, says on-call emergency blood donations have an elevated risk of transmitting hepatitis or other infections between donor and recipient, because when a patient's life is on the line lab technicians may not have time to carry out the full battery of safety tests.

But the impact of the blood gap goes beyond saving lives in emergency situations, says Evan Bloch, a pathologist at Johns Hopkins Bloomberg School of Public Health, who was not involved in the study. Treatment for some long-term or chronic conditions — cancer, sickle cell disease, HIV — also deteriorates when blood is unavailable.

"There's a massive blood deficit in low- and middle-income countries, and what's happening is that practice is being driven accordingly," he says. "If you look at a high-income country like the U.S., oncology would be a major user of transfusion. But what's happening [in lower-income countries] is they simply don't have the capacity to manage the bulk of oncology. You can't do complex surgeries. They simply don't have the ability to do anything which maybe could have been innovative and novel because there isn't this transfusion reserve."

Julie Makani, a hematologist at Tanzania's Muhimbili University of Health and Allied Sciences, says while the deficit is severe, it's slowly improving. Ironically, part of the reason for the improvement, she says, was the HIV epidemic: Fears among public health officials that blood transfusions could transmit the disease led to increased investment in blood testing and storage equipment.

Public education campaigns in public schools about blood donation are also more common than they once were, she says. But raising awareness may have a limited impact, she adds, if blood drives, which are expensive to carry out, don't become more commonplace. There may also be an important role for technology, she says: In Ghana and Rwanda, remote-controlled drones are now being tested for delivering blood to remote clinics.

Still, Bloch cautions, for developing countries that are dealing with a complex range of public health challenges, "blood transfusion is just at the bottom of a laundry list of a thousand other things."