Accessibility links
Meet The Filmmaker Reinventing How African Women Are Portrayed In Movies : Goats and Soda Two deeply personal films from Cameroonian Rosine Mbakam won critical acclaim in the U.S. by grappling with how families maintain traditions in a time of global migration and generational change.

Meet The Filmmaker Reinventing How African Women Are Portrayed In Movies

Meet The Filmmaker Reinventing How African Women Are Portrayed In Movies 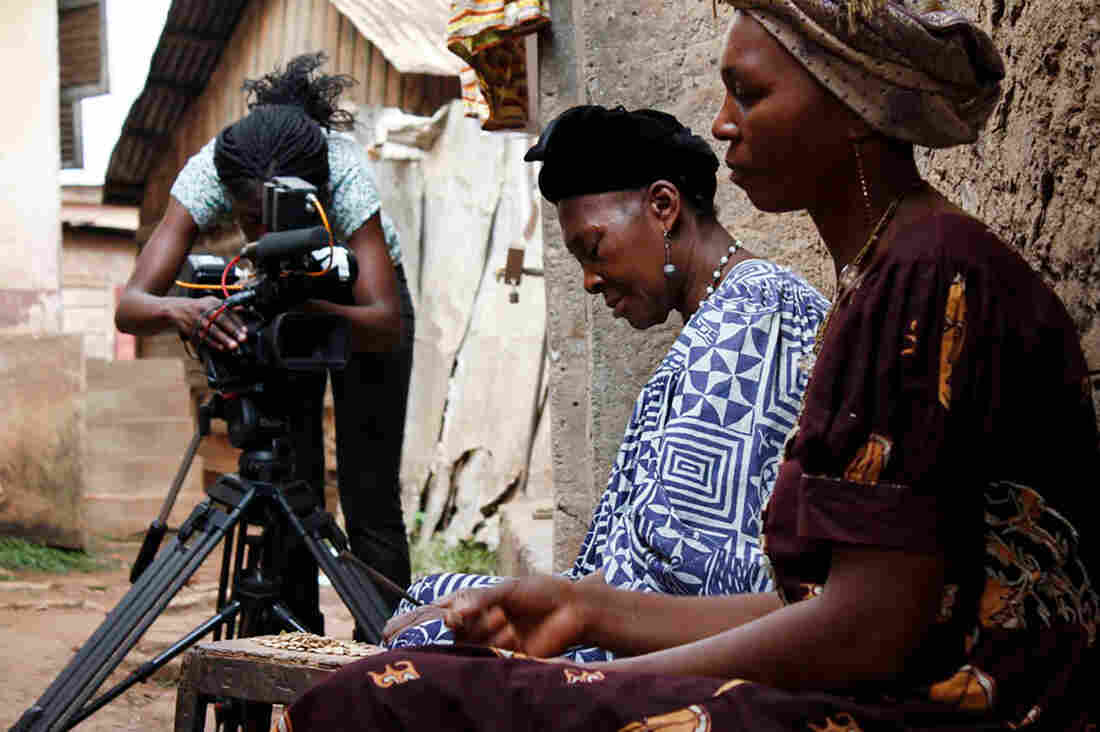 Rosine Mbakam, left, says she chose to shoot all images and sound herself to maintain an equal relationship with the subjects of her films. Icarus Films hide caption 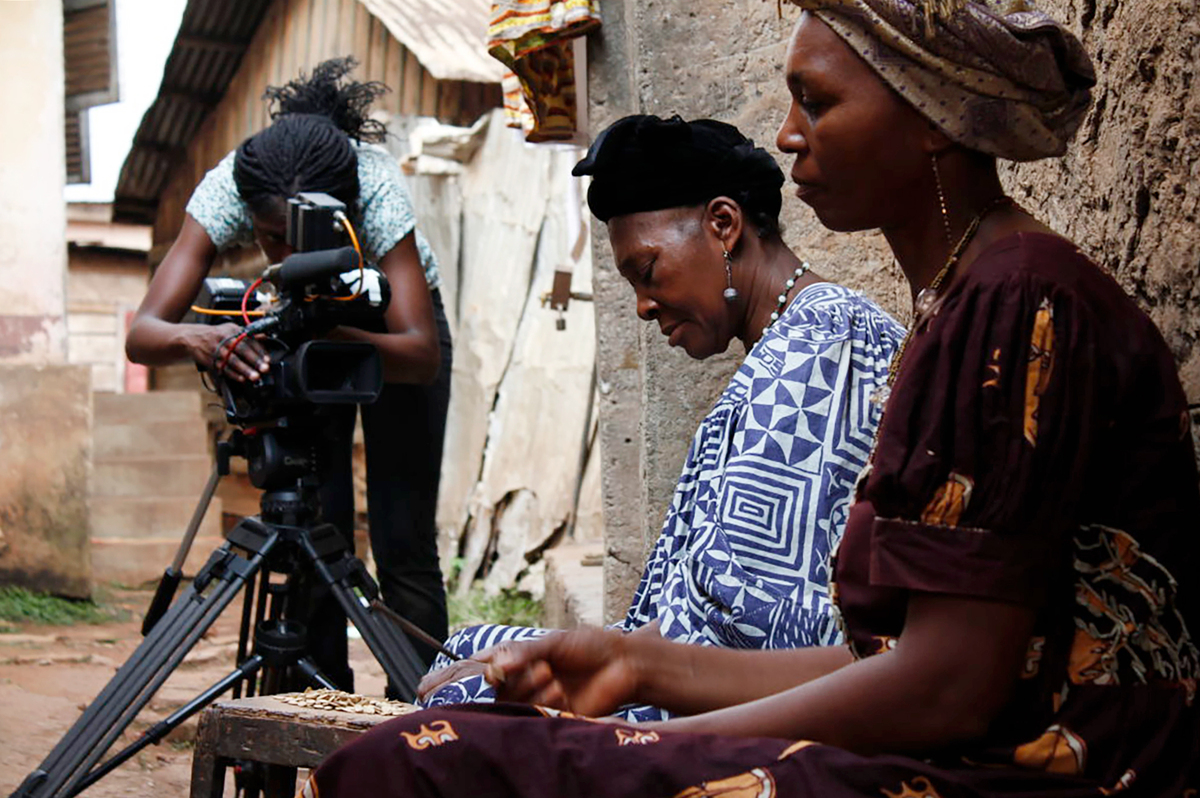 Rosine Mbakam, left, says she chose to shoot all images and sound herself to maintain an equal relationship with the subjects of her films.

In Cameroon's Bamiléké culture, a woman gives birth to her child surrounded by the entire family. The following days are filled with post-birth customs and traditions.

Rosine Mbakam, a Cameroonian filmmaker, did not get to experience these traditions. She gave birth to her first son in Belgium in 2012, alone in the hospital with her husband. Thinking about her family back home, she started crying, she says now. And then, after some time, she began writing.

The result, The Two Faces of a Bamiléké Woman, is a documentary chronicling Mbakam's return to Cameroon for the first time in seven years, since she first left to study film in Belgium in 2007. Coming back as a wife and mother, she engages the women in her family and her community of the Bamiléké ethnic group in conversations about their rituals and experiences. The two faces in the title, she explains, represent their two generations — what they share, how they differ and what they can still learn from one another. 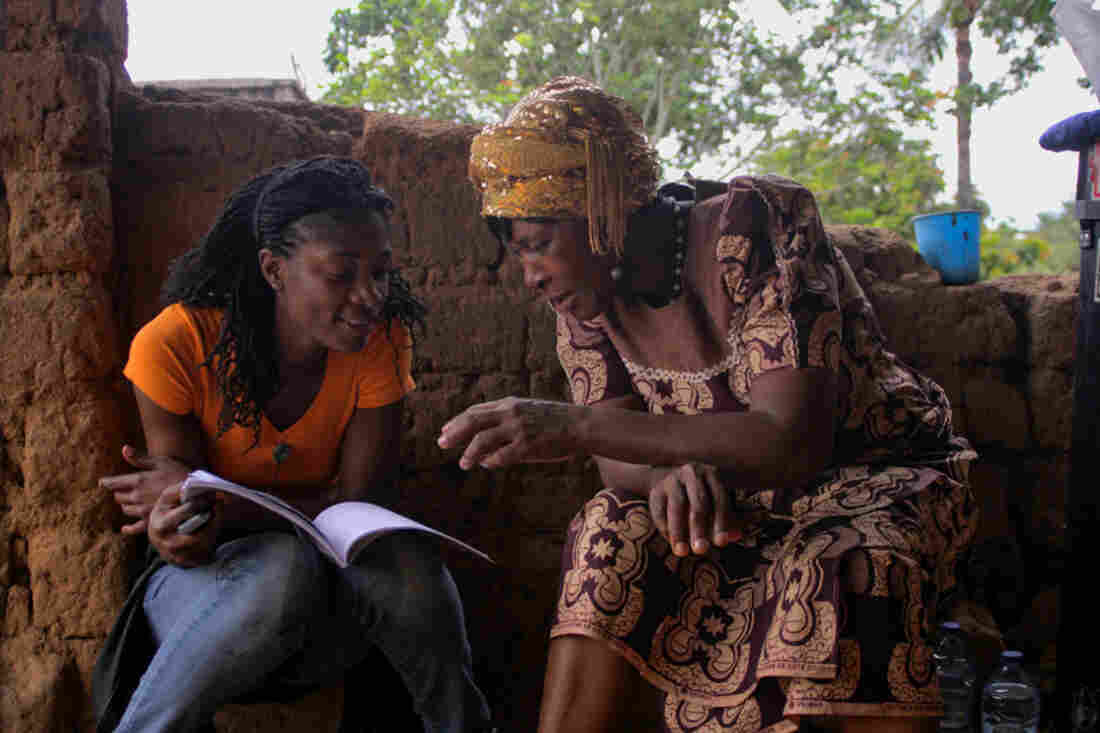 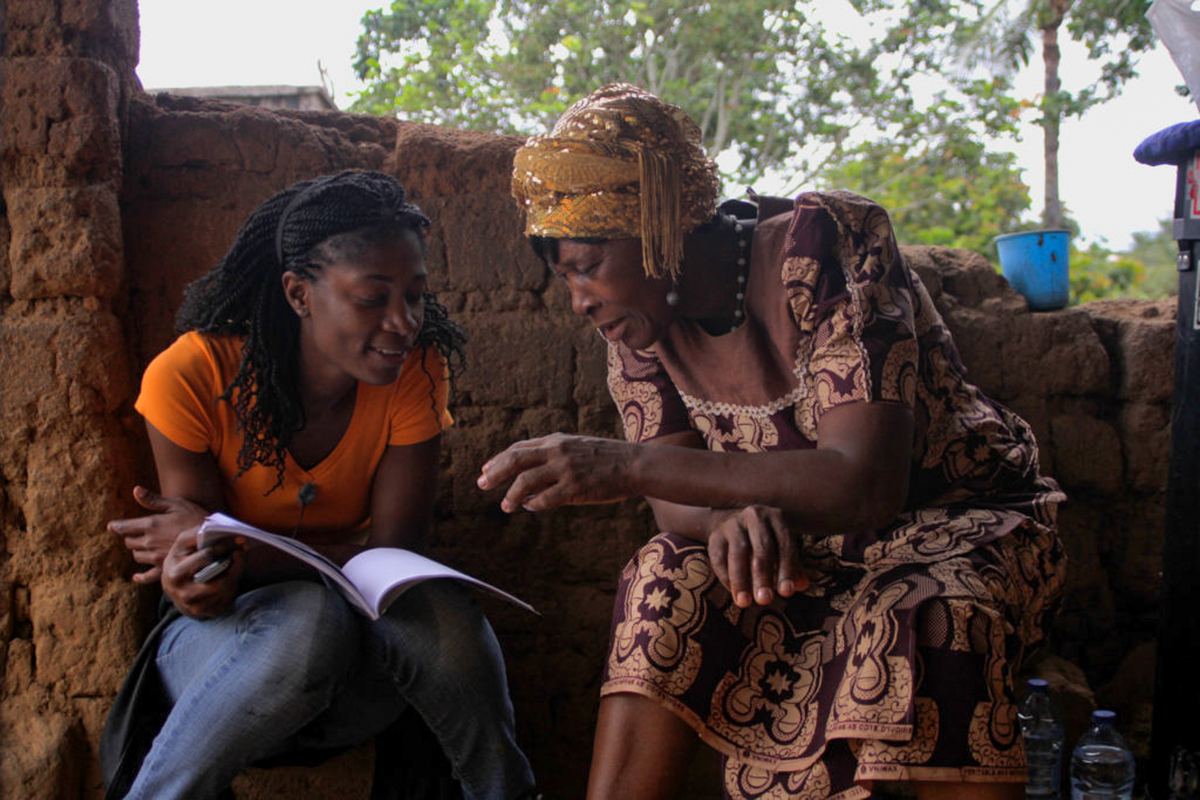 Rosine Mbakam (left) and her mother on the set of 'The Two Faces of a Bamiléké Woman,' which represents their intergenerational differences.

The film was first released in Europe in 2016, but did not make its U.S. debut until this year alongside its follow-up from 2018, Chez Jolie Coiffure. Mbakam premiered both films in a series of screenings across the country this fall, receiving critical acclaim from The New Yorker and The New York Times along the way.

In one scene of The Two Faces of a Bamiléké Woman, Mbakam's mother and aunt reflect on their marriages: having a husband who took multiple wives, being forced to get married at 14, feeling afraid and uncertain of their futures.

"I was surprised to hear that because I always saw my mother and her sister just be happy," Mbakam says. "I didn't know that behind that happiness there were some scars."

From behind the camera, Mbakam asks them if they think she's broken tradition by marrying a European man; they tell her no, as long as she's in love and she's happy. They also talk about the practice of rolling a warm stone over the bodies of young girls who are developing "too early" to stop their breasts from growing, which Mbakam recalls from her early adolescence.

She does not criticize or look down on these customs — she inquires and then gives the women space to share their perspectives. She explains that this dynamic is important to her as an African filmmaker because it asks the audience to shift their gaze and identify with her mother and the other Bamiléké women in the film. After growing up without ever seeing herself or her story in mainstream media, Mbakam finds power in switching gears and providing on-screen representation that is for Africans, by Africans. 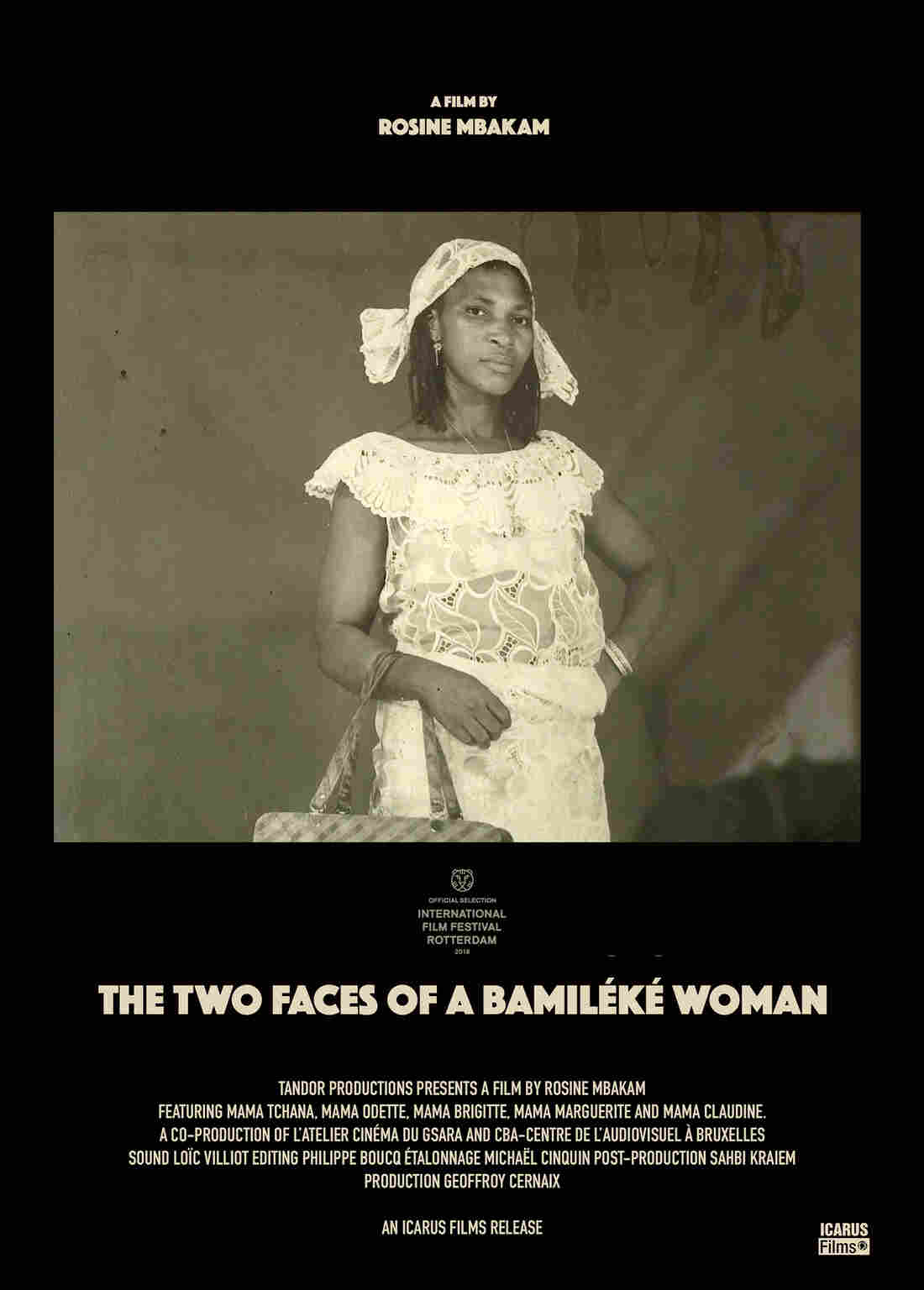 'The Two Faces of a Bamiléké Woman' premiered across Europe in 2016 before making its U.S. debut this year. Icarus Films hide caption 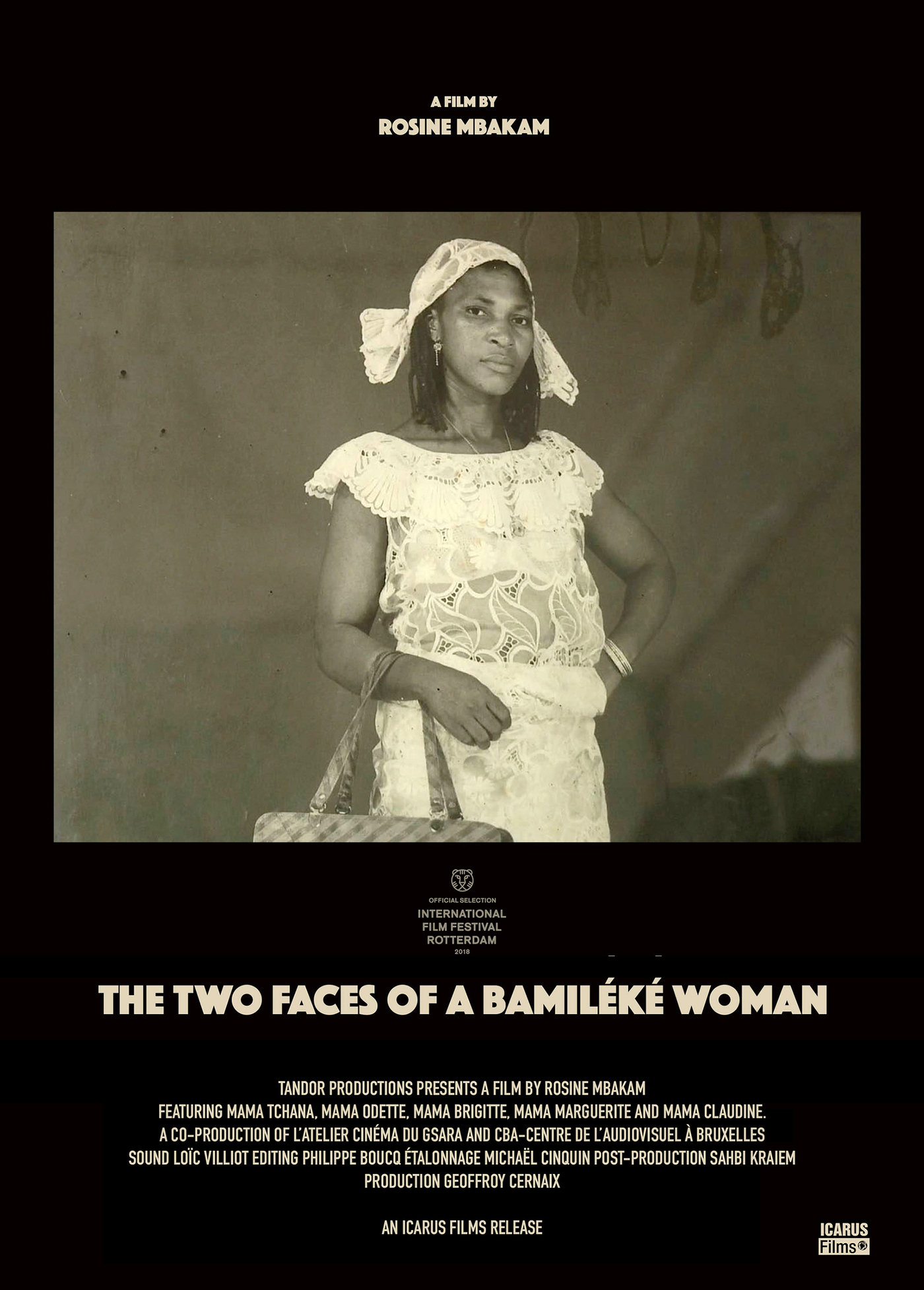 'The Two Faces of a Bamiléké Woman' premiered across Europe in 2016 before making its U.S. debut this year.

"My intention as a Cameroonian filmmaker is to decolonize myself from what I have learned from film and from what I have seen," she says. "African cinema is colonized by other forms of cinema. It is important for me to free myself from all this to find a form that is fair to the people I film."

In another scene, she goes to the market where her mother has a stand selling fish. As her mother wraps fish in newspaper, Mbakam reflects on their differences. To her mother, the newspaper is just a practical object that allows her to conduct her business. For Mbakam growing up, reading the newspaper provided an escape — a window to the world outside of the market and Cameroon.

But as they sit together, a surprising thing occurs: Mbakam's mother sees a picture of the president in the newspaper and brings up the political situation of Cameroon, a topic that Mbakam has never heard her discuss before.

"I always talk about politics with my friends because we usually do that in school. But my mother is not an 'intellectual.' She didn't go to school," she says now. "I want to show that I'm coming from a context where people don't intellectually know things, but there [is still] value [in] her point of view, her gaze of the world, her reality." 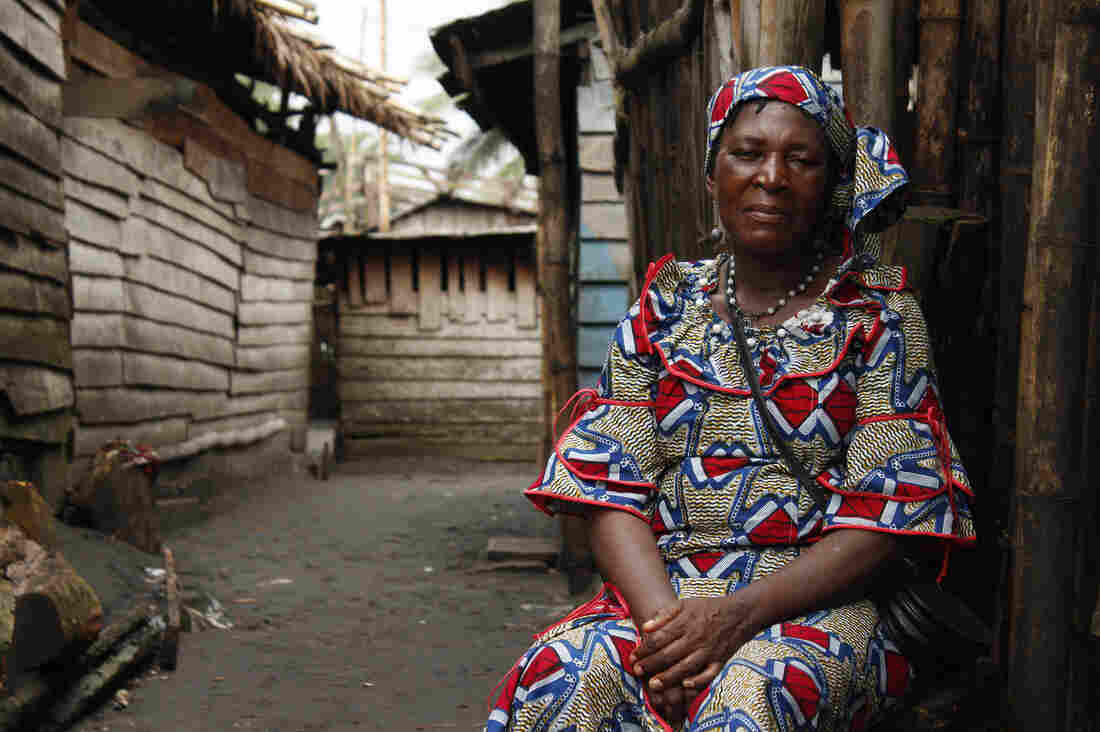 Rosine Mbakam hopes her films challenge viewers to align themselves with the experiences of women like her mother (pictured above), who she says are usually excluded from mainstream media. Icarus Films hide caption 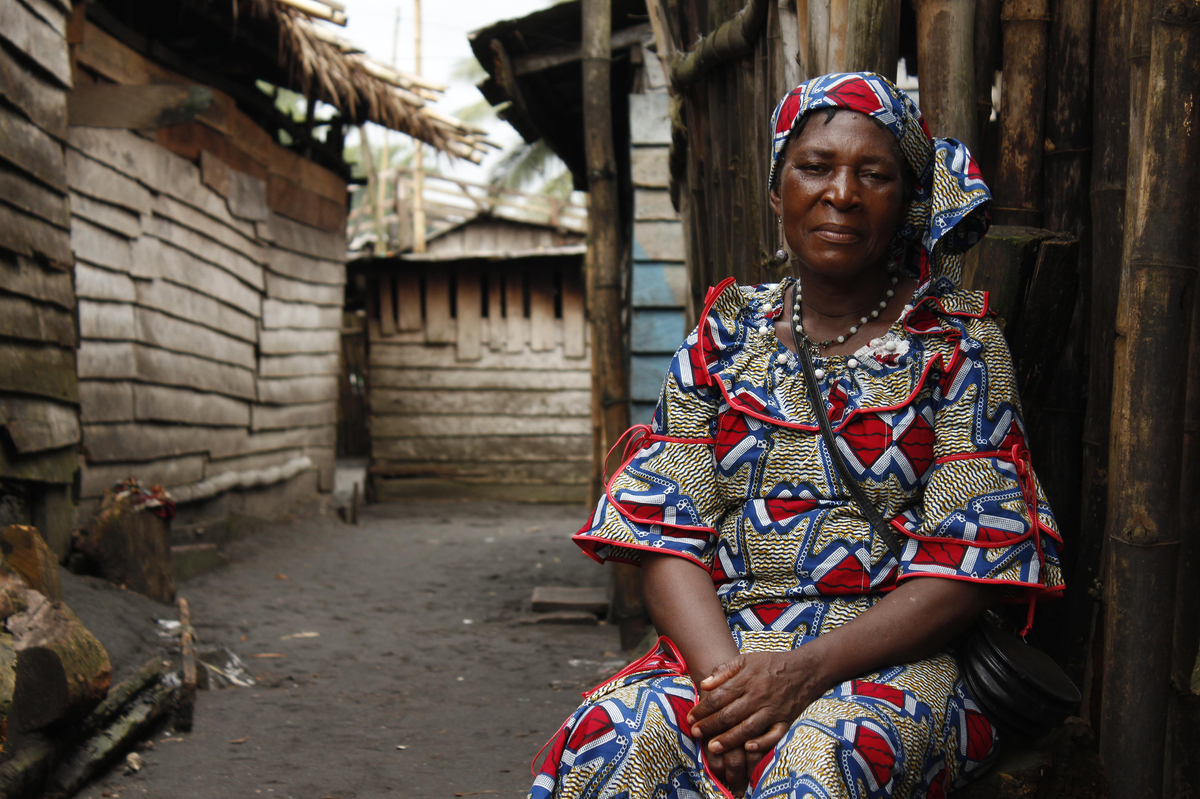 Rosine Mbakam hopes her films challenge viewers to align themselves with the experiences of women like her mother (pictured above), who she says are usually excluded from mainstream media.

She also visits her mother's all-female "tontine," a group in which participants all pool their funds together to help one another overcome certain financial obstacles. This tontine began out of her house when she was a child, says Mbakam, until it raised enough money to have a separate space to meet. She shows the members running a meeting before transitioning into a sequence of all the women lined up together, while Mbakam's voice-over recites Maya Angelou's poem, "Woman Work."

She explains that this scene was important to her because the tontine was a crucial part of her ability to go to school and eventually leave Cameroon to become a filmmaker.

This theme of resilience and female independence continues into Mbakam's second film, Chez Jolie Coiffure, which takes place entirely inside the hair salon run by a Cameroonian woman named Sabine, in Brussels. The documentary captures the way in which this salon provides a safe space of community and support for African migrant women, while also revealing the struggles their community faces. 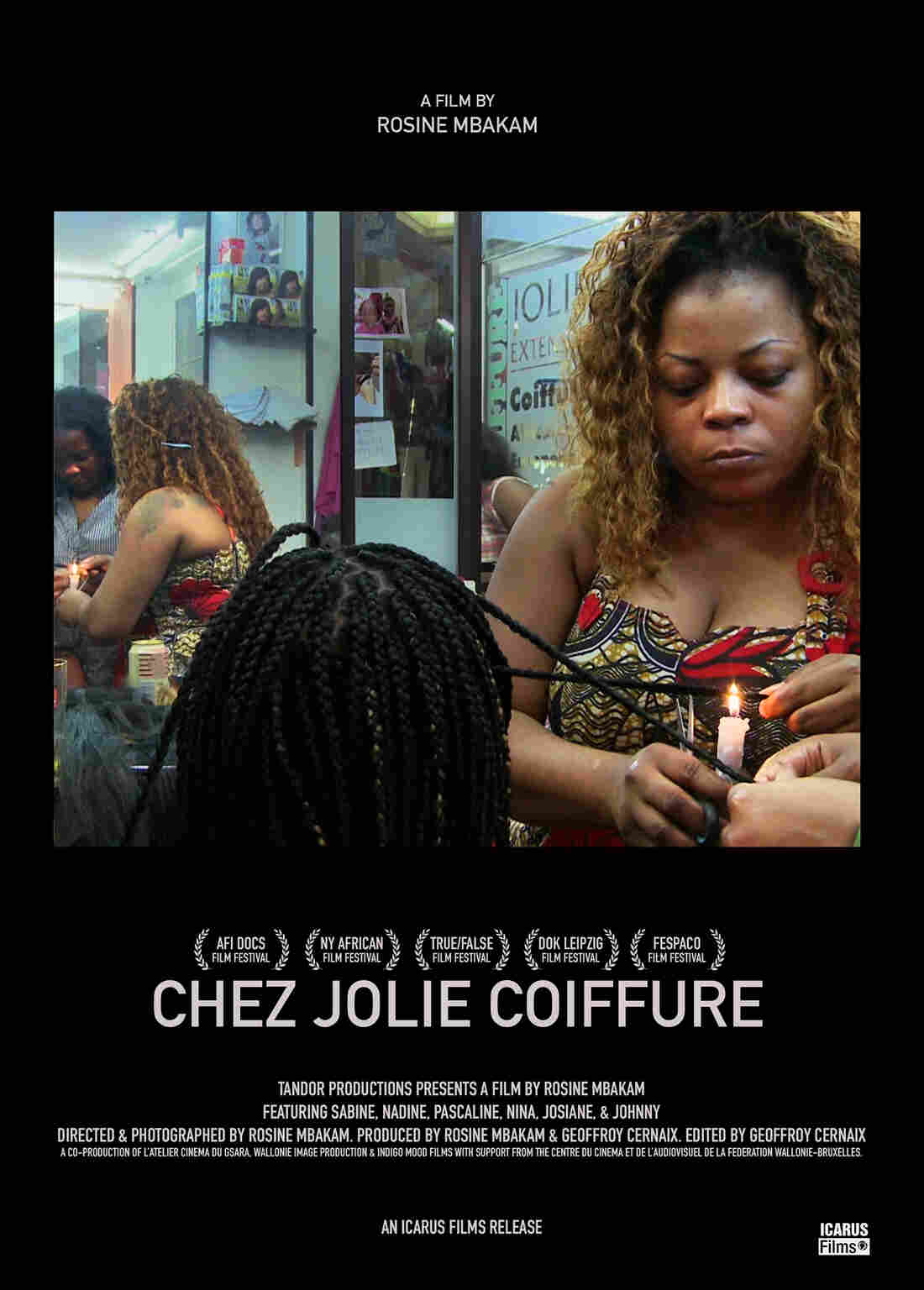 In 'Chez Jolie Coiffure,' a hair salon in Brussels becomes a point of community for migrant African women who have left everything behind in search of new opportunities abroad. Icarus Films hide caption 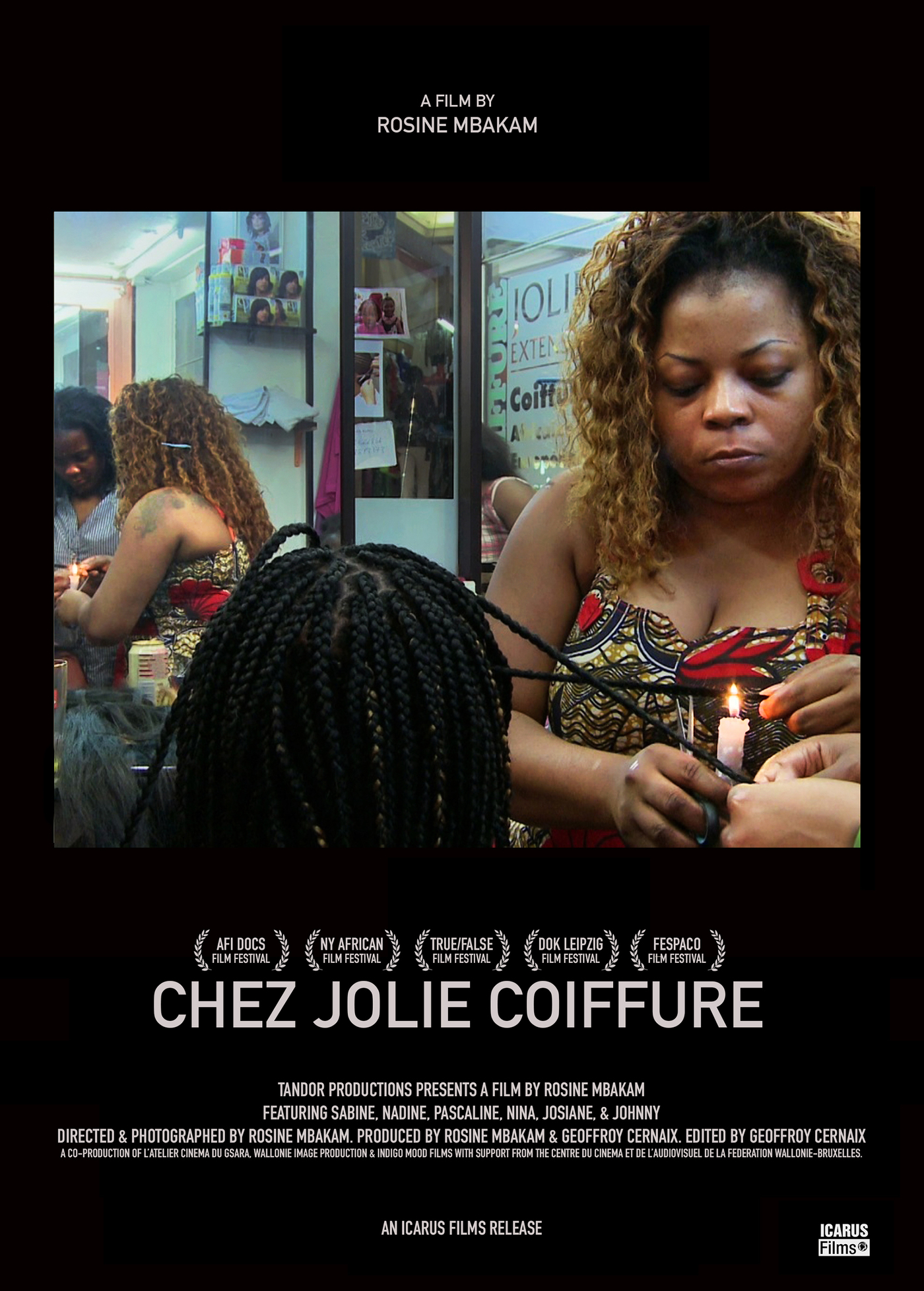 In 'Chez Jolie Coiffure,' a hair salon in Brussels becomes a point of community for migrant African women who have left everything behind in search of new opportunities abroad.

In one scene, the salon enters into a panic at the news that police have arrived to do an immigration raid in the shopping center where the business is located. Sabine, who is undocumented, shuts off all the lights before running out of the door. She was okay in that instance — but in February of this year, says Mbakam, Sabine was detained by police over her immigration status. She's been released since then, and often presents the film at screenings alongside Mbakam — or alone, if Mbakam is traveling — in order to engage with the audience directly.

"The West has long filmed Africa with condescension and superiority," says Mbakam. "It is important that Africa looks at itself, questions itself and speaks to itself in order to consider freeing itself."