Accessibility links
Delhi Canceled School Due To Smog — But A Children's Race Still Happened : Goats and Soda Even though the Delhi government has urged folks not to exercise outdoors, a "Race for Children" still took place. The Twittersphere was outraged.

This Week, 2,000 Children Ran A Race Through The Gray Smog Of Delhi

This Week, 2,000 Children Ran A Race Through The Gray Smog Of Delhi 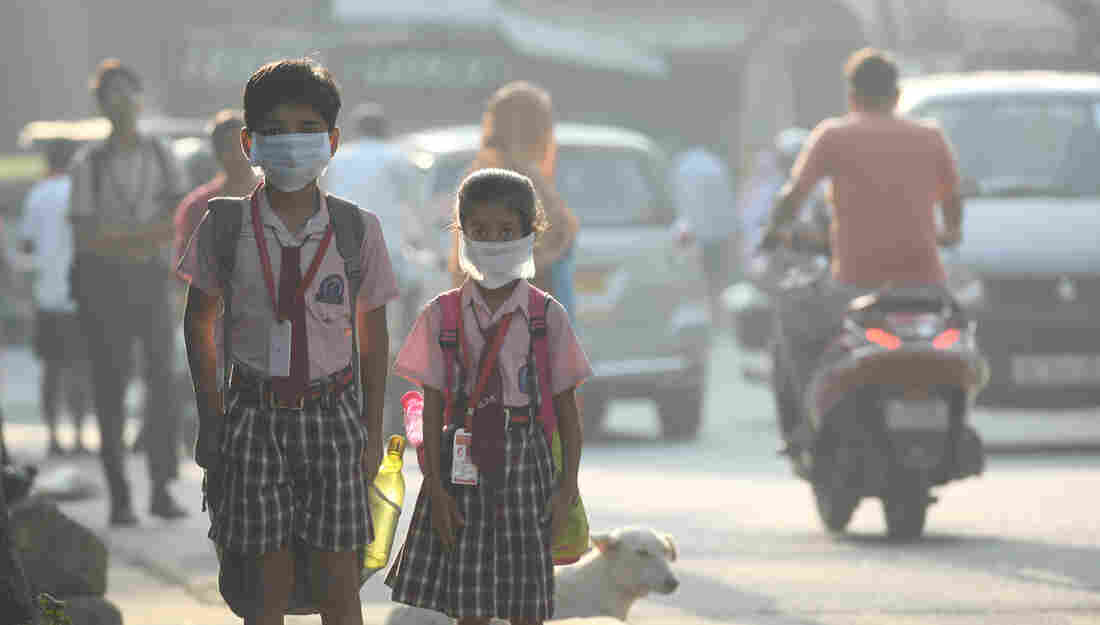 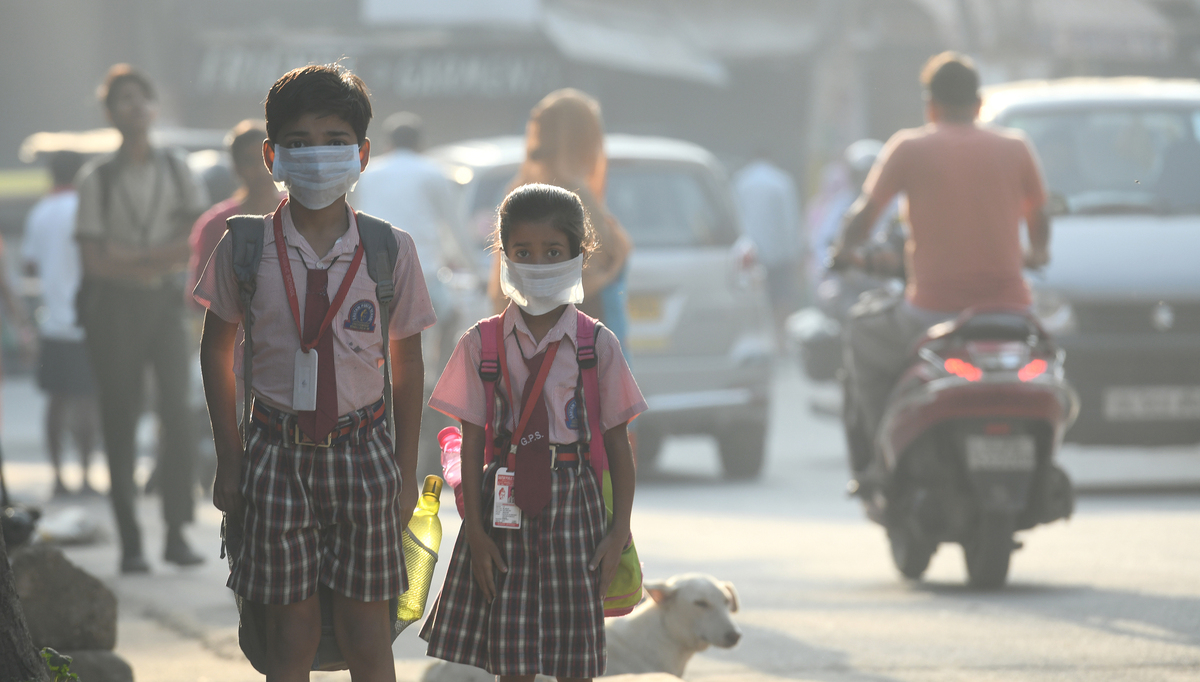 Students cover their faces with masks to protect themselves from air pollution in Delhi.

For days, air quality monitoring stations across New Delhi have been flashing a dark red reading — severe — the worst of six categories. The level of tiny particulate matter in the air this week was more than nine times what's considered safe to breathe. The smog has forced the government to close schools for two days.

Health advisories issued by the Delhi government ask people to not go jogging or do any kind of outdoor exercise.

But organizers of a children's fun race thought it was OK to make kids run in those conditions.

Pictures on social media showed scores of youngsters running through a gray haze early Thursday morning while adults took pictures and cheered them on. The children were wearing runners' bibs with numbers — but no anti-pollution masks.

The annual "Run for Children," as it's called, was organized to mark Children's Day in India, celebrated on Nov. 14 each year — the birthday of Jawaharlal Nehru, the country's first prime minister.

Some 2,000 mostly underprivileged children took part in this year's event, according to Vishwajeet Ghoshal, director of the nongovernmental children's charity Prayas, which organized the event.

"It was decided to do [a] symbolic run for a very short distance," Ghoshal told NPR in an email. "There was no instruction from any agency to close the program."

Eminent personalities from the media, sports and corporate world as well as senior government officials were present, Ghoshal added.

Twitter users pointed to the irony that the event was sponsored by a children's NGO and a life insurance firm.

Wait, what??? Schools are forcibly closed due to horrendous, deadly air and someone thinks it’s a good idea for children to RUN in this murk??? #insane https://t.co/H1MFoGk5r1

Others shared her sentiments.

Strange way to check population control by killing off our young. Our political worthies are just too brilliant. https://t.co/Fw2kh0ITJh

Whoever organised this run should be identified and held accountable for putting children at serious health risk. pic.twitter.com/LmxoiAUprr

Air pollution spikes in Delhi every autumn when farmers in the northern Indian states of Punjab and Haryana burn the residue of crops after harvest, sending clouds of smoke wafting across the region. That coincides with Diwali, the Hindu festival of lights, which people celebrate by setting off firecrackers, adding to the smog. Vehicle fumes and smoke from factories further exacerbate the situation.

"It was silly and criminal to make kids run in this pollution," Dr. Anupam Sachdeva, a Delhi-based pediatrician, tells NPR.

In the long run, taking deep breaths of smoggy air can damage children's developing lungs, Sachdeva says. In the short term, it could cause a medical emergency in kids prone to asthma or any other respiratory conditions, he adds.

According to a study by the Kolkata-based Chittaranjan National Cancer Institute and the World Health Organization, nearly half of Delhi's kids already have irreversible lung damage.

Former Delhi resident Padmapriya D, 33, saw with horror the impact Delhi's air was having on her 4-year-old daughter.

"Every winter she would get these really bad bouts of bronchitis and severe wheezing," says Padmapriya. Doctors told Padmapriya her daughter could develop asthma if she continued to stay in Delhi. Earlier this year, the family moved to Hyderabad in southern India.

One tweet after the race endorsed her plan to get out of town.

Doctors are saying to live longer children should "Run away from Delhi" not "Run in Delhi"! https://t.co/d8CgdTBIAx