Accessibility links
Infecting Mosquitoes With A Bacteria Could Help In The Battle Against Dengue : Goats and Soda Scientists are trying to flip the script on control of mosquitoes in an effort to combat dengue fever. Instead of trying to wipe them out, they're infecting them with bacteria. 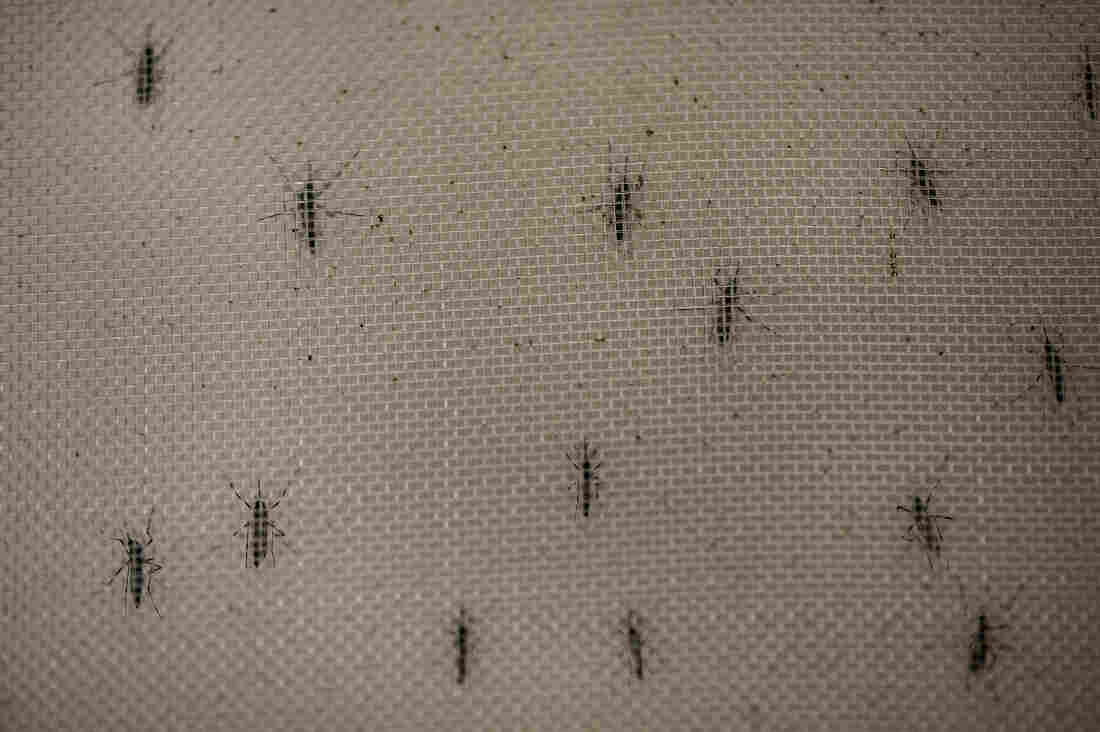 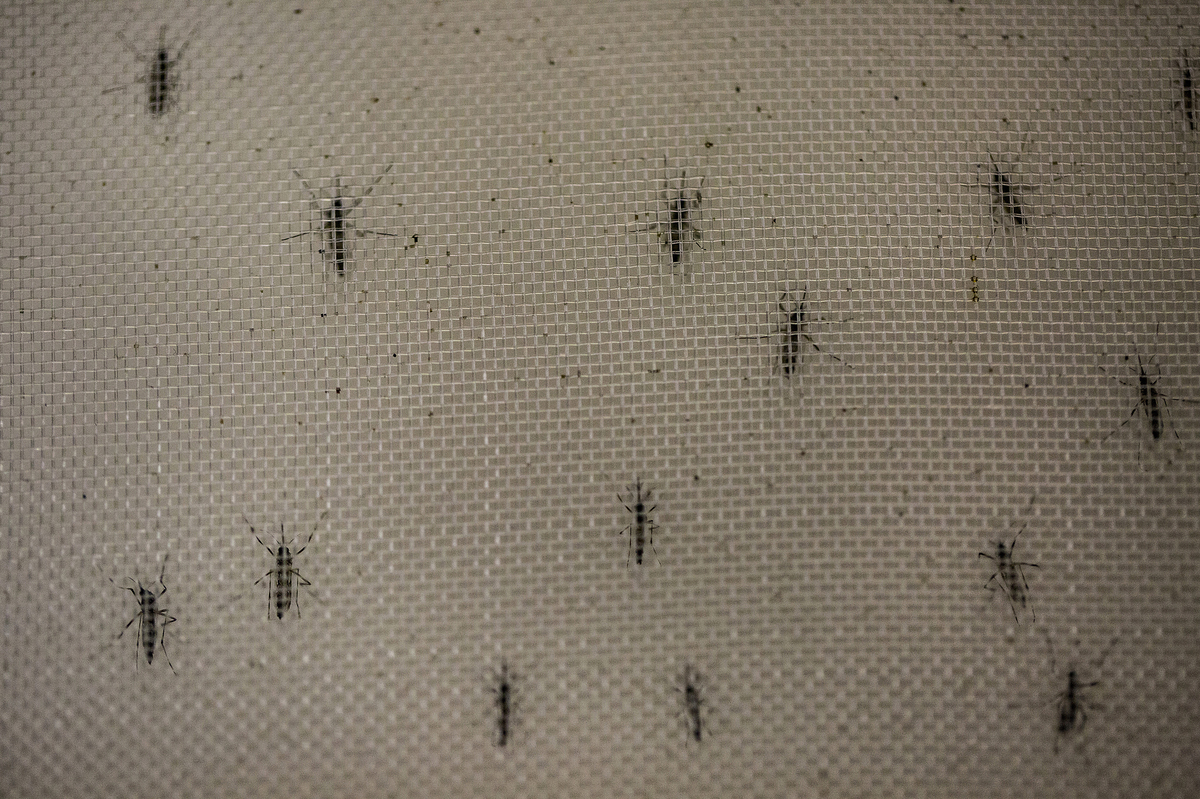 Aedes aegypti mosquitoes infected with the Wolbachia bacterium, which appears to block transmission of dengue fever and other mosquito-borne viruses.

Cameron Simmons is far more familiar with dengue than he would like to be.

Unfortunately, last year nearly 400 million people experienced the viral disease that is so painful it's often called break-bone fever. There's no specific drug to treat the infection; medication is given only for the fever and other symptoms. Severe cases, although rare, can be fatal. And the only licensed vaccine has run into concerns about its safety.

In tropical places where dengue is rampant, annual outbreaks are a huge burden on health clinics.

Simmons is the director of the impact assessment team for the World Mosquito Program. He and his colleagues are trying to make a dent in this persistent disease.

So instead of the old method of trying to trap and kill all the dengue-carrying mosquitoes, the World Mosquito Project is doing the opposite. Scientists are cultivating and releasing mosquitoes, except these mosquitoes are special: They've been infected with a bacterium called Wolbachia.

Wolbachia occurs naturally in many insects, but not normally in Aedes aegypti mosquitoes, which spread dengue. It has to be introduced into the mosquitoes in the lab. But then the bacterium is passed down to future generations. The bacterium appears to block Aedes aegypti from transmitting arboviruses, which include dengue as well as chikungunya, yellow fever and Zika.

A Guide To Mosquito Repellents, From DEET To ... Gin And Tonic?

"We don't see any change in the population size of the mosquitoes. And they still bite us. So unfortunately we don't solve that problem," Simmons says, laughing. "What we do is solve the problem of those mosquitoes being transmitters of these medically important diseases."

This week, at the American Society of Tropical Medicine and Hygiene annual meeting, Simmons is presenting results of several trials his group is conducting around the world.

"In Indonesia, we've [released Wolbachia-infected mosquitoes in] a community of 50,000 people and compared it to a community that was left without Wolbachia," he says. "We've seen a 75% reduction [of dengue cases] over the last 2 1/2 years in the Wolbachia-treated community."

He says in laboratory studies the group has been able to use this bacterium to completely stop dengue transmission.

The problem in the real world is that other people and other mosquitoes keep migrating into the areas being treated, messing up the experiments. But from a theoretical perspective Simmons sees Wolbachia as potentially a way to wipe out dengue entirely.

"If you had a big island," he proposes, "[and] you stop people from moving in and out of that island, and you put Wolbachia across all the mosquitoes on that island, the science suggests that you'll eliminate dengue in that location."

Some countries are trying to do just that. Australia started using Wolbachia-infected mosquitoes nearly a decade ago to control outbreaks of imported dengue in the state of Queensland.

This year the government of Malaysia launched a campaign called "Wolbachia Malaysia" to attack dengue. This campaign isn't affiliated with Simmons' group, the World Mosquito Program. It uses a different strain of the bacterium but is trying to do the same thing — make the mosquitoes incapable of spreading these viral diseases.

The Wolbachia technique doesn't work with malaria, which is driven by parasites and transmitted by a different kind of mosquito.

This year there's been a record number of dengue cases in the Americas, according to the Pan American Health Organization. Brazil has had more than 2 million cases since the beginning of the year.

"It's amazing. Aedes aegypti is adapted very well to the Brazilian situation," says Luciano Moreira from the Fiocruz Foundation in Brazil. Moreira is also the lead scientist in the country for the World Mosquito Program.

"Aedes aegypti is everywhere," he says. "They can live even in high-rise buildings and in vases and plant pots. Even in a very small amount of water, they will be there and they can survive."

The World Mosquito Program is currently deploying Wolbachia-infected mosquitoes at two sites in Brazil — in Rio de Janeiro and the nearby city of Niterói.

But dengue comes in waves.

Unfortunately from a research perspective, there wasn't much dengue in those areas of Brazil in 2018. But what WMP did see was a big impact on chikungunya.

"We are getting like 70%, 75% less cases [of chikungunya] where Wolbachia has been established," Moreira says.

His daughter contracted dengue in 2016 in the city of Belo Horizonte, the capital of the Brazilian state of Minas Gerais.

"She was ill for 10 days, really bad in bed," he says. "So for me, having the potential of bringing a solution to the community is something that I dream about."

The next place Moreira and his colleagues at WMP are going to deploy their bacteria-infected mosquitoes is Belo Horizonte.