Accessibility links
Mumbai's Disappearing Mangroves: A Weapon Against Climate Change Is Under Threat : Goats and Soda Studies show that the city lost nearly 40 percent of its mangroves between 1991 and 2001 — about 9,000 acres. And rapid urbanization continues to threaten them.

Mangroves Help Fight The Effects Of Climate Change. So Why Is Mumbai Destroying Them?

Mangroves Help Fight The Effects Of Climate Change. So Why Is Mumbai Destroying Them? 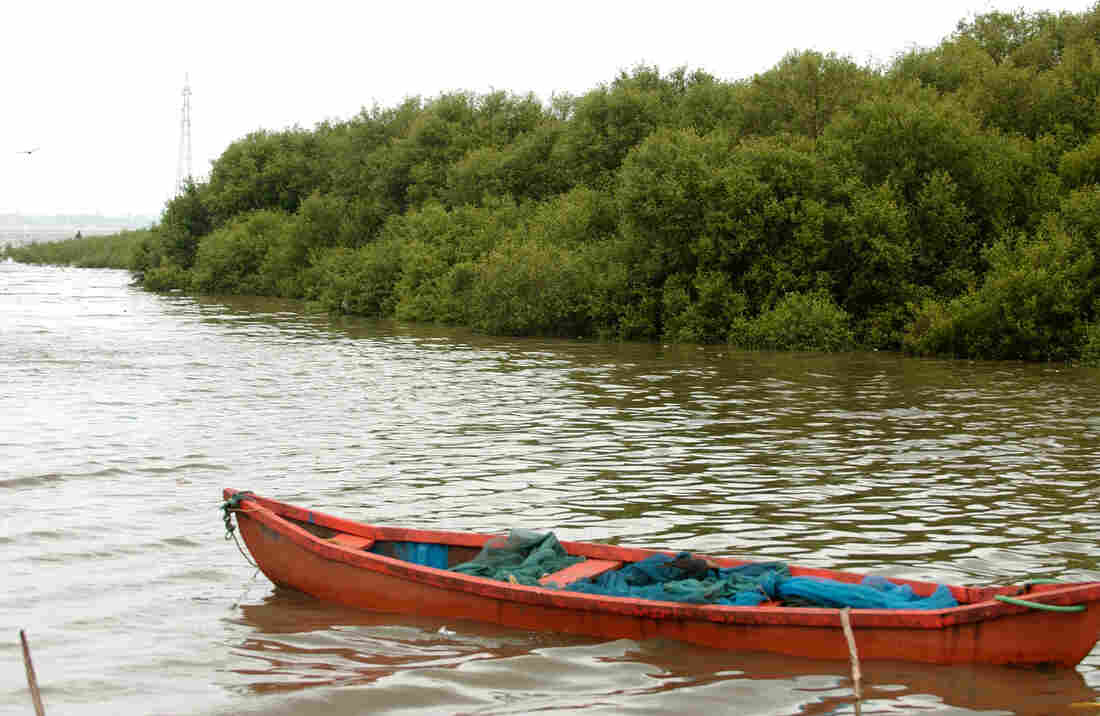 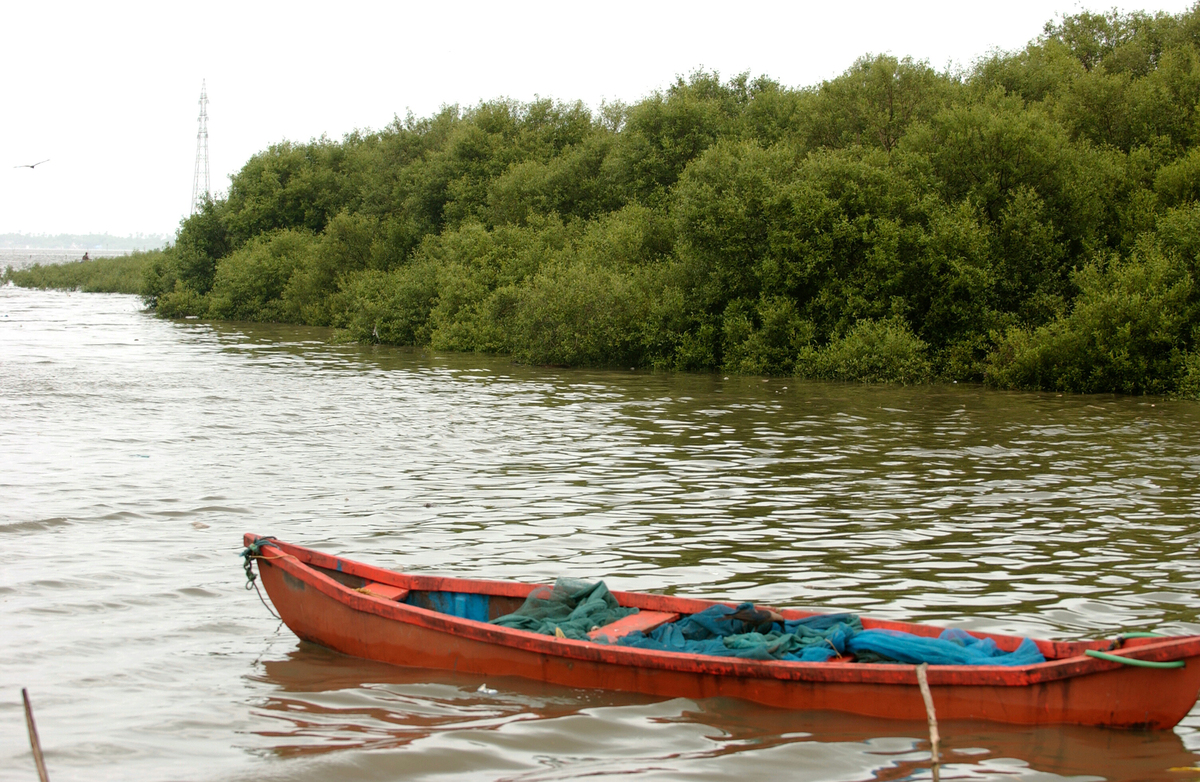 Mangroves by the water in Mumbai.

Bare trees with slender branches line a half-built highway overpass in eastern Mumbai. These are mangroves, trees or shrubs found in tropical swampy marshland with roots that grow above the ground. But construction has blocked their lifeblood — salt water. Their aerial roots poke through dry, caked mud instead of brackish water.

Environmentalist B.N. Kumar points to a small channel under the highway where seawater once entered the mangrove patch. It's now littered with rocks and construction debris.

"All the mangroves, about 5,000 of them, have dried up. They can only be used as firewood now," Kumar says. "It's very sad to see these mangroves dying like this."

The roots of mangroves, poking through swamp mud, serve as breeding areas for fish.

Thousands of acres of velvety green mangroves line the border between the Arabian sea and the city of Mumbai in western India. They act as natural buffers against coastal erosion and flooding, and they store up to four times as much carbon as other forests. With sea level rise inevitable, Mumbai's mangroves are more important now than ever. A new report by climate change researchers predicts much of Mumbai, which is India's financial capital, will be underwater by 2050 if global carbon emissions aren't reduced. The city, originally a cluster of seven islands, is especially vulnerable. Many parts of it have been built by reclaiming land from the sea.

Studies show that Mumbai lost nearly 40 percent of its mangroves between 1991 and 2001 — about 9,000 acres. And rapid urbanization continues to threaten them.

A short car ride from the dried mangroves along the highway, a municipal garbage truck dumps trash on the edge of a mangrove patch. Sludge and plastic waste cover the roots of the mangroves, slowly choking them. In another area nearby, hundreds of acres of mangroves are being cut for the construction of the Navi Mumbai international airport.

Mangroves (green) were plentiful in this Google Earth image from Nov. 12, 2003 showing the site of the future Navi Mumbai International Airport (left). By Nov. 12, 2019 (right), the development work for the airport had wiped out hundreds of acres of mangroves. Google Maps hide caption

Mangroves (green) were plentiful in this Google Earth image from Nov. 12, 2003 showing the site of the future Navi Mumbai International Airport (left). By Nov. 12, 2019 (right), the development work for the airport had wiped out hundreds of acres of mangroves.

One of India's most glamorous infrastructure projects, the country's first bullet train — which will run between Mumbai and Ahmedabad, in the western Indian state of Gujarat — is estimated to destroy at least 32,000 mangroves.

Journalist-turned-activist Kumar, who runs a blog called The Nature Connect, has raised concerns about mangrove destruction with authorities, including the Japanese government agency that is helping build the bullet train. Kumar and other activists organized an exhibition in Mumbai earlier this year displaying large posters about the environmental impacts of such projects.

Kumar says environmentalists are often branded as anti-development, especially when they oppose projects like the bullet train, which, for many Indians, is a source of pride.

"We are not against any development," Kumar says. "Our question is, does it need to happen at the cost of the environment?"

People need to understand that they cannot survive without nature, says Debi Goenka, executive trustee of the Mumbai-based nonprofit Conservation Action Trust. "Just chasing the mirage of GDP growth is not development," he adds.

Authorities say they will plant five mangroves for each one that is cut for the bullet train. But activists say promises about replanting are a sham.

"There is actually no land [within the city] to replant mangroves, no suitable habitat available," says Goenka. On the rare occasion that mangrove restoration does happen, most of the saplings don't survive, Goenka adds.

With these mangroves gone, Mumbai will be left without a vital line of defense when natural disasters strike. And that has happened before.

In 2005, when the city experienced unprecedented monsoon rainfall leading to catastrophic flooding, one of the worst affected areas was a commercial hub in central Mumbai, full of shopping malls and skyscrapers. It's been constructed by reclaiming low-lying areas on the banks of the Mithi River, previously home to a sprawling mangrove forest that acted as a natural stormwater drain.

While floods were ravaging most of Mumbai, Nandakumar Pawar recalls being surprised that his fishing village in a northeastern suburb of Mumbai escaped the worst. A more than 2,000-acre stretch of mangroves nearby acted as a sponge to hold water and didn't allow it to flood his village, he says.

"That was a truly eye-opening incident for me and my community," Pawar says.

In a creek lined with mangroves in Mumbai, boats wait to take tourists to spot flamingos and other migratory birds. Sushmita Pathak/NPR hide caption

In a creek lined with mangroves in Mumbai, boats wait to take tourists to spot flamingos and other migratory birds.

As a fisherman, Pawar already knew mangroves are breeding grounds for fish, which lay their eggs on the roots. He realized mangroves were crucial not just for the fishing community but for everyone.

He started a nongovernmental group called Shree Ekvira Aai Pratishthan (named for a local deity) that has enlisted fishermen to help with mangrove and wetland conservation. When they go out to fish, they act as mangrove vigilantes. If they spot illegal activities, like debris or garbage dumping or illegal encroachment in mangrove areas, they alert the organization, Pawar says.

Authorities appear to be slowly realizing the urgency of mangrove conservation.

In 2012, the government in the state of Maharashtra, where Mumbai is located, set up a mangrove conservation unit, the first in India. The unit helps regenerate mangroves through a variety of projects, explains former range forest officer Seema Adgaonkar, as she walks through a nursery she helped set up in a northeastern suburb of Mumbai. The gnarled roots of the mangroves rise out of damp, mossy earth and pools of tidal water.

Adgaonkar rattles off the names of mangrove species that used to found in the wild in Mumbai but can only be seen in a protected nursery now. It's part of the city's first mangrove and coastal biodiversity tourism center, which offers regular tours, including flamingo safaris, to heighten awareness.

Seema Adgaonkar, 57, helped set up this mangrove nursery when she worked as a forest ranger with the state mangrove conservation unit. Sushmita Pathak/NPR hide caption

Seema Adgaonkar, 57, helped set up this mangrove nursery when she worked as a forest ranger with the state mangrove conservation unit.

The unit also deploys security officers armed with buckshot guns along the periphery of mangrove forests. The Bombay High Court ruled in 2018 that the destruction of mangroves "offends the fundamental rights of citizens," and several people have been arrested, mostly for encroachment.

But a handful of officers of the mangrove cell are not enough to save all of Mumbai's mangroves, Adgaonkar says. It's important to educate the public — especially children — about the urgency of saving these indispensable trees, she adds.

"If mangroves are saved, Mumbai will be saved," Adgaonkar says. "Otherwise, as sea levels rise, this bustling metropolis will collapse like a house of cards."