Accessibility links
India Just Passed A Trans Rights Bill. Why Are Trans Activists Protesting It? : Goats and Soda The new legislation purports to protect transgender rights — but many trans activists say it does the exact opposite. 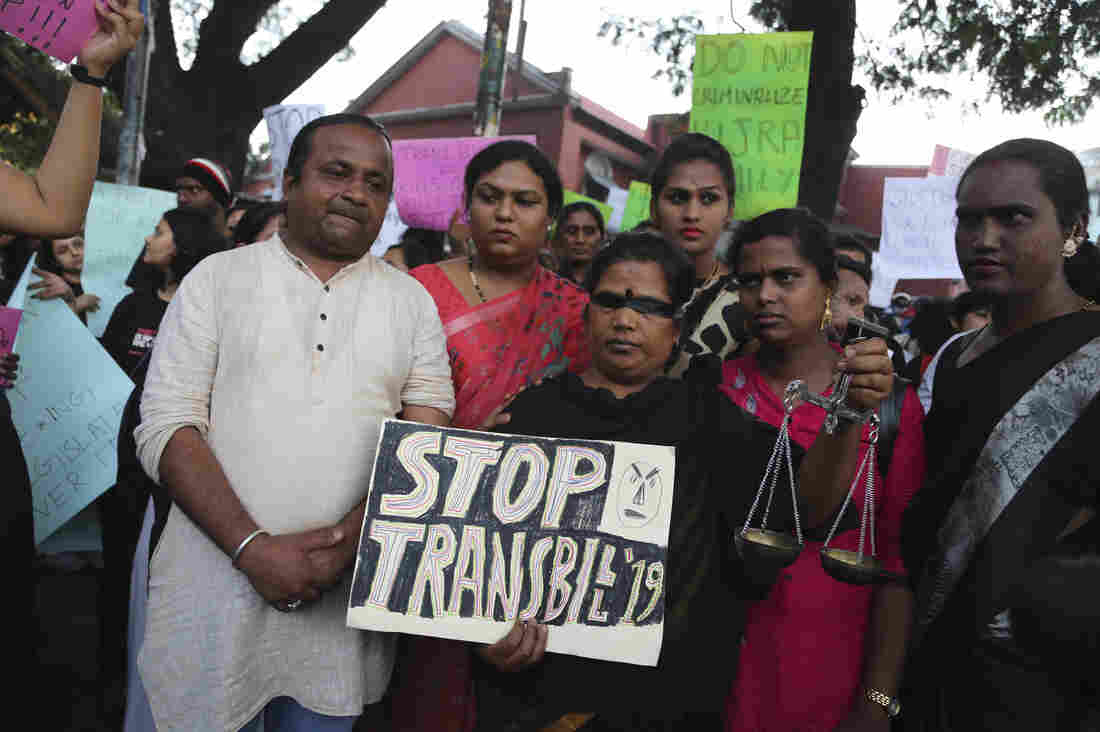 Supporters of lesbian, gay, bisexual and transgender community hold placards during a protest against passing of Transgender Persons (Protection of Rights) Bill, 2019, in Bangalore, India, Wednesday, Nov. 27, 2019. Members of the LGBT community alleged that the bill violated their rights instead of empowering them. The bill was passed in upper house of Indian parliament on Tuesday. Aijaz Rahi/AP hide caption 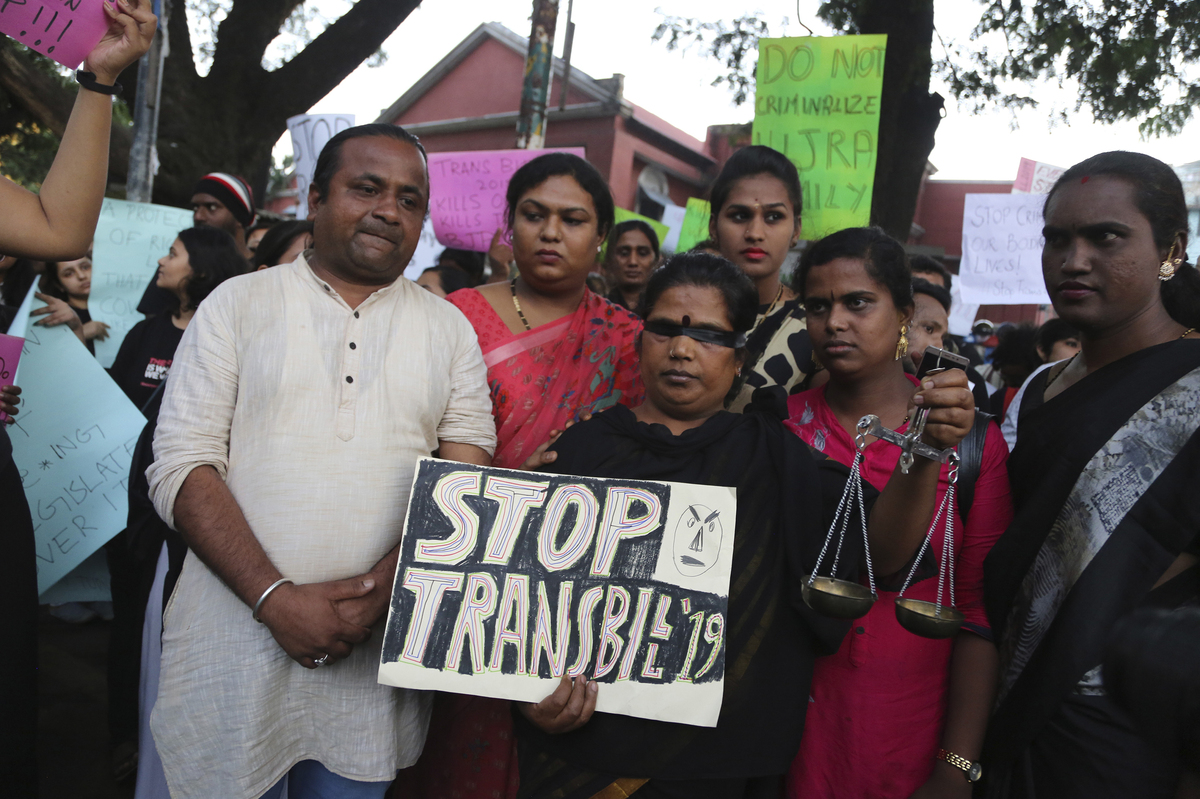 Supporters of lesbian, gay, bisexual and transgender community hold placards during a protest against passing of Transgender Persons (Protection of Rights) Bill, 2019, in Bangalore, India, Wednesday, Nov. 27, 2019. Members of the LGBT community alleged that the bill violated their rights instead of empowering them. The bill was passed in upper house of Indian parliament on Tuesday.

But the more than 1,000 people who came out on the streets weren't just celebrating India's sexual diversity. They were there to protest proposed transgender rights legislation, which they call regressive. Many participants carried placards in light pink and light blue colors — which signify trans pride — urging lawmakers to reconsider the bill.

Two days later, on Nov. 26, the bill was passed. But as the bill now moves to the Indian president's desk for signature, it has kicked off a fresh round of outrage from the very community it is meant to safeguard.

The new legislation purports to protect transgender rights — but many trans activists say it does the exact opposite. They say it's a huge blow to India's already vulnerable transgender community and undoes a lot of progress made over the past few years. The bill comes just over a year after the Indian Supreme Court's landmark decision to decriminalize homosexuality.

At a news conference in Delhi a day after the bill was passed, transgender activist Grace Banu described it as a "murder of gender justice."

"The bill goes against the right to dignity and bodily autonomy of trans people," Semmalar wrote to NPR in an email. He's a member of Sampoorna Working Group, an advocacy organization for transgender and intersex rights.

"You're basically putting a lot of burden on trans people and adding a lot of bureaucratic layers and red-tapeism," says Ajita Banerjie, a Delhi-based gender and sexuality rights researcher.

Banerjie added that the bill fails to mention civil rights like marriage, adoption, social security benefits and also does not provide quotas for transgender people in public education and jobs — something that the Supreme Court's 2014 ruling had directed the government to do.

Transgender individuals in India often face stigma and systematic exclusion in education and employment. As a result, some feel they have no alternative but to turn to sex work; HIV prevalence among India's transgender community is 26 times higher than the national rate. But Semmalar says it's difficult to access health care without facing discrimination.

The bill makes abusing transgender people a punishable offense with a jail term from six months to two years. But under Indian law, when a cisgender (that is, a person whose gender identity matches their sex at birth) woman or child is sexually abused, the punishment can be as severe as a life sentence or, in some cases, even the death penalty. Semmalar says the lesser punishment for crimes against transgender people reiterates and strengthens the idea that trans lives are dispensable and of lesser value.

Even among lawmakers, the bill was contentious.

"Certification itself is discrimination. It's humiliation of a human being," Jaya Bachchan, a member of India's upper house of parliament, said during a session last week.

Bachchan was among dozens of lawmakers who wanted to send the bill to a select committee for further review. Other lawmakers argued that sending the bill for review would further delay the protection of transgender rights.

"Justice delayed is justice denied," said lawmaker Anil Agrawal, who supported the immediate passing of the bill, in parliament last week. "The transgender community will never forgive us if we delay granting them their rights."

Another lawmaker who was against sending the bill for review insisted that any important points that had been missed could easily be added as amendments later.

In a last-ditch attempt to stop the bill, activists are urging India's president not to sign it into law. If that fails, they're gearing up to challenge the law in India's courts.

In 2014, in a massive victory for India's roughly half a million trans individuals, the country's Supreme Court recognized transgender as a third, separate identity and ruled that Indians have the right to choose their gender.

But this bill sets the whole movement back by a decade, Banerjie says.