Accessibility links
Virginity Tests Are Raising Concern In The U.S. — And Around The World : Goats and Soda When the rapper T.I. said he has his teenage daughter undergo an annual virginity test, protests arose in the U.S. In fact, the virginity test is a global issue. 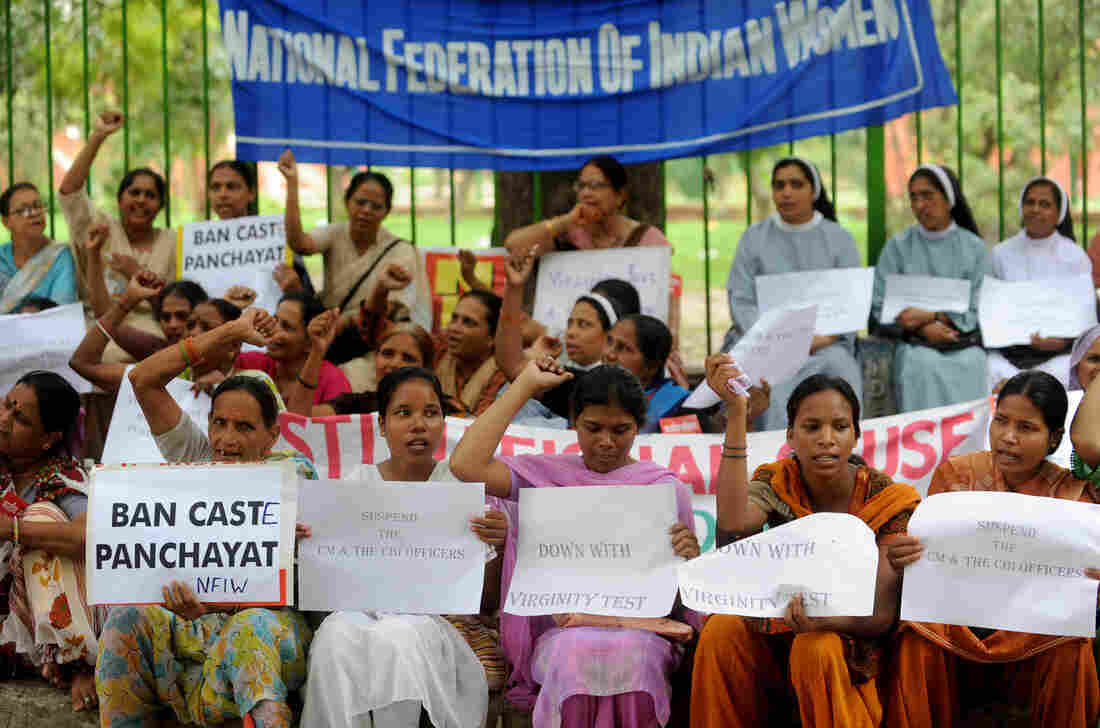 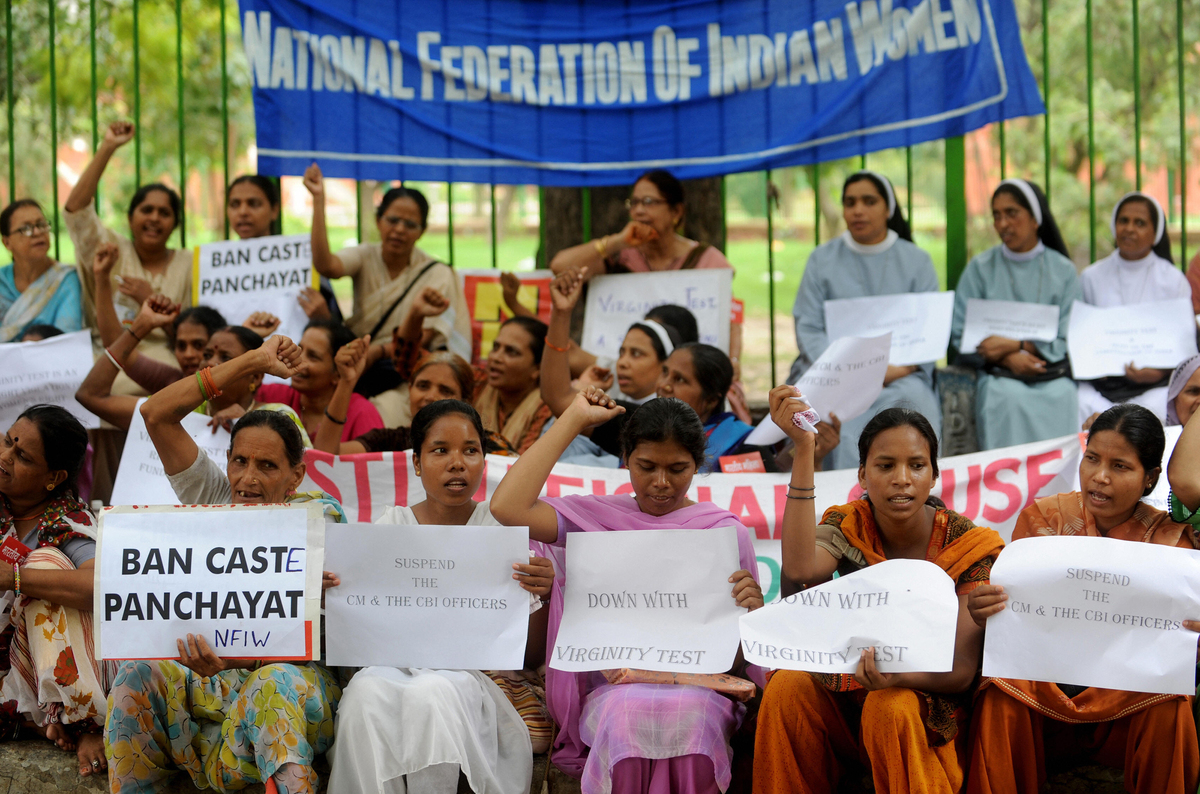 Activists demonstrated against virginity tests in New Delhi in 2009.

Virginity tests are making headlines in the United States. In November, the rapper T.I. drew a firestorm of criticism after he said during a podcast interview that he requires his 18-year-old daughter to undergo an annual virginity test with her gynecologist.

T.I. later explained that the comments were made in a joking manner in an interview he did with Jada Pinkett Smith. But his initial remarks have had an impact.

Even though T.I. himself is from Atlanta, lawmakers in the New York State Assembly are responding to the matter of virginity tests. Last week legislation was introduced to bar doctors from performing such examinations, which are widely discredited by medical professionals.

The Controversy Around Virginity Testing

The Controversy Around Virginity Testing

And the tests are, in fact, a global issue. Virginity tests have been documented in at least 20 countries around the world, including Egypt, Indonesia and South Africa. And according to the U.N., increased globalization in the past century has resulted in requests for and cases of virginity testing in countries that had no previous history of the practice, for example, Belgium, the Netherlands and the U.K.

The test is administered for a variety of reasons: to determine whether a woman can go to school, get married, get a job — or whether she is a victim of rape.

According to the U.N., virginity tests are often performed by inspecting the hymen for tears or for the size of its opening, or inserting fingers into the vagina, to determine whether a girl or woman has had sex.

WHO states that there is no evidence that the test can prove that a person has had vaginal intercourse or not.

In Afghanistan, reproductive rights activist Farhad Javid has been trying to free girls and women who have been jailed for failing a virginity test. In 2018, he met with the president Ashraf Ghani and his wife, first lady Rula Ghani, to request the release of some 190 women and girls who who were jailed in the country's Balkh province for failing a virginity test. In Afghanistan, premarital sex is considered a moral crime.

Javid is the Islamic policy adviser for Marie Stopes U.S., a global family planning organization. He told the Ghanis that virginity tests are unscientific and medically unnecessary. The U.N. called for a ban in 2018. He also told the couple that he had visited the women in jail several times and that they were suffering.

That meeting with the Ghanis was supposed to be 30 minutes but lasted two hours, says Javid, who spoke to NPR from Kabul in August. "She wanted to listen," he says of the first lady.

In January, Rula Ghani and her team traveled to Mazar-i-Sharif, where the prison is located. There, she met with some of the prisoners and with the director of women's affairs in Balkh province. The first lady made a commitment to find a way to help, Javid says.

"Her visit was effective, because the girls were released," Javid says. Between January and April, the 190 prisoners were freed. But his work is not over. Shortly after the prisoners were released from Mazar-i-Sharif, one girl was jailed. "They're still bringing girls under the name of this issue into this prison," he says.

Around Afghanistan, families are still bringing in unmarried daughters to clinics and hospitals for virginity tests. The test is administered for a variety of reasons: to determine whether she can go to school, get married, get a job — or whether she is a victim of rape.

If the girls fail the test, some families alert the police. And law enforcement still imprisons those girls. We talk to Javid, who has worked for Marie Stopes for nearly two decades, about his next steps — and how he plans to change attitudes about the practice of virginity tests.

How are you going to get law enforcement to quit bringing girls in for failing the virginity test?

What will you tell them?

[Since July 2018] Afghanistan has had a public health policy — which has been developed through Marie Stopes, Afghanistan's midwifery and gynecological associations and Doctors Without Borders — that discourages police not to bring girls in for failing the virginity test.

[Health workers] shouldn't be conducting [the tests] in the first place. The Ministry of Health in 2018 said that they would not entertain any virginity tests, because it's not an indication of whether someone is a virgin.

We also have a decree signed by the president of Afghanistan that discourages the virginity tests. We are telling this to the police force and members of the judiciary. But the rule of law is very low. Sometimes you don't know whether [people] are loyal to the president or not. So we try to sell the medical reason more.

You've told me that since May 2018, Marie Stopes has conducted more than 60 trainings on the topic of virginity tests to more than 600 people. They've mostly been to doctors and health care workers to inform them that the practice is unscientific. What has been the reaction so far?

You get a mixed feeling, honestly. Out of 10 people in a training, you get about four people resisting. They say it's against Islam and our culture if we don't provide virginity tests.

Why do people resist?

[They think]we're promoting more girls to have sex outside marriage. That's a regular reaction we get.

If they're pushy, we have to repeat that orientation and training for the second time.

And what happens in that second meeting?

We bring out a male or female religious leader who can talk about the issue from the Islamic point of view, that nothing [in the Koran] specifically says anything about virginity tests. And we try to find someone who is mature so the doctors accept their ideas and opinions.

We usually try to get someone in their 50s or 60s. Age matters quite a lot. That's the culture.

This is the first time you've successfully freed girls who have been imprisoned by this practice in Afghanistan. Are there any more women and girls who are in jail for this reason?

Yes, in Herat. That's our next objective. Wish us all the best to free the girls there as well.

What challenges do you anticipate?

It's a totally different ballgame. There are different types of warlords there. We expect pushback. The first thing we need to do is get alliance with Herat's religious and tribal leaders. Their voice matters if we want to get through to the warlords.

Are you usually the one who leads the negotiations?

That's kind of a scary job.

It usually is tough. But I have a good team. I open a big door and the team maintains the relationship and provides the training.

What is it that allows you to do this job well? I spoke to your colleague George Hayes from the policy team for Marie Stopes International. He told me you work in "unbelievably difficult contexts" yet achieve so much. In 2017, for example, you helped put emergency contraception on Afghanistan's list of essential drugs.

I have built a network of influential people over the years, and we have a strong acceptance and respect to each other. I don't try to align myself with one tribal leader over another. I can speak various local languages. And my parents are mixed — that's another competitive advantage. One is Sunni and the other Shia, so I understand both segments of Islam and can relate [with people I negotiate with].

You travel back and forth from Kabul to the D.C. area multiple times a year. Do you have any time for yourself?

Not really, no. If you are helping people from your heart, you don't get much time for yourself. You're constantly thinking about their issues. And you'd like for every day to make a difference in people's lives. Every time I see someone who has been released from prison or gets [family planning] help, that is the source of my motivation. That gives me the reward to go one extra mile.

Have you heard from any of the women released from prison in Balkh province?

I do talk with them from time to time. And they have thanked us.