Accessibility links
New Video Game Puts You In The Shoes Of A Refugee : Goats and Soda Lual Mayen grew up in a camp in Uganda. Now he's the award-winning CEO of a game development company in Washington, D.C., that has just released 'Salaam' — a game about refugees and peace.

A Kid In A Refugee Camp Thought Video Games Fell From Heaven. Now He Makes Them

A Kid In A Refugee Camp Thought Video Games Fell From Heaven. Now He Makes Them 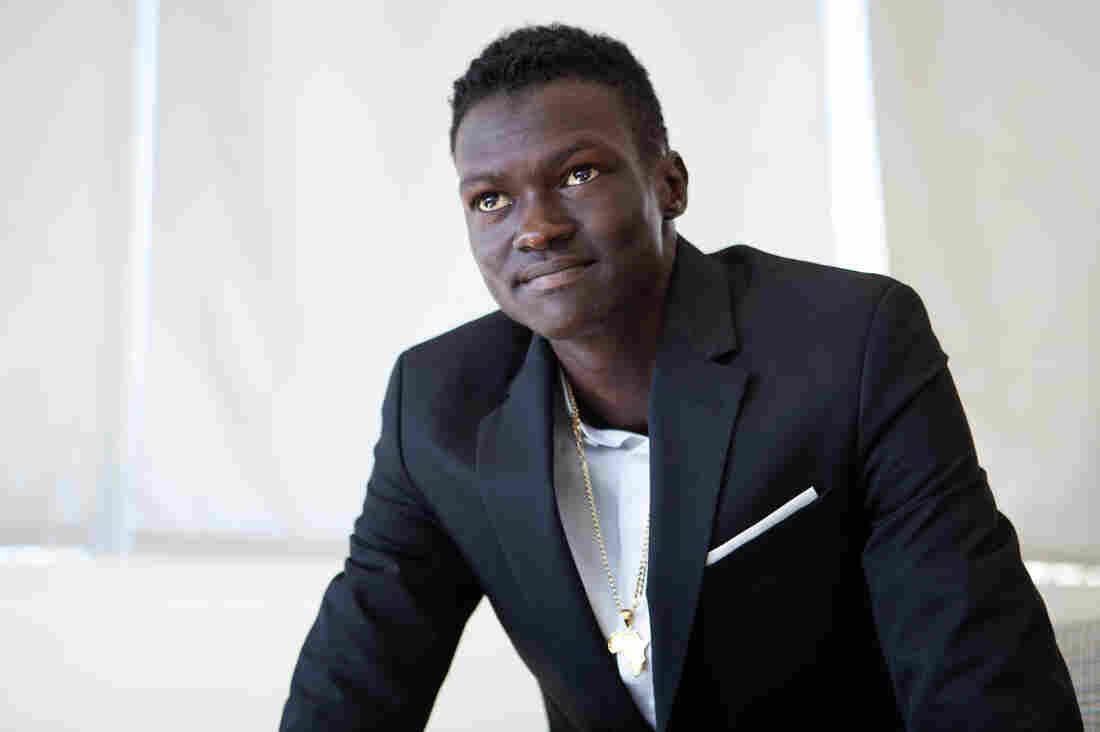 Lual Mayen, CEO of Junub Games, says that before he taught himself how to code at a refugee camp, "I never thought video games were made by people. I thought they just fall from heaven." Catie Dull/NPR hide caption 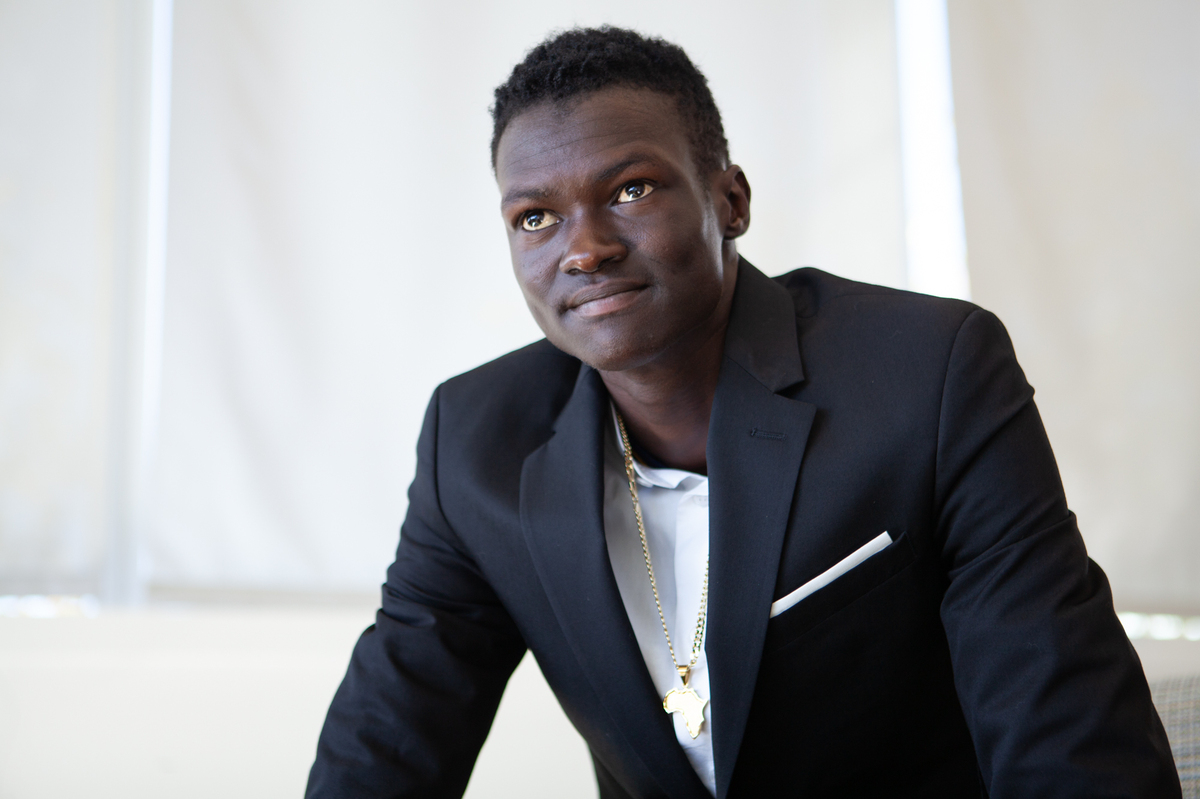 Lual Mayen, CEO of Junub Games, says that before he taught himself how to code at a refugee camp, "I never thought video games were made by people. I thought they just fall from heaven."

Lual Mayen, a video game developer based in Washington, D.C., remembers the first time he saw a computer. He was just a kid at the time. It was 2007, and his family was registering for benefits at a refugee camp in Uganda, where they'd settled after fleeing civil war in South Sudan.

He didn't tell anyone at first, but in that moment he knew in his heart that he wanted to learn to code, he says. More than a decade later, Mayen is garnering international recognition from Facebook and the global gaming community for an innovative video game that brings players into the life of a refugee. The latest version of the game — called "Salaam," which means "peace" in Arabic — will be released on Thursday.

But before that could happen, Mayen had to get his mom to take him seriously.

When he eventually confessed his dream to his mother, he says she laughed at him. "She looked at me like I was crazy. 'What are you going to do with a computer? Who's gonna train you?' But because she was a mother to me, she didn't discourage me."

Mayen says his mother quietly began putting away part of her earnings from mending clothes for other refugees at the camp. After three years she saved $300 and surprised him with a laptop.

Mayen was astonished and grateful for the gift, but he says it also came with a downside. He worried that if he didn't take advantage of her gift, his mother would take his or his brothers' desires less seriously. Also, he wasn't sure where to begin learning to use it.

His first hurdle to mastering the computer was simple but significant: finding a place to charge it. He eventually found a generator in a distant part of the refugee camp and says he walked three hours each direction to get there every day.

Next, he needed instruction. He couldn't access the Internet, but a friend gave him coding tutorials loaded onto a flash drive. That same friend also gave him a copy of his first video game: Grand Theft Auto.

Mayen says he was drawn to the game, which is famously violent, but "I felt like this is what is actually happening in my country. This is war." He started to wonder what if, instead of a game that encourages players to take violent actions, "I could make the same thing happen, but for peace and conflict resolution?"

That was the inspiration for the mobile phone game, Salaam, which he spent the following months creating. In the game, players take on the identity of a refugee escaping a conflict zone and have to gather resources like food and medicine while running away from violence to stay alive. 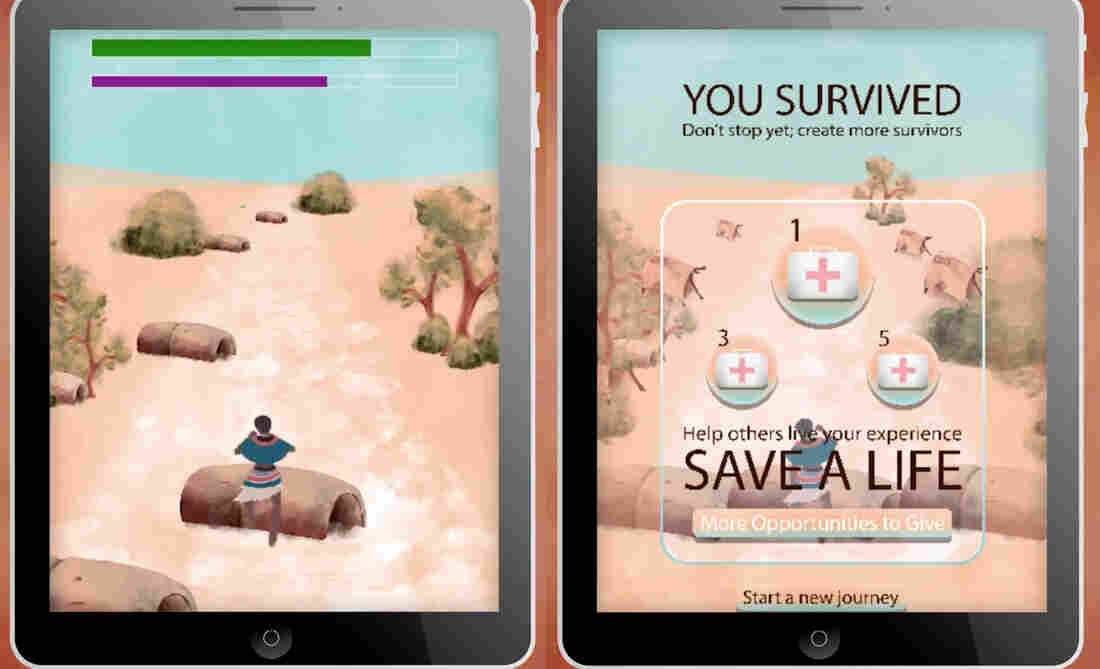 Screen shots of Salaam. Players gather resources like food and medicine while running away from violence to stay alive. Salaam Game hide caption 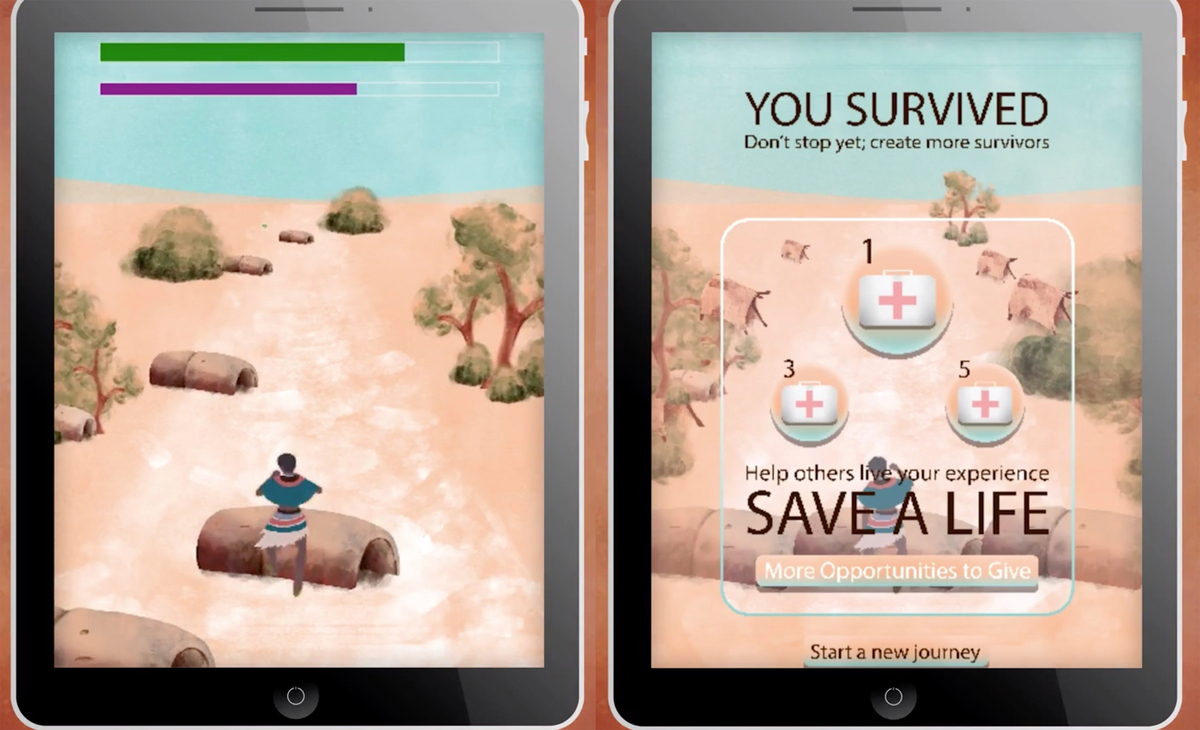 Screen shots of Salaam. Players gather resources like food and medicine while running away from violence to stay alive.

Mayen shared the game on his Facebook page, and that's when he started attracting international attention. Most notably, more than 26 million people watched via livestream as Mayen was named a Global Gaming Citizen at the 2018 Game Awards in Los Angeles, for using gaming to promote "positivity" and community.

Even within that category Mayen is a standout, says Leo Olebe. He's the global director of games partnerships at Facebook, which co-developed the Global Gaming Citizen category for the Game Awards. "In the games business, it's really easy to fall back on orcs and goblins," says Olebe. "It's really hard to take this throughline of peace and conflict resolution and carry it through everything that you do. And Lual does that. It's mind-blowing stuff."

Mayen is now focused on bringing Salaam to a larger audience by releasing an enhanced version on Facebook Instant Games, through the company he created, Junub Games. His vision is to use the game to inspire empathy for refugees. And he says he's working on a charitable component so that when players make in-app purchases of extra resources in the game, a portion would go to a grassroots organization at a refugee camp. As people pay to "stay alive" a little longer in the game, they're supporting actual refugees' lives.

Olebe says so-called "social impact games" like Salaam are a category that has the potential to push the industry to expand its definition of success.

"Lual is actually making a difference in this world by inspiring people to be better," he says. "That's a very different and important metric relative to retention rates or lifetime value of a player or other things people talk about more often in the games industry. I don't even know how you place a value on helping somebody better understand the world. He's playing a whole different game altogether." 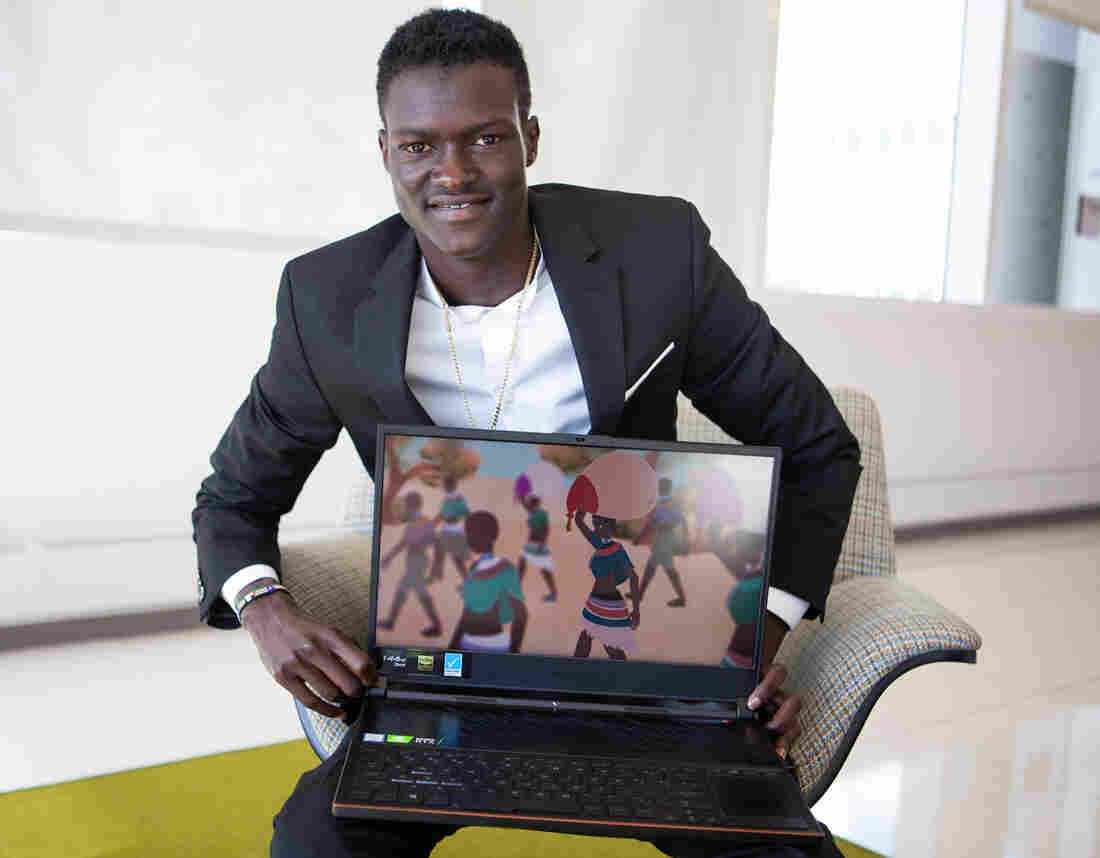 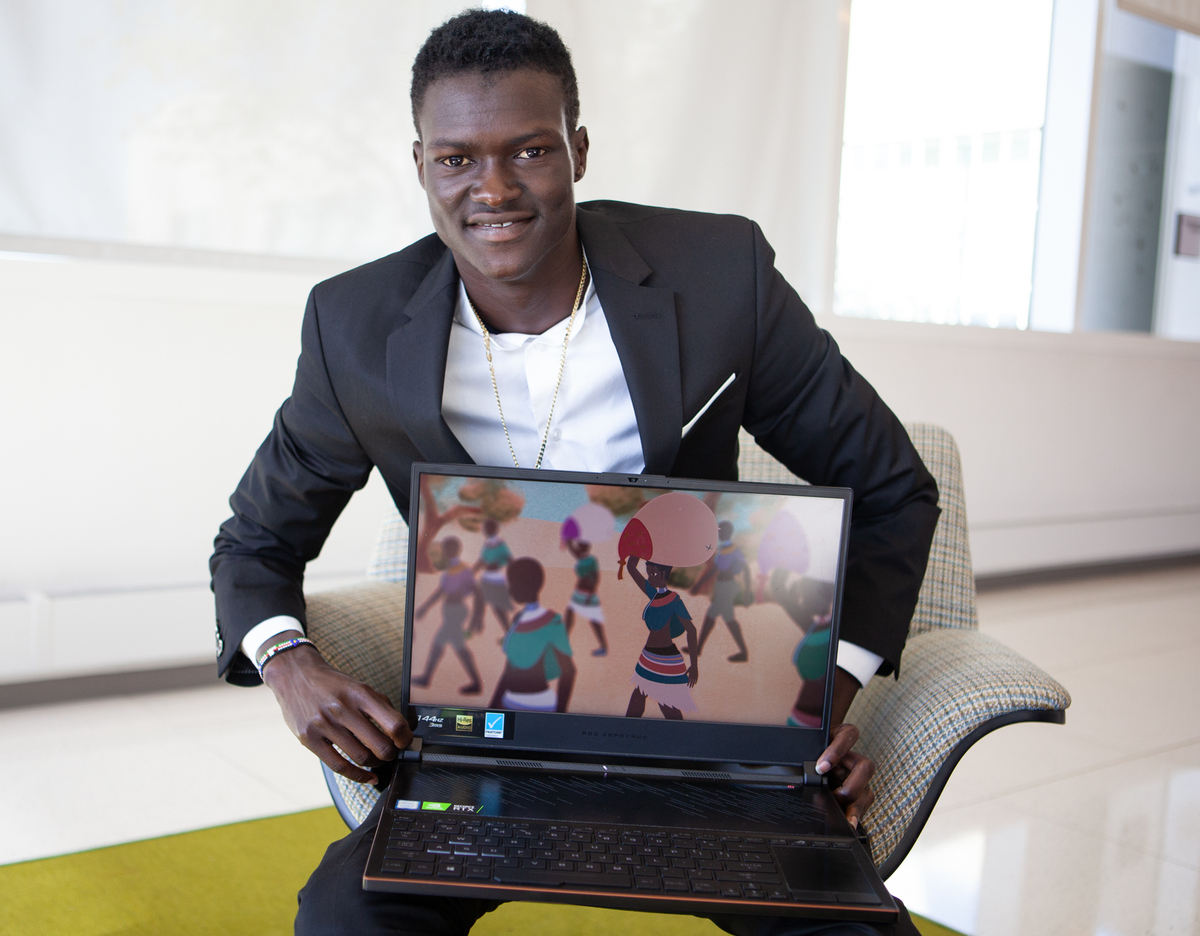 Games where a player takes on another person's perspective or becomes immersed in a specific environment can be beneficial in building positive interpersonal relationships, according to Tammi Kral, a research assistant at the Center for Healthy Minds at University of Wisconsin-Madison who is not affiliated with Junub Games or Salaam. Kral says that as video game developers explore the potential for games to inspire "prosocial" behavior, they would do well to collaborate with psychologists and behavioral scientists who understand the impact of games on specific brain networks.

The video game also comes at a time when the Trump administration has slashed the number of refugees who will be permitted to resettle in the U.S. in the coming year by nearly half to 18,000 — a record low since the modern refugee program was established in 1980.

Building empathy for refugees is especially pressing "under an administration that overtly expresses anti-immigrant sentiment and promulgates harmful policies against refugees and immigrants," says Rachel Landry, acting director of refugee resettlement and asylum policy and advocacy at the International Rescue Committee.

Mayen says Junub plans to premiere the newer, enhanced version of Salaam on December 12 during the livestream of the 2019 Game Awards. He says the main objective of the game remains the same: taking a character from a war-torn environment to a peaceful context that's left intentionally undefined.

"It's not a country. It's not a camp. It's just a place you can have peace of mind," he says. "It's not about the destination. The main thing is helping people understand the journey of the refugee and to have empathy for what refugees have to go through."