Accessibility links
5 Civil Servants In Pakistan Are Honored With Integrity Icon Award : Goats and Soda The global program Integrity Icon aims to "name and fame" instead of "name and shame." This week, Pakistan honored government employees who did everything from track down killers to evict squatters.

They're The Bravest, Humblest Civil Servants In Pakistan

They're The Bravest, Humblest Civil Servants In Pakistan 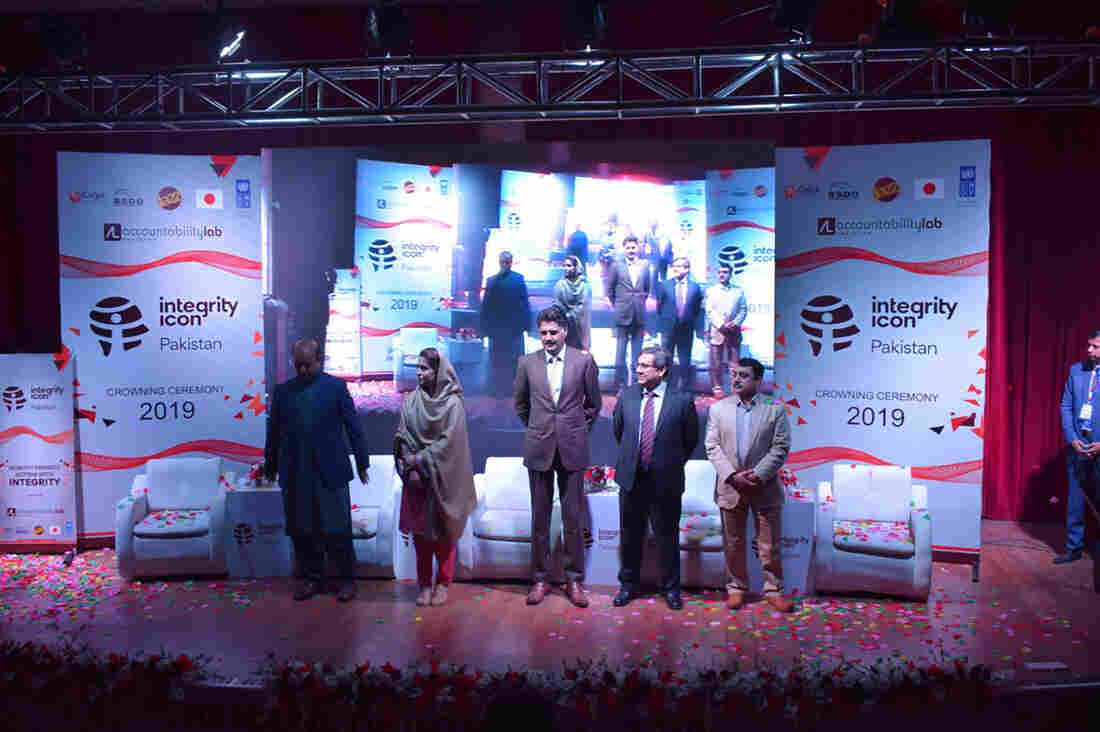 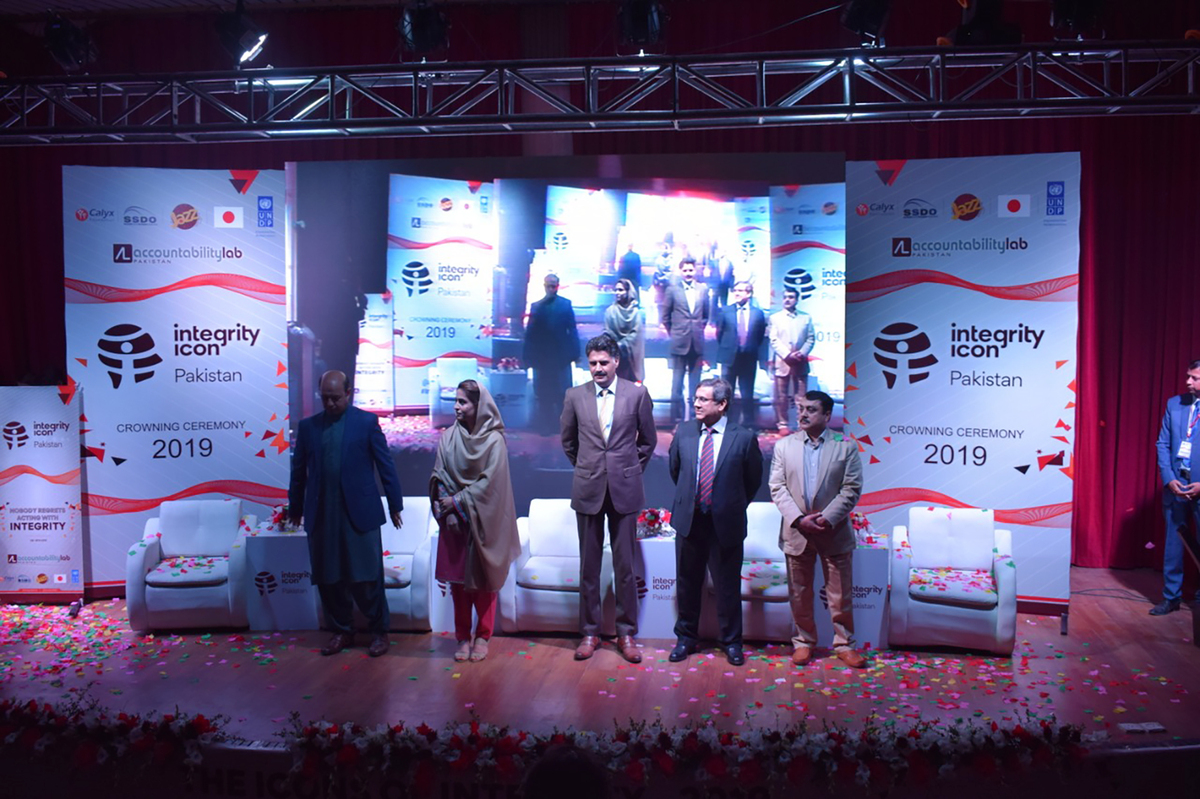 Standing up to corruption.

Fighting for the little guy.

It's all just part of the job for the five civil servants from across Pakistan who were honored Monday night in Islamabad at Integrity Icon 2019.

The goal of the award ceremony is to " 'name and fame' instead of 'name and shame,' " shining examples of government workers, explains Fayyaz Yaseen of Accountability Lab, a nonprofit group that promotes transparency and accountability.

"When people talk about corruption, they are cynical. This is about finding everyday heroes and to celebrate them," he adds.

Accountability Lab launched the idea in Nepal back in 2014, and it has since gone global, with Integrity Icon searches in multiple countries on three continents. Pakistan began participating four years ago.

"Back in 2016, when we launched Integrity Icon, a narrative prevailed that in developing countries, development goes hand in hand with corruption, and if we wanted the former, we will have to tolerate the latter," Yaseen says.

That view has started to shift, particularly in Pakistan. During the 2018 election campaign, the country's current Prime Minister Imran Khan promised to get rid of crooked officials and middlemen. True to his word, Khan's government has gone after politicians and businesses that have evaded taxes, lied about their assets, paid bribes and engaged in other shady behavior.

So there was even more of a reason this year to call attention to the successes of government employees. A jury selected the five winners from a list of nominees; each was profiled in a five-minute video.

The videos are shared online to build interest from the public, who get to weigh in for the popular vote category. This year, more than 117,000 people voted.

Let's meet the top vote-getter — and the other finalists.

Since he joined the Sindh police force back in 2011, 33-year-old senior superintendent Umar Tufail has worked in one of the province's most dangerous rural areas — Kashmore, a haven for highway robbers. He was instrumental in arresting a suspected murderer earlier this year in an honor killing case. When a 13-year-old girl went missing, Tufail's investigation found that she was the victim of an honor killing related to her desire to marry a cousin. Honor killings are often tied to a marital choice.

He also arrested a powerful local landlord in connection with the murder of a 9-year-old boy.

His co-workers praise Tufail for his principles — he's against bribes, favoritism and nepotism. That's because, Tufail says, a good civil servant should serve the people, not create problems for them.

Rizwan Akram Sherwani, 52, the director of taxation in Lahore, Punjab, has implemented several new projects during his two decades with the department, including a toll-free hotline number to field tax questions from the public. He also started the Motor Taxation Management Information System, which helps the government trace illegal plates and alerts authorities when unauthorized cars are on the roads.

He has more tech ideas on the horizon.

"We are going live soon with an online appointment management system which will help you set an appointment with any government office," he adds. "This will help save everyone's time."

The Integrity Icon award is an important form of recognition, says Sherwani, who adds that a career in public service doesn't come with a lot of tangible benefits. Plus, it can be tough to get ahead. "I am probably the most qualified person in my department but I cannot get promoted till my senior gets promoted or retires," he says with a laugh.

When the Integrity Icon committee, interviewed people who know Zia, they often said he was very humble and down to earth.

But in his work as a monitoring officer with the education department, he's not afraid to act boldly.

Zia was reading the newspaper about five years ago when he glanced at a small news item about a government primary school being taken over by the squatters with the support of influential people and criminal gangs. (This is a common phenomenon in Pakistan — land grabbers then use the stolen areas to build offices or shops. In big cities like Karachi, they even build high-rises.)

"I was posted in Haripur and it took me a day to get to the government girls' primary school, which was in a small village called Hasan Bai, another day to kick those guys out. But my team and I did it," he says, noting the police officers with him who helped get the school back to normal.

The 39-year-old is now a district monitoring officer in Khyber Pakhtunkhwa, where his duties include carrying out background checks on new hires and ensuring that teachers come to class. He also visits schools to make sure they really exist — sometimes in Pakistan a "ghost school" is set up to get funding but there are no teachers or students.

Zia told NPR he's grateful for the support of his supervisors: "If my boss appreciates me, it is always a boost and gives me courage to do more."

Hailing from the province of Balochistan, Rohana Kakar serves as a secretary of the Regional Transport Authority in Quetta.

It's rare for a woman to work in a male-dominated department in this conservative province, trying to curb malpractice in public transport, including cancelling illegal permits and licenses. That's why Kakar is being cited for bravery.

To prevent the use of favors to obtain permits and licenses, Kakar introduced a Driving Licence Mechanism that made driving tests mandatory for anyone driving heavy duty vehicles or public buses, taxis and rickshaws.

Since many people in her province drive without a proper license, she's set up a two-step process to check driver competence. First there's a practical test to see if truck and public transport drivers understand what they are doing behind the wheel. Once they clear that hurdle, they are quizzed on road signs and traffic rules.

For Kakar, the best prize of all was looking at the eager faces of the 300 university students who attended Monday's ceremony.

"Many of them came up to me and said that they were inspired to go into the civil service because of what they witnessed that night," she said.

When Dr. Zahid Khan Khattak became the medical superintendent of a government hospital in 2013, he soon learned of a scam where staffers were creating false bills for medicines.

"We had auditors who conducted a full inquiry. I helped with recovering the money from all of them," he says.

Then he basically restaffed the hospital with people he had personally interviewed and set up a zero tolerance policy — one infraction and you're fired.

He has also introduced an automated system that helps with procurement and disbursement of medication and with patient admissions.

Winning Integrity Icon makes Khattak think about his father: "He really motivated me to go into the government sector and work for the people," he says.

Tooba Masood-Khan is a freelance journalist from Karachi, Pakistan. She's worked at Pakistani newspapers since she was 17. She likes to write about heritage buildings and women's health and rights. She tweets @tabahitooba