Accessibility links
What Will It Take To Finally End Congo's Ebola Outbreak In 2020? : Goats and Soda As the world's second-worst Ebola outbreak in history drags into a new year, experts think the solution is less about medicine, and more about security.

What Will It Take To Finally End Congo's Ebola Outbreak In 2020?

What Will It Take To Finally End Congo's Ebola Outbreak In 2020? 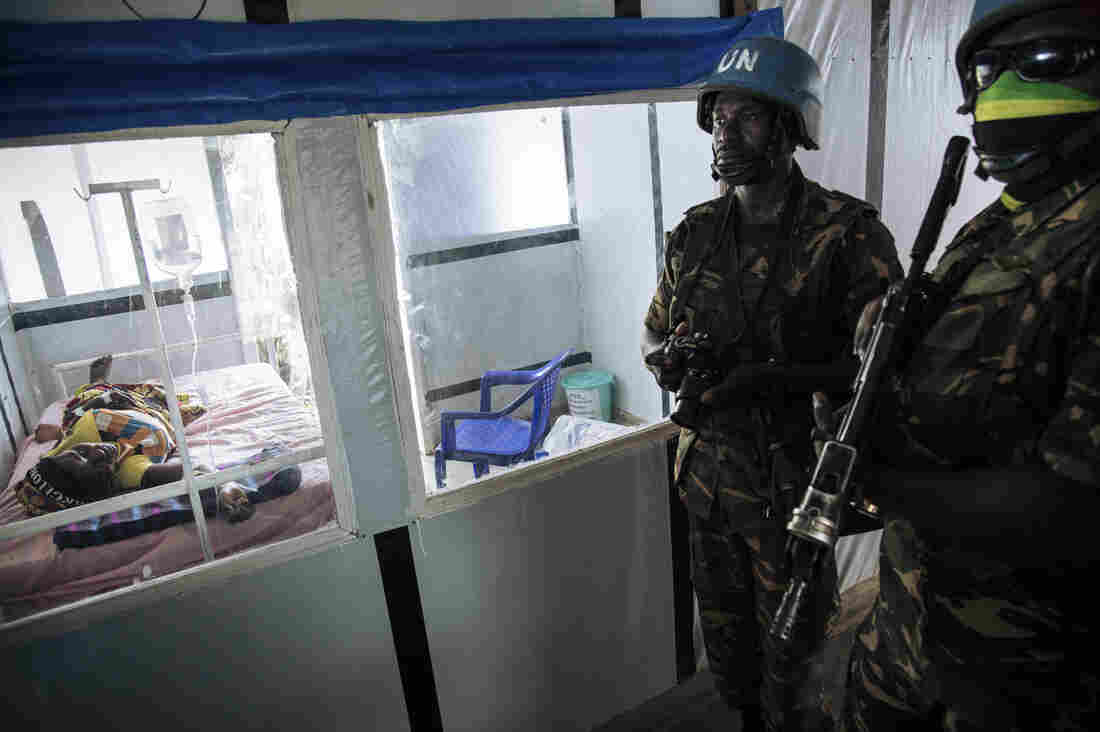 United Nations peacekeepers stand next to a patient during a visit of the U.N. secretary-general at an Ebola treatment center in Mangina, North Kivu province, last September. Alexis Huguet /AFP via Getty Images hide caption 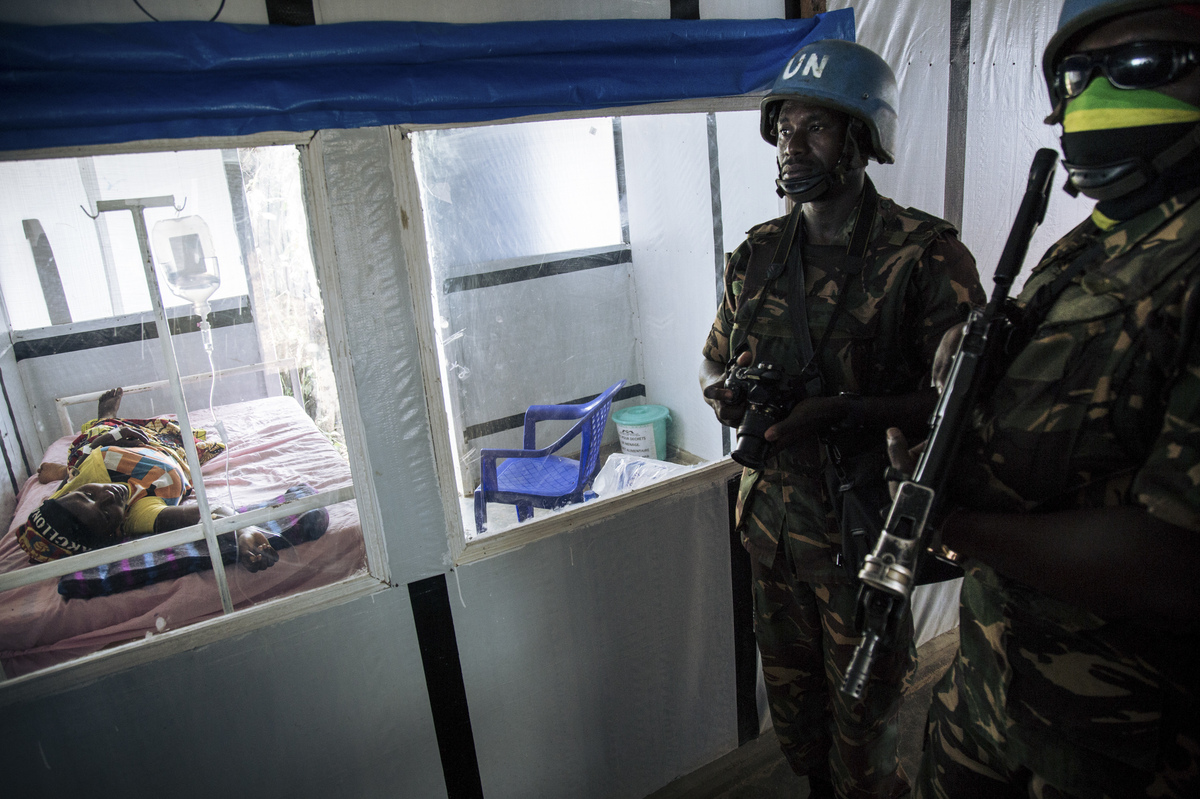 United Nations peacekeepers stand next to a patient during a visit of the U.N. secretary-general at an Ebola treatment center in Mangina, North Kivu province, last September.

Last fall, Félix Tshisekedi, the president of Democratic Republic of Congo, made a triumphant prediction: Before 2019 was over, the Ebola outbreak that had ravaged his country for more than a year would finally be brought to a close. Already, health workers had managed to quash the Ebola virus in all but a small set of remaining hot zones. New infections had slowed to a trickle.

Then, on Nov. 28, unidentified armed men launched a series of attacks on the offices and living quarters of several Ebola response teams, killing three workers and forcing scores of others to evacuate. Within days, new Ebola infections were once again on the rise.

It was just the latest setback in an outbreak that has proved devilishly difficult to contain as it has unfolded in a part of Congo with a long history of conflict between the government and multiple armed groups. Since the epidemic was declared on Aug. 1, 2018, more than 3,300 people have been infected with Ebola, making the outbreak the worst on record for Congo, and the second worst in human history after the much larger West Africa Ebola outbreak of 2013-2016.

So is it possible to finally end this outbreak in 2020? And if so, what will it take?

NPR put that question to five people involved in the Ebola response; here's what they said:

Ensure Ebola responders can safely get to the hot spots

Dr. Marie Roseline Belizaire, a field coordinator with the World Health Organization who has been moving from hot spot to hot spot since the very start of the outbreak, was in one of the facilities that was attacked on Nov. 28 (you can read her account of that experience here and here). She says that in the aftermath, her teams have had to cut back on the time they spend in areas where the Ebola virus is spreading.

Most of them have relocated to the relatively safer city of Beni, two hours' drive from the closest hot spot. To reach the farthest hot spot, they are ferrying staff in by helicopter for a few hours at a time. So while they are still managing to carry out key activities like identifying Ebola cases and tracking down and vaccinating those who've been in contact with them, they can't do so in every location every day.

"It has never been this difficult before," says Belizaire. "Even though we have suffered [previous] attacks, we didn't leave. We didn't evacuate our team."

Worst of all, she says, she's not convinced that the United Nations — which has peacekeepers in the area — and Congo's government can protect Ebola responders from further harm.

"They have failed us," she says.

But what's the best way to keep Ebola responders safe? On this point the answers diverge.

David Gressly, the U.N.'s emergency Ebola response coordinator for the Congo outbreak, says that since the Nov. 28 attacks he has been in communication with both the U.N. and Congo's government about how each may bolster the security it provides to Ebola responders as well as to the general population.

For instance, in a remote rural area called Lwemba where many new cases appear to be concentrated, "the Congolese army told me that they were going to double the number of troops on the ground in terms of providing security," Gressly says. "And, of course, municipal forces are patrolling in that area as well. There may be some more work to be done on that side. But those steps are very encouraging as a way forward."

Brian Moller, emergency coordinator for the aid group Doctors Without Borders in North Kivu province, where the outbreak has been most intense, says the impulse to step-up armed guards is "understandable." But he argues that it's short-sighted and will likely backfire, particularly if the guards are stationed at or near health care facilities, or used as escorts for Ebola responders.

After years of abuse at the hands of Congo's military, the local population is already mistrustful of these troops, Moller notes. Most recently, the local population has protested both the military and U.N. peacekeepers for failing to protect them from a spate of massacres over the past several months by one of the largest rebel groups in the area, the Allied Democratic Forces.

So if health workers are seen to be aligned with security forces, "this just adds to the mistrust that already exists around Ebola," Moller says. "This mistrust then leads to increased security presence [by armed forces], which leads to more mistrust, in a downward spiral."

Citing this very concern, last month Doctors Without Borders halted its operations in one of the hot spots where Ebola responders were attacked — a rural region called Biakato.

Find out who was behind the latest attacks

There is at least one solution to the violence for which there seems to be widespread support. As Dr. Jean-Paul Mundama, who monitors diseases with epidemic potential for Congo's Ministry of Health, put it: "Every time we are close to controlling the epidemic there has been some attack that destabilizes the response teams. So we need to find out what is provoking these attacks."

Moller, of Doctors Without Borders, agrees, and adds that if the sponsors of the latest attack can be identified, then there's a chance to "speak to those behind the violence to gain their understanding and acceptance of the Ebola response."

Gressly, the U.N. Ebola emergency coordinator, is more focused on the possibility that bringing those responsible to justice could deter future attacks — either by setting an example or simply putting the attackers out of commission.

Gressly says that approach seems to have contributed to a slowdown in violence last spring, after a similar flare-up of direct attacks on Ebola responders. Congo's government has charged several Congolese doctors in the most serious of those spring incidents: the assassination-style killing in April 2019 in the city of Butembo of a WHO epidemiologist, Dr. Richard Mouzoko.

There's a lot of money to be made from the Ebola response, given all the logistical spending it requires and the jobs it generates for locals, explains Gressly. So the government's theory, he says, is that these doctors' interests were "financial — being able to have a greater share of the business that was going on in relation to the response."

Gressly says it's possible the Nov. 28 attacks had a similar motive — even if the attackers themselves were not from the same group. But tracking them down has been complicated.

"A number of arrests have been made," Gressly says. All are men who belong to one of the many rebel militias in the area. And through those arrests, he says, "we have been able to generate a number of leads."

Yet shortly after a senior leader of the militia was arrested, his men attacked the convoy that was transporting him to prison. According to Gressly, the driver and police escort were all killed, and the militia leader escaped.

Ramp up the role of U.N. peacekeepers

Direct attacks aren't the only challenge that Ebola responders are facing. In recent weeks their work has been continually disrupted by massacres of hundreds of civilians in the Ebola outbreak zone that have been launched by the Allied Democratic Forces — as well as violent protests by members of the community against the Congolese military and U.N. peacekeepers for failing to protect them.

Stephen Morrison, director of global health policy at the Center for Strategic and International Studies, says this has been the predictable result of a decision by Congo's government decision last fall to launch a major offensive against the ADF. Retaliating against civilians is "a playbook the ADF resorts to in these types of situations," he says. "This is not a new pattern."

And Morrison says it's particularly problematic that Congo's government chose to launch the offensive against the ADF without coordinating with, or even really consulting, the large U.N. peacekeeping force in the area.

"The Congolese have been very reluctant to partner with other forces. They're very sensitive to their own sovereign interests. So they're trying to do this on their own," says Morrison. "But they've failed repeatedly."

In other words, he says, Congo's military has done just enough damage to provoke the ADF into killing civilians, but not enough to actually disarm them.

Morrison argues that by enlisting the help of U.N. peacekeepers, Congo's military would stand a much better chance. But so far the U.N. member states that set the peacekeepers' mission — particularly those on the Security Council, such as the United States — have shown little interest in pressuring Congo's government to bring peacekeepers into the effort.

"We just don't have the type of high-level political leadership focused on this problem and the threat that it poses," laments Morrison.

Mundama, of Congo's health ministry, says one misstep early on in the outbreak was to set up the Ebola response as a largely standalone effort, rather than embedding it within Congo's existing network of health centers.

To some extent this was natural, he says: "We were like firefighters — chasing the Ebola outbreak from this place to that."

In the short term, he says, it's easier to outsource Ebola response work to specialized temporary teams. But over the long run, it would be much more effective to bolster the ability of preexisting health centers to do Ebola response work — essentially training them up to do much of the contact tracing and vaccinating.

To a large extent, he says, the focus of the response has now shifted in this direction. That in turn has also fostered more community acceptance of Ebola response measures.

Even after this outbreak is over, "eventually Ebola will come back," Mundama says. "And the local health centers need to be ready."

If and when the current outbreak is contained, it's very possible that the next resurgence of Ebola in Congo will be sparked by a relapse in someone who was originally infected in this outbreak, says Gressly. Already, in early December, the caseload would have been down to zero, but for an Ebola survivor who relapsed — and then infected more than a dozen people who came into contact with him.

"It's extremely rare that this happens. But it does happen," says Gressly. "And we have a thousand plus survivors of this outbreak now."

The key, he says, will be to ensure careful long-term monitoring of Ebola survivors in a way that's also sensitive to their situation.

"People need to be aware of the risks," says Gressly. "But if we're not careful in communication, it may create a kind of stigmatization that that will make these people's lives very difficult."