Accessibility links
A Father's Death in A Venezuelan Hospital Reveals Disturbing Conditions In The Morgue : Goats and Soda When this reporter's father died, he accompanied the body as it was taken to the morgue. The grieving son says it was the hardest walk of his life. 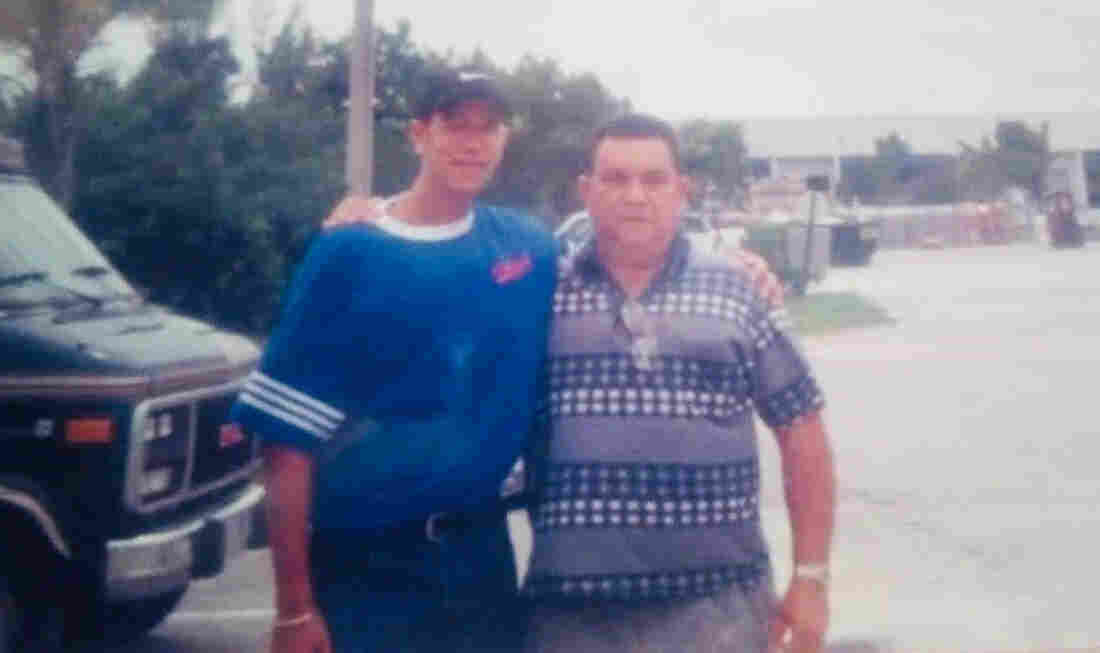 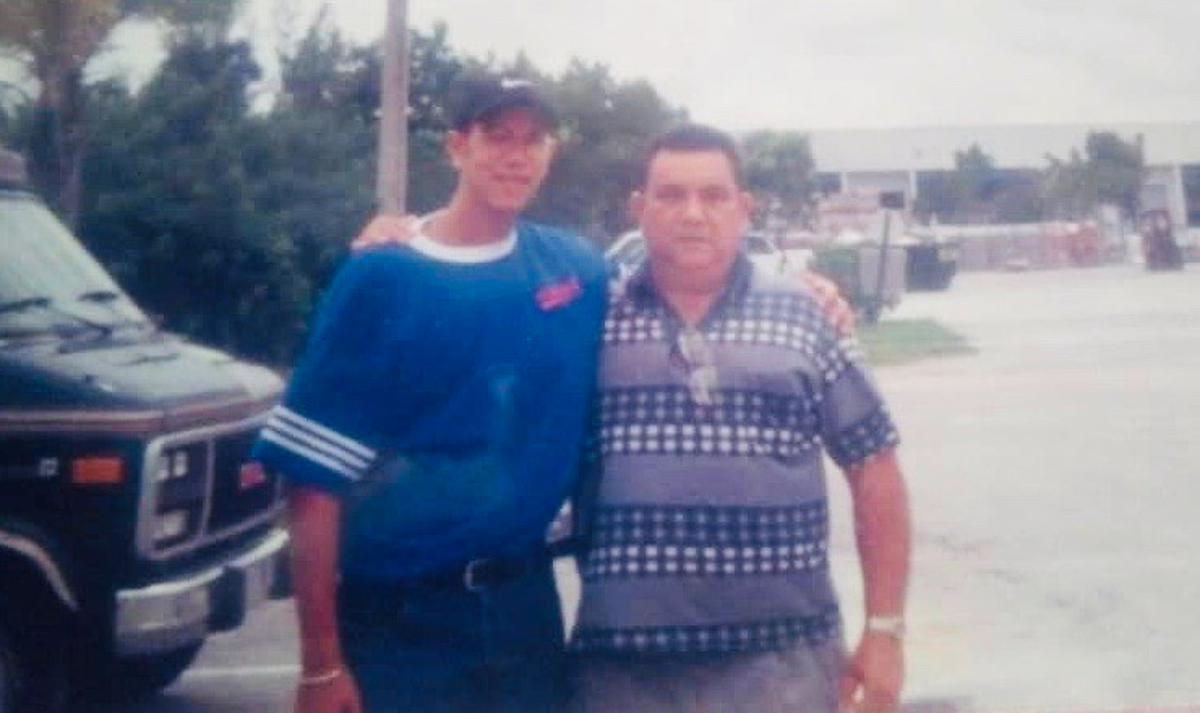 Gustavo Ocando Alex and his dad, Gilberto, in 1999. Last year, his father died of a heart attack at age 81.

Editor's note: This story contains graphic descriptions of conditions in a hospital morgue.

In the bowels of a Venezuelan hospital, I took my toughest walk ever.

It was just after dawn on Oct. 17. The corpse of my 81-year-old father lay on a gurney, covered in thick orange sheets. He had just died of a heart attack in his hospital room, on the fifth floor. He was lying in bed next to my stepmother, his companion for the last 20 years. It was four days after doctors had performed a major emergency surgery to repair his large intestine.

My father's care during his hospitalization was acceptable despite the deterioration in health care services during the current economic crisis. (The staff was quite good, but we had to bring our own water and medications, and there were flies constantly flying around the room.)

After he died, it was another story. I saw firsthand how drastically the quality of my country's medical institutions has declined.

In Venezuela, when someone dies in a hospital, the body is moved to the morgue until the family can sign papers to claim the body and take it for burial.

After my father's death, a male nurse in his early 20s pulled the gurney down a long outdoor corridor at University Hospital of Maracaibo. I followed along because I wanted to stay with my father's body until it reached the morgue, at which point I would go to an office to sign the necessary documents. I was heartbroken, tearing up uncontrollably.

Memories of my father were passing through my mind like a high-speed train: I could see him throwing and catching a baseball with me when I was a kid and, years later, holding my 2-year-old baby girl in his arms.

And then, as we got about 50 feet away from the main entrance of the morgue, a nauseating smell of putrefaction slapped me in the face. It was the kind of stench that shuffles your stomach and seems to find its way under your skin.

The reek vacuumed up all those recollections in a snap.

The young nurse froze at the edge of the doorway. He leaned to the floor, and I thought perhaps he had a pain in his knee. Then I realized he was overcome with a wave of nausea.

Then I, the son of the departed, had to encourage a health worker to go on inside the morgue despite the foul smell.

We went down a narrow indoor hallway leading to the morgue, which consisted of five separate rooms. Every step drew me closer to the source of the stench, which I soon discovered was in one of these rooms. This particular room was filled with about a dozen rotting bodies on beds, some piled on top of each other.

The nurse with the gurney proceeded to a different, smaller room where my father's body would stay until I'd signed the papers. Then the nurse left. I was standing in front of a small desk, but as yet there was no staff member there. The door to the large room with the rotting bodies was open. I went in and took a quick tour with a tissue covering my mouth and nose. The scene was creepy, as if extracted from a horror movie. Two big overhead lamps shone upon two corpses. I could see their bones. The little flesh that remained had turned black and rotten.

What was even more horrifying was to see decomposed bits of flesh from their bodies scattered on two thin mats on the floor, surrounded by dozens of dead worms.

I was later told by a hospital representative that cats and dogs are able to sneak into the morgue and feed on the bodies.

The room was unbearably hot. I found out that the air-cooling system that was supposed to keep the morgue at temperatures that would keep the bodies from decomposing had broken.

To document what I was seeing, I quickly took four photos with my phone. I was worried of what would happen if someone saw me — reporters and news agencies need to ask for permission to take pictures or cover news inside public hospitals in Venezuela.

Five minutes passed before the staffer on duty showed up. He moved my father's body to another room, next to the bodies of four recently deceased people. I signed the papers and left, then returned an hour later with two workers from a funeral home to pick up the body.

After a long shower back at home, I joined my family, and we went on to bury my father.

But the morgue scene stayed with me. I could conjure the smell or see the horrific images in my mind anytime. It distressed me almost daily.

One week after my father died, I began making phone calls to learn more about the morgue situation.

While many bodies of the deceased are quickly claimed by relatives, some corpses are abandoned. Since August, there had been 14 corpses left in this hospital's morgue because relatives did not claim them, according to a hospital staffer familiar with the forensic procedures in the health center. This staffer asked for anonymity for fear of being fired for criticizing the hospital. Most of these 14 bodies were homeless people, elderly people or patients with no relatives, the source said.

The two freezer units used for preservation haven't worked for months, and the air conditioning is also broken, the source continued. So the temperature in the morgue rooms is close to 100 degrees Fahrenheit, the source said.

This situation has been going on for some time. In October 2018, the BBC's Spanish news site reported on the very same Venezuelan morgue I had visited: "Many lifeless bodies lay over dirty metallic tables. They should be there for only a few hours and always in cold, but most of them spend days there, even months." Photos documented the scene — which was identical to what I saw a full year later.

In a phone interview, Dora Colmenares, secretary of the Organization of the College of Physicians in Zulia state, told me about the animals that infest the morgue: snakes, cockroaches, worms, mosquitoes, cats and dogs.

"We're like a zoo. The environment is completely polluted," she said.

The hospital staff tries to scare the animals away, but there are too many for them to handle and often the animals come in at night.

An NPR request to interview Mervin Urbina, director of the Universitario Hospital, to discuss the situation in the morgue was declined. No reason was given.

The tragedy in the morgue is only one manifestation of the health care issues in Venezuela, says Colmenares. The Universitario hospital where my father was treated, she says, can't perform X-rays because the equipment is broken and it doesn't have the proper supplies to do laboratory tests.

The Office for the U.N. High Commissioner for Human Rights said last July that the health situation in Venezuela was "dire, with hospitals lacking staff, supplies, medicines and electricity to keep vital machinery running."

Colmenares thinks that the landscape of rotten and forgotten bodies is a reflection of how bad the entire system is.

"In Venezuela, even the human rights of the deceased are violated," says Colmenares, who is also a university professor and specialist in general surgery.

Provea, a Venezuelan NGO that promotes and defends human rights, said in July that the number of complaints about the decay of hospital infrastructure and morgues increased from 400 in 2017 to 840 in 2018.

Few hospital employees want to be inside or near the large morgue room where I stood the day my father died, says Colmenares. The hospital does not provide the morgue workers with gloves or any other equipment for personal protection, I also learned.

That's definitely a concern, says Melissa Connor, who teaches forensic anthropology at Colorado Mesa University, is the director of the Forensic Investigation Research Station and studies the decomposition of human remains. She says that hospital staffers who aren't given protective gear could be putting themselves and others at risk. Most diseases don't linger on the bodies of the deceased (although some, including hepatitis B, do), but the bigger issue is bacteria.

"If you do have cuts on your hands, it's likely you'll get bacteria into those cuts," she notes, explaining that this is especially dangerous if the workers then come in contact with patients with weakened immune systems.

Ivan Lopez, a nurse who works in the hospital, told me that it is common to see medical students, doctors, nurses, maintenance staff or relatives of dead patients head down that corridor where I took my toughest walk — only to turn back when the smell hits them.

His recollection reminded me of the pale young nurse who pulled my dad's gurney.

"We're all afraid for our health," Lopez says.

Maybe everyone in Venezuela should be.

And I'm afraid I will never be able to think of my father, and his wonderful life, without being haunted by that long walk to the morgue.

Gustavo Ocando Alex is a freelance writer in Venezuela who has contributed to BBC World News and the Miami Herald.