Accessibility links
Davos Meeting Gets Lots Of Criticism For Being Elite. Is It Warranted? : Goats and Soda Critics love to hate the World Economic Forum's annual meeting for elites. But people who work in global health and development say it has helped do some good. 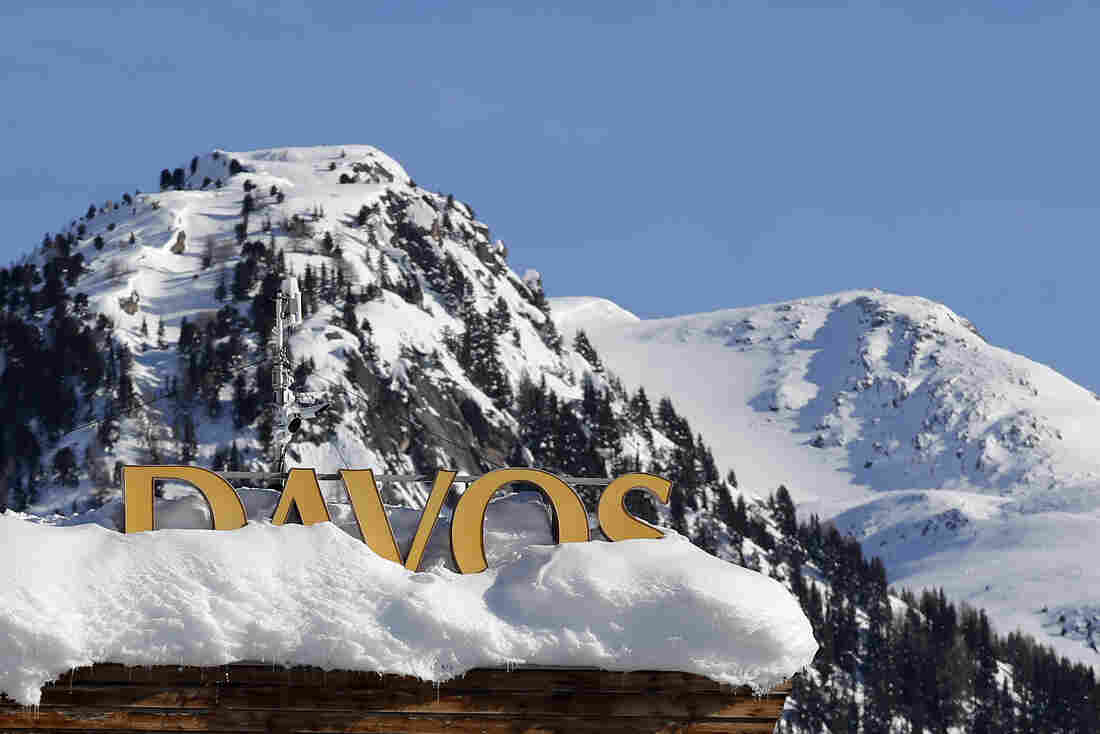 A Davos sign sits atop a hotel roof ahead of this year's World Economic Forum in Davos, Switzerland. Stefan Wermuth/Bloomberg via Getty Images hide caption 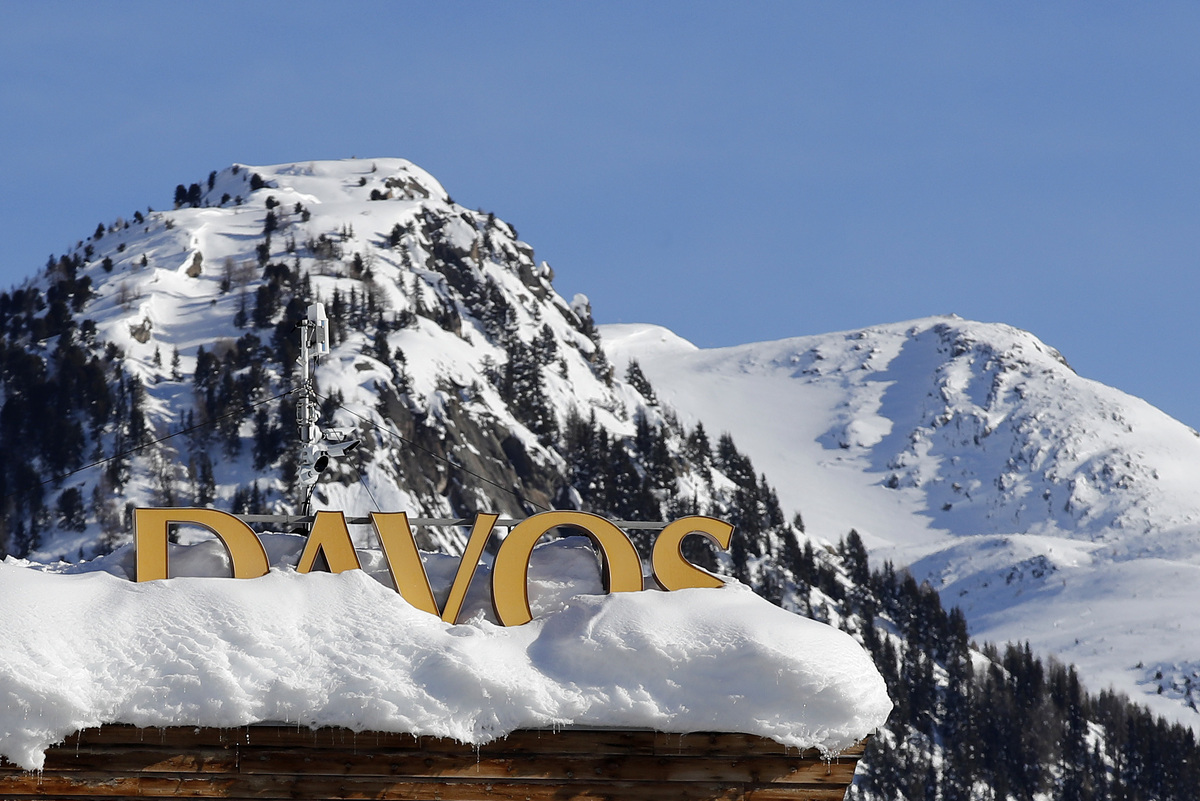 A Davos sign sits atop a hotel roof ahead of this year's World Economic Forum in Davos, Switzerland.

The 50th Davos gathering ended on Friday. It's the annual meeting that critics love to hate. They say the World Economic Forum's event is just a forum for the rich and powerful to feel as if they're making a difference. And that their wheeling and dealing does not include input from the rest of world.

So does the conference actually do any good?

To explore the impact of the prestigious summit on world affairs, we interviewed more than half a dozen leaders in the field of global health, economic development and social justice and asked them to reflect on past efforts at Davos to improve the lives of those in low-income countries.

Although they acknowledged the summit's exclusivity and elitism, on the whole they say that Davos has helped play a role in helping to push through some major global initiatives.

The consensus was that while Davos has some shortcomings, there are key reasons why it has been an effective forum for change.

1. Leaders from different fields can mix...

Nancy Birdsall, senior fellow and president emeritus of the Center for Global Development, says that the conference does bring together people who don't typically interact, including corporate executives, founders of nonprofits and charities and researchers and academics.

Analysis: Why A Chinese Leader Told The Story Of 'A Devil And A Demon'

But it's not just the elite who are invited. Davos organizers also bring in global change makers, such as climate activist Greta Thunberg and Kenneth Roth, head of Human Rights Watch.

It's a rare forum where activists and business moguls can mingle and talk about sustainable ways to improve the world, says Birdsall. On Tuesday, for example, Melati Wiljsen, an 18-year old environmental activist from Bali, Indonesia, shared the stage with top executives, including Salesforce co-CEO Marc Benioff, LinkedIn cofounder and vice president Allen Blue, Deloitte Global CEO Punit Renjen and others. In a group discussion, they talked about how the WEF's new digital crowdsourcing platform can help more youth get involved in achieving the Sustainable Development Goals.

Craig Hanson, vice president for food, forests, water and the ocean at World Resources Institute (WRI), says that he's able to "get several months' worth of meetings done over the course of just four days at Davos" because of "the presence of all the CEOs and other leaders all in one place at the same time."

...but the people most affected by poverty and other issues typically aren't invited

Still, critics say the conference is too exclusive. By targeting global elites, the organizers are "absolutely not inviting the people most affected" by the problems they hope to solve, says Adrienne Sorböm, a professor of sociology at Stockholm Centre for Organizational Research and co-author of a book about the WEF.

Climate change, for example, was a focus of Davos this year, and several studies show that the poor are more affected by climate change — yet people from this population were not proportionately represented on the summit's invitation list.

Women, too, only make up 24% of the 3,000 in attendance this year — although, the WEF notes that that's more than ever before.

As a forum for dialogue, Davos exposes attendees to many subjects and ideas they may not encounter in their everyday lives, says Birdsall. The topics range from automation to climate, from poverty and health to inequality — even to geopolitical peace talks.

Last year, for example, when Mohammed Hassan Mohamud, a Somali refugee, served as co-chair at Davos, his goal was to convey the message that refugees should not just be helpless aid recipients. Instead, he wanted the CEOs and leaders at Davos to think of how they could help them by tapping into their skills — employing them or harnessing their ideas for innovation.

Tax The Ultrarich To Solve Poverty? Easier Said Than Done

Sometimes, it takes years for significant ideas that arise from conversations at Davos to become a reality. For example, in 2015, the BRICS countries (Brazil, Russia, India, China and South Africa), formed a new development bank — called New Development Bank — to help the bloc better mobilize funds for infrastructure and development projects in their countries and other emerging economies. According to London School of Economics professor Nicholas Stern, he and former World Bank chief economist Joseph Stiglitz actually came up with the idea at Davos in 2011.

...but whether they act on them is another story

Ideas don't always result in action, much to the disappointment and frustration of critics. For example, every year since 2013, Oxfam has published a scathing report on inequality ahead of Davos that compares the wealth of the richest 1% of people in the world — many of whom are at Davos — to the rest of the population. Year after year, the report's top recommendations for solving inequality include increasing taxes on the wealthy and closing corporate tax loopholes.

"They decry economic inequality, but they resist the time-tested solutions and inequality grows from year to year," Gawain Kripke, Oxfam America's policy director, wrote to NPR in an email.

3. It serves as a big platform to launch new programs and campaigns...

For many in global development, Davos has become a popular venue for launching initiatives. That's "because of the strong media presence there and because it's an opportunity to get in front of a lot of business and finance leaders," wrote WRI's Hanson to NPR.

For Hanson, that kind of exposure has been "important for addressing big sustainability challenges, such as food loss and waste."

In 2016, WRI launched its own campaign, Champions 12.3, at Davos to build political momentum toward halving per capita global food waste by 2030. The campaign, which is still running today, encourages governments and companies to measure how much food they're wasting so they can better understand where and why it's happening, and improve over time.

Other major initiatives have been announced at Davos. In 2006, musician Bono launched Product Red, an organization that raises money for the Global Fund to Fight AIDS, Tuberculosis and Malaria. It does this by working with brands like Apple and Amazon to sell products with a portion of proceeds going to the Global Fund.

"Davos can be a real amplifier," a (RED) spokesperson wrote to NPR in an email. "(RED) was able to get its idea and name to a big audience immediately."

Perhaps one of the most celebrated programs to be launched at Davos is Gavi, the Vaccine Alliance — a partnership of vaccine manufacturers, governments, donor agencies, philanthropists and researchers that supports immunization programs and vaccination campaigns in developing countries. Since its start in 2000, Gavi claims to have prevented more than 13 million deaths.

In an email to NPR, Sean Simons, the U.S. press secretary for The ONE Campaign, which has lobbied its global membership to support government funding to Gavi, pointed out that solving big global challenges like poverty and health requires the cooperation and commitment from the types of people who come to Davos: international donors, governments and the private sector.

"When all three convene to advance the global public interest, incredible things can happen. Just look at Gavi," Simons wrote. "The billion-dollar question is: How do we ensure the enthusiasm and funding for the development programs launched at Davos continues long after Davos?"