Accessibility links
What Is The Coronavirus: Origin, Symptoms, Treatment, Transmission And More : Goats and Soda The virus was first identified in the Chinese city of Wuhan in December. Here's what we do — and don't — know about this novel coronavirus and the disease it causes, COVID-19. 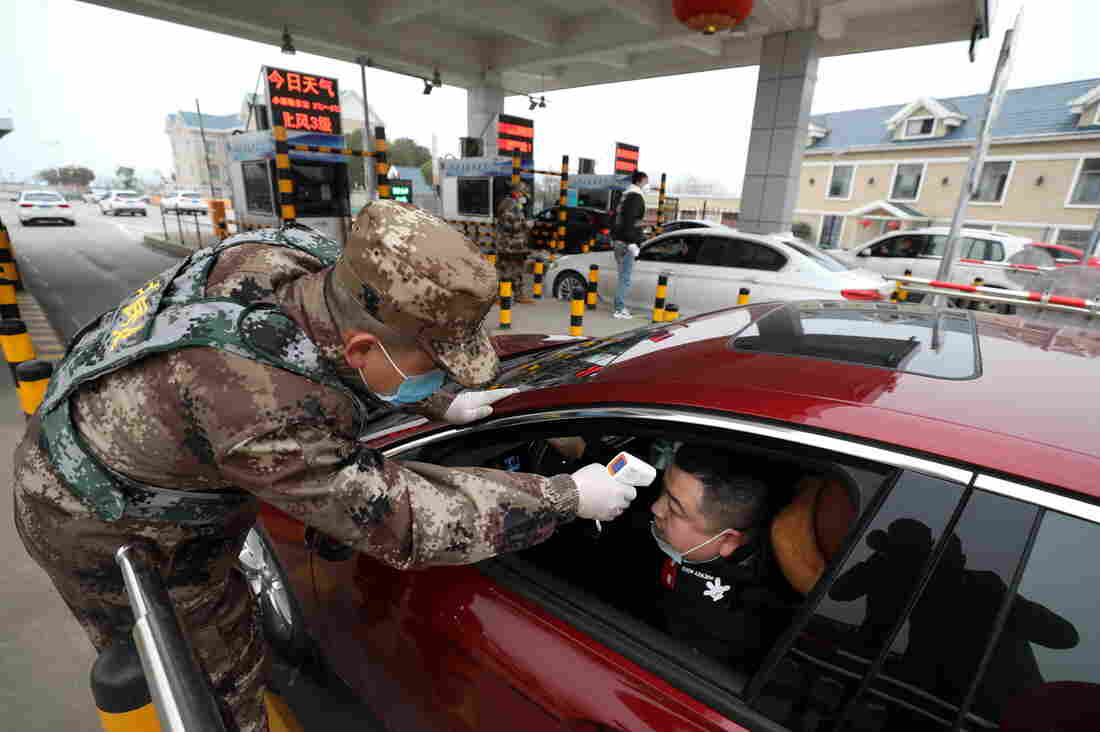 A militia member checks the body temperature of a driver at an expressway toll gate in Wuhan, China. Barcroft Media via Getty Images hide caption 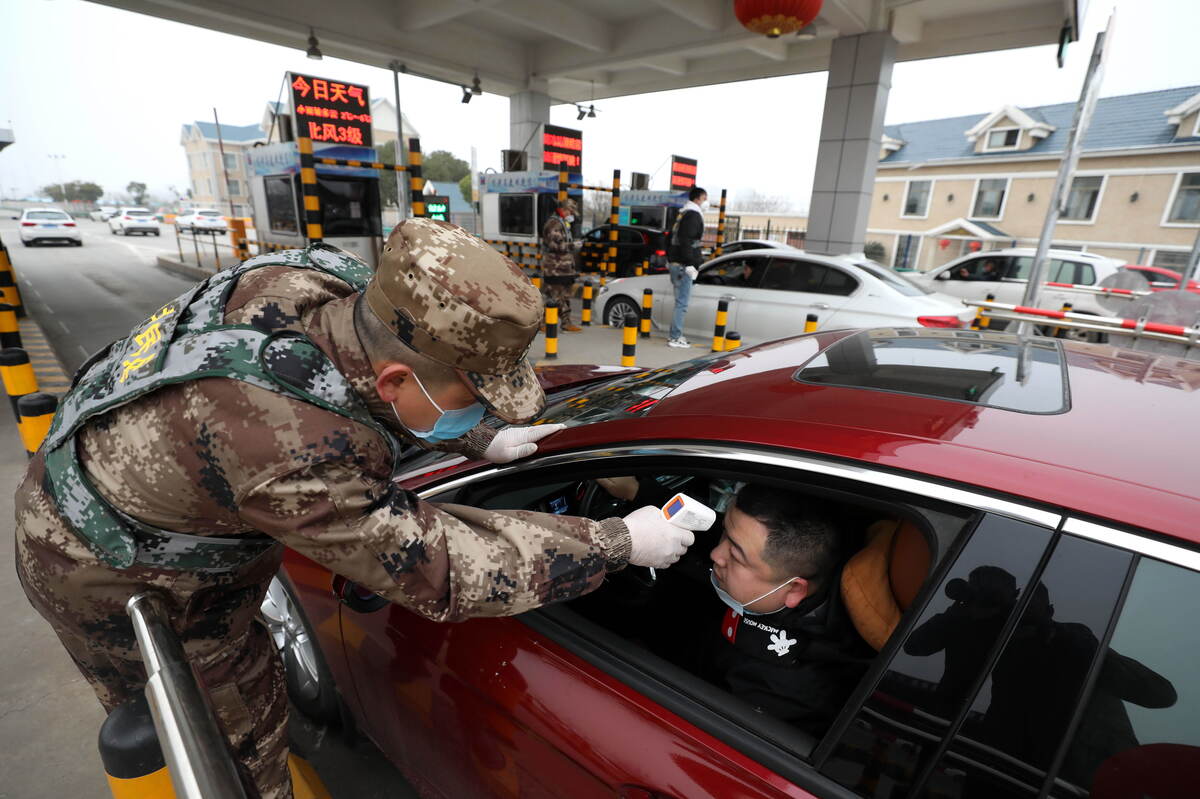 A militia member checks the body temperature of a driver at an expressway toll gate in Wuhan, China.

A new disease first identified in Wuhan, China, in December 2019, and now called COVID-19, continues to spread, primarily in China but cases have also appeared in some two dozen other countries.

Here's what we know so far about this virus, as reported by NPR's daily science podcast Short Wave.

What kind of disease is this?

The outbreak is caused by a coronavirus. Common human coronaviruses cause mild to moderate upper respiratory symptoms, including the common cold, while more severe types can cause pneumonia and death. The name for this kind of virus comes from the crownlike spikes it has on its surface — "corona" is Latin for "crown."

This strain of the virus was initially called 2019-nCoV for now, which is short for "2019 novel coronavirus." On Feb. 11, the World Health Organization gave an official name to the disease it causes: COVID-19. It's only the third strain of coronavirus known to frequently cause severe symptoms in humans. The other two are MERS and SARS.

Where did it come from?

Coronaviruses originate in animals — like camels, civets and bats — and are usually not transmissible to humans. But occasionally a coronavirus mutates and can pass from animals to humans and then from human to human, as was the case with the SARS epidemic in the early 2000s. (SARS stands for "severe acute respiratory syndrome.") China's National Health Commission confirmed that 15 health care workers have become infected, indicating that the virus can spread from human to human.

Most, but not all, of the first known cases in December 2019 were traced to an animal market in the Chinese city of Wuhan and are believed to have come from contact with live animals that were infected. The market has since been closed. Wuhan is a major logistics and transportation hub. It lies about 500 miles west of Shanghai and is home to more than 11 million people.

What are the symptoms? What does this illness feel like?

Early symptoms include fever and dry cough. Some people also experience fatigue, headaches and, less frequently, diarrhea. Shortness of breath can develop about 5 days in.

About 80 percent of cases so far seem to be mild, according to the World Health Organization. "Mild" seems to run the gamut from cold-like symptoms to that flu-like feeling of being hit by a train. Doctors say that patients with this range of symptoms should rest and drink plenty of fluids and self-isolate to avoid infecting others but don't necessarily require hospitalization.

They should, however, make sure to check in with their doctor, especially if they take a turn for the worse. About 20 percent of cases are more severe and require hospitalization. Symptoms in severe cases include pneumonia (which makes it harder to breathe) and kidney failure. The disease can be fatal.

Should someone with a fever be screened for Wuhan coronavirus?

The symptoms of this infection might appear the same as those for a cold or flu, but at this time the Centers for Disease Control and Prevention's guidelines for health care providers suggest screening only people who have recently traveled to Wuhan or who have had close prolonged contact with an infected person. The CDC can confirm the virus with a diagnostic test that it developed based on the genetic sequence of the virus that Chinese health officials obtained and made publicly available on Jan. 12.

Who is at risk of becoming infected?

The World Health Organization's Emergency Committee on the coronavirus said in a Jan. 22 news conference that nearly three-quarters of cases have been in people over age 40 and that "cases who died — many had significant underlying conditions" like cardiovascular disease and diabetes. But there are confirmed cases in otherwise healthy, young individuals.

What treatments are recommended for this virus?

There are no virus-specific treatments for COVID-19. The CDC suggests supportive care to manage and relieve symptoms. Researchers are testing existing antiviral drugs to see if they have an impact on this new coronavirus. There is no approved vaccine available for this virus.

What are the affected countries and regions?

To date, at least 20 countries or places have confirmed cases. At least 430 other cases have been identified in places outside China, including the U.S., Australia, Canada, Finland, France, Germany, Japan, Malaysia, Nepal, the Philippines, Singapore, South Korea, Taiwan, Thailand and Vietnam.

Fifteen U.S. cases have been reported to date. The first U.S. case was reported on Jan. 21, in a man who traveled to China and began experiencing symptoms a few days after returning home to Seattle on Jan. 15. The second case, a woman in Chicago, was confirmed Jan. 24. The sixth confirmed case, reported at the end of January, marked the first instance of human-to-human transmission of the disease in the U.S.; a woman who had recently traveled to China spread the virus to her husband when she returned to Chicago.

Health officials believe the virus can be passed from person to person via exchange of fluids from the respiratory tract, but they still don't know precisely how. The respiratory route seems likely because clusters of cases have been observed within families, whose members have had prolonged close contact with an infected person. There is emerging evidence in Wuhan that the virus can spread from one person to another to another multiple times — the way that a disease like the flu spreads. That's something that global health officials are watching for in international cases.

How serious is this?

This virus is "highly infectious," according to China's Bureau of Disease Prevention and Control. But the agency does not consider the disease to be as virulent as the one that caused the SARS outbreak in 2003. The risk to the general American public is "low," according to the CDC: Most cases have been found in China, and so far international spread seems limited.

What is being done to contain the spread of the outbreak?

Government officials in China have temporarily shut down transportation to and from Wuhan by bus, subway, ferry, airplane and train, according to Chinese state media. At least 12 other Chinese cities have limited travel as well. The travel ban came just days before the biggest holiday on the Chinese calendar: Lunar New Year. Hundreds of millions of people travel every year during this holiday season, starting Jan. 25 and extending into February.

Airports around the world, including in the U.S., have implemented screening procedures for passengers arriving from affected areas. On Jan. 28, the U.S. announced a total of 20 airports will begin screening passengers from China.

On Jan. 27, the CDC and the U.S. state department recommended that travelers avoid all nonessential travel to China.

Have we reached peak coronavirus?

It's too early to tell, scientists say. The main question is, has the transmission rate gone down?

A model built by researchers at Xi'an Jiaotong-Liverpool University, based on publicly available numbers from China's government, shows that the number of new cases outside of Hubei province has started to decline.

But the quality of a model's predictions depends on how well the available data reflects reality. Has the method for confirming cases been consistent over time? Is there an ample supply of test kits so every suspected case is tested? These are open questions.

Meanwhile, on Feb. 13, Hubei province expanded its criteria for identifying new coronavirus infections to include patients who exhibit all the symptoms of COVID-19 but have either not been tested or tested negative for the virus itself. That caused a dramatic spike in reported cases at the epicenter of the disease

Where can I get the latest information?

NPR will continue to report on the outbreak. The CDC is maintaining a traveler's health notice. The World Health Organization has a website for outbreak news. The China Center for Disease Control and Prevention has an epidemic tracker.