Accessibility links
Coronavirus: Americans Evacuated From Wuhan Will Remain At U.S. Air Base For 3 Days : Goats and Soda "These people are not under federal quarantine orders," Dr. Chris Braden of the Centers for Disease Control and Prevention says. 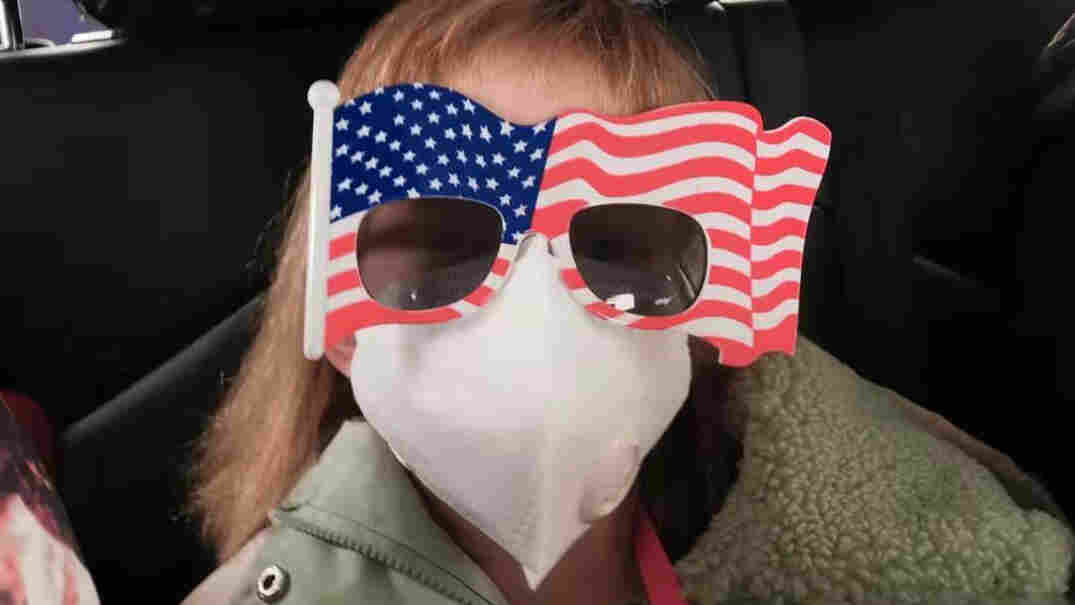 Hermione Dickey, 8, and her mother, Priscilla, head to the Wuhan Tianhe International Airport. They were among the passengers on a U.S. evacuation flight out of Wuhan, China. Priscilla Dickey via AP hide caption 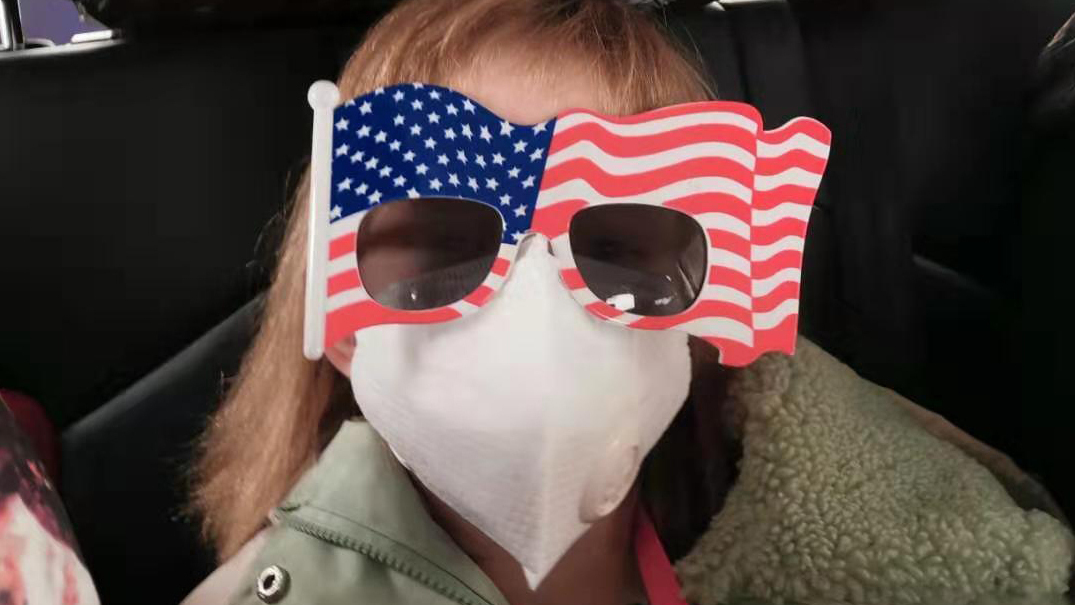 Hermione Dickey, 8, and her mother, Priscilla, head to the Wuhan Tianhe International Airport. They were among the passengers on a U.S. evacuation flight out of Wuhan, China.

The 195 Americans who were evacuated from Wuhan, China, because of the coronavirus outbreak will remain at a military base in Southern California for three days while medical staff monitor their health, federal health officials said Wednesday, as the White House announced the formation of a special task force to handle the U.S. response to the outbreak.

"These people are not under federal quarantine orders," said Dr. Chris Braden of the Centers for Disease Control and Prevention. Instead, the evacuees have voluntarily agreed to a 72-hour "hold" that calls for them to stay at the base both as a precaution and out of concern for others.

Braden said he greeted the passengers after their charter flight, which stopped in Alaska, landed at March Air Reserve Base. "They were happy to be here," he added.

The passengers will stay at the base for three days, they will be actively monitored for the full 14 days of the virus's incubation period, Braden noted.

During the evacuees' stay on base, their blood tests will be sent to the CDC's facilities in Atlanta — meaning their test results should be available within the 72-hour period.

"The CDC Atlanta lab is the only laboratory in the country that is able to do this testing for the novel coronavirus" from Wuhan, said Rear Adm. Dr. Nancy Knight of the CDC.

The health officials faced repeated and pointed questions about the evacuees' status and the three-day wait time during a news conference at the Riverside University Health System Medical Center.

Responding to journalists' questions about hypothetical situations such as an evacuee demanding to leave before the three-day period, Knight said, "They can leave. However, they are sitting in the middle of a military base. Any discussion around departure would be just that – would be a discussion."

Officials previously stated that more than 200 U.S. citizens were evacuated. Later on Wednesday afternoon, Nancy Messonnier, the director of the National Center for Immunization and Respiratory Diseases, indicated that 195 passengers have been screened. She added that State Department employees, medical officers and a pilot were also on board.

Braden said the passengers include children from 1 month old to teenagers. He also said one person had not been allowed to board the plane in Wuhan because they showed signs of being ill.

The evacuees cheered as their plane landed in Alaska late Tuesday. It was a moment of relief and joy, even as health workers rushed to ensure that passengers don't have the respiratory virus.

"The whole plane erupted in cheers when the crew said, 'Welcome home to the United States,' " said Anne Zink, Alaska's chief medical officer. She described the scene as "a moving and uplifting experience."

The chartered airliner — a Kalitta Air Boeing 747 — landed Wednesday morning at the March Air Reserve Base in California's Riverside County, about 65 miles east of Los Angeles. It landed shortly after 8 a.m. local time, according to the flight tracking site Flightradar24.

The flight was organized by the U.S. State Department to get diplomats, their families and other Americans out of Wuhan, the city that is the center of the fast-growing outbreak.

Before they headed to California, the passengers had already undergone four health screenings: two in Wuhan before their flight took off and two after they arrived in Anchorage, Alaska, for a refueling stop and initial processing.

In Alaska, the passengers were "approved to continue on to California by the Centers for Disease Control and Prevention," the Alaska Department of Health and Social Services said in a news release Wednesday. 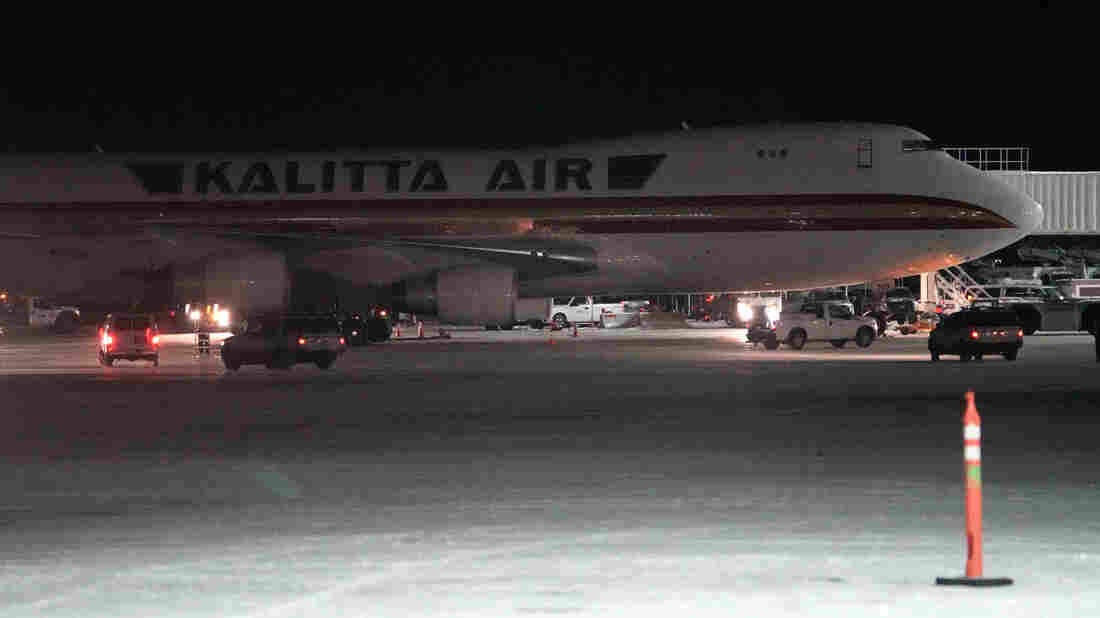 The plane carrying Americans who were evacuated from China because of the deadly coronavirus arrived at a closed terminal in Alaska on Tuesday. Kerry Tasker/Reuters hide caption 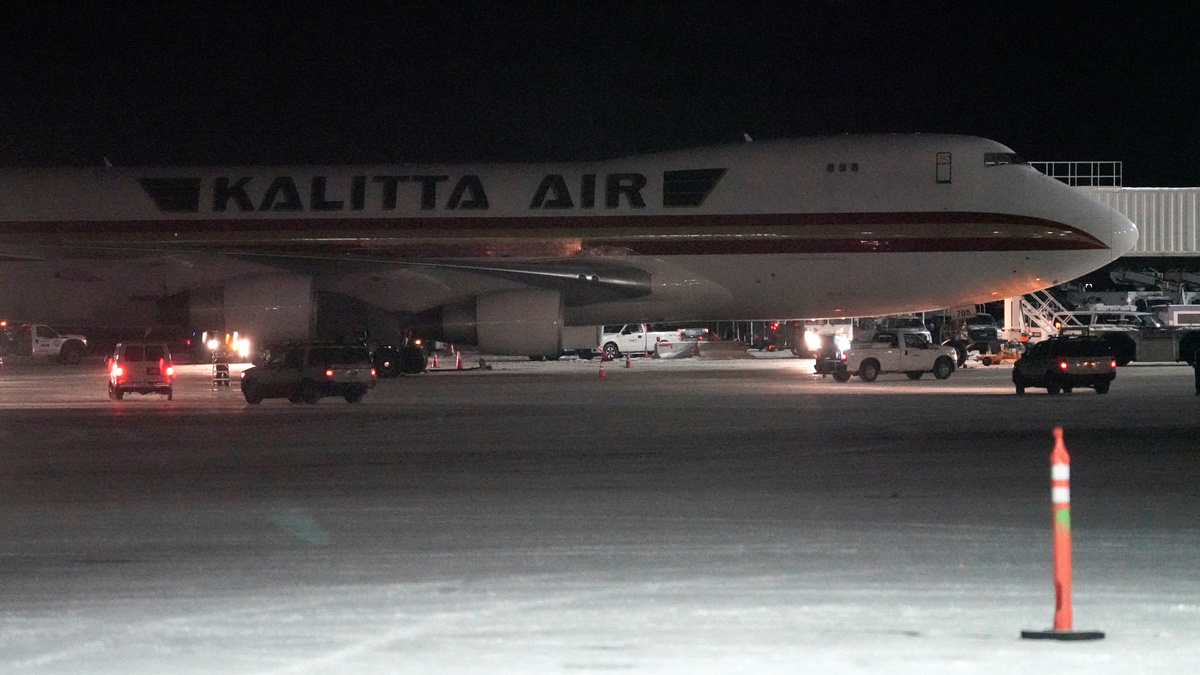 The plane carrying Americans who were evacuated from China because of the deadly coronavirus arrived at a closed terminal in Alaska on Tuesday.

While the evacuees are at the March air base, they will be cared for by the Department of Health and Human Services. In a statement about their arrival, Department of Defense press secretary Alyssa Farah said, "DoD personnel will not be directly in contact with the evacuees and evacuees will not have access to any base location other than their assigned housing."

The evacuees will be closely monitored for any sign of the coronavirus. If anyone falls ill, they will be taken to a local civilian hospital, Farah added.

Meanwhile, in a statement issued late Wednesday, White House press secretary Stephanie Grisham announced that the president was forming a task force to oversee "the Administration's efforts to monitor, contain, and mitigate the spread of the virus, while ensuring that the American people have the most accurate and up-to-date health and travel information." The group would be led by Secretary of Health and Human Services Alex Azar and include several other top administration officials and senior health officials, according to the statement.

Since it was first identified in Wuhan last month, the novel coronavirus, or 2019-nCoV, has killed more than 130 people, all of them in mainland China. There are more than 6,000 confirmed cases, according to a tracking map created by Johns Hopkins.

The vast majority of the cases also are in China, primarily in Hubei province, where Wuhan has been placed under a virtual lockdown in an attempt to prevent the spread of the virus. But cases of coronavirus have emerged in more than a dozen other countries, including the U.S. and Canada.

Several international airlines have suspended or reduced flights to China, from British Airways to carriers in South Korea and Indonesia. Kazakhstan has halted all mass transportation — flights, train and buses — to neighboring China.

Similar to the U.S. evacuation flight, a Japanese flight from Wuhan landed safely in Tokyo on Wednesday.

"Of course, decisions on evacuating citizens is up to the countries," WHO Director-General Tedros Adhanom Ghebreyesus said Wednesday. "But one thing WHO advises is that they have to prepare themselves if there is importation of cases. So they need to really have a thorough understanding, comprehensive, on their actions."

The CDC says that while it considers the immediate risk posed by the coronavirus as "low," travelers should avoid any nonessential travel to China.

"The outbreak is growing and there is limited access to adequate medical care in affected areas," the CDC said earlier this week.

The agency also recommends that people take simple steps to reduce the chances of spreading any respiratory illness, such as washing hands with soap and water for at least 20 seconds and avoiding close contact with anyone who is sick.