Accessibility links
'Wet Market' In China Is Linked To Coronavirus Outbreak. What Are These Markets Like? : Goats and Soda A wet market is a complex of stalls selling fish, meat and wild animals. One such market in Wuhan has been linked to the current outbreak of coronavirus. 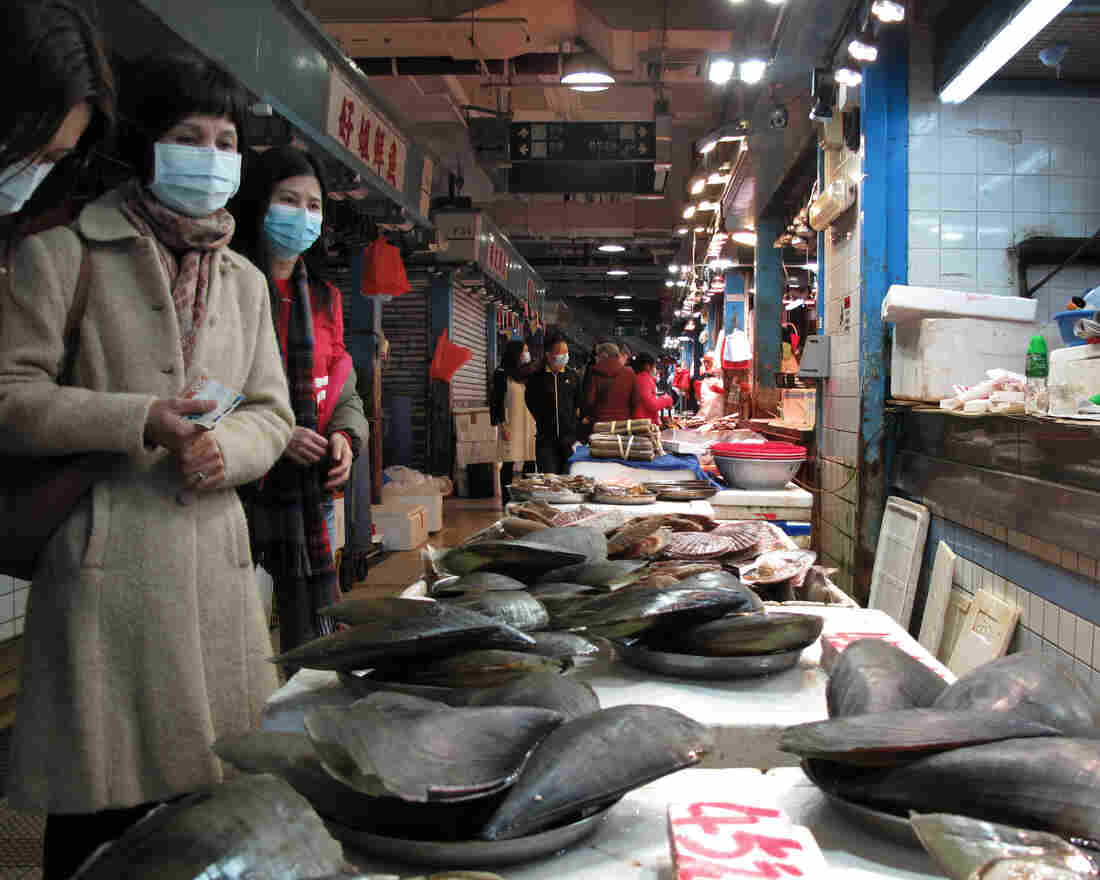 Shellfish for sale in the Tai Po market in Hong Kong on January 29. Many customers come to this market to buy live seafood. Jason Beaubien/NPR hide caption 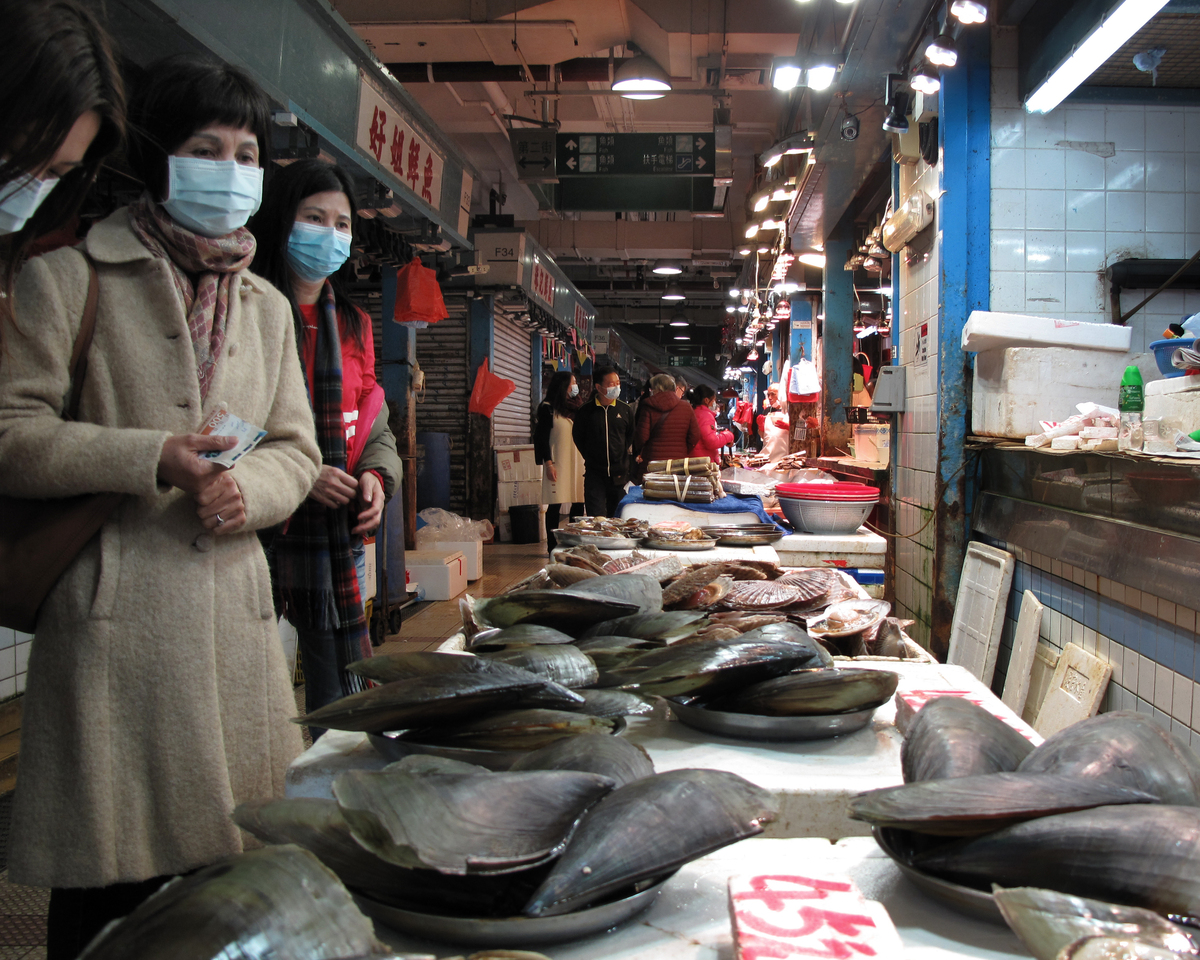 Shellfish for sale in the Tai Po market in Hong Kong on January 29. Many customers come to this market to buy live seafood.

A "wet market" in Wuhan, China, is catching the blame as the probable source of the current coronavirus outbreak that's sweeping the globe.

Patients who came down with disease at the end of December all had connections to the Huanan Seafood Market in Wuhan China. The complex of stalls selling live fish, meat and wild animals is known in the region as a "wet market." Researchers believe the new virus probably mutated from a coronavirus common in animals and jumped over to humans in the Wuhan bazaar.

I visited the Tai Po wet market in Hong Kong, and it's quite obvious why the term "wet" is used. Live fish in open tubs splash water all over the floor. The countertops of the stalls are red with blood as fish are gutted and filleted right in front of the customers' eyes. Live turtles and crustaceans climb over each other in boxes. Melting ice adds to the slush on the floor. There's lots of water, blood, fish scales and chicken guts. Things are wet.

Scenes From The Shekou 'Wet Market' In Shenzhen, China

At the Tai Po market, a woman who runs a shellfish stall — she only wants to give her name as Mrs. Wong — says people blame wet markets for spreading disease. But she says that's not fair. Like just about everyone else in the market. Wong is wearing a surgical face mask because of the coronavirus outbreak. She's heard about the links between the wet market in Wuhan, China, and the coronavirus but doesn't think something like that would happen in Hong Kong.

"It's much cleaner in the Hong Kong markets. It's so different from what's happening in mainland China," she says. "When I go to mainland China and I'm trying to eat something, I'm concerned about what's in the food."

Meanwhile, this kind of market is not just an Asian phenomenon. There are similar markets all over the world — places where fish, poultry and other animals are slaughtered and butchered right on the premises.

But researchers of zoonotic diseases — diseases that jump from animals to humans – pinpoint the wet markets in mainland China as particularly problematic for several reasons. First, these markets often have many different kinds of animals – some wild, some domesticated but not necessarily native to that part of Asia. The stress of captivity in these chaotic markets weakens the animals' immune systems and creates an environment where viruses from different species can mingle, swap bits of their genetic code and spread from one species to another, according to biologist Kevin Olival, vice president for research at the EcoHealth Alliance. When that happens, occasionally a new strain of an animal virus gets a foothold in humans and an outbreak like this current coronavirus erupts.

The Tai Po market in Hong Kong does have some live animals besides the seafood but the selection is rather boring compared to the exotic assortment of snakes, mammals and birds on offer in some markets in mainland China. They're known to sell animals such as Himalayan palm civets, raccoon dogs, wild boars and cobras.

The only live birds in Tai Po are chickens, which are kept behind the butchered pork section of the market.

Chan Shu Chung has been selling chicken here for more than 10 years. He says business is really good right now because the price of pork — his main competition — is through the roof. Pork is in short supply due to trade tensions between China and the U.S. and a recent bout of swine flu. 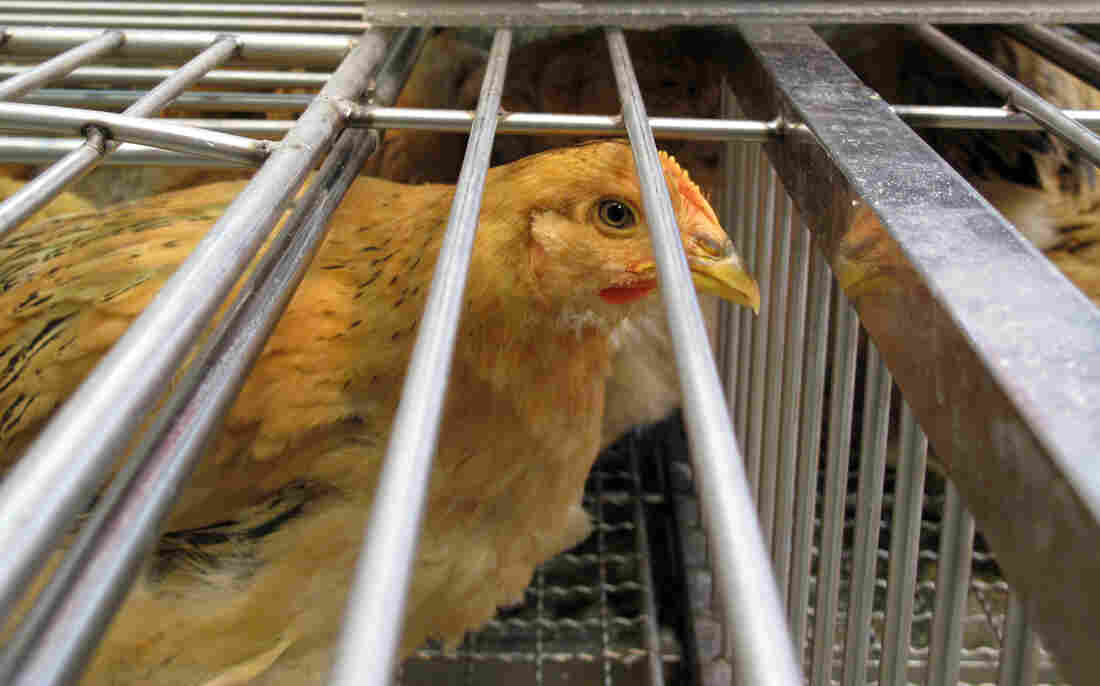 A chicken for sale at the Tai Po market in Hong Kong. Customers say that buying chickens that are slaughtered on the spot makes them feel that they're getting meat from fresh, healthy birds. Jason Beaubien/NPR hide caption 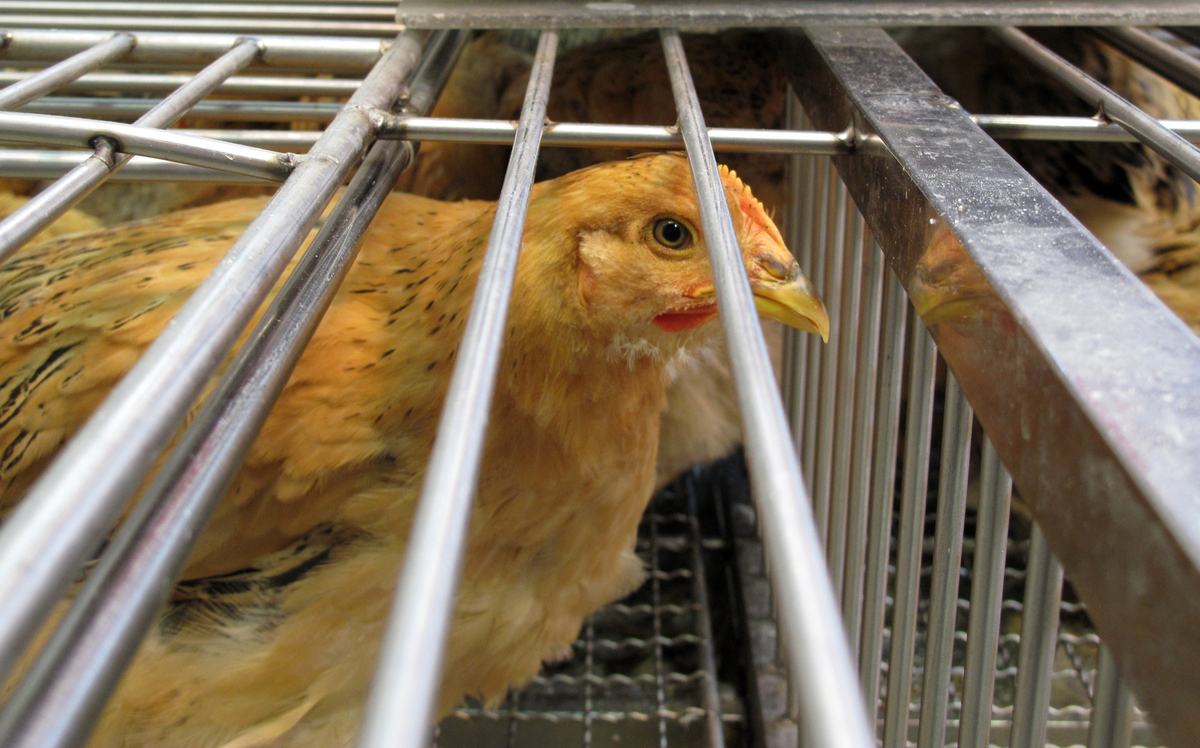 A chicken for sale at the Tai Po market in Hong Kong. Customers say that buying chickens that are slaughtered on the spot makes them feel that they're getting meat from fresh, healthy birds.

So people are buying more chicken. Customers can select a live bird from Chung's cages. Chung pulls them out by their feet, holds them upside down to show off their plump breasts. If the customer is happy with the bird, Chung puts a plastic tag with a number on the chicken's foot. He gives the customer a matching tag, sort of like a coat check. Fifteen minutes later the shopper can come back and pick up the chicken meat.

Chung says he and his colleagues do their best to keep the area clean. They wash down the stalls regularly and disinfect the countertops to stop germs from spreading.

Chung, however, is one of the few people in the market who is not wearing a face mask. Face masks have become so common in Hong Kong since the coronavirus outbreak started that pharmacies across the city are sold out of them.

Chung adds confidently that he's even immune to SARS — for which there also is no commercially available vaccine.

But he does keep his chicken stalls incredibly clean, which public health officials say is one important step in stopping the spread of diseases. So maybe he's on to something.

An earlier version of this story incorrectly spelled the name of the Huanan Seafood Market in Wuhan, China as Hunan.