Accessibility links
How Coronaviruses Jump From Animals To People: David Quammen Explains : Goats and Soda Science writer David Quammen says the new coronavirus is the latest example of the way pathogens are migrating from animals to humans with increasing frequency — and sometimes deadly consequences. 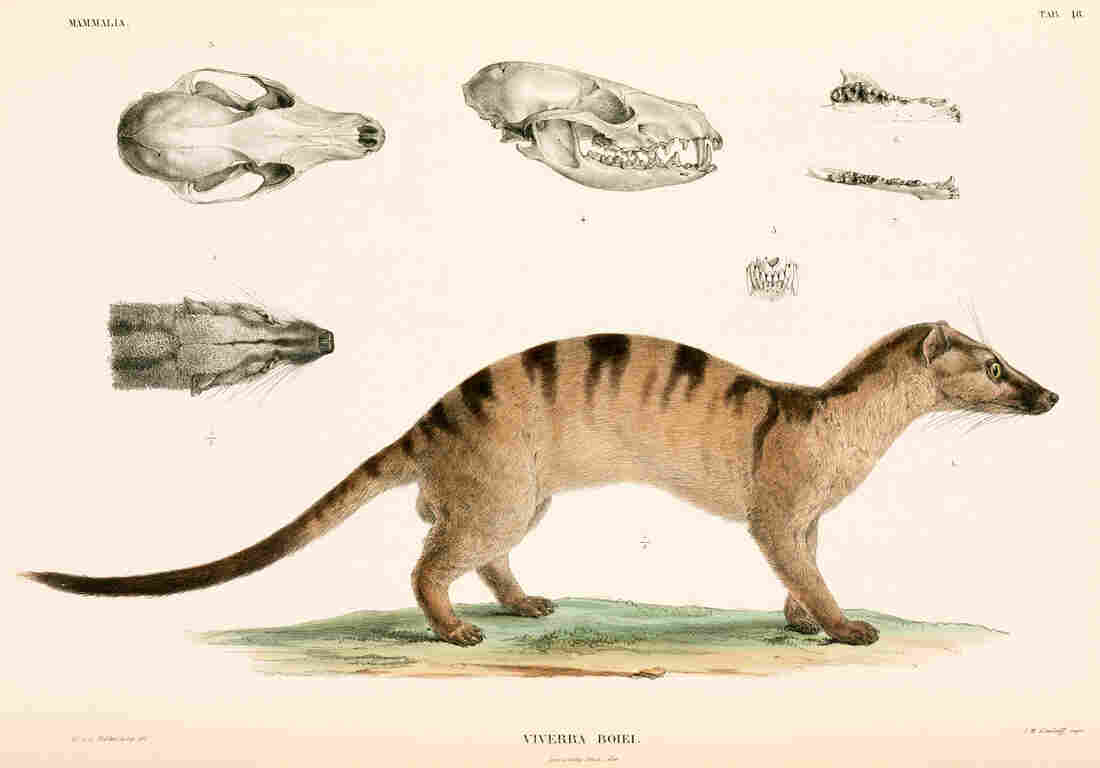 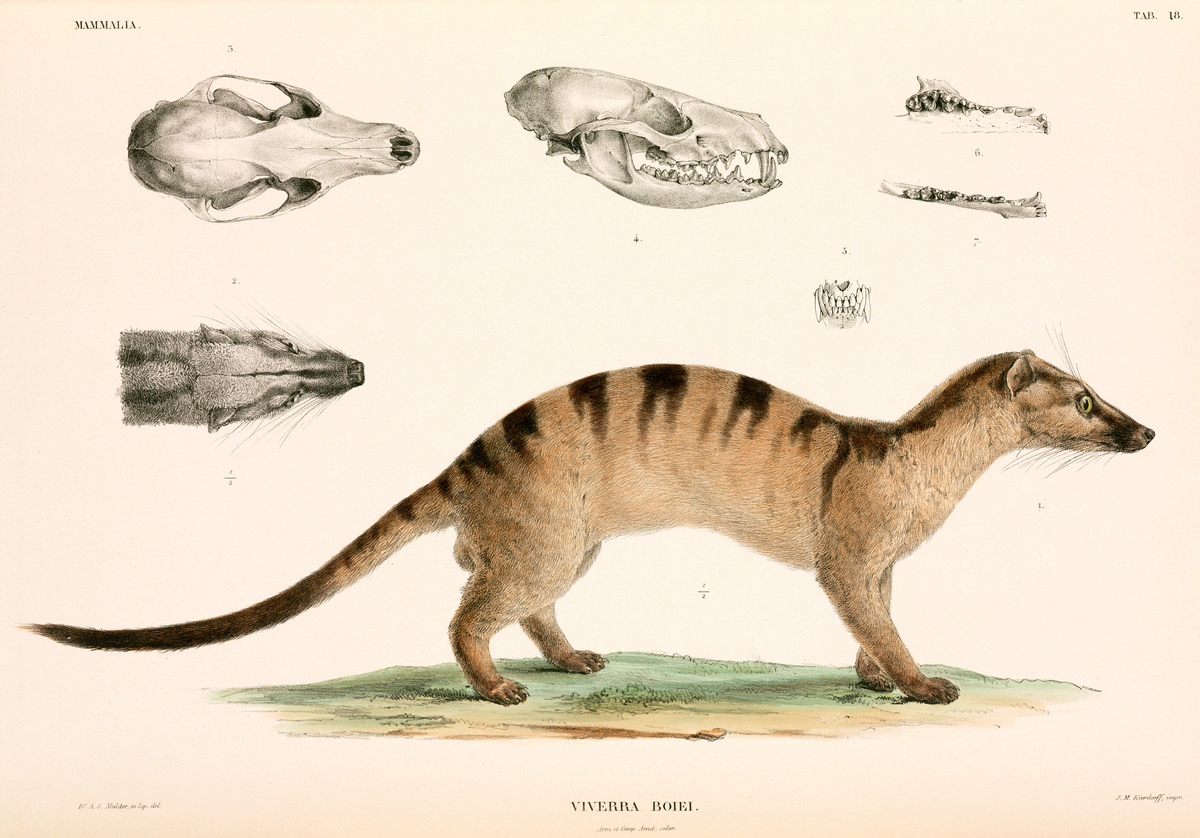 The civet (above), a mammal in the mongoose family, was a carrier of another coronavirus — SARS. But it turned out in that instance that bats were the original source of the virus.

The new strain of coronavirus that has killed hundreds of people in China and caused a travel lockdown of some 56 million people has been classified as a "zoonosis" because of the way it spreads from animals to humans.

Science writer David Quammen says the virus, which the World Health Organization last week declared a global health emergency, is just the latest example of how pathogens that start in animals are migrating to humans with increasing frequency — and with deadly consequences.

"When there's an animal host, then it becomes much, much more difficult to eradicate or even control an infectious virus," Quammen says. "This novel coronavirus — whether or not it turns out to be a huge catastrophe, or something we can control — one thing we know is that it won't be the last."

Quammen's 2012 book, Spillover: Animal Infections and the Next Human Pandemic, traces the rise of different zoonoses around the world, including AIDS, Ebola and severe acute respiratory syndrome (SARS). He says that one of the first questions that arise with any zoonosis pertains to the animal host: How is it being transmitted?

In the case of the new coronavirus, researchers believe that the virus may have originated with horseshoe bats in China and then could have possibly spread to other animals — which people then ate.

In Quarantined Wuhan, Hospital Beds For Coronavirus Patients Are Scarce

Quammen notes that humans are the common link in all zoonoses: "We humans are so abundant and so disruptive on this planet. ... We're cutting the tropical forests. We're building work camps in those forests and villages. We're eating the wildlife," he says. "You go into a forest and you shake the trees — literally and figuratively — and viruses fall out."

Quammen says that the new coronavirus should be taken seriously. But he also warns against panic: "Being educated and understanding it and being ready to respond and support government response is very useful. Panicking and putting on your surgical mask every time you go on a subway ride, an airplane, is not nearly as useful."

On wild animal "wet" markets where viruses can mix 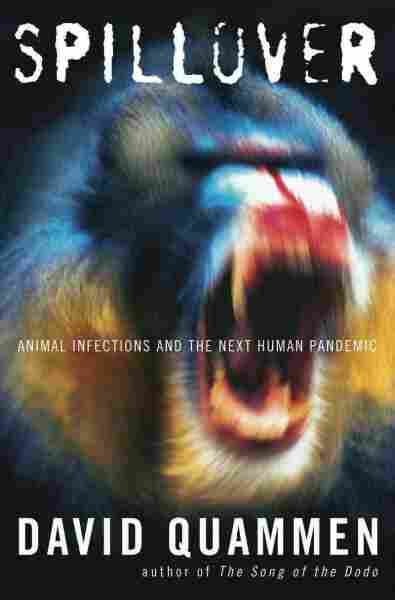 When I was in southern China researching [Spillover], only briefly, I got to see some of these markets where all forms of wild animals were on sale. ... By the time I got there, [these sorts of markets] had gone underground ... suppressed after the SARS outbreak. But then [the markets] gradually came back ... allowed to continue again and proliferate when this new virus began.

The civet is a type of mammal that belongs to the family of mongooses. But it's a medium-sized animal, and it is both captured from the wild for food and captive-bred and raised for food, and it was the first big suspect in the SARS outbreak. It was found that some of the people who got sick very early on had eaten butchered civet. And they tested some civets, and they found evidence of the virus. They found antibodies or fragments of DNA or RNA in these civets, suggesting that they had been infected with the virus. And that didn't prove they were the reservoir host, but it made them the No. 1 suspect, until a couple of Chinese scientists did further work and they established that, in fact, the virus was not living permanently in the civet population in the wild or in captivity. It [had] a different reservoir host. It was living in bats and had passed, presumably, at a market somewhere. It had passed from a bat into one or more civets, and they became the amplifier host. ...

Thousands of civets in captivity were butchered and electrocuted and smothered and drowned in this first, panicked blind reaction in China to the SARS outbreak.

On why bats are often hosts for viruses

Bats are implicated in what seems to be more than their share [of zoonoses]. There are a lot of different species of bats. One-quarter of all mammal species are bats. But there are other things [special] about them — including aspects of their immune system. There have been some discoveries lately that bat immune systems are "downregulated" in a certain way that allows for the metabolic stresses of being a mammal that flies. And the downregulating of the immune system to avoid overreaction to those stresses seems, perhaps, also to create an environment in which viruses are more tolerated in bats than in other mammals.

On how coronaviruses have evolved through different species

One of the reasons SARS could adapt from bat to civet to human is the fact that it is a coronavirus, which is a group of viruses that are very readily adaptable. Experts call that intrinsic evolvability. Their rate of mutation is very high when they copy themselves. Their genome contains a lot of mistakes, and that represents mutations that are sort of the random raw material for Darwinian evolution. So viruses that have high mutation rates are able to evolve quickly and adapt quickly. And coronaviruses ... have that characteristic.

On more public investment and research on new viruses

Read an excerpt of Spillover

This is absolutely a matter of need for more public investment, more public education, adequately funding, richly funding our CDC, the disease programs through the U.S. Agency for International Development, the World Health Organization, the equivalent organizations in Great Britain, France, China ... and the other institutions and countries around the world. Yes, we need to be training scientists who will become virus hunters, who will go into those caves in those forests doing the hard, dangerous work and will go into the laboratories doing the molecular work to help us identify these viruses. And we need our public health officials to be ready with resources and information to deal with these outbreaks — by containment, contact tracing, quarantine [and], when it's necessary, isolation. We need more resources, and we need more skills.

Lauren Krenzel and Joel Wolfram produced and edited this interview for broadcast. Bridget Bentz and Molly Seavy-Nesper adapted it for the Web.