Accessibility links
Critics Say China Has Suppressed And Censored Information In Coronavirus Outbrea : Goats and Soda They charge that news of a new pneumonialike illlness was kept from the public for weeks — and that social media accounts are being shut down if certain types of comments are made. 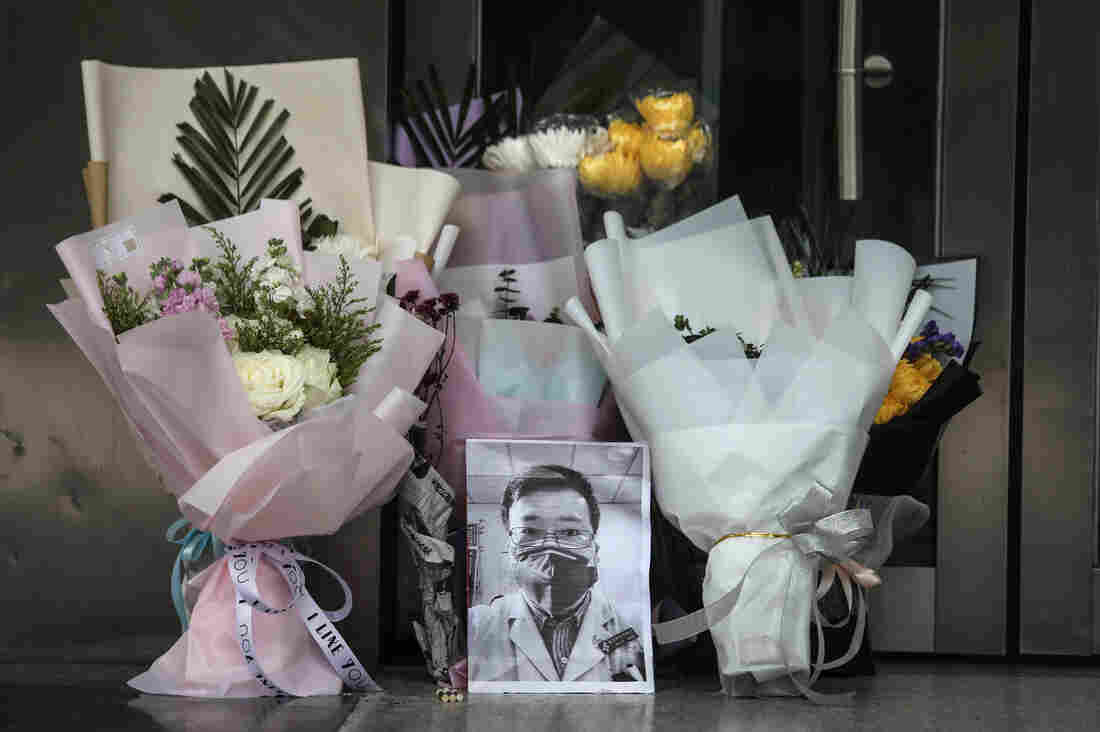 Flowers and a portrait of Dr. Li Wenliang is left at his hospital in Wuhan, China. Li, regarded a whistleblower in the coronavirus outbreak, died of the infectious disease on Friday. Getty Images hide caption 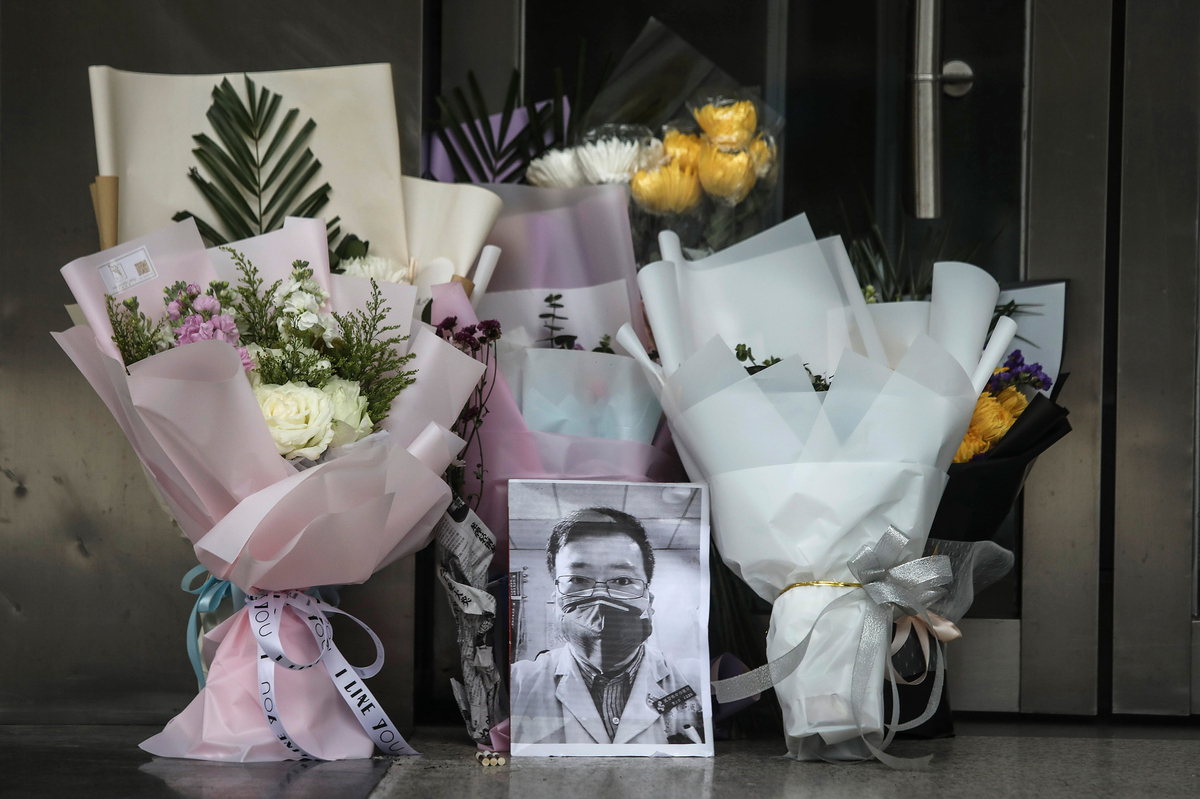 Flowers and a portrait of Dr. Li Wenliang is left at his hospital in Wuhan, China. Li, regarded a whistleblower in the coronavirus outbreak, died of the infectious disease on Friday.

For the last two weeks, Eden Chen had been glued to her WeChat. A resident of the Chinese coastal city of Wenzhou, Chen and her family had been told to stay indoors, sending only one member out every other day to buy groceries. WeChat, the ubiquitous social media app in China, became an indispensable channel for checking up on relatives, exchanging information about quarantine measures and even getting on a waiting list to order now-scarce face masks.

Then on Wednesday evening, Chen's WeChat account — along with thousands of others over the coming hours — was suddenly sealed off. Chen, who exclusively uses WeChat to communicate with people, lost contact with hundreds of friends and relatives.

"Is writing a few sentences about the lack of face masks now enough to get one's account suspended?" said Chen. "I do not do anything to disrupt the country." She also said she "sent around some official notices and state media stories regarding the [coronavirus] epidemic."

China's state censors have clamped down this week on digital items related to the outbreak of a new coronavirus, removing local news reports that expose the dire circumstances in the city of Wuhan, epicenter of the outbreak, and scrubbing social media platforms of posts from Wuhan residents who say they are ill and desperate for medical care and supplies.

Those restrictions were put to the test on Friday after the death of Dr. Li Wenliang, one of the eight whistleblowers reprimanded by police for warning others about a mysterious pneumonialike disease in December. Less than 90 minutes after his death on Friday morning, the hashtag "I want freedom of speech" was trending on Weibo, a popular Chinese blogging site, with nearly 2 million posts. The posts were gone by sunrise.

It’s 5 am in China right now, but many people did not sleep tonight — hashtag “I want freedom of speech” started to trend on Weibo from 1 am and now has nearly 2 million views. pic.twitter.com/CA6lqy4ey2

This chokehold on information, now six weeks after the first public reports of a pneumonialike illness surfaced on Dec. 30, heralds a new stage in the Chinese state's response to the new coronavirus.

"We are also seeing these restrictions being accompanied by intensified propaganda," says Maria Repnikova, a global communications professor at Georgia State University. "The message being: We get that this is a grave problem, and we are fixing it."

First, for nearly four weeks, the municipal government officials in Wuhan worked to hide the severity of the disease. Then, when scientific disclosures made it untenable to downplay the crisis, regional authorities began placing quarantines unprecedented in scale and intensity over large swaths of the country.

Now, China is working to reestablish control over the narrative by shutting down individual social media accounts and reigning in aggressive local coverage of initial government missteps that may have contributed to the spread of the coronavirus beyond the city of Wuhan.

As of Friday, there were more than 31,000 confirmed cases and 630 deaths in China alone, though because of limited diagnostic and treatment capacity in Wuhan, some doctors believe that the number of cases is likely higher. 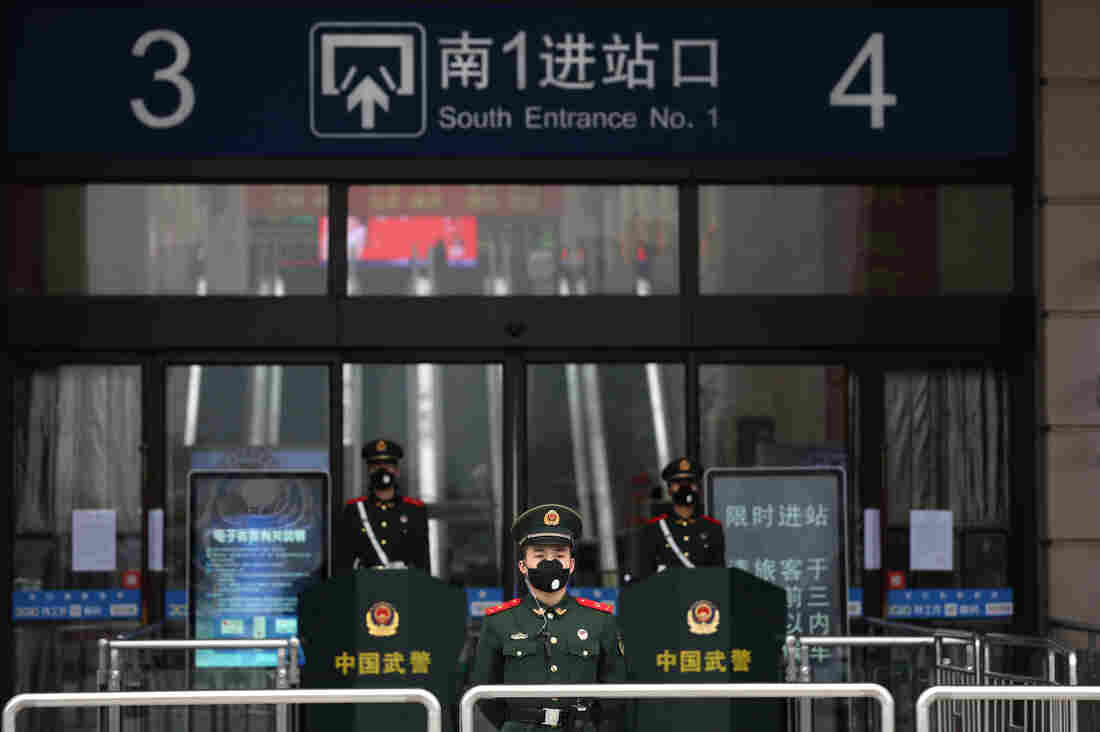 On Christmas Day, Dr. Lu Xiaohong, the director of gastroenterology at Wuhan Municipal Hospital, received alarming news: Several medical staff at two hospitals in the city had been infected with an unknown type of pneumonia. "That suggested the contagiousness of this virus was very strong," Lu later told the state-run China Youth Daily. It also suggested the mysterious virus could be transmitted between humans.

Lu was not the only one who noticed something amiss. Five days later, at least two doctors independently of each other began quietly warning other medical staff about several patients exhibiting pneumonialike symptoms after having visited the same seafood and live animal market in Wuhan.

One of those doctors was Xie Linka, an oncologist at Wuhan Union Hospital. Her colleagues in the hospital's respiratory unit had taken in "many patients" exhibiting an unknown pneumonia. "Be sure to wear masks and ventilate areas," she posted in a group on WeChat, the Chinese messaging app.

Li, an ophthalmologist at Wuhan Central University, also warned a group of about 150 alumni in a WeChat group that "seven SARS patients," all connected to a local seafood market, were being quarantined at his hospital. He believed that they were exhibiting a related coronavirus that had swept through parts of Asia and other countries starting in 2002 but was effectively quashed, with no new cases since 2004.

On Dec. 31, Wuhan's city health commission had already put out a statement, acknowledging 27 cases of unknown pneumonia but said there was no evidence of human transmission of the disease. "The disease is preventable and controllable," it reassured residents. But the suspected origin of the virus — Wuhan's Huanan Seafood Wholesale Market — would be closed and cleaned, just in case.

The turning point came on Jan. 20 when Dr. Zhong Nanshan, a senior health official who had helped expose the government's cover-up during SARS, revealed on state television that the new coronavirus is capable of human-to-human transmission — a full three weeks after Lu, the gastroenterologist, had heard as much from her colleagues.

On the same day, China's top leader Xi Jinping broke his silence. "It is of utmost importance to prevent and control the disease outbreak," the state news agency quoted him as saying. Three days later, authorities made the most drastic decision of all to contain the viral spread: Wuhan, a city of 11 million, would be sealed off from the rest of the country.

Stage 2: Lock it down

The decision by Wuhan authorities to shut down outbound transports came in the early hours of Jan. 23. With only hours to spare before all trains and planes were prohibited from departing, residents with cars rushed to highways. Those who didn't own cars and wanted to leave turned to carpooling services – but at 10 times the usual fare.

A senior party official from Hubei province referred to the citywide lockdown as a "wartime measure" and called on local cadres of minor officials to closely monitor residents for any early symptoms of the new virus.

Although sealing off Wuhan may have slowed the spread of the outbreak, it did not contain it. Before the quarantine, 5 million people were able to hastily leave the city, Mayor Zhou Xianwang later admitted.

Cities outside the official quarantine zone have adopted their own drastic measures to limit movement. Remote villages have bottled in their residents in an effort to stop the virus from entering their communities. Other villages have torn up roads or built hasty barricades to keep migrant workers out. Various cities in coastal Zhejiang province now only allow one person per household to leave for groceries every two days.

As the number of cases, particularly in the city of Wuhan, continue to climb, authorities are turning to even more extreme measures. On Thursday, a top Chinese official urged local officials and residents in Wuhan to report anyone they see with symptoms and to send loved ones with symptoms to new, mass quarantine centers.

"There must be no deserters during a state of war. Those that do will be nailed to the pillar of shame for all of history," Vice Premier Sun Chunlan warned in an article in the party's flagship newspaper after visiting Hubei province. "Be selfless, and race against time. We must go all out to solve the problem of inaccurate, inadequate implementation."

Within the quarantine zone, people have been confined to their apartments or new mass quarantine wards. But online, information began to proliferate.

Muckraking Chinese journalists have been publishing interviews with doctors with damning details that sometimes contradict official accounts. One piece, since deleted by censors, alleges the official tally of infected patients is far lower than the true scale of the outbreak, citing several Wuhan doctors.

To counteract the critical coverage of the Wuhan quarantine, the Communist Party's publicity department dispatched over 300 reporters from state media agencies to Wuhan and Hubei province earlier this week.

Not long after, authorities began turning to a more familiar tool for narrative control: censorship.

Government cyberspace regulators mandated in a notice on Wednesday that the country's biggest Internet companies, including Tencent, Baidu and ByteDance, "conduct special supervision" on epidemic-related news. Soon after, social media platforms, including WeChat, began suspending accounts found to have spread "sensitive information or illegal content," according to screenshots of sealed accounts. Tencent did not respond to a request for comment in time for publication.

"I think what this act is telling us is that the discussions online are entering into the zone of perceived sensitivity for the state," says Repnikova of Georgia State University. While earlier, uninhibited reporting provided valuable public knowledge about the outbreak, "it's evident that more supplies and more diagnostic equipment are needed. The benefit of allowing more social media critique is also getting slimmer."

One of the thousands of WeChat accounts suspended this week belonged to Triv Wen, a Beijing municipal engineer. His apparent offense: sharing an article that accused the Wuhan Red Cross of withholding much-needed supplies like masks from hospitals. (Earlier this week, the Hubei government fired the vice president of the provincial Red Cross for "malpractice and dereliction of duty.")

"All I hope is that the people have the right to hold the government accountable rather than to be managed," Wen told NPR, whose parents are both card-carrying members of the Communist Party. "From the bottom of my heart, I want everything to become better and speech to be more open and transparent."

In one of his last interviews before his death, with independent Chinese media outlet Caixin, Li said helping the public learn about the truth was far more important to him than getting justice for himself: "A healthy society should not have only one kind of voice."