Accessibility links
Why Don't Bats Get Sick Even Though They Carry Many Viruses? : Goats and Soda The winged mammal has a unique ability to carry viruses and not get sick from them. This tolerance may be a unique adaptation to flying. 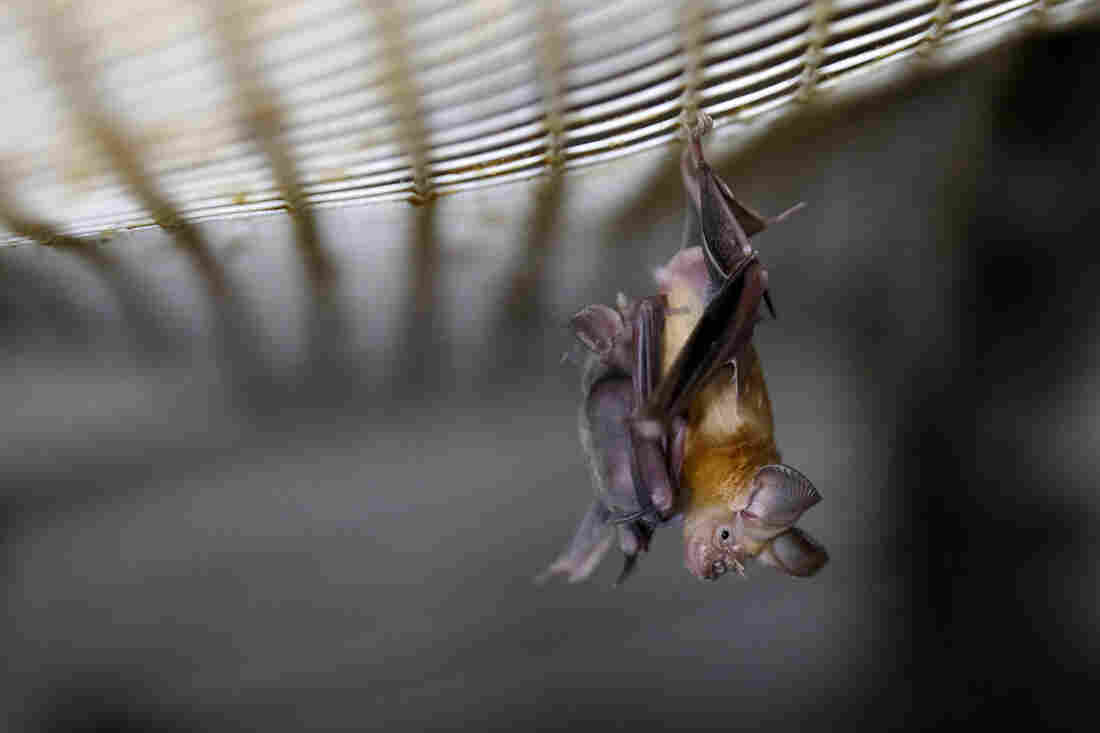 A horseshoe bat. Bats are known to carry many different strains of viruses but do not get sick from them. Menahem Kahana/AFP via Getty Images hide caption 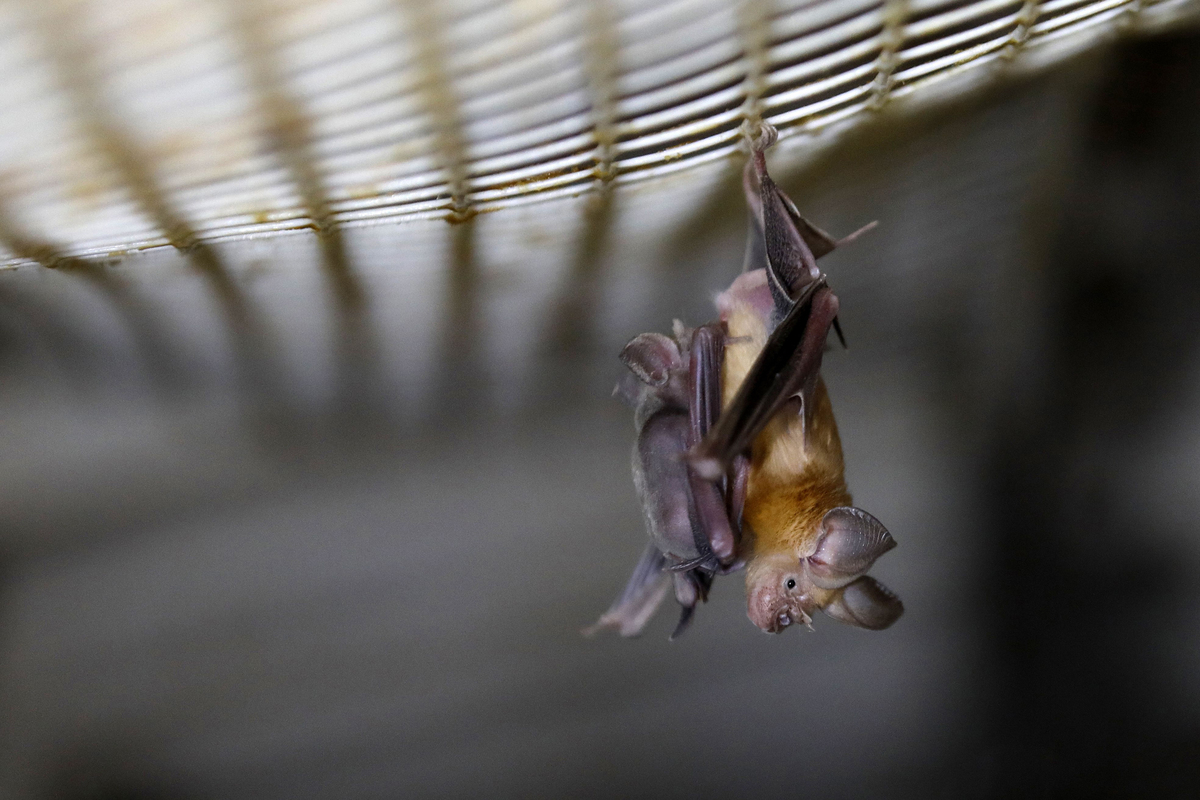 A horseshoe bat. Bats are known to carry many different strains of viruses but do not get sick from them.

Like Ebola virus in Africa and the Nipah virus in Asia, the new coronavirus — 2019-nCoV — appears to have originated in bats.

Chinese researchers took samples of the coronavirus from patients in Wuhan, the city in central China where the outbreak was first detected.

They compared the genetic sequence of the new coronavirus — 2019-nCoV — to a library of known viruses and found a 96% match with a coronavirus found in horseshoe bats in southwest China. The findings were published in a study in Nature this week.

"They're too close in terms of their pure genetics to say they're not related, or that they didn't have a common ancestor," says Vineet Menachery, a virologist at the University of Texas Medical Branch at Galveston who was not affiliated with the study.

Menachery and many other researchers think this new coronavirus spread from bats to humans, with a possible stop with another animal in between.

It's happened with other coronaviruses. In the case of the SARS (Severe Acute Respiratory Syndrome) outbreak, from 2002-2003, a bat coronavirus jumped to civets, a member of the mongoose family, and was sold to people as food at markets. The MERS (Middle East Respiratory Syndrome) outbreak, first detected in 2012, was caused by a coronavirus that jumped from bats to camels to people who maybe drank raw camel milk or ate undercooked meat.

So why do so many infectious diseases emerge from bats?

First, bats carry a great variety of viruses — and the viruses they carry seem more likely to spread to people. Kevin Olival, vice president of research at EcoHealth Alliance, U.S.-based nonprofit, says scientists aren't completely sure why, but it may have to do with the families of viruses that some bats tend to carry. There are over 130 different kinds of viruses found in bats.

Second, bats and humans have a lot of contact. There are billions of bats and more than 1,300 different species living on every continent except Antarctica. "There's a lot of viruses we're finding in bats because there's a lot of bats out there," says Rebekah Kading, who researches emerging infectious pathogens at Colorado State University.

They roost in huge, crowded colonies together. Members of different bat species share caves and hollowed out trees in groups up to the millions, where viruses can pass easily between them through close contact with each other.

They have long lifespans relative to their size, and can live for more than 30 years. "So there's a long time for them to be persistently infected with the virus and shed it into the environment," Kading says. Bat viruses are shed through urine, feces and saliva. Outbreaks of Nipah virus in Bangladesh have been linked with date palm sap collected from trees that bats had licked or urinated on.

Meanwhile, you might be wondering: Why aren't the bats themselves affected by the viruses?

It turns out that the answer to that question has to do with the bat's status as the world's only flying mammal.

During flight, a bat's body temperature spikes to over 100 degrees Fahrenheit. Its heart rate can surge to more than 1,000 beats per minute.

"For most land mammals, these are signals that would trigger death," says Linfa Wang, who studies bat viruses at Duke-NUS Medical School in Singapore. But bats live it every day.

Wang says it seems that bats have developed special immune systems to deal with the stress of flying.

Their bodies make molecules that other mammals don't have, which help repair cell damage. And their systems don't overreact to infections, which keeps them from falling ill from the many viruses they carry (and also prevents conditions like diabetes and cancer).

This shows that it's not always the virus itself but the body's response to the virus that can make us sick, explains Wang.

Olival at EcoHealth Alliance says let's be clear: it's not the bats' fault that people are getting diseases. "They've just sort of coevolved with these viruses and these bugs that basically don't cause them any harm."

The problem, he says, is when the viruses jump to new species. And it's human activity that makes that likely to happen.

In wildlife markets, like the one in Wuhan, Olival says animals that would rarely mix in nature come together. A bat in a cage could be stacked over a civet. And those animals are then mixed with humans — for example, butchers handling animals without gloves.

"The way that we're coming into contact with these animals, hunting, selling, and trading them is to a scale that really we haven't seen before," he says.

Investigators found traces of the virus in 22 stalls and a garbage truck at the Huanan Seafood Market in Wuhan, which also sold live animals. The market was shut down in early January, as it was tied to many of the early cases.

While the animal in the middle is still a mystery (some early reports point to pangolin), Wang says it's easy to imagine how an infected animal could spread the virus to humans. "The animal can sneeze, the animal can urinate," he says, "If a human touches [it] and blows their nose or whatever — they've got it." Infection could also spread through eating undercooked meat.

And bat researchers stress that bats aren't just a possible source of viruses. They play a hugely important role in Earth's ecosystem. They eat tons of insects and pollinate plants and disperse seeds for hundreds of plant species. And they've found a way to coexist with the viruses they carry — which means, says Wang, that even though bats may be the source of viruses that affect humans, they could also be the source of potential therapies if we study their immune systems.