Accessibility links
China Reports Total Of More Than 1,000 Deaths In The Country From Coronavirus : Goats and Soda The Tuesday figures come as the head of the World Health Organization warns that a few cases of 2019-nCoV that have been spread by people who never traveled to China could be "the tip of the iceberg." 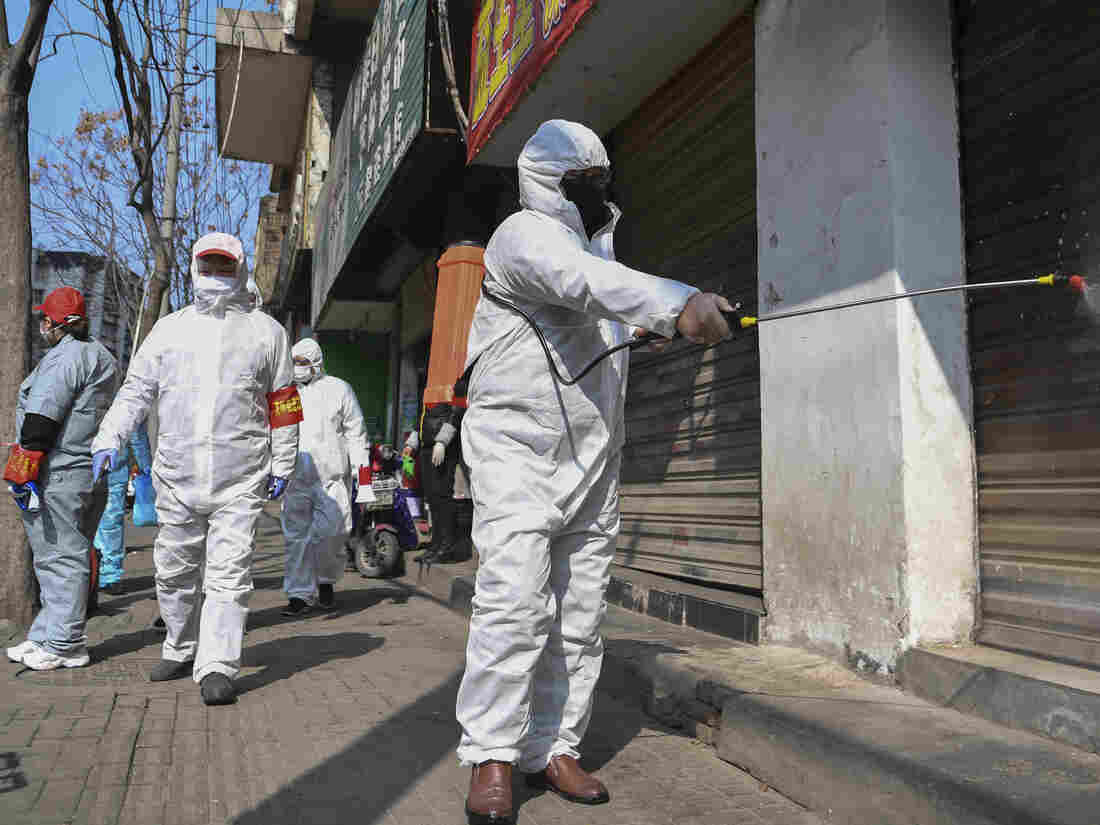 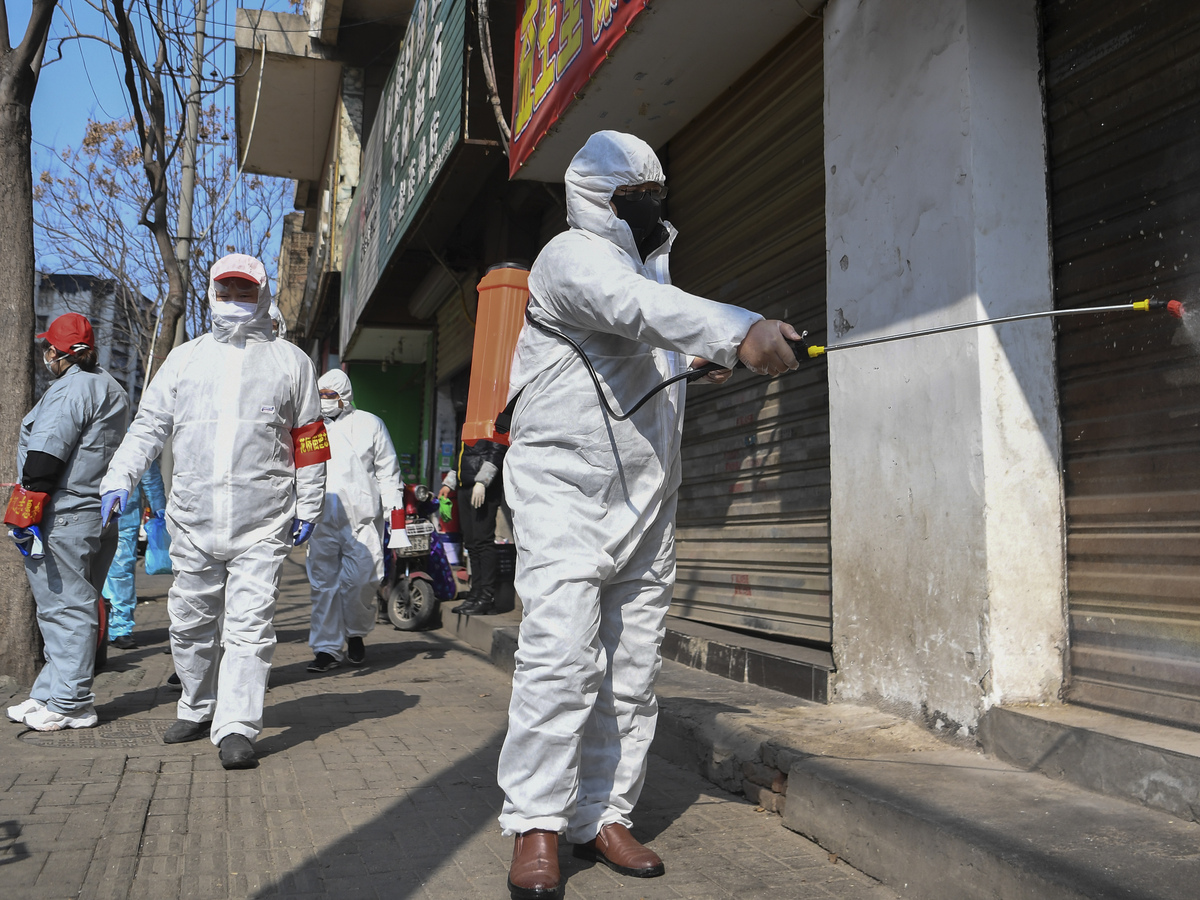 The head of the World Health Organization is warning that a few cases of the novel coronavirus that have been spread by people who never traveled to China could be "the tip of the iceberg," as officials reported on Tuesday local time that the country's death toll had passed 1,000 from the new virus.

Meanwhile, Chinese authorities lashed out at Western media reports that Beijing was not fully cooperating with international health experts.

In a tweet on Sunday from Geneva, WHO Director-General Tedros Adhanom Ghebreyesus said the "spread outside #China appears to be slow, but could accelerate."

"The detection of a small number of cases may indicate more widespread transmission in other countries; in short, we may only be seeing the tip of the iceberg," he wrote, adding, "Containment remains our objective, but all countries must use the window of opportunity created by the containment strategy to prepare for the virus' possible arrival."

There’ve been some concerning instances of onward #2019nCoV spread from people with no travel history to . The detection of a small number of cases may indicate more widespread transmission in other countries; in short, we may only be seeing the tip of the iceberg.

Over the weekend, the number of deaths from 2019-nCoV, as the virus is officially known, surpassed those killed by severe acute respiratory syndrome, or SARS, during the 2003 outbreak that originated in southern China. Like SARS, 2019-nCoV is another in a family of coronaviruses that typically cause mild to moderate pneumonia, which can nonetheless be deadly, especially in patients with weak or compromised immune systems.

Early Tuesday, China said there had been another 108 deaths, bringing the total number of deaths in China to 1,016, with 42,638 confirmed cases. There have been more than 300 other confirmed cases worldwide and one additional confirmed death outside of China.

Although so far the mortality rate for 2019-nCoV has proven far lower than for SARS — about 2% compared to around 10% — the new virus appears to have spread more rapidly than its earlier cousin. SARS killed 774 people during an outbreak that began in late 2002 and reached its peak in 2003.

The novel coronavirus was first identified in December in the central city of Wuhan and then spread rapidly throughout China. Since then, cases have been found across Asia, Europe, the Middle East and the U.S.

That has put Beijing under tremendous pressure to contain the epidemic, and editorials published in the Global Times newspaper, run by the Chinese Communist Party, suggest that Chinese officials may be feeling chastened about perceptions of how they've handled the global health crisis.

In one editorial headlined "Is sympathy too much to ask from the Western media?" author Wang Wenwen writes: "Reading through some Western media reports on China's fight against the outbreak, I could not find many encouraging and inspiring ones. Instead, I discovered discrimination and gloating."

Wang wrote: "Many of the reports made me feel as if every Chinese is living in despair and does not want to follow government measures, which have been referred to as human rights violations. However, this is not the case. Fear or anxiety of people is not from the government measures, but from the outbreak itself, in contrast with several media reports."

The author pointed specifically to a New York Times report on Friday that Chinese officials had repeatedly rebuffed offers of help from the U.S. Centers for Disease Control and Prevention and WHO. The Times piece was also in the crosshairs of a separate op-ed.

"China has in fact been maintaining close collaboration with WHO right after it realizes the severity of the epidemic, including sharing the genetic sequence of the new virus and keeping WHO updated on the epidemic," the editorial in the Global Times read.

Outside of China, the rest of Asia has been hit hardest by the virus. Although the number of confirmed cases remains relatively small, the economic and political backlash has been outsized.

In Japan, where a large proportion of foreign tourists come from China, dozens of coronavirus cases have been identified on a cruise ship carrying some 3,700 people who have been quarantined aboard for days.

The Diamond Princess arrived at Yokohama, Japan, after one of its passengers disembarked at Hong Kong on Jan. 25 to visit a local hospital and was subsequently diagnosed with the virus.

Another cruise ship, Holland America's MS Westerdam, is now on its way to Thailand after Japan denied entry to several of its ports, including Yokohama. The ship, which left Hong Kong on Feb. 1, had been without a port for several days, as authorities in Taiwan, the Philippines and the U.S. territory of Guam also said they would not allow the Westerdam to visit their ports.

The Westerdam will end its ill-fated cruise by disembarking its passengers in Bangkok on Feb. 13, Holland America announced on Monday. According to Vesselfinder, it was off Vietnam's southern coast on Monday.

In response to the epidemic, Tokyo has enacted restrictive measures that ban the entry of Chinese nationals holding passports issued by Hubei — the Chinese province that is the epicenter of the epidemic — and all foreigners who had visited the province within the past two weeks, regardless of whether they are showing symptoms of infection, Reuters reports.

"The new coronavirus is having a major impact on tourism, the economy and our society as a whole," Japan's Prime Minister Shinzo Abe said Saturday. "The government will do its utmost to address the impact."

In London, Britain's health ministry on Monday declared the new coronavirus "a serious and imminent public threat to health," a step that gives the government additional powers to fight the virus. The U.K. has four confirmed cases.