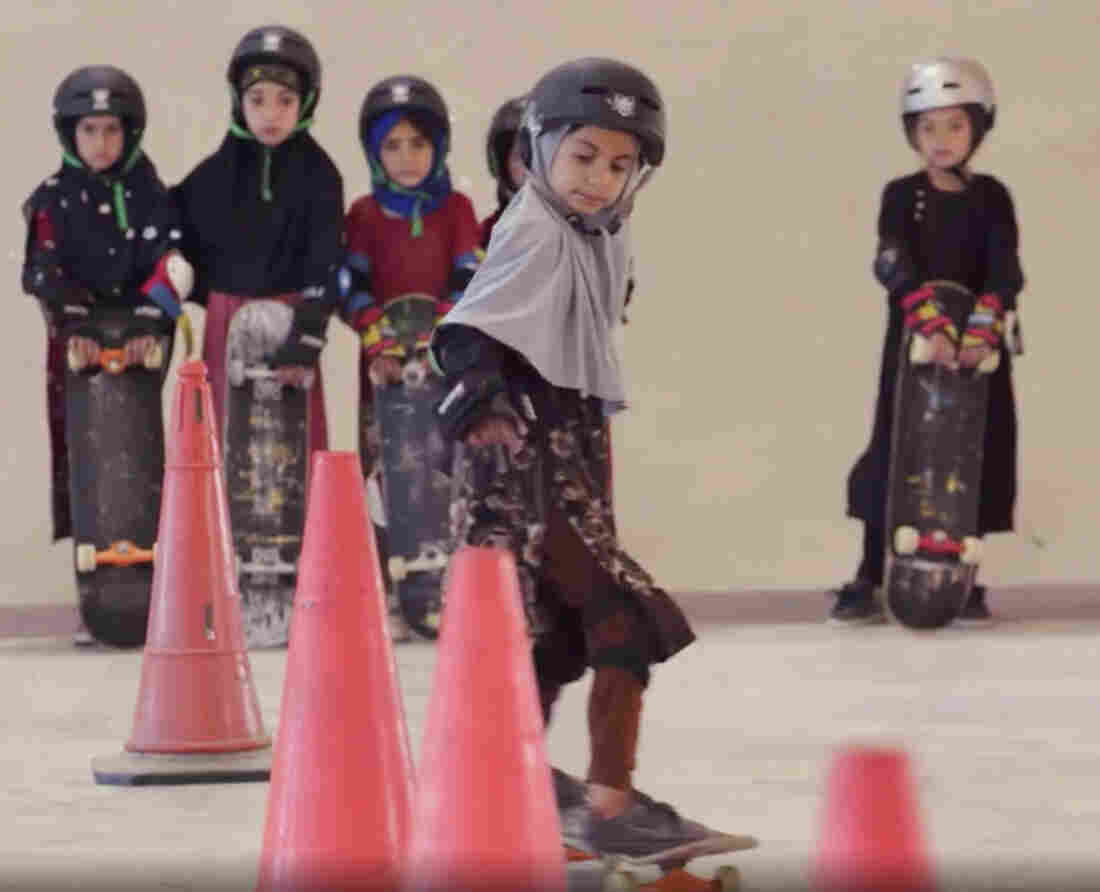 Students wearing headscarves and helmets learn to navigate traffic cones in a scene from the Oscar-winning documentary, "Learning to Skateboard in a Warzone (If You're a Girl)." A&E IndieFilms/ Screenshot by NPR hide caption 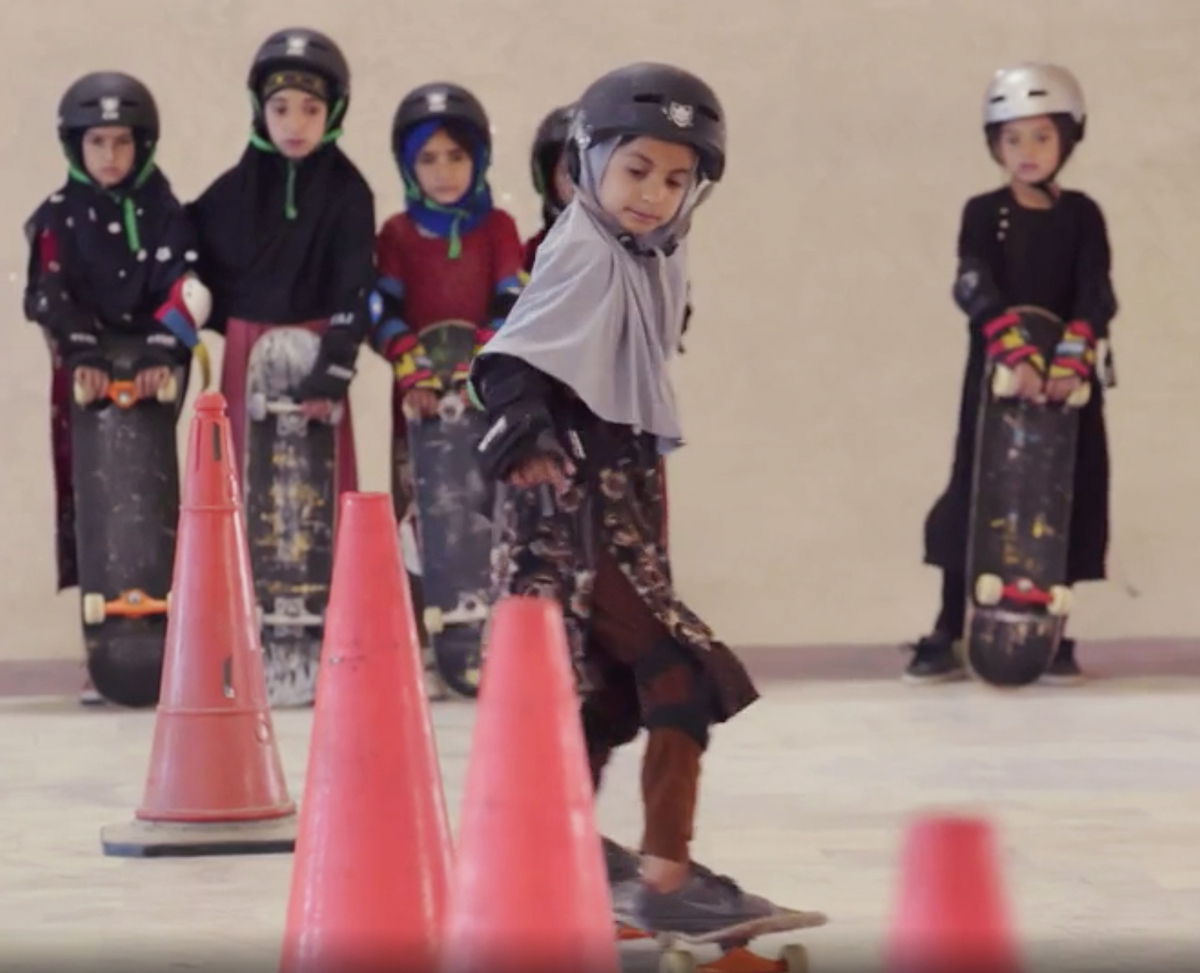 Students wearing headscarves and helmets learn to navigate traffic cones in a scene from the Oscar-winning documentary, "Learning to Skateboard in a Warzone (If You're a Girl)."

The girls clutch their skateboards, biting their lips and fiddling with the wheels. They're learning how to make tight little turns around traffic cones, and the tension is palpable. It could be summer camp in anywhere U.S.A., but these girls are wearing headscarves under large helmets, they're dressed in long, modest clothes and the skateboarding arena is tucked behind high walls in the Afghan capital Kabul – for the girls' own safety.

The girls are the subject of a tender documentary, Learning to Skateboard in a Warzone (If You're a Girl), and it just won an Oscar for best documentary short subject at the 92nd annual Academy Awards.

"This movie is my love letter to the brave girls of that country," said the documentary's director, Carol Dysinger, as she accepted the award alongside producer Elena Andreicheva. "They teach girls courage, to raise your hand, to say I am here, I have something to say and I'm going to take that ramp, don't try to stop me."

It is a rare win for a film involving Afghans after years of nominations, including for last year's "The Breadwinner," an animated film produced by Angelina Jolie, which tells the story of a little girl who disguises herself as a boy so she can support her family under Taliban rule.

Learning to Skateboard is a heartwarming – and heartbreaking – look into the lives of girls in a country considered to be one of the worst places in the world to be born female. It revolves around the school, which has its own skate park and is run by a charity called Skateistan (skateboarding + stan, get it?). The 398 students, ages 5 to 17, are both male and female; 41% of them are girls. Boys and girls attend classes on separate days.

The students are taught to believe in themselves through education — and learning how to skate.

Learning To Skate In A War Zone (If You're A Girl) Trailer from Grain Media on Vimeo.

The documentary focuses on the female students, visually underscoring the world they live in by taking viewers down a battered street in Kabul. Men lean in and stare, but there's not a woman to be seen. The documentary than enters the inner world of the Skateistan school. The first lesson we see them attend is literally, on courage. The girls are encouraged to define the word. Reading books is courage, one girl pipes up. Going to school, says another.

The girls in the film attend a "Back-to-School" program with 3 hours of daily educational instruction, aiming to get kids who aren't in formal education ready to enroll in public school, along with regular skate sessions.

The girls sit before a camera and talk about their lives. One says she sold gum on the streets before she was scouted to join the Skateistan school — there's a community educator who encourages girls and their families to participate. Another student says she sold tea.

In a city of car bombings, kidnappings and violence against women unprotected by powerful men, these little girls are already unlikely survivors. To see them wobbling on skateboards is wrenching: You want them to figure this out, how to stand up, how to glide.

In one hold-your-breath moment, their teacher, an Afghan woman with rolled-up sleeves, gets four girls to lie down on the ground. She speeds down a ramp and flies through the air over them. But the limits of the girls' freedom through skateboarding is clear. One tells the camera, "I don't want to grow up, so I can skate forever."

The charity, Skateistan, began when an Australian skater, Oliver Percovich joined his girlfriend at the time, who was working in Kabul in 2008. He began teaching street kids how to skateboard, and the project developed from there, says the group's communications manager, Jessica Faulkner.

Now Skateistan, which is supported by donations, has four skate schools, two in Afghanistan, one in South Africa and another in Cambodia. "What we try to do is give children a place where they feel safe, where they can express themselves and explore their own interests," says Faulkner. "And we couple that with the skateboarding, which helps them to build their resilience, their kind of goal setting, their determination and have a whole lot of fun at the same time."

In 2013, Skateistan won the UNICEF Education through Sport award.

Faulkner says the film emerged from a long connection between the charity and the production company, Grain Media. The documentary crew was all-female to ensure the schoolgirls — and their parents — were comfortable. The film does not show the location of the school, and Skateistan declined to allow media to visit the school, citing security concerns.

The Oscar is a welcome surprise. Last week, the documentary won a BAFTA – a British Academy Film Award --"and then we sort of started having conversations like – this actually could win an Oscar," says Faulkner. She says the girls at the school had not heard of the Oscars before, but "they're very excited that a lot of people are seeing [the film] and seeing their lives."

As for the teachers and other Skateistan staff: "We are all just completely delighted," Faulkner says. "It's amazing to be able to tell the story of our students in Afghanistan in such a powerful and beautiful way. And obviously it raises awareness about what we do. So that's just as fantastic."