Accessibility links
Quarantined By Coronavirus, Cruise Ship Passengers Make 'Life-Long Friends' : Goats and Soda The postings on Facebook, email and WhatsApp are mainly "just words of encouragement and a friendly ear." But they also share food reviews and news. 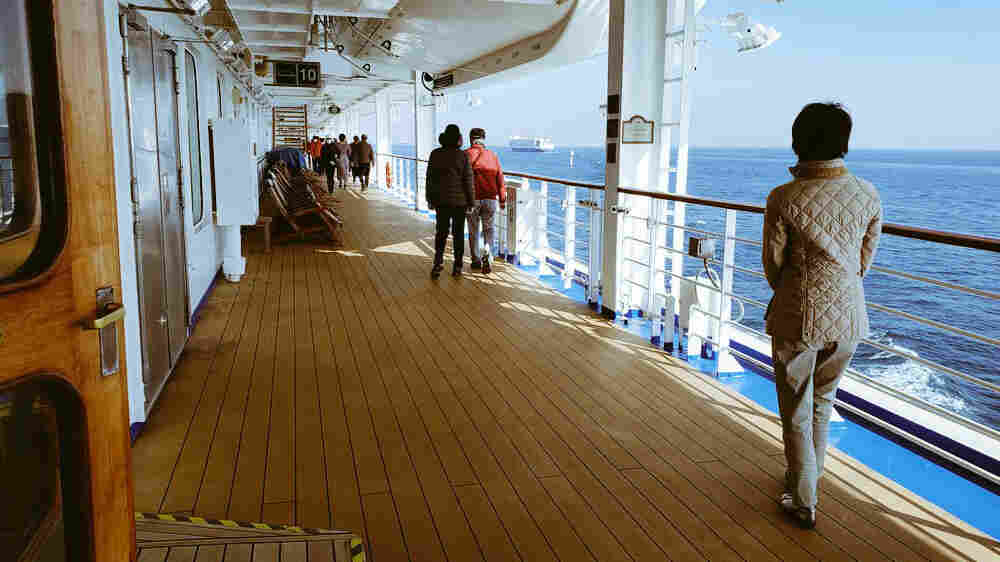 Many passengers aboard the Diamond Princess cruise ship have created online groups to share news and encourage each other. And in some cases, they've formed lasting friendships. @daxa_tw/via Twitter hide caption 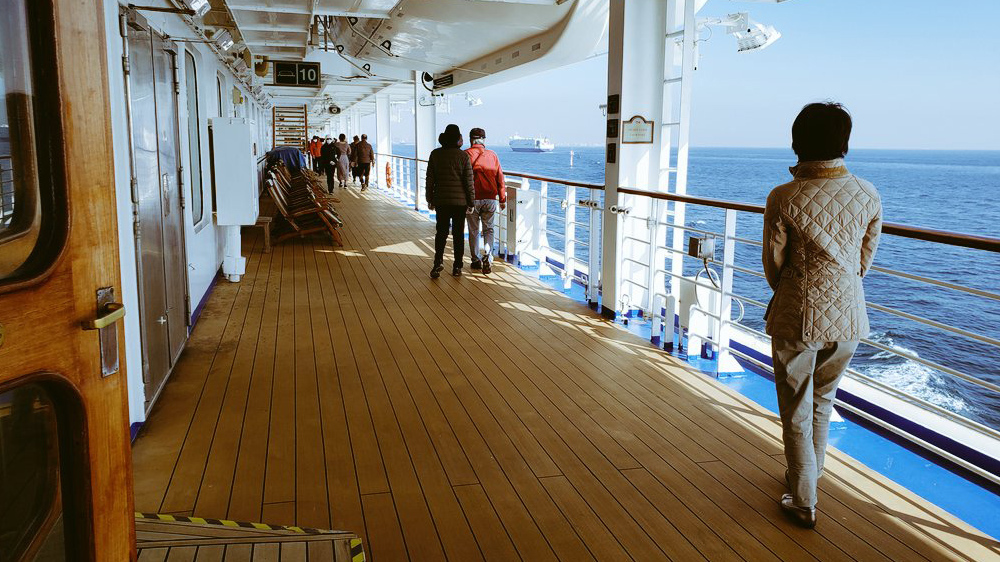 Many passengers aboard the Diamond Princess cruise ship have created online groups to share news and encourage each other. And in some cases, they've formed lasting friendships.

The quarantine of the Diamond Princess cruise ship has spawned several online communities, with passengers forming groups on WhatsApp and Facebook to break through the isolation and share information. While they exchange information, they also focus on keeping each other's spirits up.

"We check on each other to see how we are each doing daily," passenger Aun Na Tan of Australia said in a message to NPR.

The postings on Facebook and messages sent via email are mainly "just words of encouragement and a friendly ear" among people whose lives have been sidetracked by a global health emergency, Tan says.

The passengers are only halfway through the 14-day quarantine, which is slated to end on Feb. 19. But some of the ties they've formed could last for years.

"The WhatsApp group of friends that we have made on the ship are now life-long friends and definitely plan on keeping in touch" with them, passenger Kent Frasure of Oregon told NPR via text message.

Nearly 100 passengers have joined a special Facebook group for those aboard the ship. The private group, which was begun by two Australian passengers, has the stated goal of creating a place to " 'let off steam' and cheer each other up."

But some passengers are limiting their time on Facebook, partly because many of the public discussions about the cruise ship that they've seen there have been negative. 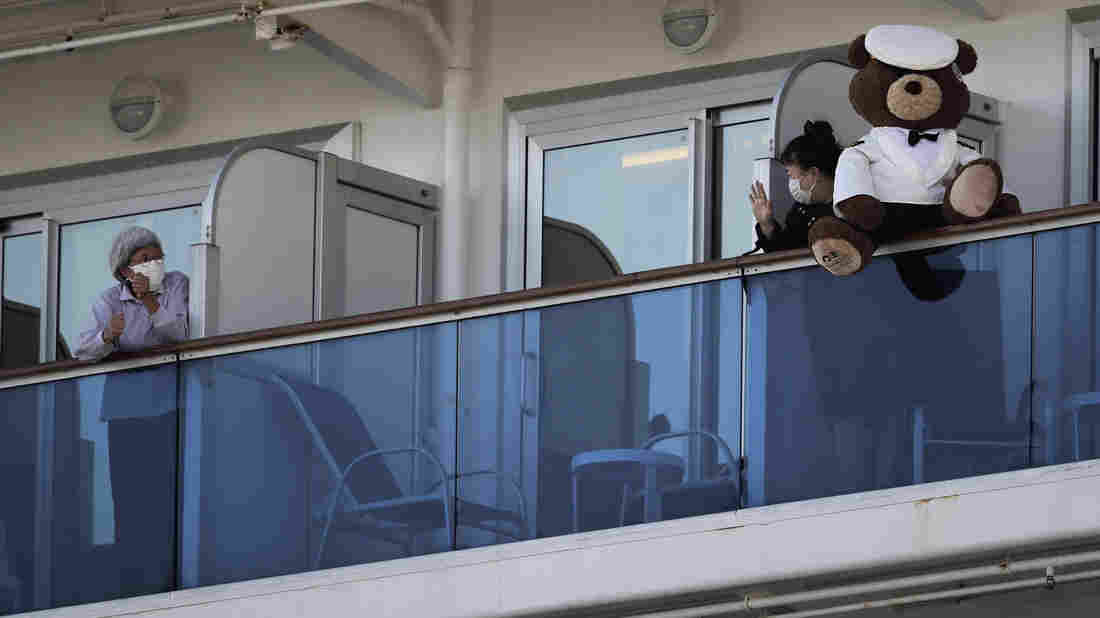 A woman with a teddy bear waves to another passenger as they undergo quarantine on the Diamond Princess cruise ship in Yokohama, Japan. Many passengers are using chat groups and social media to share information with each other. Jae C. Hong/AP hide caption 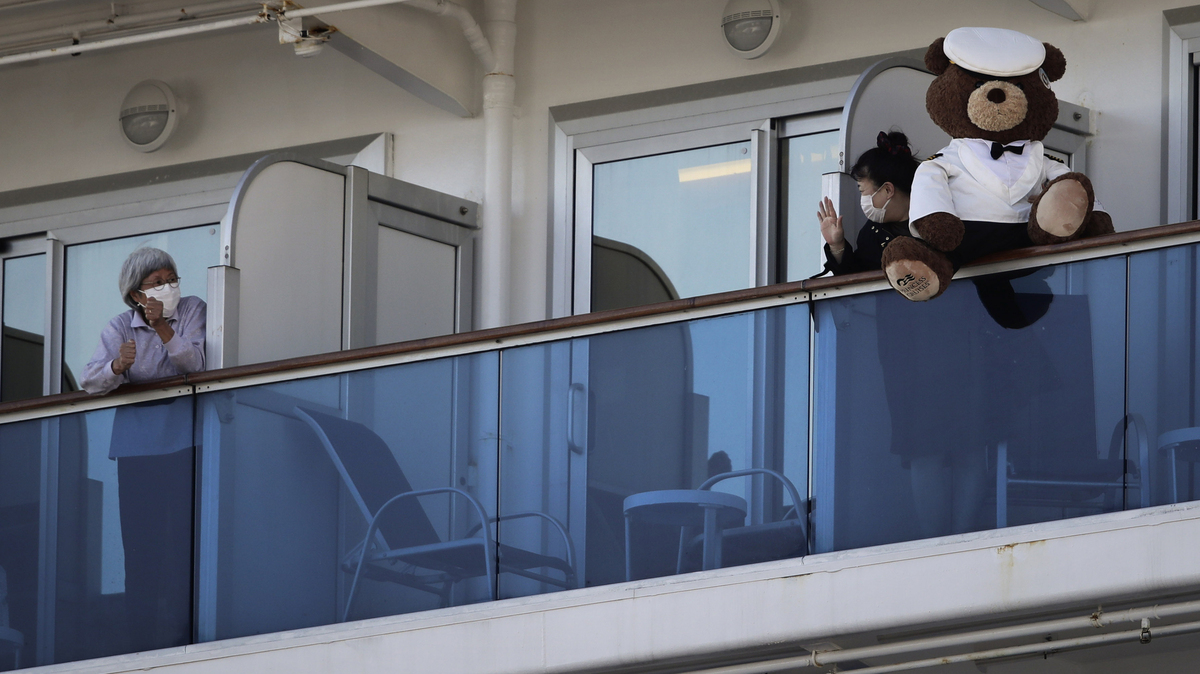 A woman with a teddy bear waves to another passenger as they undergo quarantine on the Diamond Princess cruise ship in Yokohama, Japan. Many passengers are using chat groups and social media to share information with each other.

"The platforms have helped tremendously," Frasure said. "The WhatsApp group is filled with friends and is a very positive and supportive place."

Passengers who are lucky enough to have a balcony often simply chat while getting fresh air, Frasure added.

With many of its guests trapped in their rooms except for brief turns on the deck, Princess Cruises has widened Internet access and increased entertainment offerings on the ship's TVs. The Diamond Princess staff is also making videos to distract the passengers and help them exercise, with segments that range from quizzes and napkin folding to a dance and stretching class led by the onboard fitness instructor.

One of the most popular in-house TV offerings has been the Magic of the Day show put on by magician Sunny Chen, a native of Taiwan who is among those quarantined.

#day8 #coronavirus #CoronavirusOutbreak #quarantined on #DiamondPrincess thanks @sunnychenmagic for putting effort to show us amazing magic, my son loves him, when he saw his tired face, he wants to make him smile. #HanginthereDiamondPrincess pic.twitter.com/XMFeJ9nkwI

"Thanks @sunnychenmagic for putting effort to show us amazing magic, my son loves him," passenger Yardley Wong wrote on Wednesday. She later added, "Sunny is soo good. My son copied his card magic all night long."

Chen is posting video updates to his own Facebook page. And he says the roughly 20 Taiwanese who are on board have formed their own online group, which he describes as a place for them to support each other.

"Received a lot of encouragement and support!!" Chen said in one recent post, speaking in Mandarin.

"My original intention was to bring joy to all viewers," Chen said of his career as a magician. "Now as a victim of the virus crisis, I am really moved as I feel the strength you are delivering to me. Passengers on board are also cheering each other on! We have to help each other to get through this challenge together!"

The passengers share an oddly disjointed existence: While more than 2,600 of them are on the same ship, they're largely isolated from each other, to keep the coronavirus from spreading. So to share information and answer questions, they've formed their own groups online.

Faced with two weeks of monotony, several of those on board have also sparked lively discussions by sharing videos of shipboard activities and photos of their meals, drawing comments from both their fellow passengers and the public.

American passenger Matthew Smith has been tweeting out images of his meals — with mostly enthusiastic mini-reviews. Hundreds of people have responded to those posts, including some of his fellow passengers.

Yes, 66 new cases have been id'ed on board, and I do feel bad for those people, but because life goes on . . . here was lunch: tater salad, three bean something, and pork adobo. And Coke! No complaints here. pic.twitter.com/YgGdmwLkKy

"Did you eat all of it? I'm cutting way back and trying to avoid dessert, but they went and sent an apple strudel to my son and I might have to steal it," another passenger replied to Smith, after he posted an image of his lunch. That passenger later added, "the apple strudel was OK. The coconut cream cake was much better."

Smith has also won fans for his successful attempts to get at least two cups of coffee a day — and for his positive attitude in the face of a vacation gone awry.

"You might have to drag me off the ship when the quarantine ends," he wrote last week, praising the food and saying he'd much rather be on the ship than in a hospital.

In addition to chat groups and messages, the quarantined ship also has its own official hashtag: The Princess cruise line is encouraging passengers to use #HangInThereDiamondPrincess to share their experiences.

"Kudos to the magnif[ic]ent pastry chefs on board the Diamond Princess," American author Gay Courter wrote in one recent tweet, adding, "Delicious desserts twice a day chases the quarantine blues away."

Some passengers are also using the hashtag to highlight their concern for the crew members, who are working through the quarantine, supplying food and clean linens to passengers all over the ship while they also try to avoid being infected by the virus.

A different note on my door tonight. Today I was reminded how tirelessly the crew are working on this ship. They are all working so hard, long hours and dealing with perturbed guests!! Thank you to all the crew!! #diamondprincess #Quarantine #gratitude pic.twitter.com/SpqysBS2ai

"Most are working longer hours now that's they are in different roles," a passenger named Shannon wrote. "They are also living in cramped quarters and are most susceptible to the virus. Please pray for them."

In a sign of the crew's responsiveness, Shannon posted a tweet on Monday in which she wished for a bottle of Sriracha hot sauce. On Wednesday, she celebrated the arrival of the iconic rooster-adorned bottle by posting a photo and the caption, "Sriracha prayers have been answered!"

Last night’s dinner. Today is now day 7, and y’all, I just need some sriracha up in here. pic.twitter.com/jZqwp1GyPW

The Diamond Princess quarantine is slated to end on Feb. 19. But with dozens of new cases emerging since the initial screening was completed, health officials say anyone who was in close contact with a coronavirus patient must go through an additional quarantine.

Japanese officials said the number of people who had the deadly coronavirus had risen to a total of 218 by Thursday morning local time, as reported by The Associated Press. The ship has the largest cluster of cases in the world outside mainland China. In addition to those cases, a quarantine officer who had been aboard the Diamond Princess was also diagnosed with the respiratory virus. Anyone who gets sick is taken off the ship and transported to nearby hospitals — a process that many passengers have also documented online.

While the ship's passengers are using phones and other gadgets to talk with each other, they're also getting encouragement from the outside world.

In one unique example, a resident of Wuhan, China — the city that has been identified as the epicenter of the outbreak — wrote to apologize to a Japanese man who is a passenger on the ship and who has been posting updates on Twitter.

"Thank you for sharing pics and information to us and sorry for influencing you in a negative way (I am a student from Wuhan China)," Jing Liu said via Twitter, adding, "Hopefully you will be free and go back home earlier. Best wishes."

"You do not need to feel bad," replied @daxa_tw, who told NPR that he prefers not to use his real name online. In his reply to Liu, he added a smiley face.

You do not need to feel bad. Thank you😃