Accessibility links
Bats In China Carry 400+ Coronaviruses With The Potential To Spill Over Into Humans : Goats and Soda The coronavirus outbreak in China seems like an unusual event. But scientists have found that similar viruses have been quietly jumping from bats into humans for years. 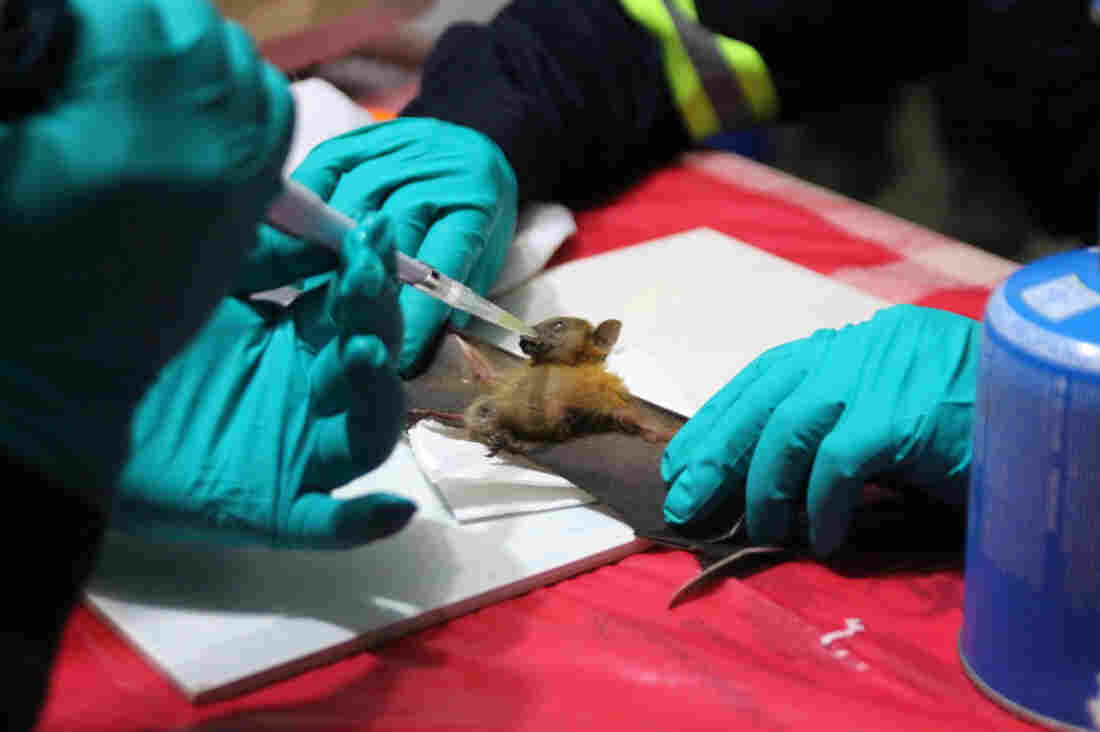 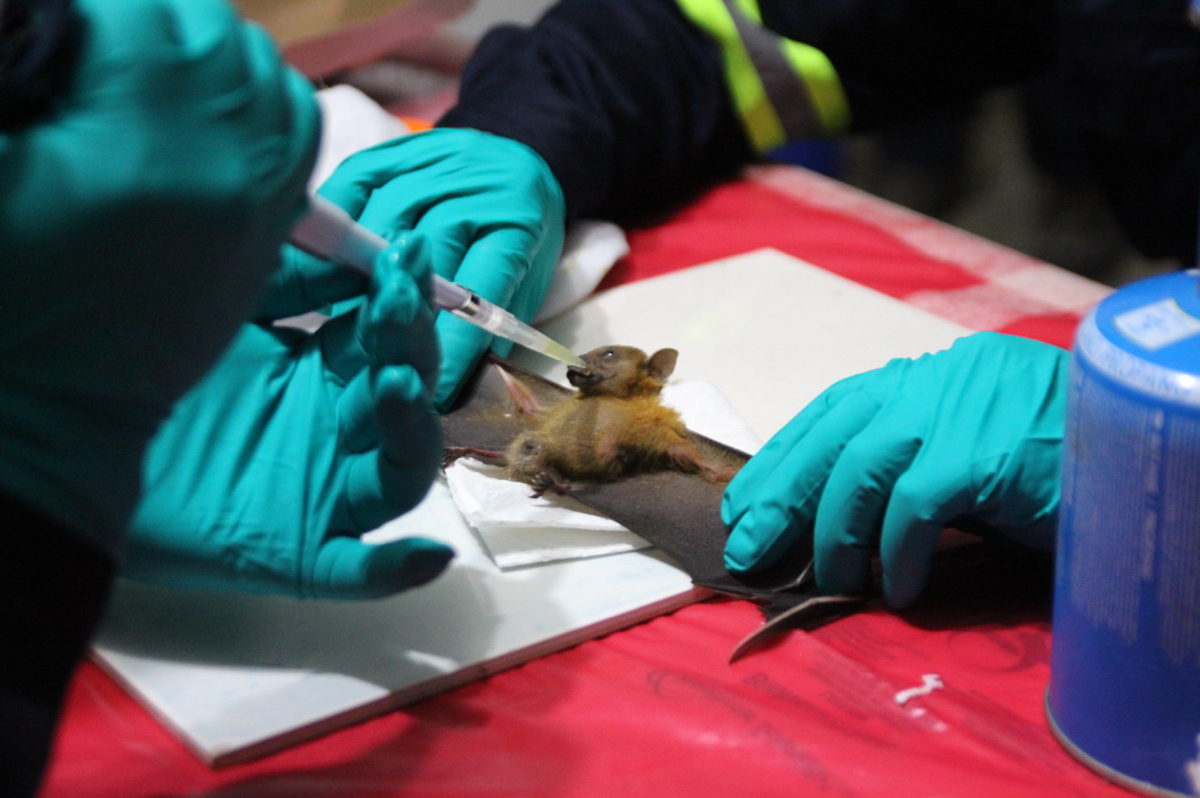 Researchers give fruit juice to a short-nosed fruit bat after sampling its saliva, blood, urine and poop. They'll look for new viruses in the bat's bodily fluids.

Olival, who is with the nonprofit research group EcoHealth Alliance, was there to trap bats and collect samples of their body fluids. He and his collaborators would then test the samples for viruses. Bats are known for carrying some dangerous ones, particularly viruses that have the potential to kick off global outbreaks through what's called "spillovers" — instances of an animal virus jumping into a human.

So the researchers were on a hunt for the next big threat.

The results of their work put the current coronavirus outbreak in China in a wholly new light. Scientists say it was caused by a spillover event. And the findings from the sample collection project suggest these kinds of spillovers have actually been quietly taking place in China for years.

The evidence comes from hours of painstaking sample collection sessions, like the one NPR witnessed in Borneo:

Olival is at the edge of a rainforest, sitting in a makeshift outdoor lab. There are plastic chairs. On a folding table, he places a small female bat.

"So we're getting the oral swab in the back of the throat," Olival explains. "And I'm just holding her head between my two fingers."

He smiles. "Oooh, good one! There's definitely some sample on that swab."

The bat gives a sudden squeak.

"That was a reaction to a rectal swab," says Olival wryly.

A few more swabs and it's all done.

"Now she gets her special treat," says Olival. "A little bit of mango juice as a reward."

At that time, Olival and his colleagues were also in the process of collecting samples from thousands of bats in China.

Fast-forward to the present day. Olival says what they found is alarming: "We found evidence for, in total, from all the sampling we did in China, about 400 new strains of coronaviruses."

That means 400 potential candidates to spark another outbreak. After all, a coronavirus caused a massive outbreak in China back in 2002 — severe acute respiratory syndrome, or SARS. And this current outbreak is from a SARS-related coronavirus.

A direct path to humans

It gets worse: Scientists had thought spillovers were rare — that bat coronaviruses weren't generally capable of infecting humans, so it took complicated steps. Step one: A bat coronavirus would have to infect some animal species that had closer contact with people than bats do. Step two: While in that other animal's body, the virus would need to pick up new genetic code.

But the sampling project found that those steps are not needed, says Olival.

"What we showed was that SARS-related viruses in these bat populations have the potential to go directly into human cells and do not need that extra mutational step [of] infecting another host."

In other words, the path to sparking new outbreaks is potentially much more direct.

For example, one of the coronaviruses that the researchers found was a very close genetic match for the SARS virus. So they put it in a petri dish with human cells. The virus succeeded in infecting the cells. 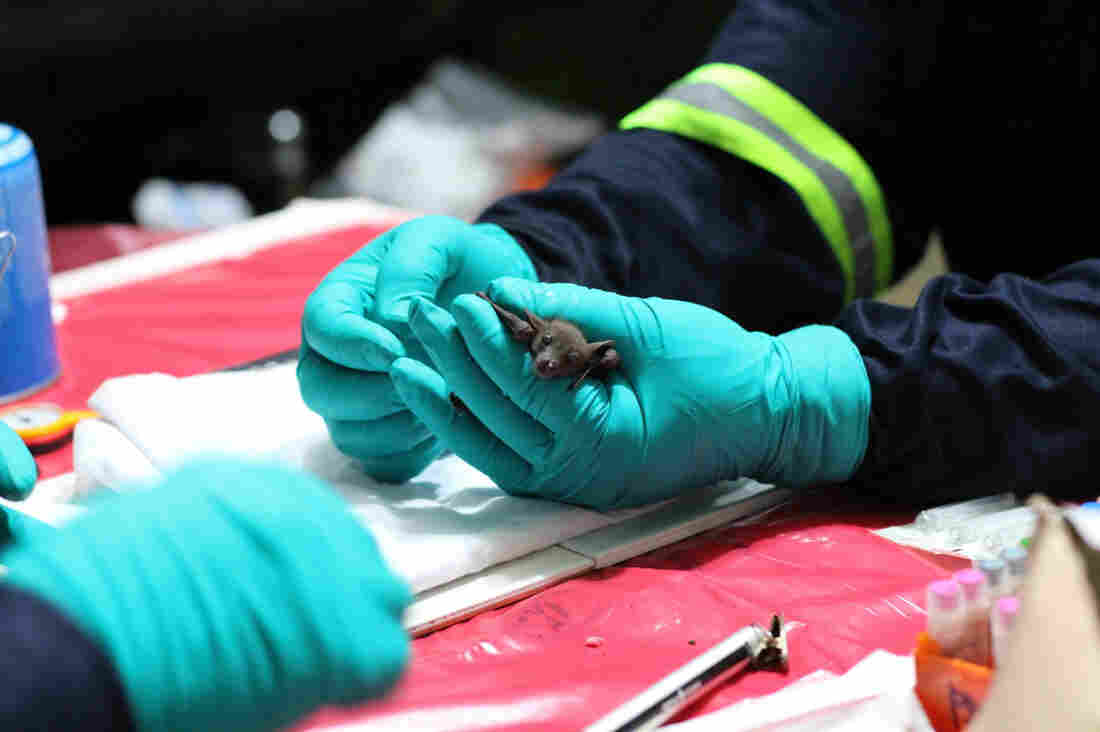 After the sampling is over, the bat will be released back into the wild. Kevin Olival hide caption 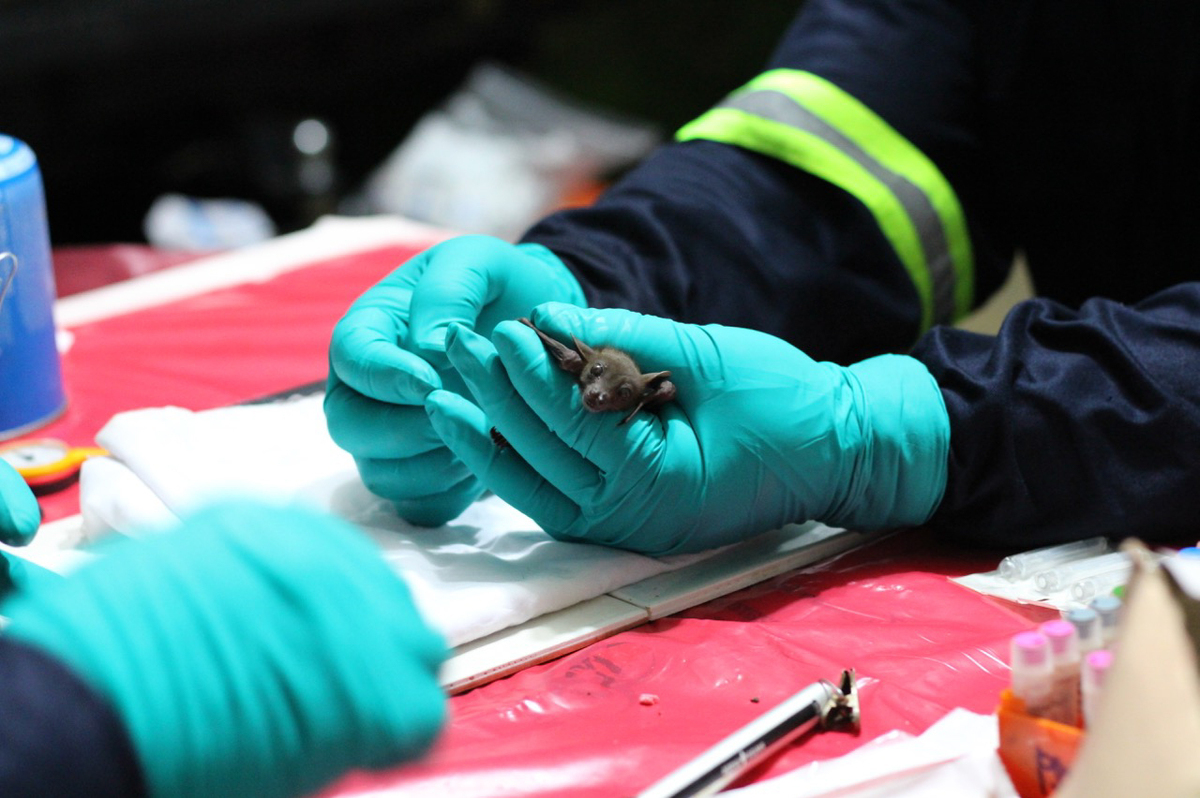 After the sampling is over, the bat will be released back into the wild.

Olival says the fact that a bat coronavirus had at least this biological ability in a lab setting raised an obvious next question: Is there evidence that these viruses are infecting people in the real world?

So the researchers started taking blood samples from villagers in China who lived near some of the bat caves they'd been studying.

Hongying Li is an ecologist with EcoHealth Alliance. She says there were any number of ways these people seemed at risk of inadvertently coming into contact with bat saliva, urine or poop.

"In some places you could find bats roosting in people's homes," she says. "A lot of people reported, 'Once a bat flew into my house and I killed it' or 'Bats ate the fruits in my backyard.' "

And people even visited the bat caves, says Li. The caves were a particularly popular hangout in the summer, when they provided respite from the heat.

"When we went to the caves for sampling, we'd usually see people's beer bottles and water bottles," says Li.

She and her colleagues checked the villagers' blood for signs of recent infections with bat coronaviruses. The team did this again with people in some other rural areas. Each time, says Li, "we found coronaviruses that had already spilled over into the human population."

These were multiple mini-outbreaks that had gone undetected.

Olival says this discovery was a huge red flag: "The signal is there that these SARS-related viruses were jumping into people even if they weren't causing any noticeable disease."

Indeed, people might have even had symptoms, but health authorities simply never picked up on it.

Which brings us to this current coronavirus outbreak. As soon as it started, EcoHealth Alliance's longtime collaborators in China (principally researchers at the Wuhan Institute of Virology and the Wuhan Jinyintan Hospital) compared the new virus with the bat samples they'd collected. They found an extremely close match.

"A viral taxonomist would probably call that the same virus species," says Olival.

That suggests this current outbreak — which has infected tens of thousands of people — could have come directly from bats, says Olival.

And, he adds, the larger takeaway is clear: "These bat SARS-related coronaviruses are actively spilling over in the human population."

Not all of them will spark deadly pandemics. But the more frequent these spillovers, the greater the chances.