Accessibility links
To Stop The Spread Of Coronavirus, China Takes Drastic Steps : Goats and Soda No one can say whether the tough measures will help defeat coronavirus, But they've definitely changed daily life — and raised concerns. 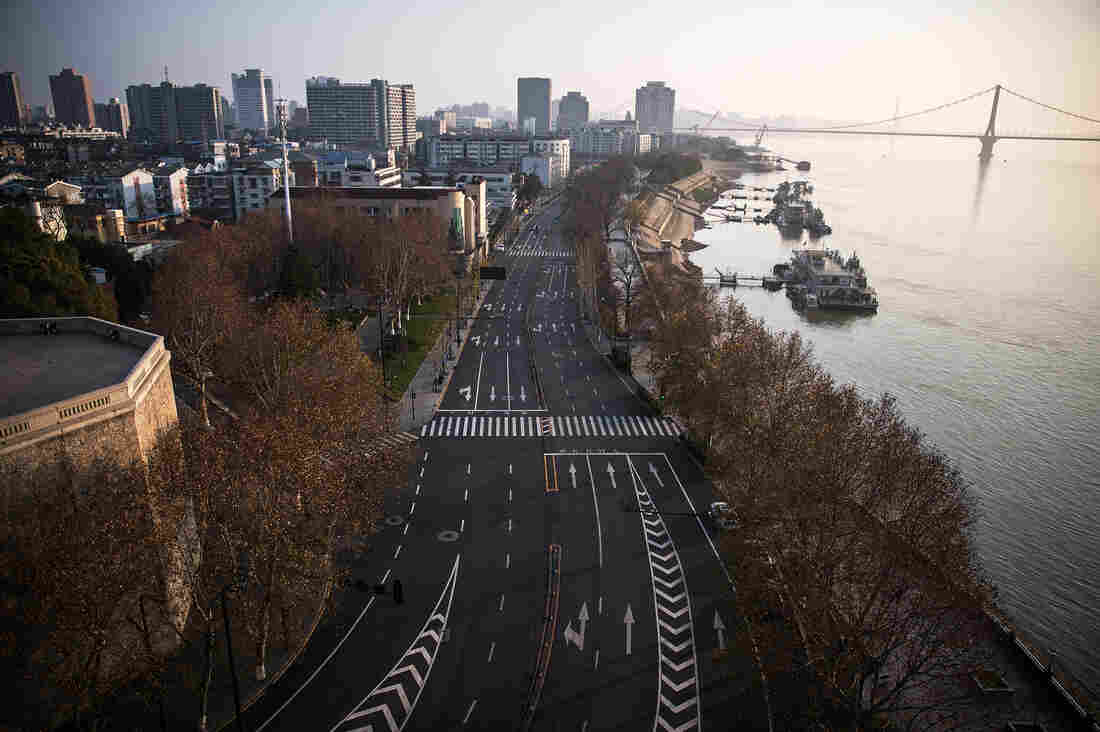 Roads are empty in Wuhan, China, the epicenter of the coronavirus outbreak, where a strict lockdown is in effect. Stringer for NPR hide caption 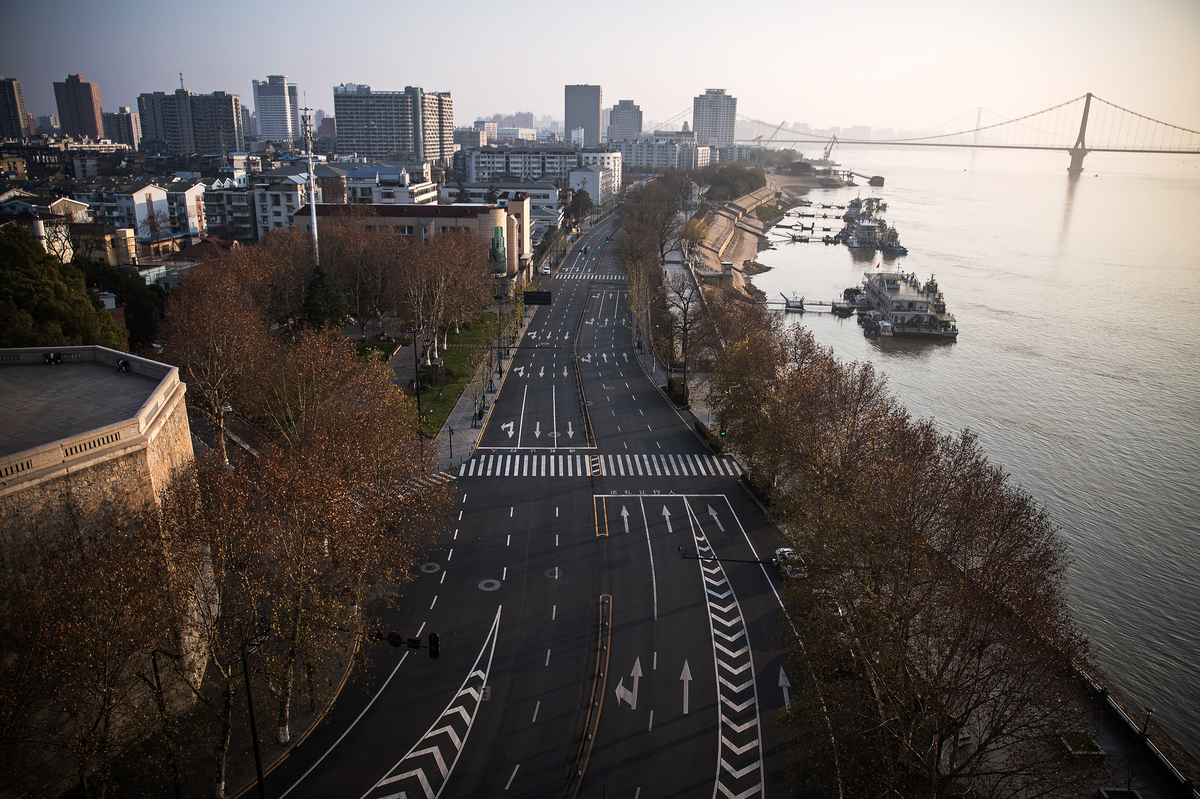 Roads are empty in Wuhan, China, the epicenter of the coronavirus outbreak, where a strict lockdown is in effect.

China has put more than half a billion people under partial or total lockdown in what it is calling an all-out "people's war" against the spread of the new coronavirus. It's equivalent to restricting the movement of the entire population of North America.

To enforce sweeping quarantine measures over vast areas of the country, China has turned to a medley of low- and high-tech measures. Citizens are also financially rewarded for reporting those who fail to follow quarantine orders. These methods reflect a decades-long history of social control now being mobilized on an unprecedented scale.

Researchers say it is too early to determine what effect these measures have had in containing the outbreak. A lack of accurate screening measures and a delayed response to the virus likely have blunted the efficacy of quarantines.

Here are some of the ways that local and national authorities are keeping their citizens in check.

Lockdown measures have been most severe in Hubei province, the epicenter of the coronavirus outbreak with nearly three-fourths of the 75,000-plus confirmed cases (as of Thursday) in China.

In the weeks since Jan. 23, when Wuhan, Hubei's capital city, prohibited anyone from leaving, government officials across the province have gradually ramped up efforts to keep residents inside their houses. Apartment compounds allowed people to go in and out through one gate, each household could only send one person out once every three days to purchase groceries, and everyone's temperature is checked upon entrance.

But as the number of coronavirus cases continues to climb, Hubei officials have implemented more drastic policies on nearly 60 million residents.

On Sunday, the Hubei government ordered community officials to began enforcing "the strictest, around-the-clock, closed management" of all residential complexes, banning the private use of cars, forbidding residents from leaving their apartments without permission and requiring purchasers of cold medicine to disclose their temperature, address and identification number at the pharmacy. To further cut down on people's needs to leave their houses, many community officials are now buying and delivering groceries and medication for the residents in their jurisdiction.

An army of monitors

The majority of China, which faces a lower density of coronavirus cases, has far less extreme controls.

Many cities have utilized a monitoring scheme in which large neighborhoods are broken down into smaller gridlike units responsible for enforcing regulations. The method traces back to the way social order was maintained in Imperial China.

Community officials — a mix of paid employees and volunteers, mostly retirees — tightly monitor activity such as going out or visiting other residential complexes. They can call the local police for backup if anyone refuses to cooperate with temperature checks or quarantine orders.

These officials, known as grid workers, are supposed to screen each person's temperature as they enter the complex — echoing the rules in Wuhan — and note whether they've recently left the city. Some neighborhoods have even distributed permits to residents so that only those who live there can get in.

But in practice, implementation of these control measures can be lax given that travel records largely rely on self-reporting and that not all workers are equally zealous.

Just one district in Beijing recruited 2,000 Communist party members to help out with grid work. They now patrol the gates of residential compounds, registering anyone with a recent travel history and enforcing a 14-day self-quarantine.

In addition to enlisting grid workers, local officials are rewarding anyone who reports neighbors and friends for attending social gatherings or refusing to quarantine themselves after traveling. A person who disobeys these rules may be subjected to detention and fines for disrupting social order, a charge punishable under China's administrative law.

Nearly all cities have prohibited group activities such as dinner parties to prevent mass infection. In one Fujian village, a man returning home from Wuhan had attended several Lunar New Year celebrations before being diagnosed with COVID-19. As a result over 4,000 people who were also at these events were forced into quarantine.

The steel manufacturing hub of Shijiazhuang says the local government will give citizens up to RMB2,000, or $290, for reporting anyone traveling from or returning from a visit to Wuhan, where the outbreak began. Another neighborhood in the southern city of Nanchang, near the border of the virus epicenter, will shell out RMB500 ($72) for those who turn in people running a fever.

A district of the Sichuan city of Deyang is giving out a sliding scale of rewards up to RMB1,000 ($143) for tips on an even wider variety of misbehavior, including people who trade wild animals, jack up prices on medical supplies and host family members who've traveled from outside the city.

Coastal Zhejiang province is cutting down on the amount of time people spend outdoors as a way to clamp down on the spread of the virus. In the city of Wenzhou, Zhejiang's capital Hangzhou and other surrounding municipalities, only one member of a household can leave every two days to buy groceries. Certain districts in Hangzhou scrapped this draconian approach less than a week after it was put in place after the public complained about the inconvenience.

Rural areas, where the population density is usually too low for grid management, have taken a more hands-on approach. Villages near the border with Hubei province or with high numbers of migrant workers have voluntarily barricaded themselves to prevent travelers from entering and residents from leaving. 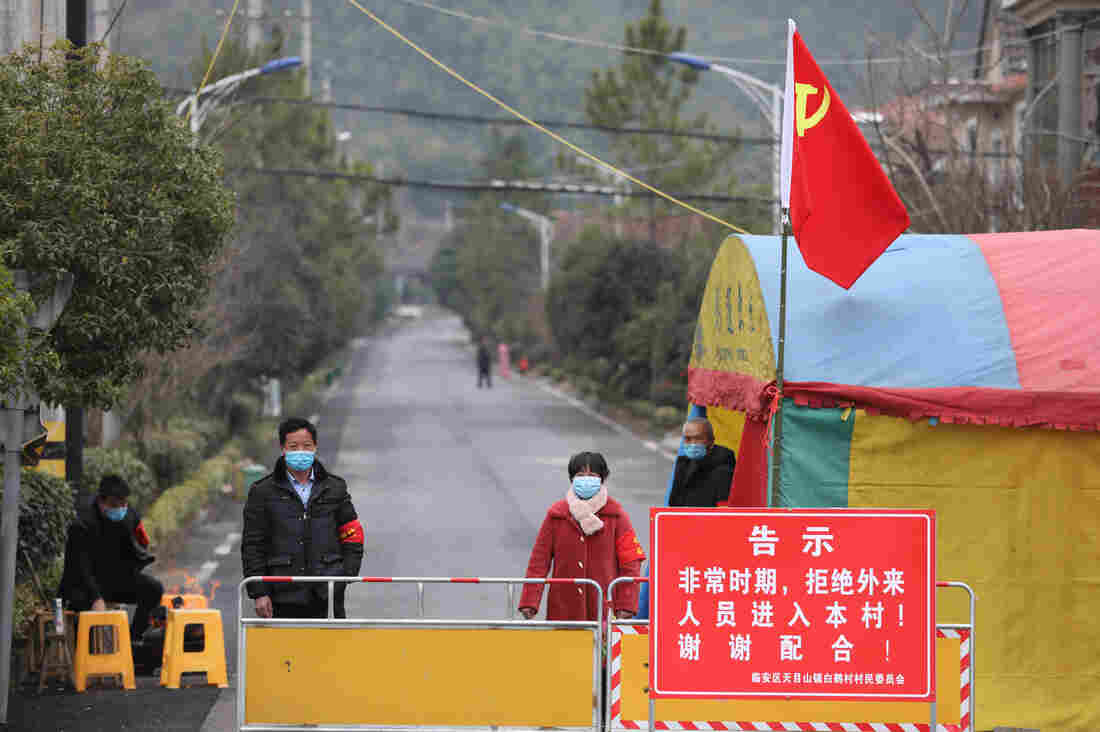 Volunteers guard a visitor checkpoint at the entrance to a village in Hangzhou in east China's Zhejiang province on Feb. 3. The notice warns that outsiders aren't allowed into the village. Feature China/Barcroft Media via Getty Images hide caption 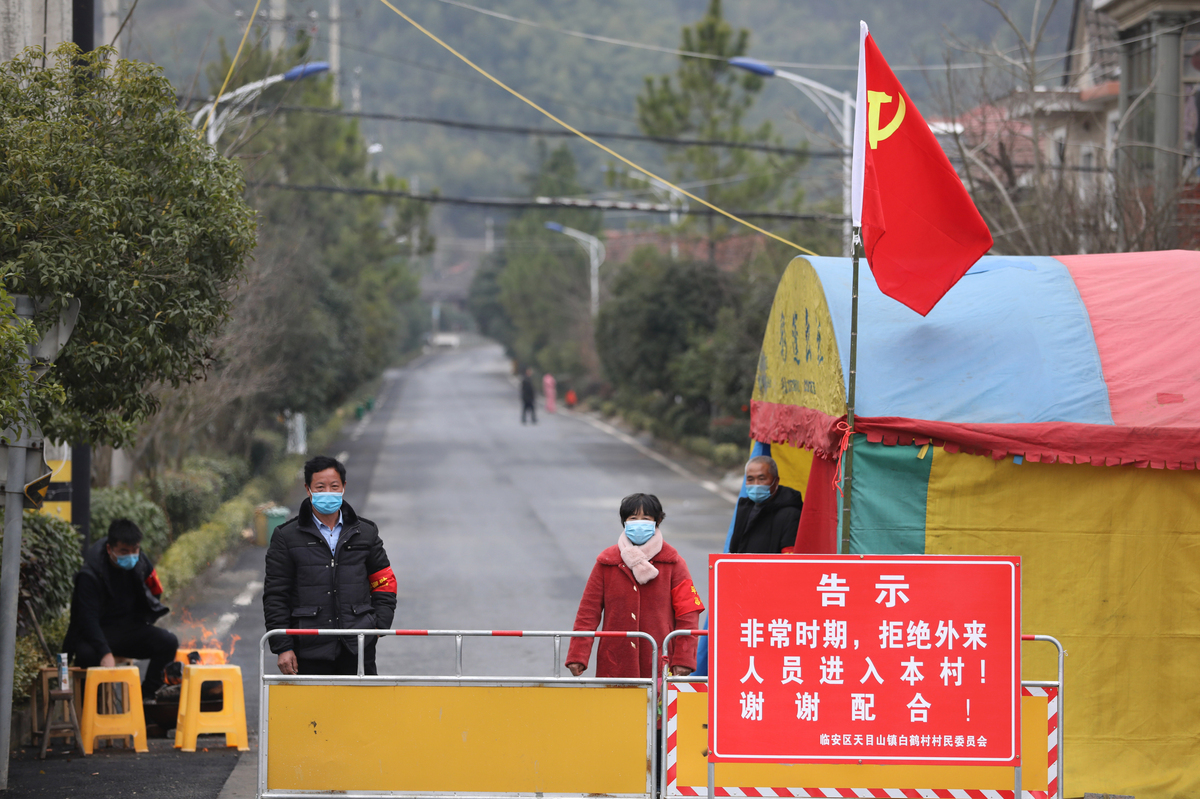 Volunteers guard a visitor checkpoint at the entrance to a village in Hangzhou in east China's Zhejiang province on Feb. 3. The notice warns that outsiders aren't allowed into the village.

These restrictions have decimated China's manufacturing sector, which is highly reliant on the labor of the country's approximately 300 million migrant workers. Factories across the country have remained shuttered well after Feb. 10, when people were supposed to get back to work after the Lunar New Year hiatus.

The blocking of movement has also stranded unlucky travelers. Several long-distance truck drivers who left Hubei in early January to deliver produce found themselves stuck in between cities that refused to let in vehicles with Hubei license plates.

China has turned to a number of apps designed to record the whereabouts of millions of travelers. Some cities rolled out their own digital tools: They require passengers to provide their names, phone numbers and traveling history to local authorities before disembarking from trains or planes. In Shanghai, for example, only those who filled out this digital form are allowed to leave the train station or airport.

Apps like Shanghai's serve both as a reminder to travelers that they need to be quarantined at home for 14 days and as a tracking tool for the government in case anyone in the database becomes infected.

Other apps record the whereabouts of local residents. In the southwestern province of Yunnan, anyone who frequents public places such as restaurants and transportation hubs must scan a QR code, a type of barcode in which a digital link is embedded, and leave a phone number. Local public health officials may contact those who came into contact with a virus carrier.

In Zhejiang, residents can fill out their recent travel history and any contact with known virus carriers in Alipay, a payment platform owned by tech giant Alibaba. They then receive a green code that allows them to move freely or a yellow or red code that requires them to self-quarantine for two weeks.

The onslaught of demands for personal information is raising concerns about how such data is used and stored.

So far, Yunnan claims that location information gathered from its citizens would be destroyed once the outbreak dies down. China's transportation ministry said it would only release people's travel records to public health agencies.

Yet the public remains skeptical. "The collection and use of personal information (facial recognition, phone number, home addresses) during this outbreak is truly a disaster," one Weibo user wrote.