Accessibility links
With The Coronavirus Looming, Hong Kong Keeps A Close Eye On The Health Of 7 Million Residents : Goats and Soda Challenges range from finding room to quarantine cruise ship passengers to tracking down cab drivers who drove suspected cases to a medical center. 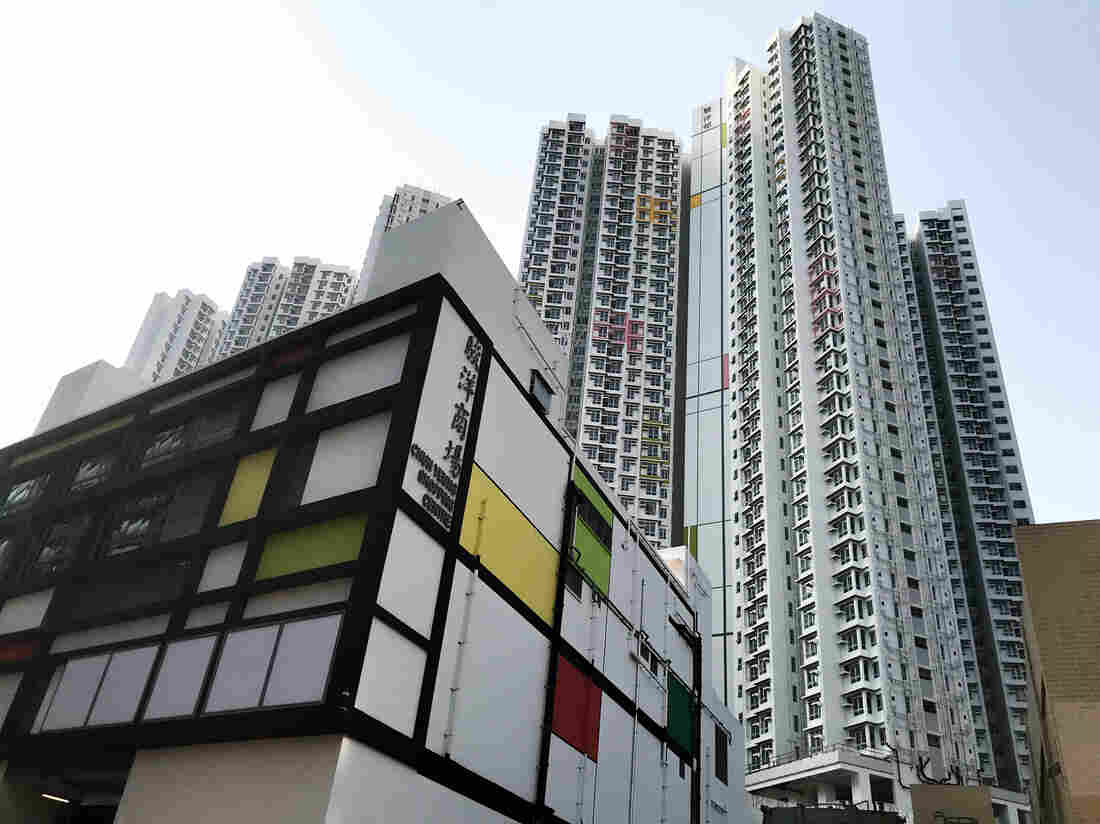 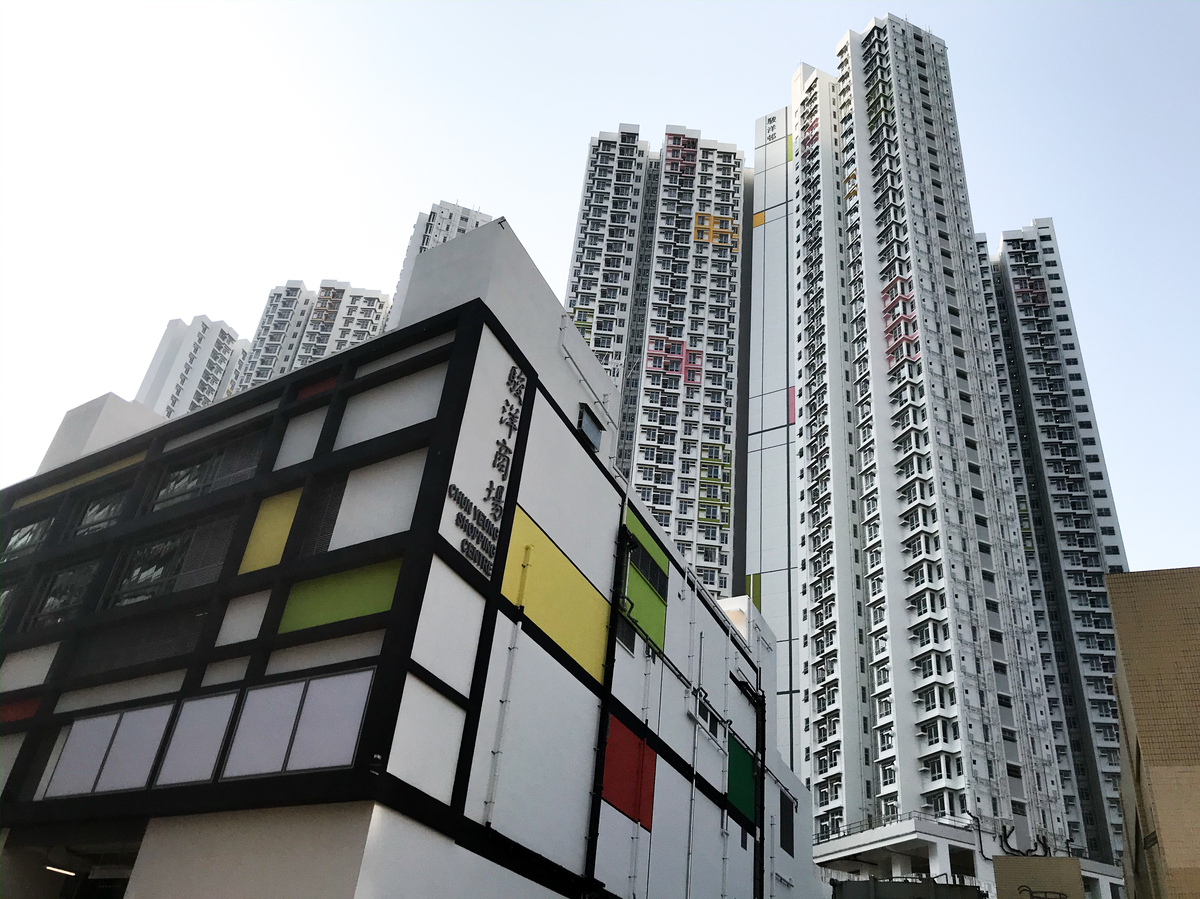 A new apartment complex in Hong Kong, called the Chun Yeung Estate, is being turned into a quarantine center.

Hong Kong is fighting an epic battle to keep the new coronavirus from exploding in its territory.

As of Sunday, the city of 7.5 million had only 70 confirmed cases. But with thousands of cases being reported just across its border posts in mainland China, the threat of this virus is forcing Hong Kong health officials to work frantically to try to keep the disease at bay.

Thousands of people who may have had contact with patients — or who have recently visited China — are confined to their homes under mandatory quarantine orders. The government is requiring anyone who enters from China to remain inside their homes or hotel rooms for 14 days. Hundreds more are locked in quarantine facilities under police guard. Doctors are determining who to test for the new virus, who to isolate and who to order to stay at home. Hospitals have dedicated entire wards to tending to suspect and confirmed COVID-19 cases. And in this battle, Hong Kong is constantly having to innovate and improvise.

The city has converted a newly built public housing complex into a quarantine facility. The complex, called the Chun Yeung Estate, is a cluster of 40-story high-rises spread over five blocks. The complex when finished will have nearly 5,000 apartments. None of the apartments have been rented out yet but now it's being turned in to one of the largest quarantine facilities in Hong Kong, capable of holding thousands of people.

Buses under heavy police escort arrived at Chun Yeung bringing passengers off the Diamond Princess cruise ship from Japan; they'll be confined for 14 days. Police have set up barricades around the entire complex — and not just to keep the quarantined passengers in. A few weeks ago protestors set fire to another high-rise that Hong Kong had been planning to use as a quarantine facility, fearing that the virus could spread in their neighborhood.

But Carrie Lam, the chief executive of Hong Kong, has stood firm with the plan to use Chun Yeung Estate as a quarantine center. "Hong Kong cannot afford to not have this center," she said at a press conference. The Chun Yueng housing estate, she said, is the city's only viable option for quarantining the nearly 300 people coming from the cruise ship. There is no plan B, she said.

"We will do all we can to protect this estate," Lam said of the police barricades and checkpoints that now surround the complex. "And I hope residents [of the neighborhood] will accept this arrangement, which is of benefit to the whole society."

Testing people for the virus is another area where the city has had to find new ways to respond. Hong Kong's public health system currently runs 700 to 800 laboratory tests a day for the new coronavirus. To ease the burden on doctors, clinics and laboratories, Dr. Lau Ka-hin, the Hospital Authority's chief manager for quality and standards, announced that hospitals are launching a new outpatient testing program for suspected COVID-19 cases. 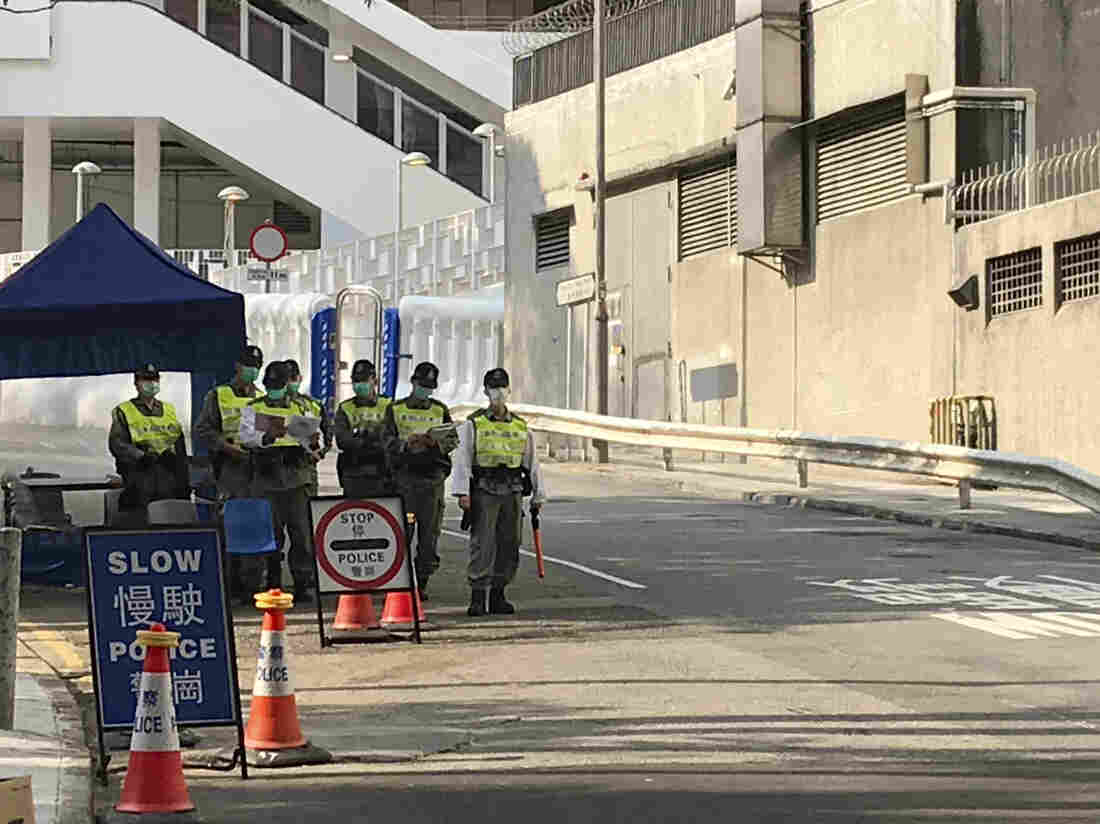 Hong Kong police guard a barricade outside the Chun Yeung public housing complex which has been turned in to the largest quarantine center in the city. Jason Beaubien/NPR hide caption 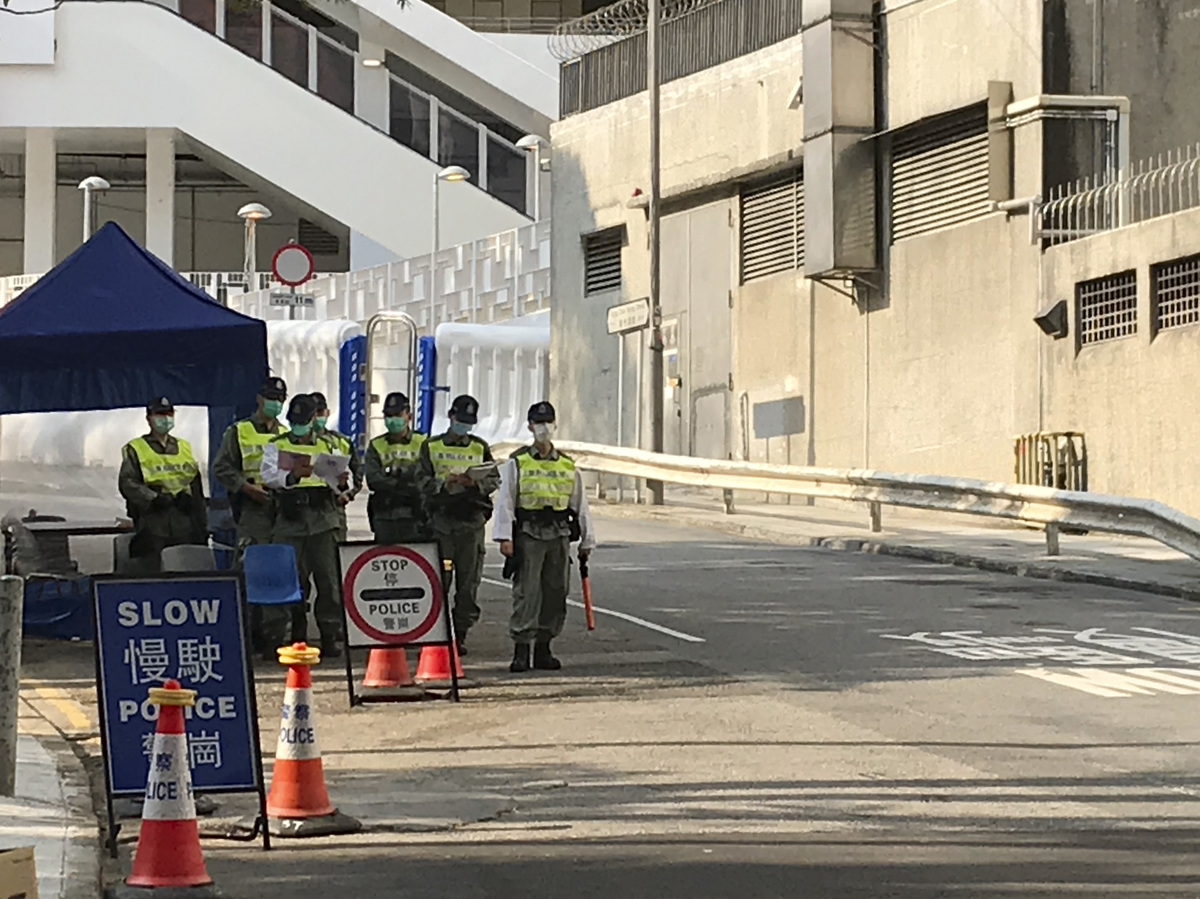 Hong Kong police guard a barricade outside the Chun Yeung public housing complex which has been turned in to the largest quarantine center in the city.

The outpatient program is for individuals "age 18 with fever, upper respiratory tract infection or pneumonia," Lau said. "And if the clinical diagnosis is that they don't need to be hospitalized, then the accident and emergency department will give a specimen tube to the patient."

The patient is instructed to take the tube home, then first thing in the morning spit into the vial and return the sample to the lab. There is a possibility that patients will not take the sample correctly, Lau said. And of the first 300 specimen tubes sent home, only about 250 were returned. Still, Lau sees advantages in this new initiative.

"The patient does not have to stay in the hospital to wait for the test results," Lau said, unlike the current procedure.

The vast majority of people test negative, so this new procedure will also keep those patients out of the health-care system and away from patients who may actually be infected with the virus.

"After a patient sends in a specimen it will take about two to three working days to complete the test on the virus," Lau said. "If the test result is negative, we will inform the patient by text message. But if [the] test is positive, then the department of health will call the patient and arrange for the patient to go into hospital for treatment in isolation."

In addition to setting up new testing programs for the virus, Hong Kong's health department is also attempting to track down hundreds of people who may have been in contact with confirmed cases.

Dr. Chuang Shuk-kwan, the head of the communicable disease branch for the health department, said the primary focus is on getting in touch with close family members as they tend to be at highest risk.

"But for other contacts, sometimes it's very difficult," Chuang said. She said airlines and trains often don't have the phone number or other contacts for passengers, and it's impossible to track them down after they've disembarked. Sometimes the passengers are no longer even in Hong Kong.

For instance, the city was notified that 36 Hong Kong residents were aboard the MS Westerdam cruise ship, where a passenger tested positive after disembarking in Cambodia. The health department was able to connect with 24 of them but is still trying to track down the other 12. 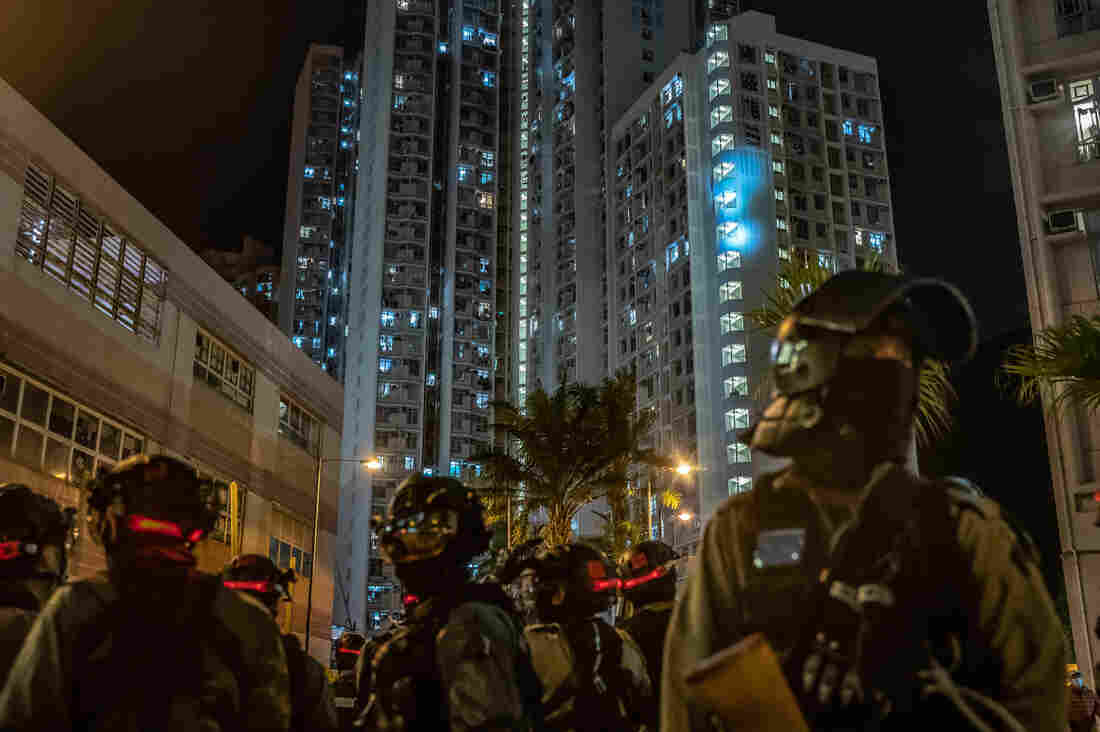 In January, Hong Kong residents protested a proposal to use newly constructed housing as a quarantine site for patients with COVID-19. Anthony Kwan/Getty Images hide caption 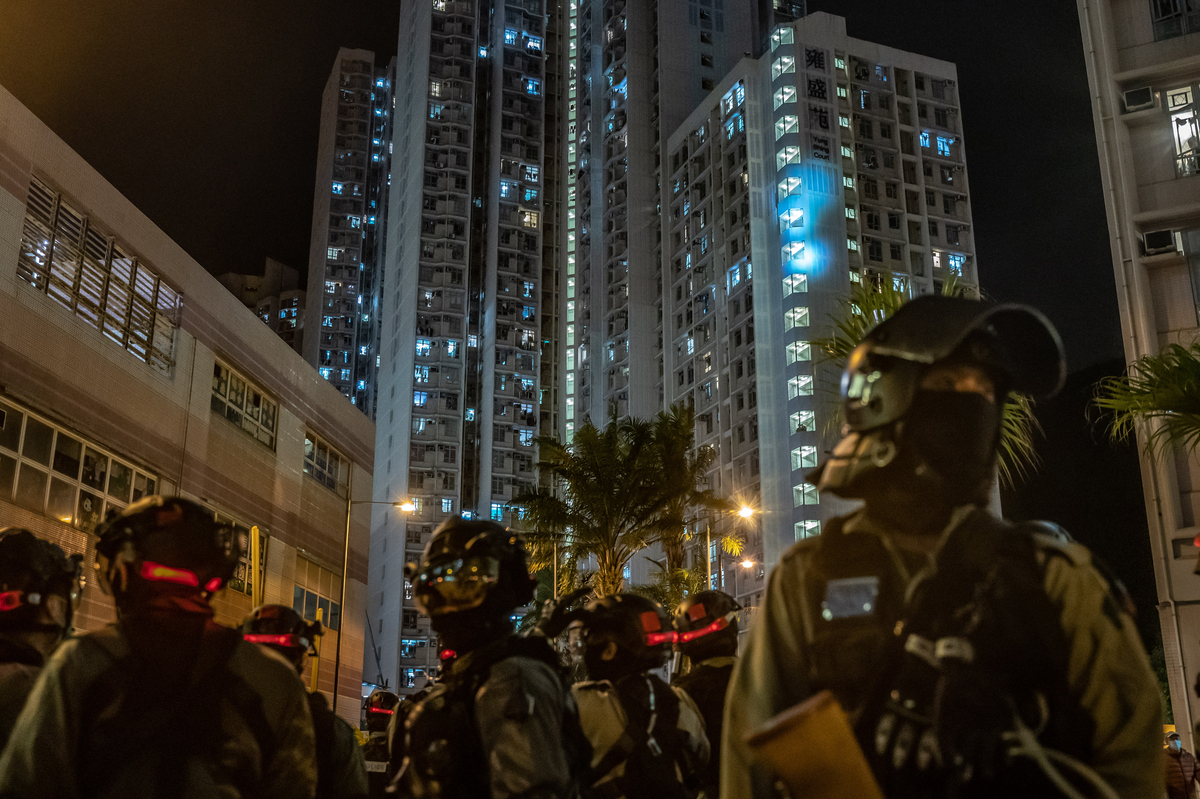 In January, Hong Kong residents protested a proposal to use newly constructed housing as a quarantine site for patients with COVID-19.

Last week two people who'd taken a bus to Hong Kong from Macau both tested positive. Contact tracers are trying to find the others who were on that bus.

Chuang said there are some situations where it's nearly impossible to find all the contacts.

For instance, "it is very difficult" to find taxi drivers who may have driven an ill person to a hospital or clinic, Chuang said, "because the patient cannot provide a license plate or car plate number for the taxi. We try all sorts of means and sometimes it's futile."

As if the health department didn't have enough extra work trying to chase down potential contacts of confirmed cases, it's also overseeing nearly 12,000 people who are under mandatory home quarantine after being diagnosed with COVID-19.

In addition to the locked quarantine centers like the public housing towers holding high-risk individuals, like the evacuees from the Diamond Princess, Hong Kong also has a home quarantine program for people considered at lower risk of infection — for instance, people who had been in mainland China but were not in contact with a COVID-19 patient. Currently there are nearly 12,000 people in the city confined to their homes, most of them Hong Kong residents recently returned from China. The Health Department monitors them by video calls and tracks their cellphones for 14 days.

Higher risk people in this program including close contacts of existing cases and anyone who'd been in Hubei province are fitted with wrist monitors to make sure they don't leave their apartments. Given the huge number of people under these quarantine orders and the scant staff from the health department who are supposed to keep tabs on them, for many this ends up as a quarantine under the honor system. The first batch of 663 persons to serve out their 14 mandatory home quarantine were released on Saturday. None of them developed the disease.