Accessibility links
Coronavirus Update: Containment Is Possible, WHO Says : Goats and Soda "We have never before seen a respiratory pathogen that is capable of community transmission but which can also be contained with the right measures," the WHO's Tedros Adhanom Ghebreyesus said. 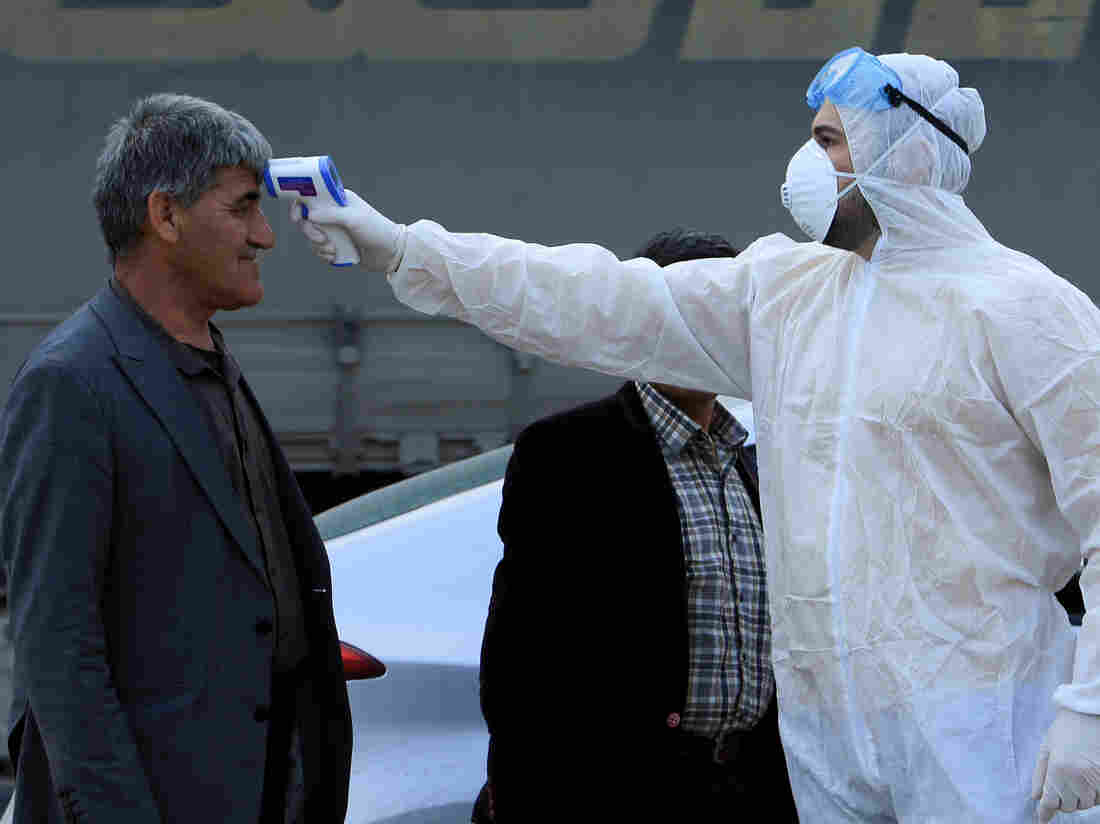 As the coronavirus that causes COVID-19 spreads to more areas, a health worker checks a man's temperature at a checkpoint on the outskirts of Duhok, Iraq, last Tuesday. Ari Jalal/Reuters hide caption 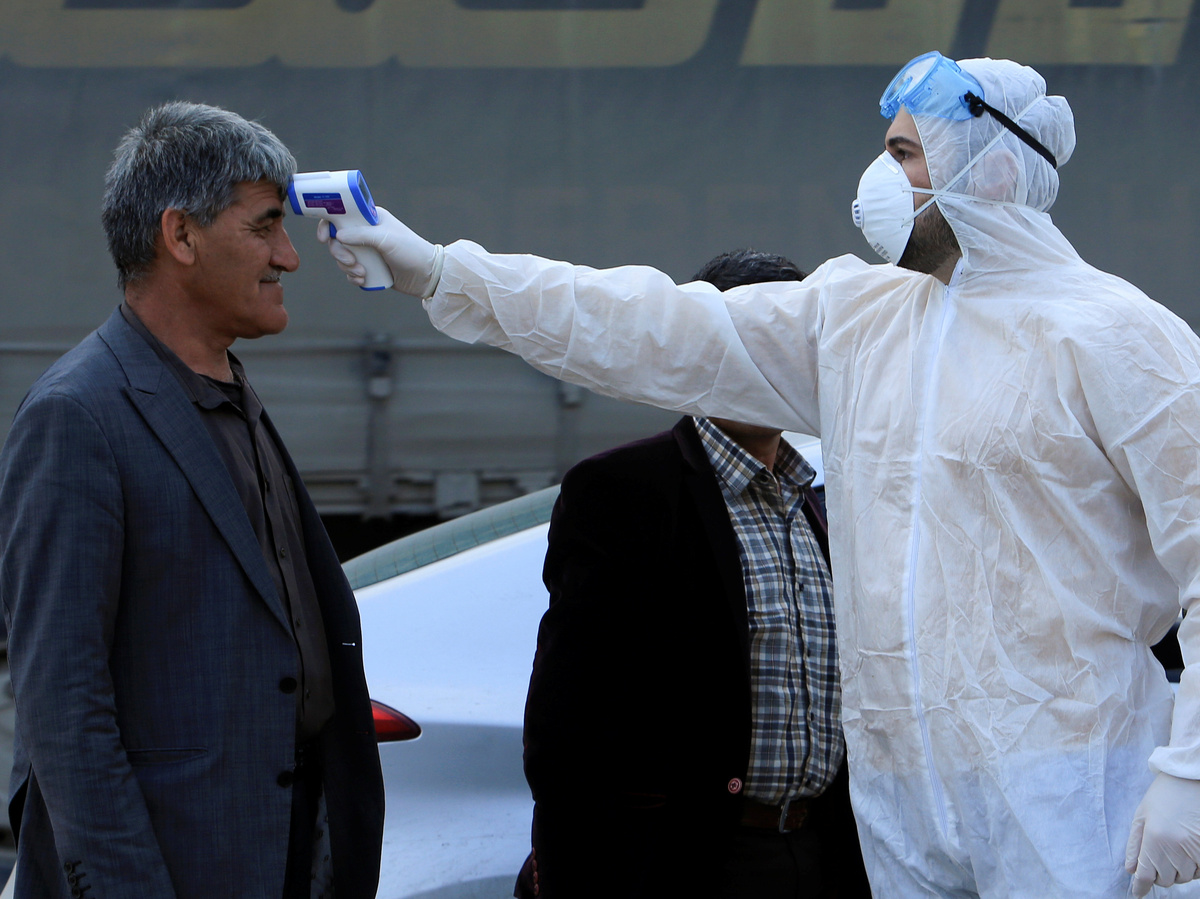 As the coronavirus that causes COVID-19 spreads to more areas, a health worker checks a man's temperature at a checkpoint on the outskirts of Duhok, Iraq, last Tuesday.

The coronavirus that causes COVID-19 poses a unique challenge to health authorities, the head of the World Health Organization said on Monday as he gave an update on the viral epidemic that has now touched at least 62 countries. But he added that the virus is also showing signs that it can be contained.

"We are in unchartered [sic] territory," WHO Director-General Tedros Adhanom Ghebreyesus said at a briefing in Geneva. "We have never before seen a respiratory pathogen that is capable of community transmission but which can also be contained with the right measures."

Contrasting COVID-19 with the flu, Tedros said, "If this was an influenza epidemic, we would have expected to see widespread community transmission across the globe by now, and efforts to slow it down or contain it would not be feasible.

"But containment of COVID-19 is feasible and must remain the top priority for all countries," he added, crediting quick and aggressive responses from some countries in limiting transmission of the deadly virus.

By far, China still has more cases of the virus that causes COVID-19 than any other country, with more than 80,000 cases. But while the coronavirus has been contained in some areas, the WHO is concerned about epidemics in four countries: South Korea, Italy, Iran and Japan.

"In the last 24 hours, there were almost nine times more cases reported outside China than inside China," Tedros said at the briefing.

As the virus spreads, health officials are working to learn the patterns and characteristics that make it unique. For one thing, there are signs that it doesn't sicken children as frequently as it does adults — a metric often referred to as an "attack rate."

"What we've seen is higher attack rates in adults than we've seen in children," WHO epidemiologist Maria Van Kerkhove said, referring to research collected by a joint WHO-China team working on the coronavirus.

But Van Kerkhove, who recently spent two weeks in China, also cautioned that information about the coronavirus' impact on different demographic groups is still coming in and that the collection of more "stratified" data has only just begun. Up to now, she said, most of the reporting has focused on patients' symptoms.

Coronavirus Testing: What To Know As It Becomes Available Across The U.S.

There are currently more than 90,000 confirmed cases of the respiratory coronavirus in the world, according to a tracking tool created by Johns Hopkins University's Whiting School of Engineering. Of that number, slightly more than half — nearly 45,600 people — have recovered from the virus. But more than 3,000 people have died.

South Korea now has at least 4,212 coronavirus cases, after reporting nearly 500 new cases on Monday. The country's health agencies are in the process of testing over 33,000 more people. More than 71,000 people have tested negative for the virus, the Korea Centers for Disease Control and Prevention says.

More than 3,000 cases were confirmed in the city of Daegu, where most of the cases are related to a Christian sect called the Shincheonji Church of Jesus.

South Korea's CDC agency says the country's main strategy for coping with COVID-19 will now focus on mitigating the virus that causes the disease, rather than containing it.

Japan currently has 268 patients who were infected by the coronavirus, says the country's Ministry of Health, Labor and Welfare. The figure does not include passengers and crew from the Diamond Princess cruise ship.

One of the hardest-hit areas is the northern prefecture of Hokkaido, which has at least 72 cases.

All of Japan's schools, from the elementary level through high school, are now closed in an attempt to keep the virus from spreading further. The government plans to pay up to about $80 per day to make up for income lost because of parents taking leave from work, according to NHK World-Japan.

Italy now has 1,835 coronavirus cases, including more than 1,200 in the Lombardy region, which includes Milan.

Italy's Health Ministry says 52 people have died after developing COVID-19. Nearly 1,000 people are currently living in isolation in their homes, and 742 people are hospitalized — including 166 who are in intensive care.

"For 10 days, 11 towns in the Lombardy and Veneto regions have been in lockdown. Public gatherings are banned, and schools and universities are closed," NPR's Sylvia Poggioli reports from Rome. "The national health institute says the coming week will be crucial to determine whether these measures will succeed in at least slowing down the rate of contagion."

Iran is reporting 1,501 cases, including 54 deaths, according to the WHO's regional office in the eastern Mediterranean. That total represents a significant spike: Iran's deputy health minister, Ali-Reza Raeesi, said 523 new cases had been added to the total since Sunday, according to the Islamic Republic News Agency.

To help fight the epidemic in Iran, the WHO has sent a charter flight with medical experts and enough supplies and protective gear to equip more than 15,000 health care workers, the organization says.

The shipment includes more than 1,000 screening tests — "enough to screen nearly 100,000 people," the WHO says. The supplies were flown to Tehran aboard a cargo plane from the United Arab Emirates Air Force.

Britain, France and Germany are sending to Iran an aid package worth about $5.5 million, including equipment for laboratory tests, protective body suits and gloves. That shipment was being transported Monday, Britain's Foreign Office said, describing the material as "a comprehensive package of both material and financial support to combat the rapid spread of the disease."