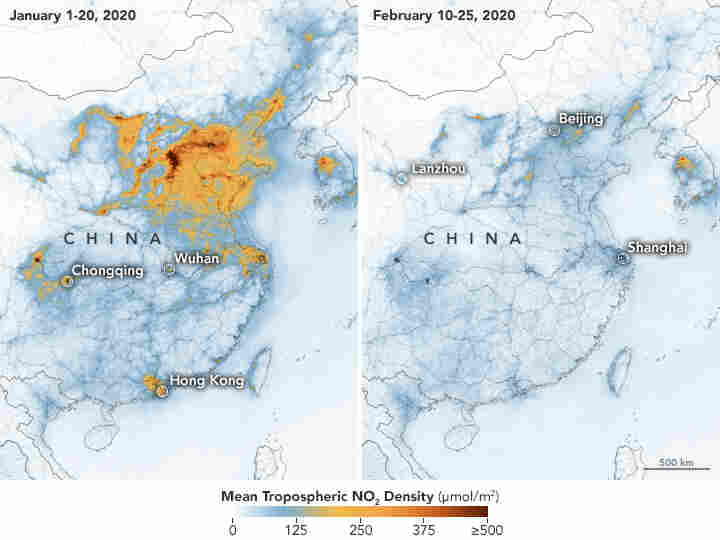 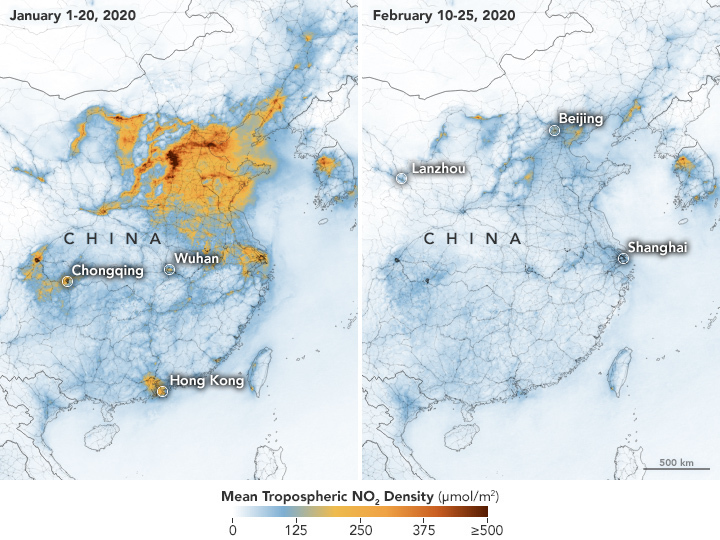 February satellite readings in the troposphere (the lower atmosphere) of nitrogen dioxide (NO2), a pollutant primarily from burning fossil fuels, show a dramatic decline compared to early January when power plants were operating at normal levels.

As China seeks to control the spread of COVID-19, fewer cars are driving, fewer factories are running and — in some places — skies are clearer.

Air pollution levels have dropped by roughly a quarter over the last month as coal-fired power plants and industrial facilities have ramped down so employees in high-risk areas can stay home. Levels of nitrogen dioxide, a pollutant primarily from burning fossil fuels, were down as much as 30%, according to NASA.

"It is an unprecedentedly dramatic drop in emissions," says Lauri Myllyvirta, lead analyst at the Centre for Research on Energy and Clean Air, who tallied the reductions. "I've definitely spoken to people in Shanghai who said that it's been some of the most pristine blue skies that they remember over the winter."

Myllyvirta estimates that China's carbon emissions have dropped by a quarter over the same period. While that's a tiny fraction of its overall annual emissions, it's substantial in a worldwide context, since China is the largest emitter of greenhouse gases.

There's potentially a health benefit — although any gains due to a drop in pollution are set against the toll taken by the coronavirus outbreak.

Air pollution is estimated to contribute to more than 1 million premature deaths in China each year. Fine particle pollution, also known as PM 2.5, can enter the bloodstream through the lungs and has been linked to asthma attacks, heart attacks and respiratory problems.

Even a short-term reduction in air pollution can make a difference.

"There is no question about it: When air quality improves, that will be associated with a reduction in health-related problems," says Jim Zhang, professor of global and environmental health at Duke University.

Zhang says that was evident during the 2008 summer Olympics in Beijing. To help improve the air, government officials shut factories and dramatically limited car travel before and during the games. Levels of some air pollutants dropped by half.

He and colleagues studied a group of young men and women in Beijing and found that during that time period, their lung and cardiovascular health improved. He also followed pregnant women.

"What we found is that the kids whose mothers had a third trimester pregnancy during the Olympics when the air quality was better, their birth weight was substantially higher than the kids who were born a year before and a year later," he says.

"It would be a mischaracterization to say that the coronavirus was beneficial to health because of these air pollution reductions," says Jill Baumgartner, associate professor and epidemiologist at McGill University.

Baumgartner says people with health issues other than COVID-19 may have avoided seeing doctors during the outbreak or potentially couldn't receive treatment they needed in areas with overtaxed health systems.

Those isolated at home and avoiding crowds may also have been exposed to more indoor air pollution.

Not all cities have experienced the recent improvements. In mid-February, Beijing saw a spike in pollution due to local weather patterns trapping air in the region.

The drop in air pollution and carbon emissions is also likely to disappear as Chinese industry ramps up again in an attempt to offset its economic losses.

"If you think back to the global financial crisis, the immediate impact was for China's emissions to fall," says Myllyvirta. "But then the government response was to roll out the biggest stimulus package in the history of mankind that then drove China's emissions and global emissions up for years."