Accessibility links
COVID-19: 'We Can Push This Virus Back,' WHO Leader Says Of Coronavirus : Goats and Soda As the virus that causes the COVID-19 illness spreads around the world, governments have a chance to "break the chains of transmission," WHO Director-General Tedros Adhanom Ghebreyesus says.

COVID-19: 'We Can Push This Virus Back,' WHO Leader Says Of Coronavirus

COVID-19: 'We Can Push This Virus Back,' WHO Leader Says Of Coronavirus 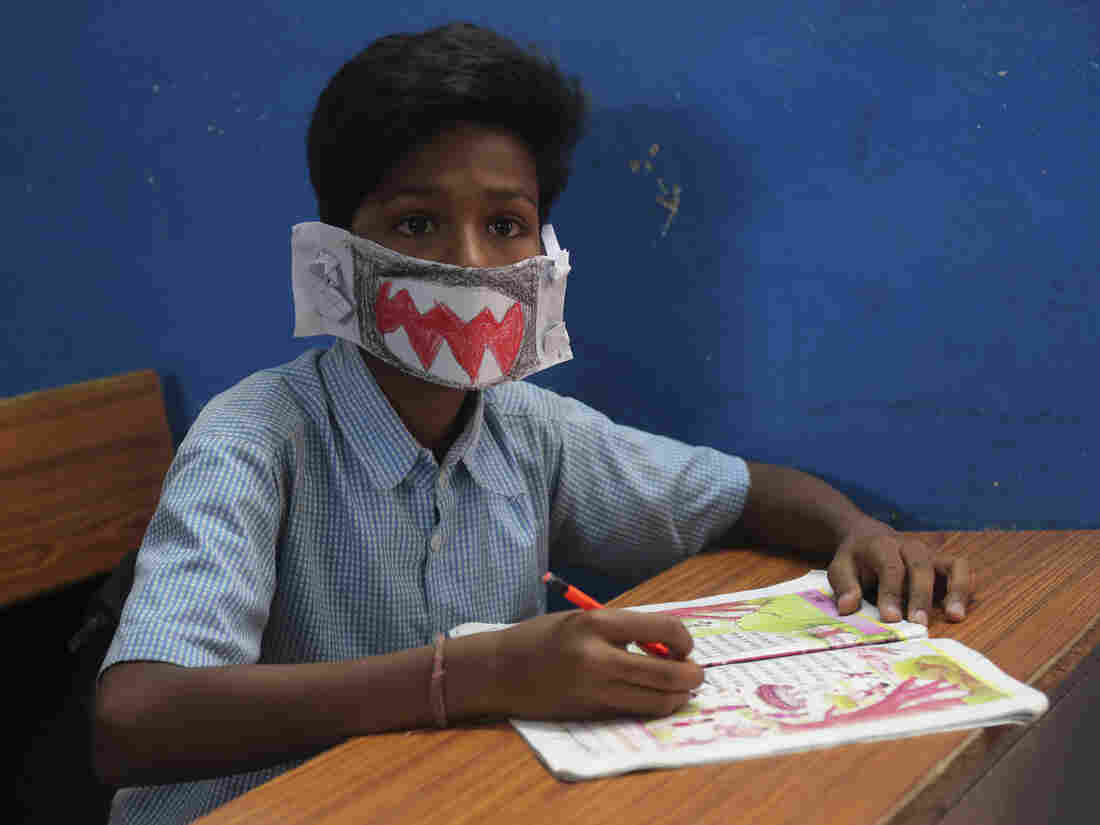 An Indian student wears a self-made mask during class in Hyderabad, India, on Wednesday. The country has reported at least 29 cases of the virus. Mahesh Kumar A./AP hide caption 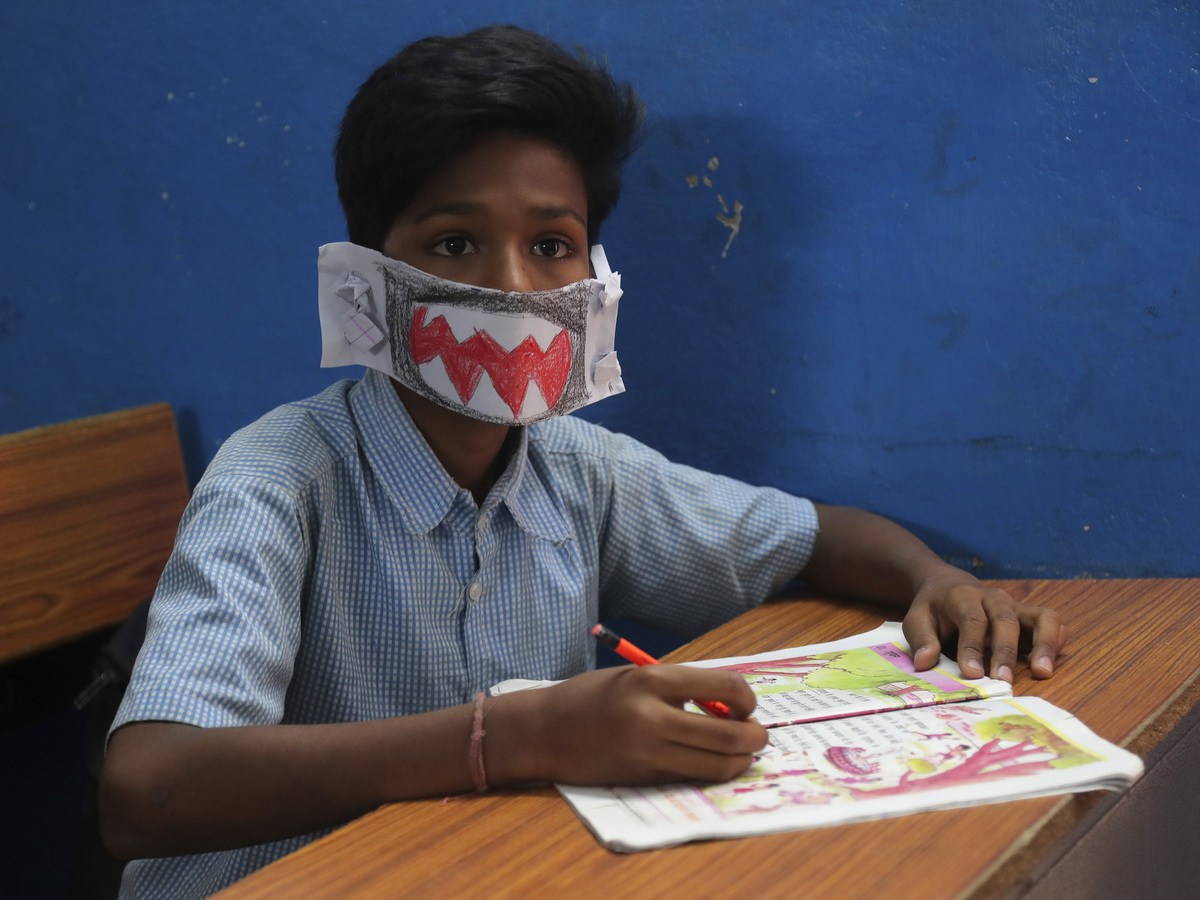 An Indian student wears a self-made mask during class in Hyderabad, India, on Wednesday. The country has reported at least 29 cases of the virus.

The coronavirus that causes COVID-19 is now in at least 75 countries, the World Health Organization said in a Wednesday update on the respiratory disease that has killed more than 3,200 people globally. Italy is being hit particularly hard, with more than 2,000 cases.

Despite the increase in cases, WHO Director-General Tedros Adhanom Ghebreyesus says, "We can push this virus back."

"This virus is not SARS, it is not MERS, and it is not influenza," Tedros said at a briefing in Geneva. "The nature of this virus means we have an opportunity to break the chains of transmission and contain its spread."

The COVID-19 illness has been confirmed in more than 94,000 people worldwide. Of that number, 51,000 people have recovered, according to a dashboard created by the Johns Hopkins Whiting School of Engineering.

More than 80,000 cases are in mainland China, and most of that country's new cases continue to be reported in Hubei province – home to Wuhan, the center of the coronavirus outbreak.

The U.S. has reported more than 100 cases nationwide, and health officials expect the number to rise as more labs gain the ability to test for the virus. At least nine people in the U.S. have died — all in Washington state.

In recent days, the fastest growth of new coronavirus cases has come outside of China – particularly in South Korea, Italy, Iran and Japan.

South Korea now has 5,328 cases, according to the Korea Centers for Disease Control and Prevention. Of that figure, 32 people have died and 41 have been discharged after recovering from the disease.

As of late Wednesday local time, South Korea had carried out more than 136,000 tests for the coronavirus.

At least 95 countries and territories have imposed restrictions to limit travel between their regions and South Korea, including 36 total bans on South Korean citizens, according to South Korea's Ministry of Foreign Affairs.

Italy has also been walloped by the virus, with 2,263 confirmed cases, according to its health ministry. COVID-19 is also linked to 79 deaths.

People remain under quarantine in the "red zone" of the outbreak, which includes 10 towns in the Lombardy region (which has 1,520 cases) and one in Veneto, according to the health ministry.

In the affected areas, schools and universities have been closed and public events canceled; Italian officials are considering extending those shutdowns nationwide.

Iran has confirmed more than 2,900 coronavirus cases. It also has had 92 deaths — the most of any country outside of China. Friday prayer gatherings has been canceled in every provincial capital.

"Those infected include top leaders and clerics. President Hassan Rouhani posted to his official website the news that coronavirus has now affected almost every province in the country," NPR's Peter Kenyon reports. "Even so, Rouhani told a cabinet meeting that Iran would get over the crisis quickly."

To stop the spread of infection, officials have shut down schools and universities and have canceled public gatherings such as concerts and sport events.

Japan has more than 280 cases, and the country has performed more than 8,111 tests for the novel coronavirus, the health ministry says.

Japan's new cases include a man in his 40s who arrived at an airport near Nagoya and tested positive for the virus. The man arrived back in his home country after traveling internationally for more than two weeks, making stops in Cambodia, Vietnam and the Philippines. He developed a fever on Feb. 21 and respiratory symptoms emerged this week, including chest pain.

While the WHO's top priority is to help contain COVID-19, Tedros acknowledged that countries should also prepare for "sustained community transmission" within their populations, suggesting COVID-19 could continue to disrupt daily life and tax health systems in more areas.

"At the very least, we can slow it down and buy time," he said.

To help stop the virus from spreading, the WHO recommends washing hands for at least 20 seconds or using a hand sanitizer. Face masks should be worn only by people who are either sick or are caring for someone who is, the agency says.

The aggressive spread of the novel coronavirus has prompted speculation that the Summer Olympics in Tokyo might be postponed or canceled. But on Wednesday, International Olympic Committee President Thomas Bach insisted that the games – which have already sold millions of tickets – will go on.

"Despite Bach's confidence, a senior IOC official recently said there are 2-3 months left before a final decision has to happen," NPR's Tom Goldman reports.