Accessibility links
As Coronavirus In China Wanes, Italy, South Korea See Brunt Of Epidemic : Goats and Soda The United Kingdom's health minister has also been diagnosed with coronavirus – one of nearly 400 confirmed cases in that country, as Turkey on Wednesday announced its first case. 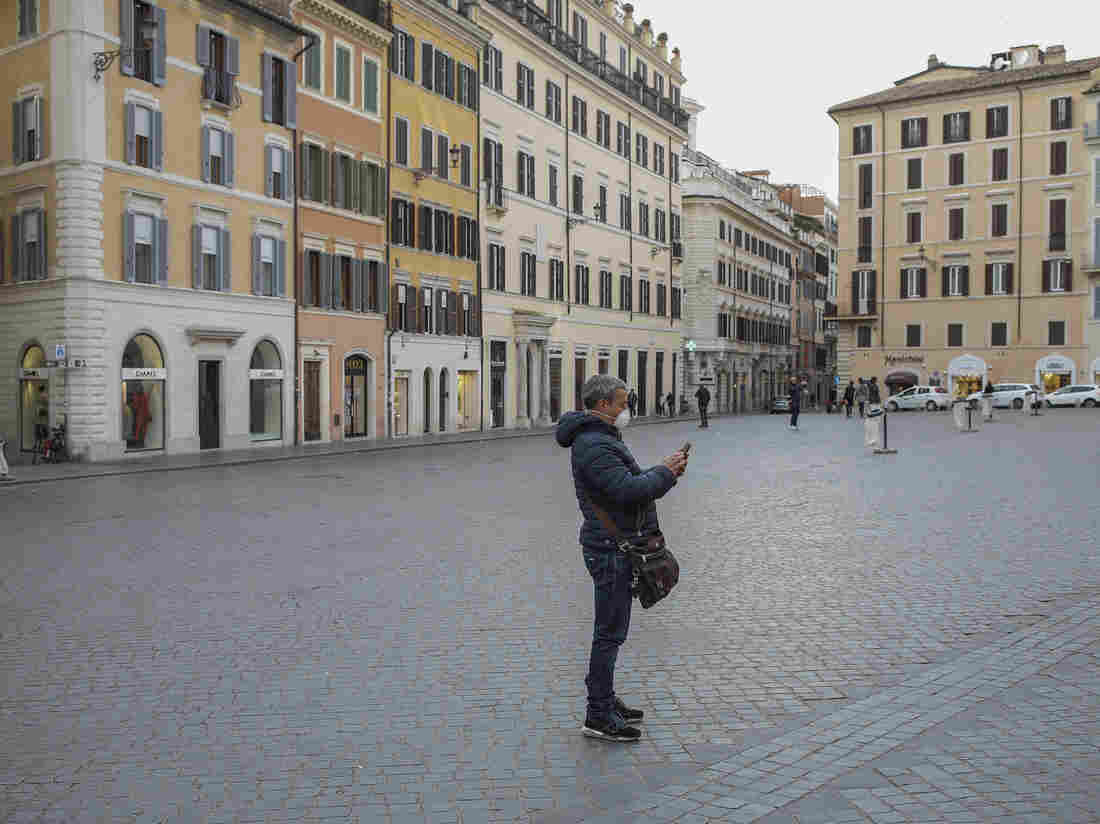 A person wearing a face mask at the Piazza Di Spagna in Rome during the coronavirus emergency, on Tuesday, after the Italian government imposed national restrictions to control the spread of the COVID-19 disease. Ernesto Ruscio/Getty Images hide caption 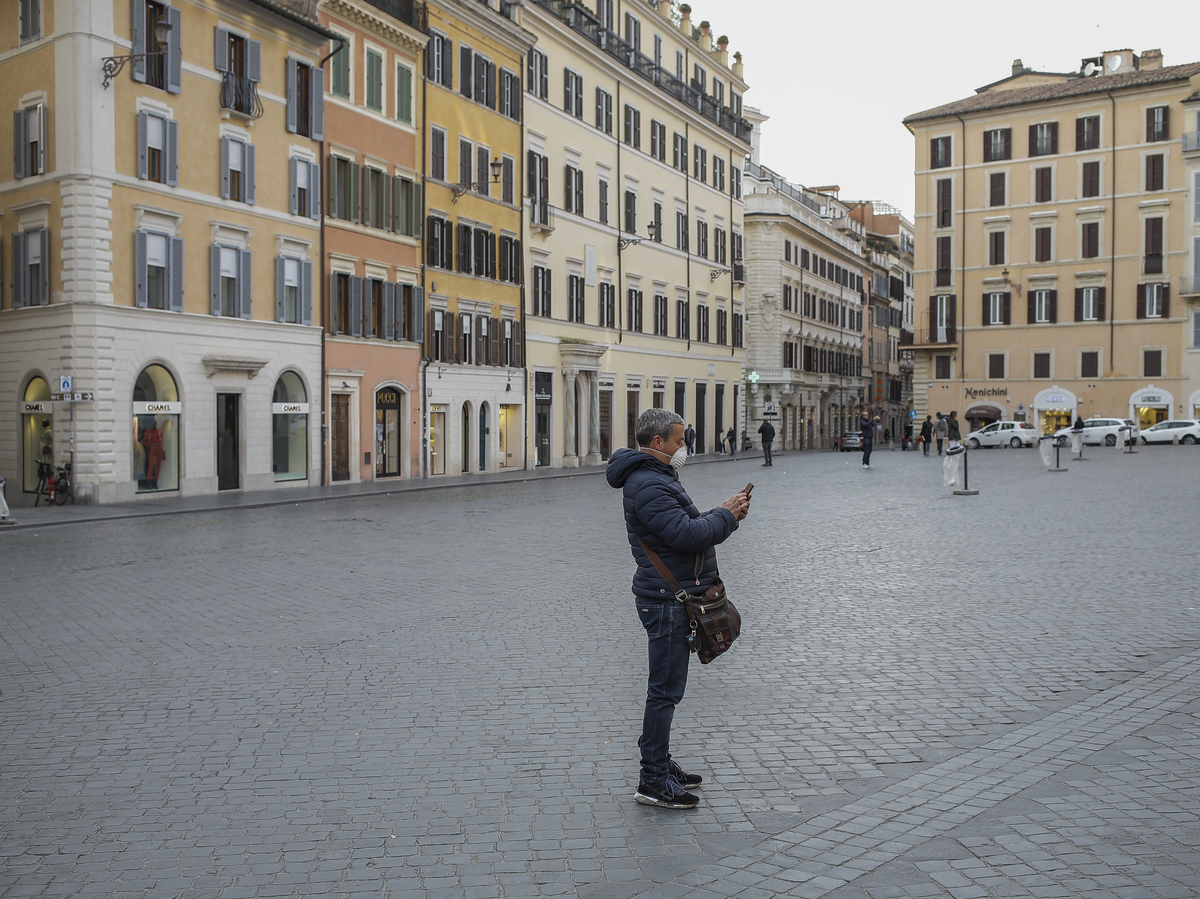 A person wearing a face mask at the Piazza Di Spagna in Rome during the coronavirus emergency, on Tuesday, after the Italian government imposed national restrictions to control the spread of the COVID-19 disease.

The United Kingdom's health minister has been diagnosed with novel coronavirus infection – one of nearly 400 confirmed cases in that country, as Turkey on Wednesday announced its first case of the disease, which has now spread to some 110 countries.

Meanwhile, Italy, which reported 168 new deaths on Tuesday, bringing the total there to 631, has reported more than 10,000 total cases — placing it second only to China in the number of reported infections. The country has encouraged its 62 million people to stay at home even as its economy, reliant on tourism, manufacturing and retail, is taking a heavy hit.

With the country on virtual lockdown, Prime Minister Giuseppe Conte said Wednesday that Italy would earmark the equivalent of $28.3 billion to tackle the crisis.

Life During Coronavirus: What Different Countries Are Doing To Stop The Spread

Malta, Spain and Albania have banned air traffic from Italy. British Airways and Air Canada also have suspended all flights to the country, while Austria and Slovenia have restricted overland travelers from Italy.

Also on Wednesday, South Korea reported a cluster of new cases, bringing the total there to more than 7,750, even as that country has shown some progress in containing the further spread of the epidemic, thanks in part to widespread testing, according to officials.

Tracking The Impact Of Coronavirus In Real Time

In China, where the epidemic began, the daily case numbers continue to drop. On Wednesday, just 24 new infections were reported, 10 of which involve people who had traveled abroad, suggesting a lower rate of community transmission, according to health authorities.

China's National Health Commission said six new cases had been reported in the capital, Beijing, but that five of them were patients who had traveled to Italy and the sixth to the U.S., according to the South China Morning Post.

The precipitous drop in new cases in China, where 80,778 cases have been diagnosed since the outbreak began in December, caused local officials to begin relaxing travel restrictions that were imposed in January, as the government struggled to contain the virus' spread.

Chinese President Xi Jinping, who on Tuesday visited the city of Wuhan, where the virus was first identified, declared: "We will certainly defeat this epidemic."

Nissan, the Japanese automaker, said Wednesday that it planned to restart production at two Chinese plants, including one in Hubei province, which was the epicenter of the outbreak and where the vast majority of the country's infections and deaths have occurred.

In the U.K., the Bank of England announced Wednesday that it would cut interest rates to 0.25% from 0.75% to counteract fallout from the epidemic. The move followed a similar one last week by the U.S. Federal Reserve, which lowered the federal funds rate to a range of 1-1.25%.

The central bank's decision came on the same day that the country's health minister, Nadine Dorries, a 62-year-old former nurse, said she had taken ill with the virus. Dorries, a conservative member of Parliament, said she was heeding all precautions and had self-isolated at home after testing positive, according to the BBC.

"It's been pretty rubbish but I hope I'm over the worst of it," Dorries wrote in a tweet, adding that she was "more worried" about her 84-year-old mother, "who is staying with me and began with the cough today."

Thanks for so many good wishes. It's been pretty rubbish but I hope I'm over the worst of it now. More worried about my 84yo mum who is staying with me and began with the cough today. She is being tested tomorrow. Keep safe and keep washing those hands, everyone.

The news came as England's publicly funded National Health Service announced that it was scaling up its capacity to test for the virus from about 1,500 a day to 10,000, the BBC said.

The health minister in Turkey, meanwhile, said Wednesday that a male patient who had traveled abroad has been isolated after confirmation of infection. Family members who had contact with the man were also quarantined, the minister, Fahrettin Koca, said.

"An early diagnosis was made. If there is an infection in the country, it is very limited," the state-run Anadolu Agency quoted Koca as saying.

"The coronavirus is not stronger than the measures we will take," he said.