Accessibility links
Opinion: Coronavirus Likely To Hit Refugees Hard : Goats and Soda While there are no known cases yet of coronavirus in refugee camps, the disease may hit these communities hard, warns Muhammad H. Zaman of Boston University — and it's urgent to mitigate risk. 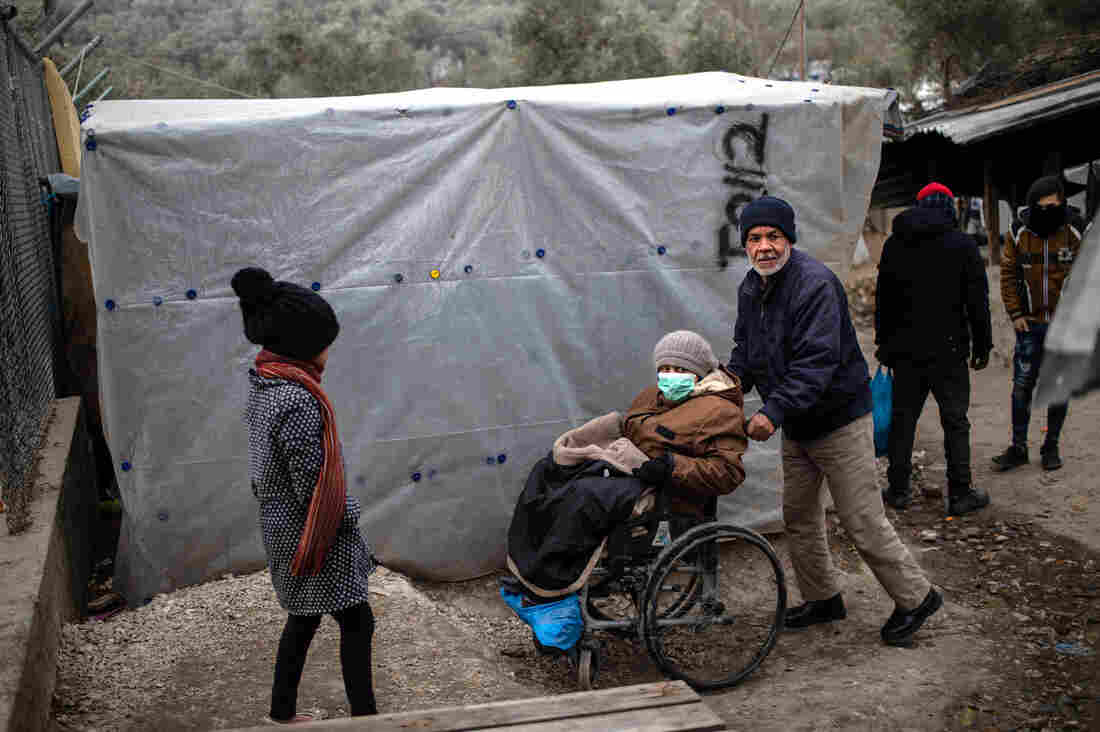 A scene from the Moria refugee camp on the island of Lesbos, Greece, in January. Angelos Tzortzinis/dpa/Picture Alliance via Getty Images hide caption 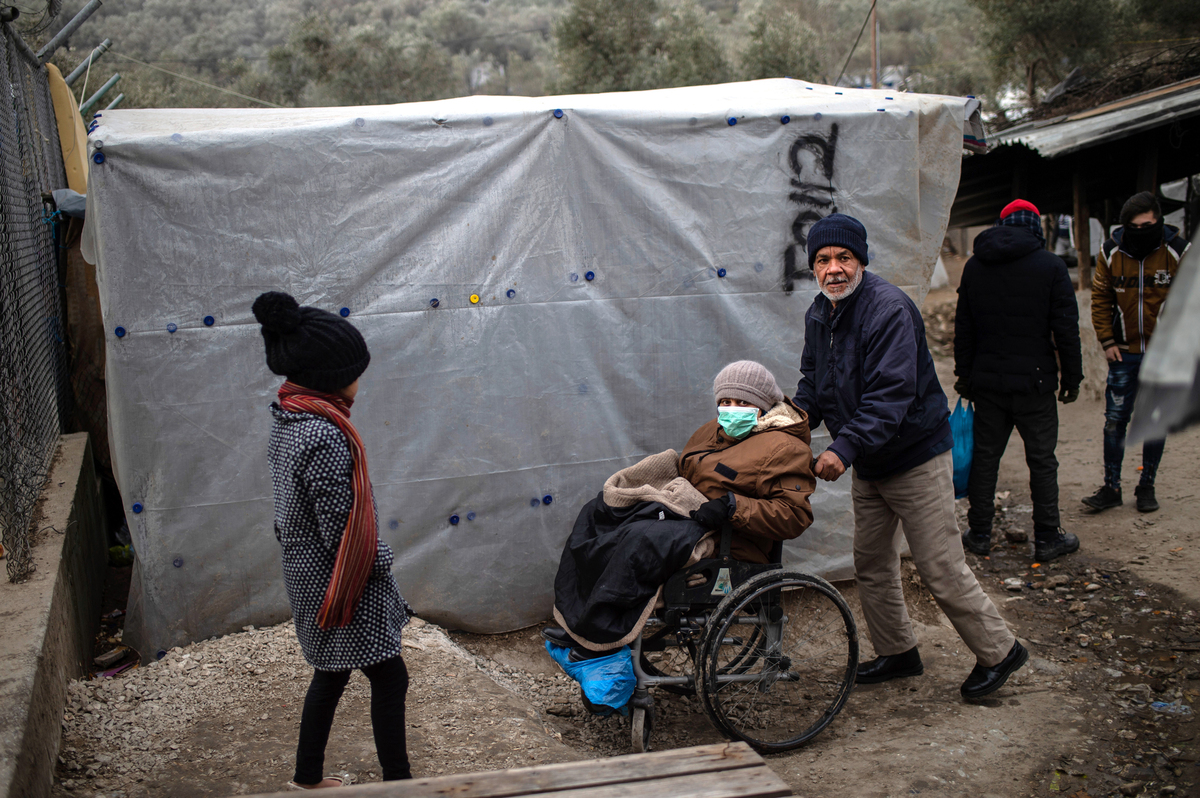 A scene from the Moria refugee camp on the island of Lesbos, Greece, in January.

Muhammad H. Zaman (@mhzaman) is a professor of biomedical engineering and international health at Boston University, and the author of Biography of Resistance: The Epic Battle Between People and Pathogens, to be published by Harper Wave in April.

The message about coronavirus to the public is loud and clear: If you feel sick, call your doctor. There is nothing wrong with the message. But not everyone has the luxury of calling a doctor.

In some of the places I have worked in the last few years — particularly in understanding barriers to healthcare in refugee camps in Pakistan, Uganda and Lebanon — the ability to call a doctor does not exist. When I recently contacted a friend who helps provide primary care to refugees at the Syrian-Lebanese border to ask about pandemic-related anxiety in the camp, he asked me a question in response: How do you wash your hands several times a day when there is no access to clean water in your entire camp?

The challenge of COVID-19 is testing countries, governments and their citizens in new and unprecedented ways. Schools have been closed from Italy to Japan, Iran to Ireland, and more recently in the U.S. Universities including Boston University, where I teach, are moving all classes to an online format. Federal and state governments are recommending a ban on large gatherings. Conferences are being postponed, and sports events are canceling at unprecedented rates to decrease the likelihood of disease spread.

But what happens if your home is in a confined refugee settlement?

The impact of armed conflict on health systems and infrastructure is well known. Hospitals are destroyed, medical personnel are either killed or forced to flee, supply chains for medical equipment and medicines are disrupted. This is in addition to increased injuries and trauma, as well as greater exposure to infectious agents and unhygienic environments.

People who are forced due to armed conflict or other reasons to flee their homes can end up living in cramped environments with little access to medical care. Infections and superbugs thrive in such environments, and patients typically can't obtain appropriate and quality antibiotics.

While there are no known cases yet of COVID-19 in refugee camps — which is likely due to a lack of testing — the disease is going to hit these communities hard.

Despite global attention to the challenges posed by the coronavirus and increasing calls to support low- and middle-income countries, refugees are largely ignored and left to their own devices. A global approach is needed to avoid more tragic loss of life.

The global health security agenda too often focuses on the security of the rich and the powerful — not those who have no political agency. Because refugees are not citizens of countries that host them, little has been discussed about how nearly 30 million people should prepare for this outbreak — or the next. It is not even clear what, if any, resources are available to refugees to seek proper information, let alone proper care.

Beyond the obvious ethical and humanitarian dimensions in providing information and care for those who have been forcibly displaced from their homes, there is another obvious reason to support refugees in managing the COVID-19 pandemic.

Refugee settlements tend to have a high population density, and are often close-knit communities. As a result, any outbreak can spread quickly. With an increase in the number of refugees who seek work in urban areas and routinely travel back and forth between camps and cities, the problem could quickly escalate.

Underlying health issues stemming from poor nutrition or lack of vaccination can make refugees even more vulnerable. Secondary infections, including those from drug-resistant pathogens, are also common in these environments. An outbreak would also increase the likelihood of infection among staff at clinics, schools and humanitarian agencies who work in refugee settlements. The workers and staff could in turn infect others in their own communities.

The obvious and sustainable solution is to improve the health system in these camps so refugees can receive equitable care. Given the urgency of the situation, this is unlikely to happen overnight.

What can happen — and will mitigate the risk — is a three-pronged approach.

First, there must be a recognition that refugees are highly vulnerable to this outbreak. International public health agencies, in partnership with local health authorities, must ensure that accurate information and practical advice is provided to these communities in a clear, easy to understand and transparent manner. This would require efforts by countries and international agencies in bringing together experts in infectious diseases and refugee health to come up with a clear plan to tackle a possible (and likely) outbreak.

Second, national and international funding that is being mobilized to fight the coronavirus should include resources for refugees and forcibly displaced communities. This can come in several forms, including the creation of new, temporary health facilities near refugee camps, setting up screening centers and mobilizing additional health workers. Refugees are unlikely to have disposable income and many would therefore not be able to travel or pay for out-of-pocket expenses for testing.

Refugees also can face high levels of discrimination and xenophobia in some host countries — another reason why testing and care should be given close to the camps. It should not require extensive travel to areas where refugees are reluctant to go, due to fear of physical and emotional harm.

Finally, and perhaps most importantly, the United Nations, World Health Organization, regional agencies and local health authorities must build trust with refugee communities at this time. Research shows that trust plays a central role in how refugees (and other vulnerable groups) seek health care. To create trust, refugees need access to information and to knowledgeable care providers who speak their language and have a strong sense of empathy.

Top-down, heavy-handed approaches that involve heavily armed police or security agencies with a history of using disproportionate force are unlikely to work. Instead, partnerships that include refugee community leaders and community representatives are going to be far more effective in managing the crisis.

We are in uncharted territory, and it remains to be seen how the virus is going to spread. However, it is clear that taking care of vulnerable and marginalized groups will not only help manage the COVID-19 crisis better by reducing the degree of global spread and protecting those at risk; it may also pave the way for improving the health and well-being of refugees well beyond this crisis.