Accessibility links
Defining Coronavirus Symptoms: From Mild To Moderate To Severe : Goats and Soda These designations are often used to describe a patient's COVID-19 symptoms. At this stage of the outbreak, there aren't standard definitions, but there are preliminary guidelines. 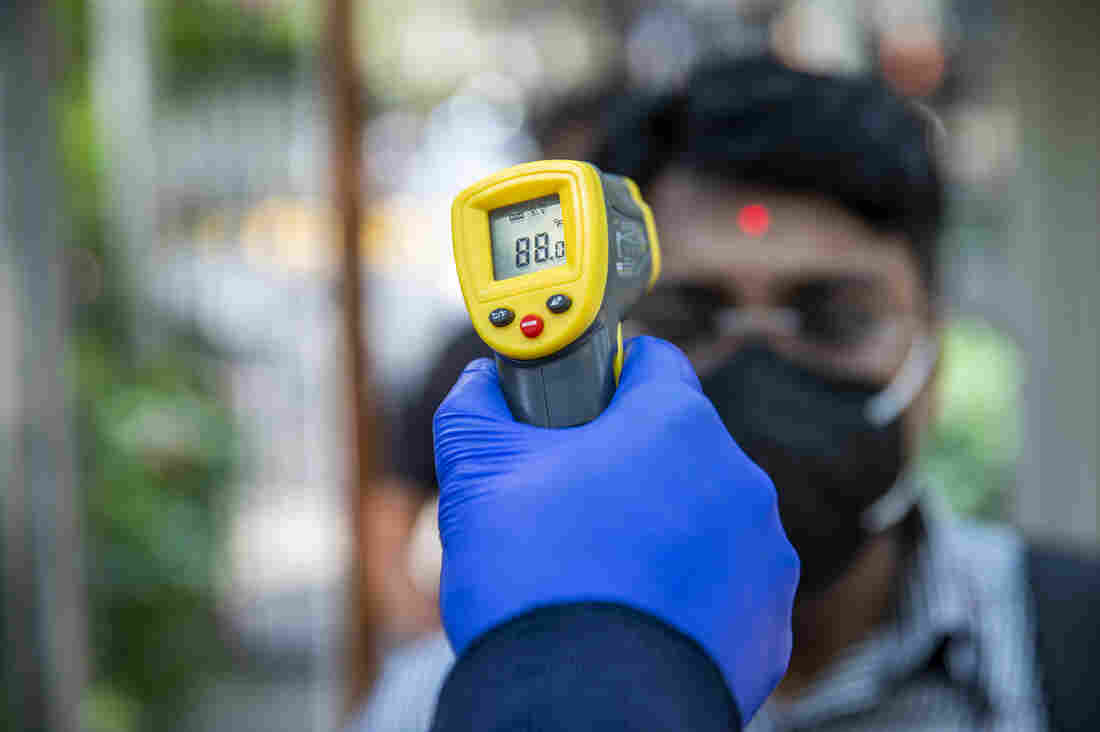 An office worker is screened with an infrared thermometer as he enters a building in New Delhi, India. Prashanth Vishwanathan/Bloomberg via Getty Images hide caption 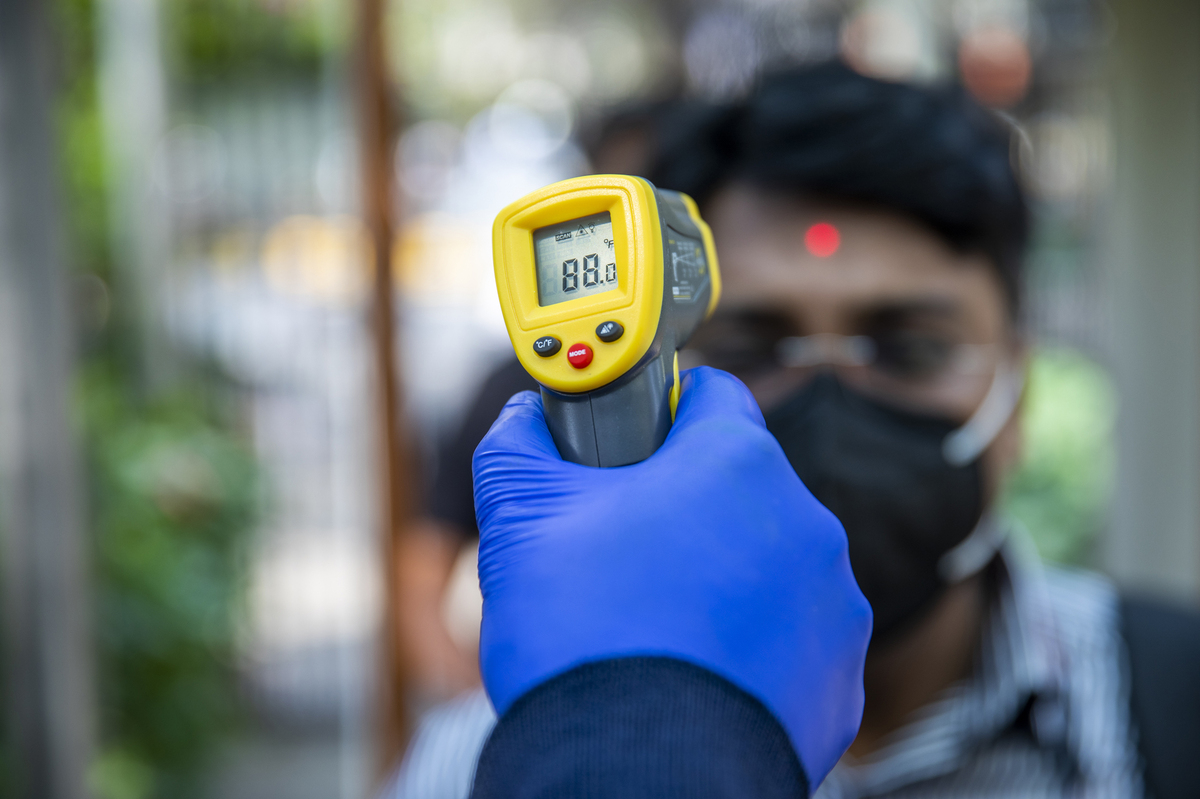 An office worker is screened with an infrared thermometer as he enters a building in New Delhi, India.

These are some of the adjectives being used to describe the symptoms displayed by patients with COVID-19. Vice President Pence used them in his remarks to the nation last week:

Clinical definitions of these terms can take years to be developed and finalized, says Sandro Galea, an epidemiologist and dean of the School of Public Health at Boston University.

Steps are being taken. The World Health Organization updated guidance for doctors treating COVID-19 earlier this week and provided explanations to categorize most of the cases doctors will see.

According to the new report, "while most people with COVID-19 develop mild or uncomplicated illness, approximately 14% develop severe disease requiring hospitalization and oxygen support and 5% require admission to an intensive care unit to try to prevent the most severe complications including septic shock — a significant drop in blood pressure that can lead to stroke, heart or respiratory failure, failure of other organs or death."

Theresa Madaline, hospital epidemiologist at the Montefiore Health System in New York City, notes that in some patients, symptoms can progress to severe in a few hours — or over several days.

But at this time, the common terms you'll hear are "mild" "moderate" and "severe." We asked doctors on the front lines to help us explain those terms in light of the new WHO guidance.

In 80% of known cases, COVID-19 causes mild to moderate illness, according to a report of a joint World Health Organization-China mission of 25 infectious disease experts held in China late last month.

At a press conference on March 9, Maria Van Kerkhove, technical lead of the WHO Health Emergencies Program, said: "[A] mild infection starts normally with a fever, although it may take a couple of days to get a fever. You will have some respiratory symptoms; you have some aches and pains. You'll have a dry cough. This is what the majority of individuals will have."

It is "nothing that will make you feel like you need to run to a hospital," says Dr. Amesh Adalja, a senior scholar at the Johns Hopkins Center for Health Security.

A mild case of COVID-19 in and of itself is not dangerous. But in some cases — more commonly in older people and in people with underlying health issues — a mild case can progress to a moderate case that could require some supportive care such as fluids for dehydration, typically in an emergency room or urgent care center, especially if hospitals are overwhelmed by the most acute cases.

Symptoms of being moderately ill with COVID-19 include coughing, fever above 100.4, chills and a feeling that you don't want to or can't get out of bed, says Adalja.

With shortness, of breath, that "is a wide spectrum and whether we consider treatment will be based on how short of breath they are, their age and other health conditions," says Galea."\

"Is it shortness of breath after climbing a flight of stairs or when there's no activity — for example, when you're just sitting in a chair?" says Dr. Theresa Madaline, hospital epidemiologist at the Montefiore Health System in New York City.

In either case, there's cause for concern with a confirmed or suspected COVID-19 case. "Shortness of breath [with this virus] is a symptom to always check with a health care provider. Period," says Dr. Kenneth E. Lyn-Kew, a pulmonologist in the Section of Critical Care Medicine and Department of Medicine at National Jewish Health in Denver.

That's because shortness of breath can be caused by low oxygen levels in the blood. Blood carries oxygen to organs and tissues, and low levels can lead to organ shutdown or even death.

For patients with moderate symptoms, hospitalization is unlikely unless they are having difficulty drawing a breath or are dehydrated. Signs of dehydration can include increased thirst, dry mouth, decreased urine output, yellow urine, dry skin, a headache and dizziness.

During the March 9 press conference, Dr. Van Kerkhove said that "while pneumonia can often resolve on its own, especially in younger people, in older people and in those with underlying health conditions, pneumonia can be life-threatening or require hospitalization, especially if their immune system is weak."

The concern, says Galea, is that in severe cases, without giving a patient supplemental oxygen or if needed a respirator to aid breathing, a patient's organs can shut down and the patient can die, says Galea. People with pneumonia can also get secondary bacterial infections, which can be life-threatening and require treatment with intravenous antibiotics.

A different problem can occur if the disease progresses. The virus can enter lung cells and start replicating, killing the cells. The immune system may take action to fight the virus, creating inflammation, destroying lung tissue and sometimes resulting in a more severe form of pneumonia.

This [immune system] response can impair the ability to get oxygen into the blood. Without enough oxygen, inflammation can become more severe and result in organ failure.

What to tell your doctor about symptoms

"Keep in mind that mild, moderate and severe are the inelegant terms we have right now," says Dr. Shira Doron, hospital epidemiologist at Tufts Medical Center in Boston. "Use symptoms rather than adjectives when you speak to a health care provider" and then they can determine whether you need to consider treatment.