Accessibility links
Coronavirus Spurs Demand For Face Masks — But They're Surprisingly Hard To make : Goats and Soda China makes millions of masks. But ramping up production is tricky. "Making masks is not as easy as you imagine," a pharmaceutical executive in China says.

COVID-19 Has Caused A Shortage Of Face Masks. But They're Surprisingly Hard To Make

COVID-19 Has Caused A Shortage Of Face Masks. But They're Surprisingly Hard To Make 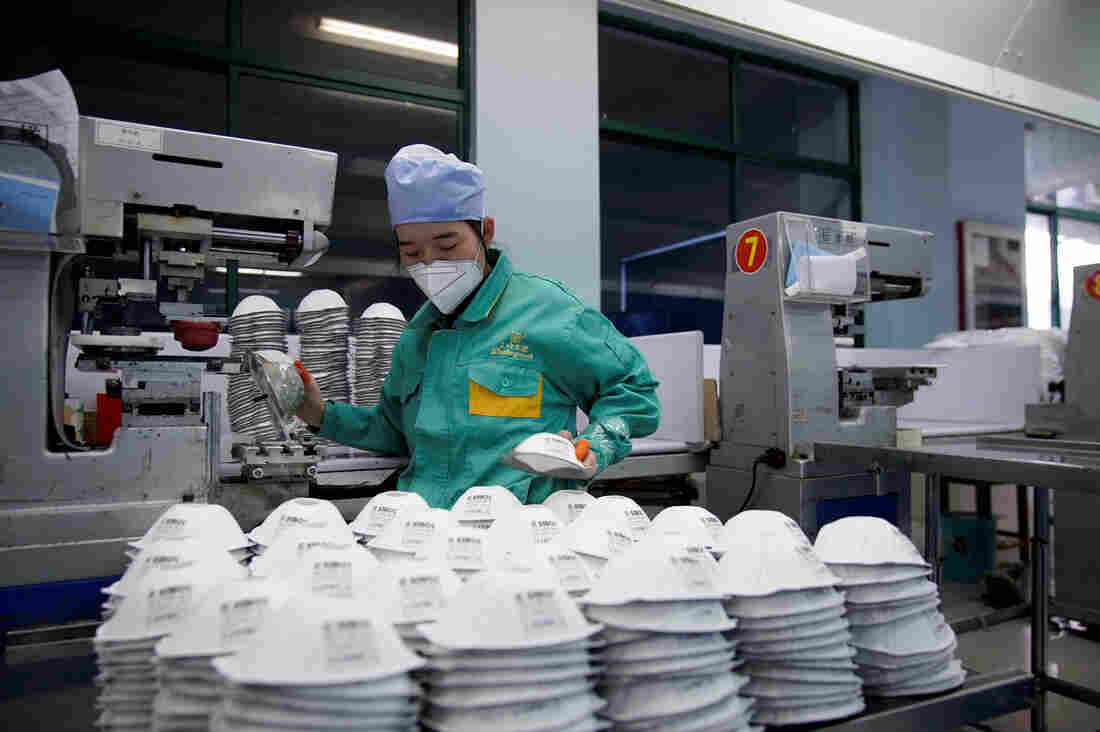 A production line for the manufacture of masks at a factory in Shanghai, China. Aly Song/Reuters hide caption 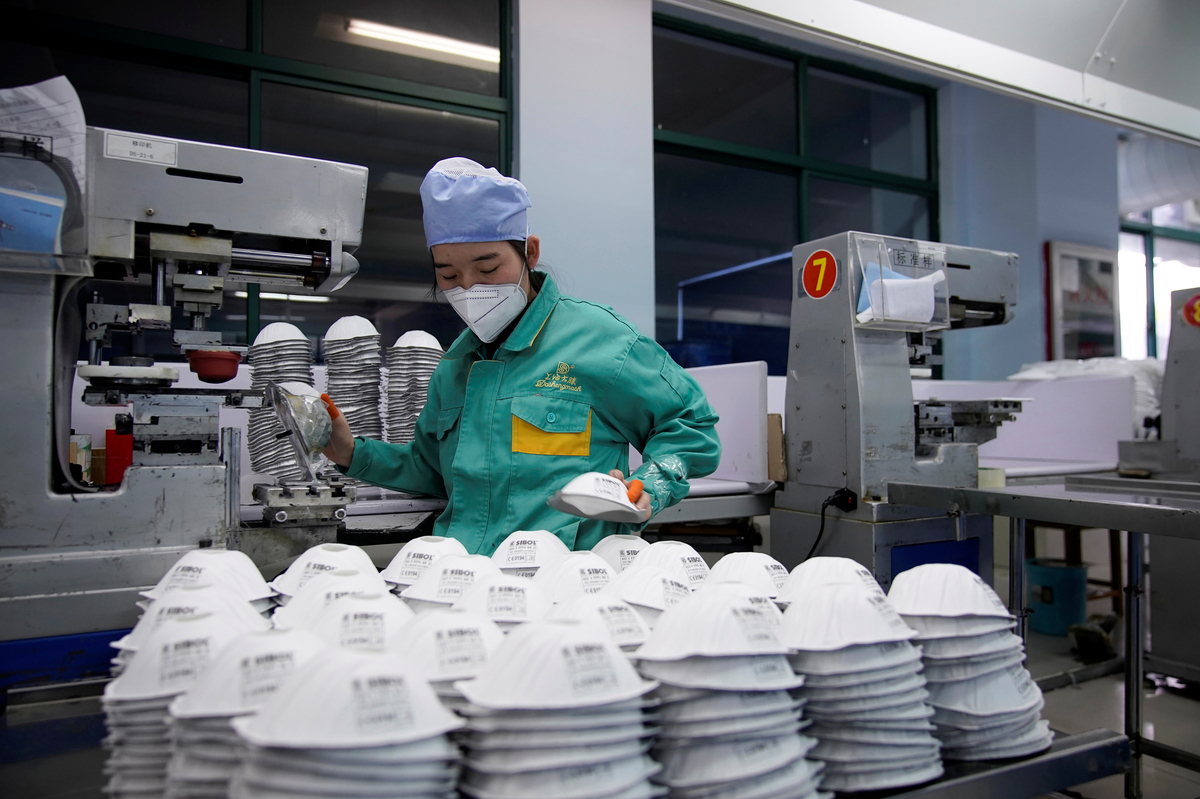 A production line for the manufacture of masks at a factory in Shanghai, China.

China now makes 200 million face masks a day — more than twenty times the amount it made at the start of February. The leap has been spurred by the outbreak of a new coronavirus. The masks include the lightweight ones that people like to wear in the hope of protection against coronavirus as well as the heavy-duty N95 masks used by health-care workers.

But that's still not nearly enough to meet local demands as well as global orders. So a scramble is now underway in China.

Mask factories are "running at 110 percent capacity," say authorities. And factories that once made shoes, iPhones and cars are being retooled to make masks. Machines that once churned out fibrous materials destined for diapers and sanitary pads are now producing materials for masks.

"Making masks is not as easy as you imagine. We have to make the ear loops and the metal strip, the packaging. There is a pretty big system involved," Guan Xunze, chairman of pharmaceutical group Shengjingtong in northeastern China, told NPR by phone. He's referring to the metal strip that lets you bend the mask around the nose bridge.

Shengjingtong is one of the thousands of companies transitioning to become part of China's mask-making "army," As the government calls it. Aided by generous government subsidies, Guan filled a sterile space in a pharmaceuticals factory he already owned with second-hand machinery to assemble the masks. Within 11 days, they were making more than 10,000 N95 masks a day. Now, it's 200,000.

Currently, of the 200 million masks China makes a day, only 600,000 are N95 standard masks, used by medical personnel, according to the National Development and Reform Commission, a state planning body. Provincial regulators have granted dozens of new licenses to open additional factories capable of producing top-grade masks, including those that meet the standards for use by health-care professionals.

But this ambitious effort has run into a bottleneck.

Both the masks made for medical personnel and for consumer purchase require a once-obscure material called melt-blown fabric. It's an extremely fine mesh of synthetic polymer fibers that forms the critical inner filtration layer of a mask, allowing the wearer to breath while reducing the inflow of possible infectious particles.

"We're talking about fibers where one filament has a diameter of less than one micron, so we are in the nano area," said Markus Müller, the sales director at German company Reicofil, a major provider of melt-blown machine lines.

And there's now a global shortage of melt-blown fabric due to the increased demand for masks — and the difficulty in producing this material.

Costing upward of 3.8 million euros ($4.23 million) apiece, the machine that creates this fabric melts down plastic material and blows it out in strands, like cotton candy, into flat sheets of melt-blown fabric for face masks and other filtration products. A similar line of machines can create a related kind of fabric, called spun-bond fabric, also used in face masks and in medical protection suits worn by health-care workers.

Reicofil's Müller says he gets more than four dozen requests a day, mainly from China, to buy melt-blown fabric and production lines but has to turn nearly all of them away; making a single machine line takes at least five to six months.

Chinese firms make nearly three million tons of nonwoven fabric a year, according to the China Nonwoven and Industrial Textiles Association, a state industry body. Less than 1% of that is melt-blown fabric.

Timothy Robson, a business development manager at Hills, Inc. in Florida, is skeptical of the quality of such production lines, which must meet precise standards to produce the kind of masks worn by medical staff. Hills Inc. is one of the handful of companies in the world that can make the hand-drilled die tips for the machines. The melted plastic is blown out through the tips.

"[These machines] are not like a toaster. It's not something you buy and then you plug in. It's an industrial process," Robson told NPR by phone. "China can be all over the place. Sometimes you think you're in a Western factory. Others are kind of like a dirt floor sort of shanty trying to pass their stuff off as good as the other guys. And maybe it is."

Chinese engineering firms say they're struggling. "We need about six months to make the machines, and it takes another month to assemble them," said Leo Liu, a sales director at Haigong Machinery, a Chinese company that assembles the machine parts for melt-blown lines imported from the US, Germany and Japan. "Everyone is considering mask manufacturing, but they don't understand the process. Once they learn the cost of these machines, they give up."

Yanshan Petrochemical says it will need only 16 days, not six months, to assemble the ten new melt blown production lines.

From the outset of the virus outbreak, face masks have been desperately in short supply, so desperate that provincial governments have seized shipments of masks destined for other localities in China.

Other local governments have called on companies in their jurisdictions to switch over into mask production.

"After being approached by Shanghai officials about converting our factory lines to making medical supplies," said Li Laibin, the president of a private bedding company, to a Chinese news outlet, "we transformed ten of our lines used to manufacturing duvet covers to making protective gowns." After using less than a handful of days to remodel its production process, Li's company dove head first into making protective gowns, reporting a daily output of around 2,000.

An underwear factory in the northwestern city of Changchun spent slightly longer — eight days — fixing frozen pipes and finding delayed shipments of raw materials to get a daily production line for 3,000 masks started, after it became licensed to operate in early February. "After the outbreak, our company set about adjusting production lines as soon as possible," a factory manager explained to reporters from the Communist party' flagship paper.

But a bottleneck of meltblown production lines means a severe shortfall of melt-blown fabric itself, sending prices soaring.

"Before the outbreak, the going price for one ton of melt-blown fabric in China was under 6,000 dollars a ton. But now, it's about 60,000 dollars," said a sales staff surnamed Guo at Xuzhong Guohong, a major supplier of melt-blown based in Hubei province, the center of virus outbreak in China. "The [shortage] issue is quite severe. Otherwise, why would the price be jacked up so high?

Guo says he still gets most orders from China, but demand from South Korea and Japan is picking up as coronavirus cases in these two countries rise.

Guan Xunze is lucky. The pharmaceutical chairman now making masks does not deal directly with fluctuating raw commodity prices because they're supplied to him by local authorities.

"Our supplies of melt-blown fabric and nonwoven fabric are all coordinated by the local and provincial governments. Originally, we had about 30 employees from our company start to make masks...the local government assigned me 180 more."

Even then Guan says it is "very hard" to make a profit.