Accessibility links
Global Deaths From Coronavirus Surpass 6,000 : Goats and Soda With the number of cases worldwide from the novel coronavirus surpassing 150,000 and some 6,000 deaths, governments continue their struggle to contain the pandemic. 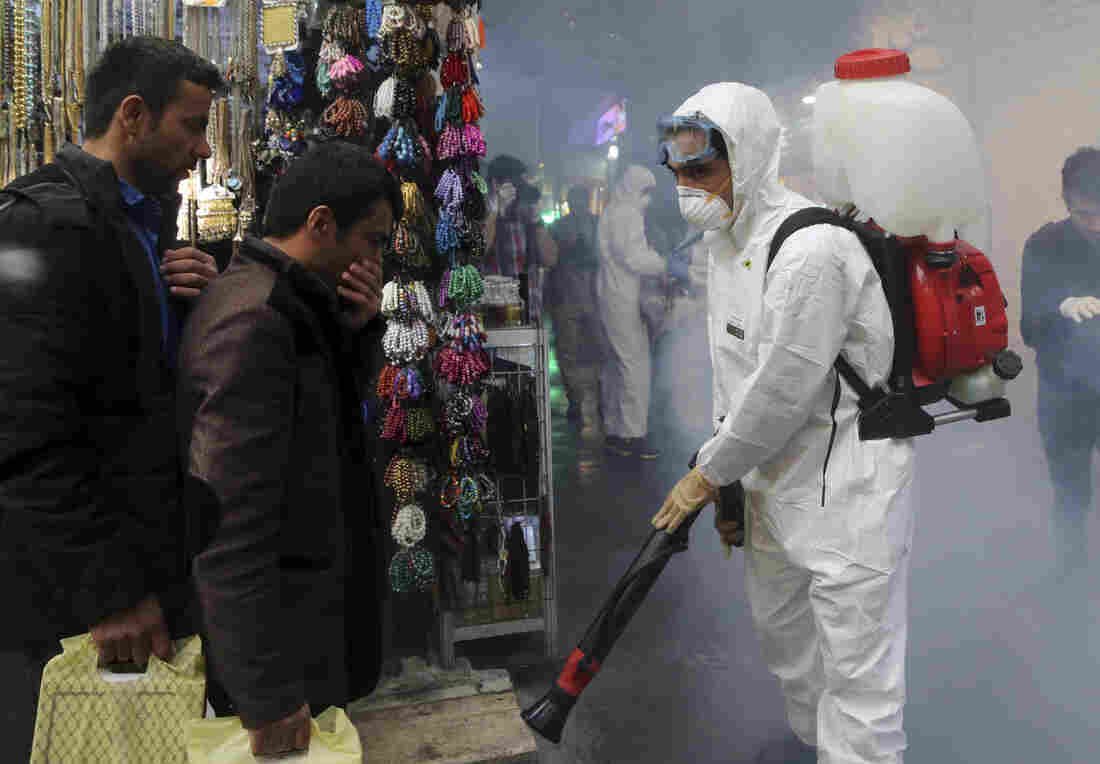 Firefighter teams with protective suits disinfect the Tajrish Bazaar as a precaution against the coronavirus in Tehran, Iran, on March 6. Fatemeh Bahrami/Anadolu Agency via Getty Images hide caption 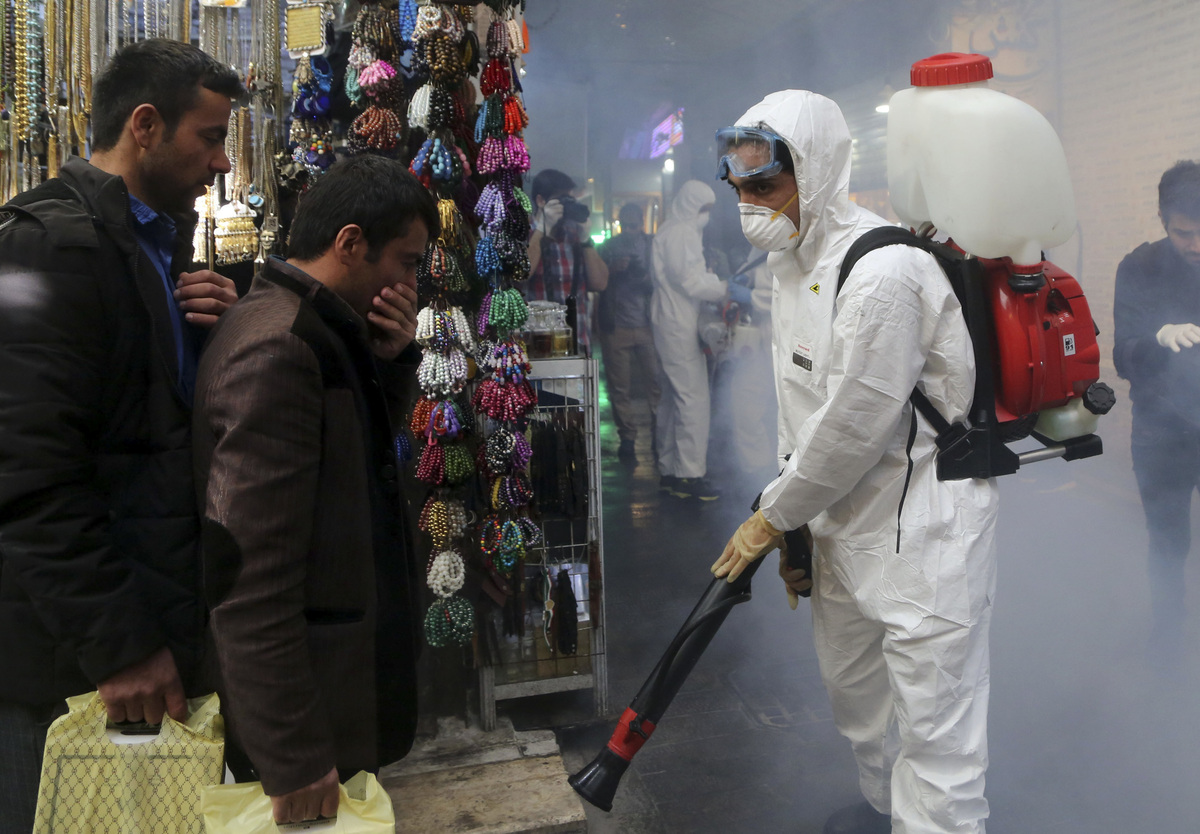 Firefighter teams with protective suits disinfect the Tajrish Bazaar as a precaution against the coronavirus in Tehran, Iran, on March 6.

With the number of cases worldwide of the novel coronavirus surpassing 150,000, with some 6,000 deaths, governments across the globe continue their struggle to contain the pandemic. Their hope is to limit the number of new infections, while treating those individuals suffering from COVID-19 and isolating others whose symptoms are not as severe but who might spread the disease.

Here's a snapshot by region of what is happening as of midday Monday:

The European Union is proposing that its members restrict nonessential travel to the EU for 30 days.

Ursula von der Leyen, the president of the European Commission, said there would be exemptions for long-term EU residents, family members of EU nationals, diplomats and people actively working to address the crisis, such as doctors and researchers.

The proposal also would exempt people transporting goods, with "fast lanes" at borders "giving priority to essential transport." EU leaders are expected to discuss the proposal Tuesday, according to Reuters.

The head of the World Health Organization, Tedros Adhanom Ghebreyesus, said over the weekend that Europe had become the new epicenter of the pandemic after it peaked earlier in Asia.

"More cases are now being reported [in Europe] every day than were reported in China at the height of its epidemic," Tedros said at a news conference at the WHO's Geneva headquarters.

Officials in Italy have reported some 3,600 new cases and 368 deaths in the past 24 hours, bringing the total number of infections there to nearly 25,000 and some 1,800 deaths. Italy is second in the number of reported infections and deaths only to China, where the epidemic was first identified in December.

Italian officials have expressed concern that the surge in infections has pushed the country's health system to the saturation point, according to NPR's Sylvia Poggioli. Health authorities say there is a severe lack of intensive care unit beds, ventilators and protective masks to treat the huge influx.

"It's not a wave — it's a tsunami," Dr. Robert Rona, who is in charge of intensive care at Monza hospital outside Milan, told The Associated Press.

The disease first appeared in Lombardy, the region that is home to Milan, a metropolis of 3 million people that is Italy's economic powerhouse. It started in a cluster of small-to-medium-size towns in the region, and Poggioli reports that "everything is being done to prevent a surge in cases in Milan."

Spain, where the government formally declared a state of emergency over the weekend, ordered a lockdown — requiring people to stay home to foster social distancing and for all nonessential shops to close, along with restaurants, bars, cafes and movie theaters.

In Spain, the total number of confirmed infections now exceeds 7,800 cases with 282 deaths.

Following a lengthy briefing on Saturday, Spanish Prime Minister Pedro Sánchez, whose wife has tested positive for the virus, said "extraordinary" decisions were required to combat the disease.

"From now, we enter a new phase," he said. "We won't hesitate in doing what we need [to do] to beat the virus."

"During the state of emergency, people will only be allowed out on to public streets for the following reasons: to buy food, basic or pharmaceutical items; to attend medical centers; to go to and from work; to look after children, older people or those with disabilities or who are especially vulnerable; and to attend financial or insurance offices on force majeure grounds," Sánchez said, according to The Guardian newspaper.

In a gesture of gratitude for doctors, nurses and other medical workers who work in Spain's national health system, people went to their balconies all over the country at 10 p.m. local time to applaud in unison.

In France, municipal elections went ahead as planned on Sunday under what officials said were tight sanitary restrictions, including "safe spacing" of voters as they queued and providing hand sanitizer. There have been nearly 5,500 total confirmed cases in France, with 127 deaths from COVID-19. Despite assurances that the polling was safe, the Interior Ministry on Sunday reported turnout was just 18.3%, down 5% from elections six years ago.

France has already ordered a lockdown similar to the one Italy and Spain have imposed.

In the United Kingdom, where nearly 1,400 cases have been confirmed so far with 35 deaths from the coronavirus disease, no lockdown has been ordered.

However, the government is expected to lay out emergency measures this week, including requiring people 70 years and older to self-isolate for as long as four months.

Last week, the government of Prime Minister Boris Johnson signaled that it might be considering a different approach to the rest of the world — in essence, allowing a large percentage of the population to become infected, creating a "herd immunity" that would eventually stamp out the epidemic.

But public backlash to that suggestion, which would result in tens of millions of Britons becoming infected with the virus, forced the government to backtrack.

"We will do the right thing at the right time, based on the best available science," Health Secretary Matt Hancock wrote in an opinion piece that appeared in The Telegraph over the weekend. "Herd immunity is not our goal or policy, it's a scientific concept." 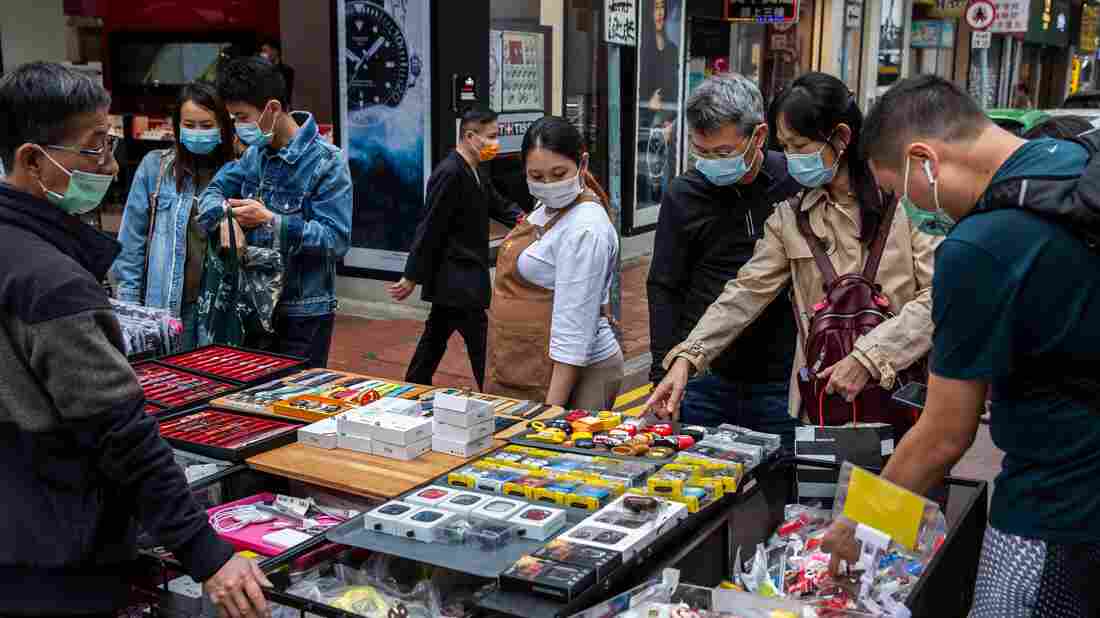 People wearing face masks as a precautionary measure against the novel coronavirus look at electronic accessories for sale from a street vendor in the Causeway Bay district of Hong Kong on Sunday. Isaac Lawrence/AFP via Getty Images hide caption 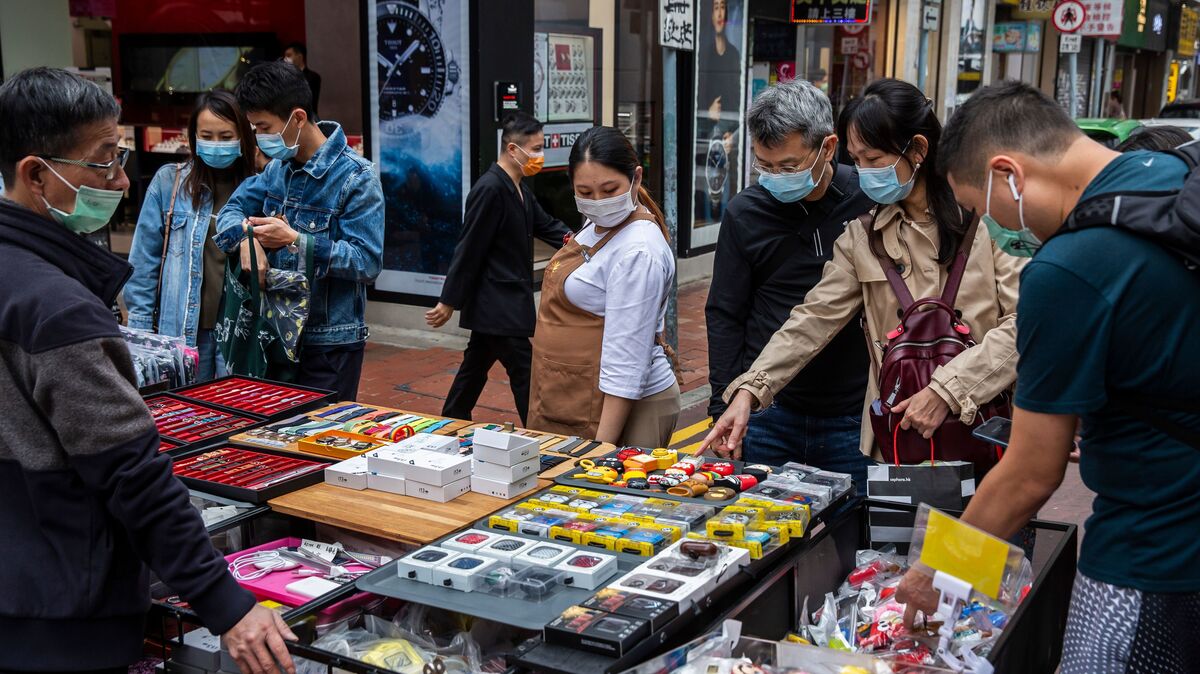 People wearing face masks as a precautionary measure against the novel coronavirus look at electronic accessories for sale from a street vendor in the Causeway Bay district of Hong Kong on Sunday.

New cases in China, where the epidemic began, have been decreasing steadily in recent weeks, with just 27 new cases reported in the WHO's latest situation report, which is updated every 24 hours. It is a long way from the peak of the crisis in China about a month ago, when Beijing reported more than 14,000 new infections in a single day. A total of about 81,000 cases have been reported there since December.

In recent days, the country has begun shifting its efforts from the internal spread of the virus to keeping new cases from abroad from entering.

The number of new cases is also in decline in South Korea and Japan — two countries that were hard hit as the infection spilled over from China in the early days of the epidemic. Seoul reported 76 new cases and Japan 64, according to WHO.

Although government officials have refrained from critiquing the rest of the world's response to the pandemic, some hospital officials haven't been as reticent.

Singapore Wins Praise For Its COVID-19 Strategy. The U.S. Does Not

Zhang Wenhong, director of the infectious diseases department at Shanghai Huashan Hospital affiliated with Fudan University, wrote on the hospital's social media account: "We had thought the world would synchronise controls with those taken in China – in the way that Singapore, Japan and South Korea have done."

"But Europe has become the new epicentre and brought us huge uncertainties," he wrote, according to the South China Morning Post.

In Iran, where the epidemic has infected nearly 15,000 people by official accounts, a 78-year-old member of the clerical body that chooses the country's supreme leader has reportedly died from COVID-19. The virus has killed some 800 people in Iran, but suspicions about the government's assessment of the epidemic within its borders has led some to question the official statistics as understated.

A number of cases have been reported in a dozen other countries in the eastern Mediterranean.

In Canada, Prime Minister Justin Trudeau announced that the country will restrict entry for travelers who are not Canadian citizens or permanent residents.

He said there would be exemptions for several groups, including U.S. citizens, airplane crews, diplomats, and the immediate family members of Canadian citizens.

"I know that these measures are far-reaching. They are exceptional circumstances calling for exceptional measures," he said.

Trudeau and his family say they are self-isolating after his wife, Sophie Grégoire Trudeau, tested positive for the coronavirus. The country has had more than 400 cases, with four deaths.

Last week, the press secretary to Brazilian President Jair Bolsanaro tested positive for the virus after having met with President Trump at the Mar-a-Lago resort in Florida. About 200 cases have been reported in Brazil, but no deaths.

The continent of Africa, which faced the brunt of the 2014 Ebola outbreak, appears thus far to have been largely spared from COVID-19. According to Johns Hopkins University's Center for Systems Science and Engineering, South Africa has had 62 cases, but no deaths, while Algeria has had 54 confirmed cases and four deaths; Senegal has had 24 cases and no deaths.

An earlier version of this story erroneously said that Sweden, Norway, Denmark, Austria, Belgium and Greece have each had scores of coronavirus deaths. As of 9:11 p.m. ET on March 16, none of those countries has had more than six deaths. The earlier version also significantly overstated the number of coronavirus deaths in 11 other countries. The errors occurred due to NPR's misinterpretation of a World Health Organization chart. The incorrect numbers have been replaced with the most recent death counts reported on the coronavirus dashboard maintained by Johns Hopkins University's Center for Systems Science and Engineering.