Accessibility links
U.K. Steps Up Coronavirus Prevention, But Its Hospitals Have Already Been Strained : Goats and Soda The virus pandemic comes at a vulnerable time for the Britain's overburdened public health care system. 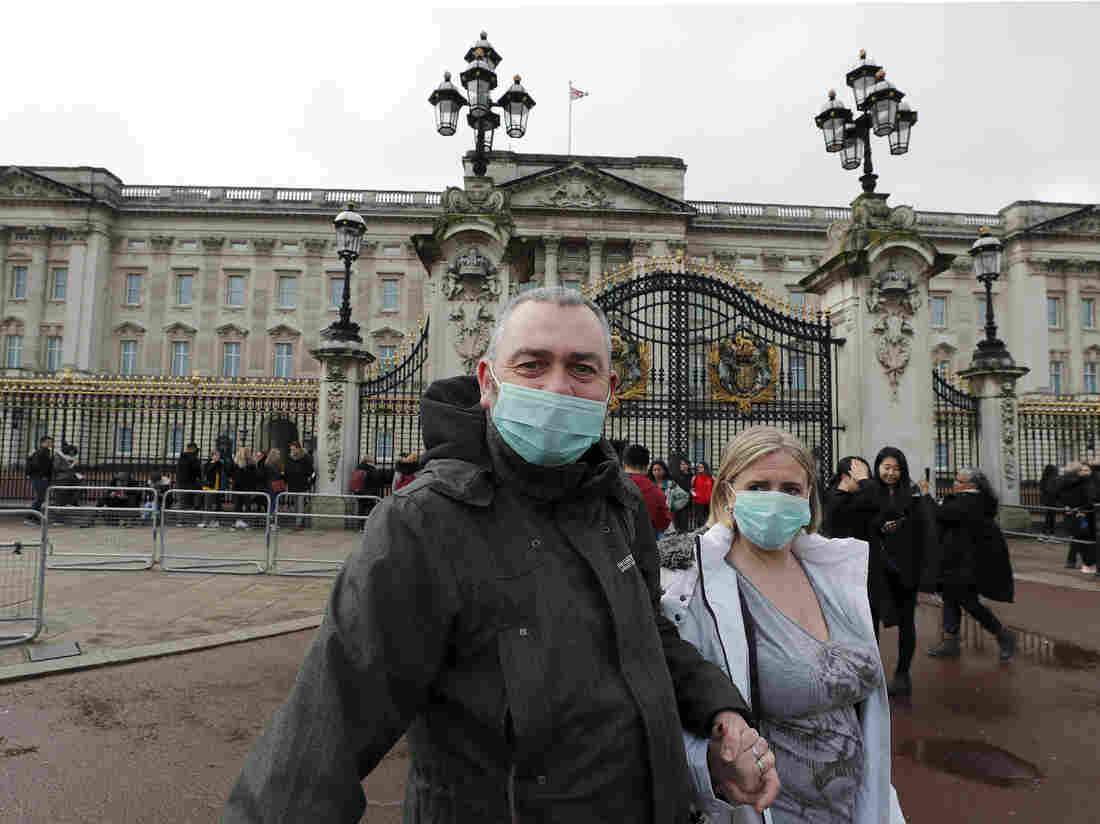 A couple wear face masks as they visit Buckingham Palace in London on Saturday. After criticism for responding slowly, the United Kingdom has urged the public to avoid unnecessary contact. Frank Augstein/AP hide caption 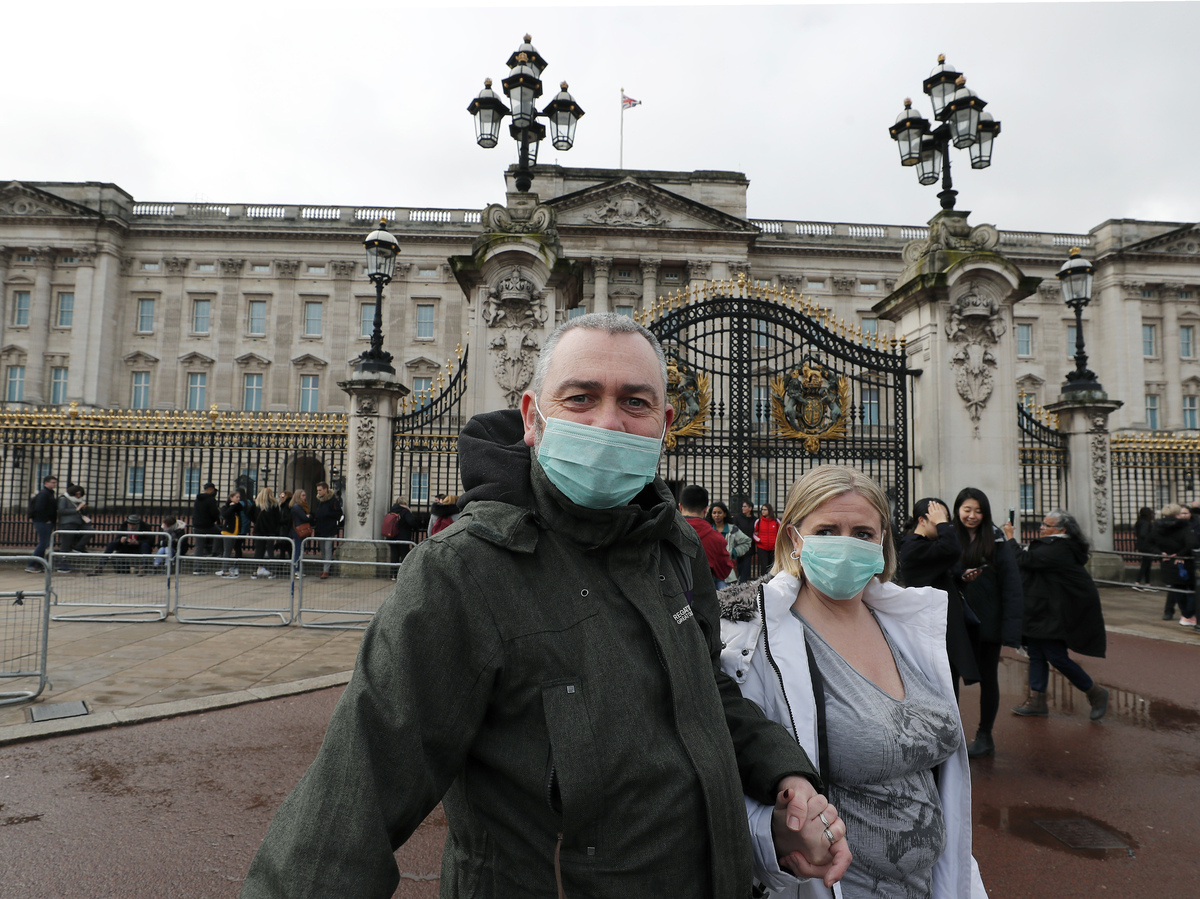 A couple wear face masks as they visit Buckingham Palace in London on Saturday. After criticism for responding slowly, the United Kingdom has urged the public to avoid unnecessary contact.

The United Kingdom's government is urging the public to work from home and avoid pubs, restaurants and theaters to slow the spread of the coronavirus as the death toll hit 67, with 1,950 confirmed cases. But, unlike some other European countries, including Ireland, the U.K. will keep schools open for now.

In a news conference Monday, Prime Minister Boris Johnson told people to avoid unnecessary social contact and travel and to not visit nursing homes. He also suggested that by the weekend, he will call for those older 70 and those with the most serious health conditions to stay at home for 12 weeks.

"It now looks as though we are approaching the fast growth part of the upward curve, and without drastic action, cases could double every five or six days," Johnson said.

It now looks as though we are approaching the fast growth part of the upward curve, and without drastic action, cases could double every five or six days.

Johnson said he was not shutting schools, in part because it would require parents, including National Health Service staff, to stay home. On Tuesday, the Foreign Office advised against nonessential international travel.

The government's strategy is to try to avoid a spike in cases that could easily inundate the NHS.

The coronavirus pandemic comes at a vulnerable time for the country's NHS. A decade of crippling funding cuts has left tens of thousands of vacancies and has led to record emergency room wait times. Doctors worry about whether the system can hold up.

"I see, when I do shifts on the front line, the real impacts of this shortfall in resources," says Rosena Allin-Khan, an emergency room doctor in south London as well as a member of Parliament in the main opposition Labour Party. "We don't have enough nurses; we have people waiting far too long for operations."

Allin-Khan says she thinks the country's health care system could be heading for a reckoning.

Patients are also concerned about the system's capacity. Monika Lakomy-Diep, an accountant in London, struggled last week to get a doctor to treat her daughter's allergies.

"The NHS is already stretched," she says, standing outside St. Thomas' Hospital across the River Thames from Big Ben. "Getting a simple GP appointment is a miracle."

The NHS is an institution in this country. The government created it in 1948, following the end of World War II, as part of a series of reforms to give people cradle-to-grave support. Funded by taxpayers, it provides everything from annual physicals to cancer surgery at no cost to users.

For most of its existence, the health system received annual funding increases of about 4% above the inflation rate. But after the global financial crisis, the U.K. government reduced those increases to about 1.5% annually over the past decade, says Siva Anandaciva, a chief analyst at the King's Fund, a health care think tank.

The U.K.'s Conservative prime minister said last week that he hopes to push the peak of COVID-19 cases into the late spring to avoid swamping the system.

"If we delay the peak even by a few weeks, then our NHS will be in a stronger state as the weather improves and fewer people suffer from normal respiratory diseases," Johnson said. "More beds are available, and we'll have more time for medical research."

Ron Daniels, an NHS critical care doctor, says that if the government's strategy works, the NHS will be able to cope. But if it doesn't, Daniels says, the U.K. could come to resemble parts of Italy, where more than 2,100 people have died.

"If we're unable to change public behavior and we see a rapid spread," Daniels says, "then the NHS is very quickly going to find itself overwhelmed, as has happened in Lombardy," a northwestern Italian region that has been devastated by COVID-19.

In Britain's House of Commons last week, Ed Davey, an acting leader of another opposition party, the Liberal Democrats, confronted Johnson over the lack of health care funding.

"Does the prime minister not agree that the three Conservative governments since 2015 should have fixed the roof when the sun was shining?" said Davey.

Johnson responded that his administration has been addressing the problem: "There are 8,700 more nurses this year than last year, and we are recruiting another 50,000 more," Johnson answered.

Last week, the U.K.'s new Treasury chief, Rishi Sunak, vowed in his budget speech to provide the NHS with whatever resources it needs to fight the coronavirus, including a portion of a $6 billion COVID-19 emergency fund.

It's tough for many Britons to watch the NHS struggle because they love it so much. Anandaciva, of The King's Fund, says the service regularly tops public opinion polls on what makes people proud to be British.

"Something that is comprehensive, universal and free at the point of use, as a social construct," Anandaciva says, "I think speaks to something in the British identity about a sense of fairness, our sense of everyone being in it together."