Accessibility links
Lessons From Wuhan About Life In Coronavirus Lockdown : Goats and Soda In Wuhan, China, most of the millions of people on lockdown have not gotten sick from COVID-19. But worries and isolation can affect their mental health.

Life In Lockdown: From Shock To Panic To ... Acceptance

Life In Lockdown: From Shock To Panic To ... Acceptance 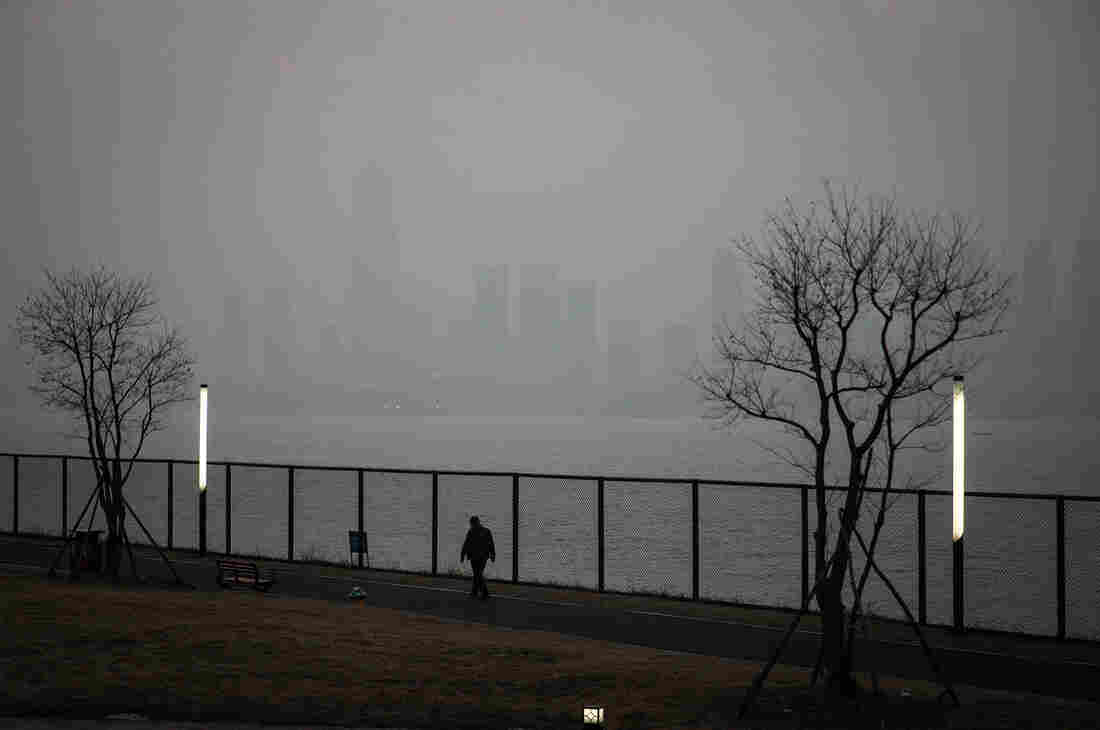 A man walks along the Yangtze River in Wuhan, the city in China where the novel coronavirus was first identified. Stringer for NPR hide caption 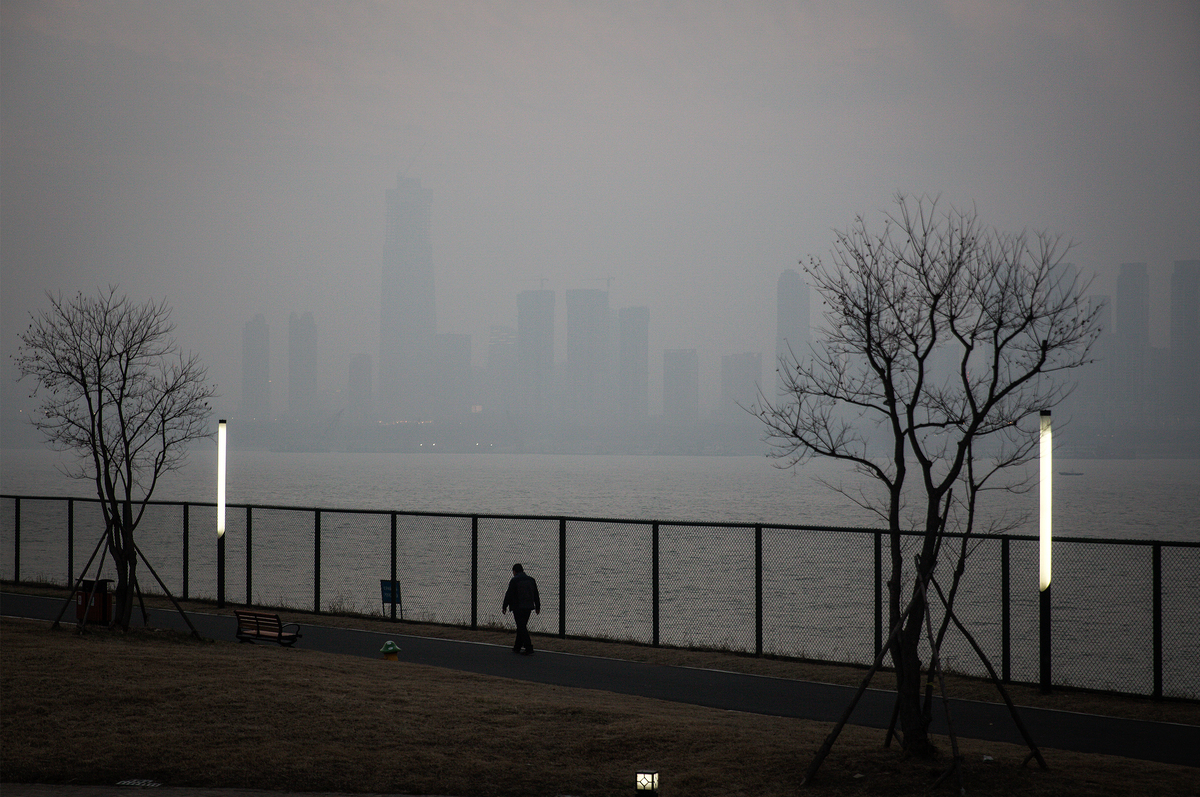 A man walks along the Yangtze River in Wuhan, the city in China where the novel coronavirus was first identified.

On Weibo, the Chinese version of Twitter, user 一只猫叫鱼Yu kept a public diary of her lockdown experience in Wuhan, China. On day 29, she described losing track of time. "I watch the days go by one after another," she wrote. "I don't know how long days like this are going to last."

Weibo user 窝躺100年 described the eerie quiet that prevailed in Wuhan in late February. "From the day of the lockdown, all the sirens on Wuhan ambulances went silent," she wrote. "On the one hand, there are not many cars on the road, so sirens aren't needed to get cars out of the way. On the other hand, it's probably for fear of frequent blaring of sirens causing panic among the public."

These are some of the emotions triggered by the unprecedented lockdown in Wuhan, the city where the novel coronavirus was first discovered. When the lockdown started on Jan. 23, residents were barred from leaving the city, and public transportation was canceled. In the following weeks, the lockdown tightened; authorities told residents that they couldn't leave their homes without permission — and even kept track of who was buying cold medicine at the pharmacy.

The mood in Wuhan evolved over the course of the lockdown — from shock and panic in the initial weeks, to acceptance, says Lin Yang, an epidemiologist at Hong Kong Polytechnic University. She came to Wuhan to visit her parents for the Lunar New Year holiday. As the weeks under lockdown stretched on, "we kind of tried to accept this as reality, and we need to change our lifestyle to adapt to this new life," she says.

Most people under quarantine in Wuhan haven't gotten sick from the disease. But they can experience high levels of anxiety, isolation and psychological distress, says Dr. Laura Hawryluck, associate professor of critical care medicine at the University of Toronto. She studied the mental health of people — mostly health care workers — who were quarantined in Toronto during SARS, a different coronavirus outbreak in 2003.

Her subjects expressed a lot of negative emotions. They said they were angry that they were given conflicting and incomplete information about precautions to take in quarantine — and frustrated by the lack of support from their public health officials and doctors' offices.

Those in quarantine were told to check themselves for fever twice a day — which more than half the respondents admitted they did not do. "Taking my temperature made my heart feel like it was going to pound out of my chest each time," one respondent noted.

Hawryluck's study found that those who had the hardest time coping weren't just worried about their own health — they had additional anxiety over money and the health of family members and friends.

According to Hawryluck's research, one of the biggest fears people have is putting their loved ones in danger.

That's the case for Xi Lu, a teaching assistant at King's College in London. He came home to Wuhan to spend the Lunar New Year with his parents. He's not sick but still worries that he may have been exposed to the virus.

"If I rush to go back [to the U.K.], and bring the virus to the people I care about — for example, my wife — that'd be horrible," he says, so he's OK with staying in Wuhan until the risk of infection has passed.

At the same time, he doesn't regret going home to see his parents, even in the middle of a dangerous epidemic. "I could never imagine if the worst thing happened, and I was not there," he says. So far, everyone in the house is healthy. He and his parents drink a daily nightcap together and have learned to give each other space so they don't get on each others' nerves.

There are efforts in Wuhan to help people deal with such concerns. Ye Xiaoping is a social worker in south China who runs the Jiahe Social Work Service Center in Nanning, Guangxi, and volunteers with an online support group, put together by medical professionals and social workers. The group has been providing advice to people in Wuhan about coronavirus — as well as emotional support.

The fear of the unknown looms, says Ye — even when it comes to seeking help. She says that people were anxious about seeking treatment in Wuhan's field hospitals because they didn't know what to expect. "People fear being infected, fear being cold, fear being hungry, fear going in, being neglected and dying there," Ye says.

The online support group helped calm such fears among prospective patients by sharing other people's experiences in the hospitals. Volunteers showed photos of what the facilities looked like inside, gave information about daily schedules and offered advice on what to bring.

Ye says knowing some basic information, like what the meals were like and what kind of beds were in the hospital rooms, made people less scared of going.

As the number of new cases in Wuhan has dropped, the field hospitals have closed. Workers in essential industries, such as public utilities and medical equipment, have started returning to work.

But the lockdown is still in effect. From his parents' house in Wuhan, Xi Lu is running a Facebook group called "Quarantine Wuhan." And it's not just for residents of the city. In recent days, people in other countries have been asking for advice on preparing for their own lockdowns.

He counsels people to try and maintain good sleep and a positive attitude — he works out daily on a treadmill or stair climber and posts videos of the birds singing outside his parents' home. And he reminds them that lockdown won't last forever.