Accessibility links
'A Socioeconomic Tsunami': How The World Is Dealing With Pandemic : Goats and Soda Developments on the ground in the past 24 hours come as the worldwide total of confirmed infections edged toward 200,000, with some 8,000 dead from COVID-19. 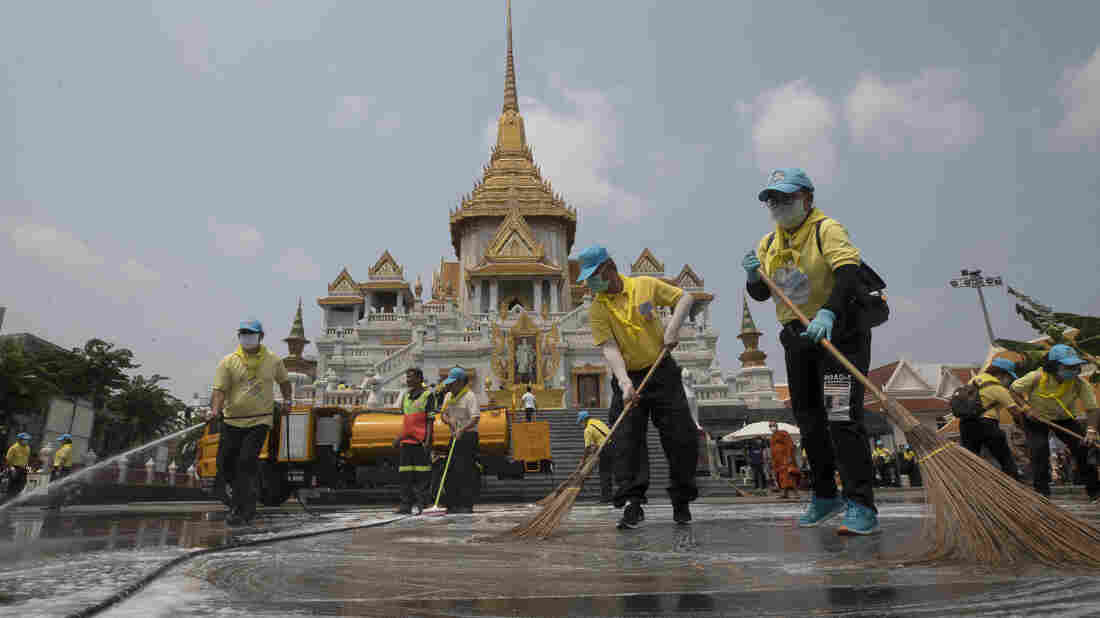 Volunteers clean as a precaution against the new coronavirus at Wat Traimit temple in Bangkok on Wednesday. Thailand's government has enacted stronger measures to combat the spread of COVID-19. Sakchai Lalit/AP hide caption 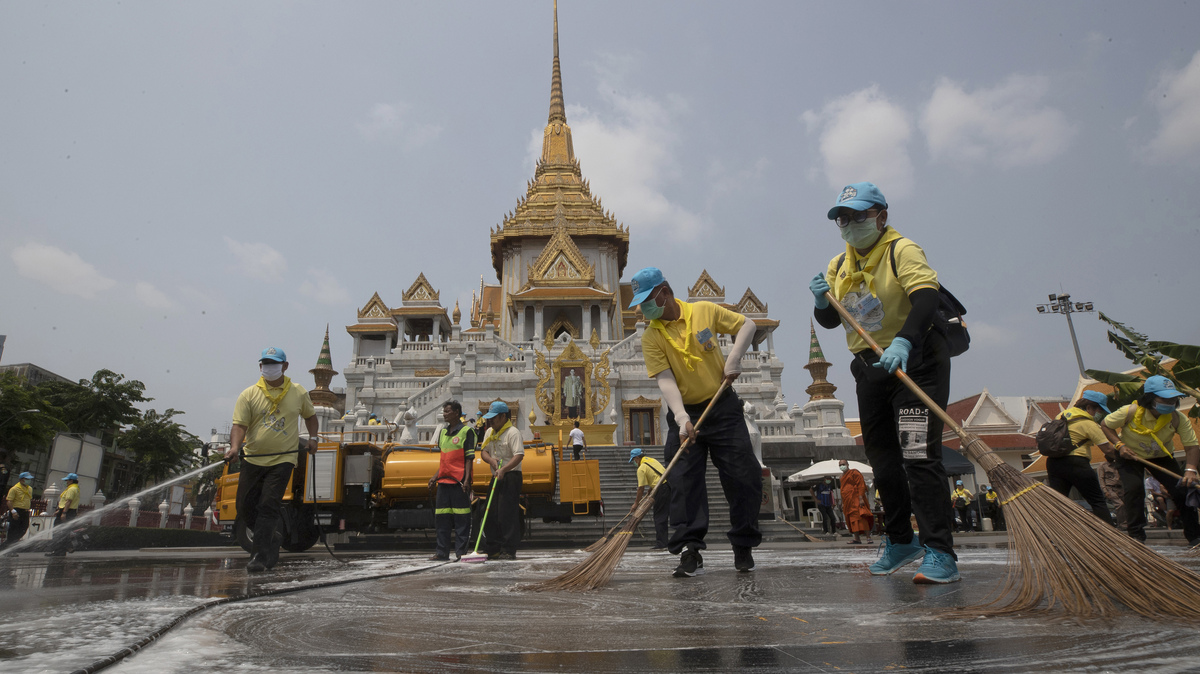 Volunteers clean as a precaution against the new coronavirus at Wat Traimit temple in Bangkok on Wednesday. Thailand's government has enacted stronger measures to combat the spread of COVID-19.

President Trump says the U.S. has reached an agreement with Canada to limit nonessential travel across their mutual border, as governments and people around the world grapple with the growing novel coronavirus pandemic that has upended daily life and sent shockwaves through the global economy.

Developments in the past 24 hours came as the worldwide total of confirmed infections from the virus was set to top 200,000, with some 8,000 dead from the resulting COVID-19 disease.

Here's a look at developments by region:

The European Union on Tuesday imposed a 30-day entry ban on nonessential travel for non-EU citizens in an effort to slow the spread of the epidemic on the continent, which has seen a dramatic surge in confirmed cases in recent weeks. In an announcement late Tuesday, German Chancellor Angela Merkel said the ban would still allow citizens of EU member states to move freely within the bloc.

After China, which was the original epicenter of the epidemic and still accounts for the vast majority of the global total number of confirmed infections, Italy has been hardest hit by the virus, with more than 31,000 cases and more than 2,500 deaths, according to a count kept by Johns Hopkins University.

Disrupted and Distanced: The Latest Advice On Navigating Coronavirus

Italian Prime Minister Giuseppe Conte called the situation in Europe a "socioeconomic tsunami" and said no country would go untouched by the virus.

Speaking to NPR Morning Edition host Steve Inskeep on Tuesday, David Unger, who teaches foreign policy at the Johns Hopkins School of Advanced International Studies in Italy, described the scene in Camogli, east of Genoa, where he has been on lockdown since the government imposed strict social distancing protocols aimed at containment of the virus.

Citizens in France are now required to show a document that details their reason for leaving home or face a 135 euro ($150) fine.

Spain, the country in Europe worst affected after Italy, saw the number of confirmed cases surge by some 2,000 in a single day. Total confirmed cases there are nearly 12,000. 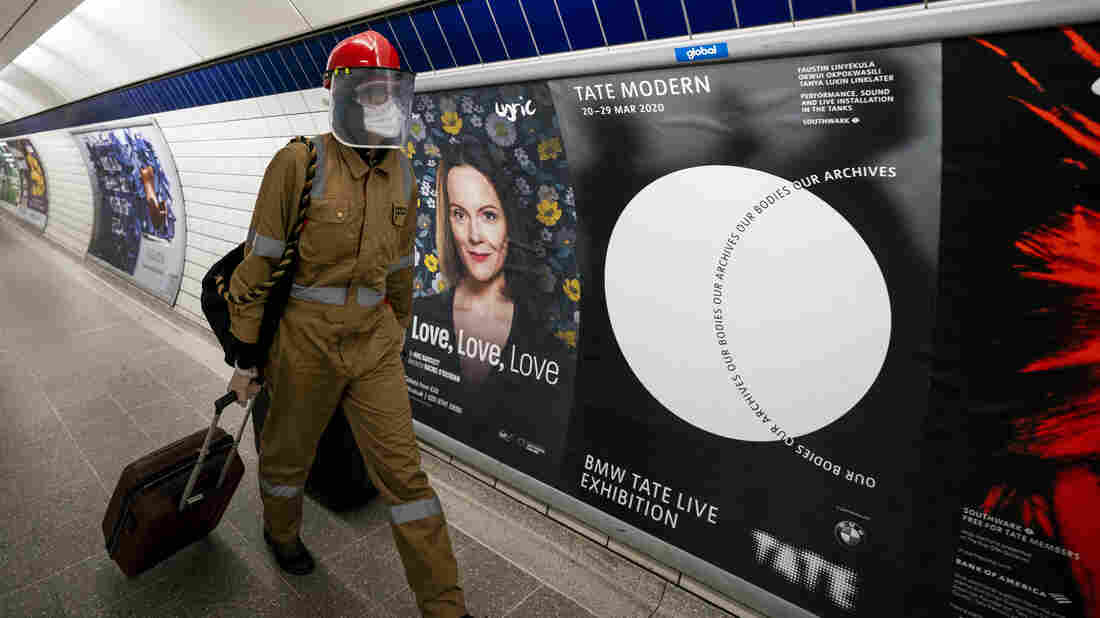 A commuter wearing a surgical mask for protection from coronavirus in the London Underground on Tuesday. Ming Yeung/Getty Images hide caption 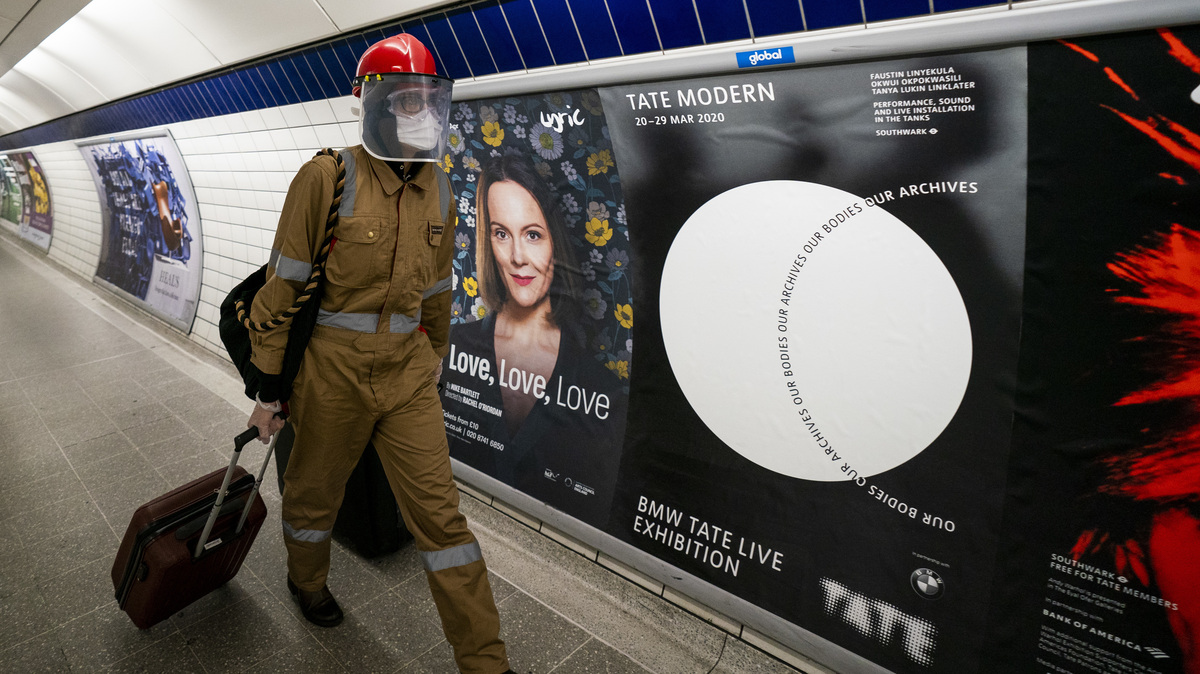 A commuter wearing a surgical mask for protection from coronavirus in the London Underground on Tuesday.

In the United Kingdom, Prime Minister Boris Johnson pledged billions of pounds to prop up the country's economy during the unprecedented outbreak, saying, "We must act like any wartime government and do whatever it takes to support our economy."

"We must support millions of businesses and tens of millions of families and individuals through the coming months," he said. "To do that, the government machine must and will respond with a profound sense of urgency."

The British supermarket chain Sainsbury's has set aside a few hours each day exclusively for those with disabilities and the elderly, who are most vulnerable to COVID-19, to shop at their stores to reduce their risk of exposure, according to the BBC. Sainsbury's move follows a similar one by groceries in Iceland.

Iran, which has seen a burgeoning outbreak rivaled so far only by the total number of confirmed cases in China and Italy, has granted the temporary release of some 85,000 inmates, including political prisoners, in an effort to forestall the spread of the virus there.

The latest announcement by Iran's judiciary on Tuesday added an additional 15,000 prisoners to the release of 70,000 last week.

Saudi Arabia's Council of Senior Scholars, the kingdom's highest religious authority, announced Tuesday the suspension of Friday prayers at most mosques, the state SPA news agency reported, according to Reuters. It said, however, that prayers would continue at the Two Holy Mosques in Mecca and Medina.

Australia's Prime Minister Scott Morrison announced a ban on nonessential gatherings of 100 or more people, similar to moves made in other countries fighting the pandemic. However, Morrison said schools and universities, shops, health services and public transport would be exempt, according to the Sydney Morning Herald. The announcement in Canberra came as New South Wales saw some 50 new cases in a 24-hour period. Australia has more than 450 confirmed cases.

In Japan, which saw an upsurge in cases in mid-February after the outbreak emerged from China, a welcome declining trend on the country's northernmost main island of Hokkaido does not mean the virus has peaked yet in the rest of the country, a study by Kyodo News shows, according to the news agency.

Kyodo said that clusters of infected people were continuing to spread the virus in the central prefectures of Hyogo and Aichi, near Osaka and Nagoya, the country's third and fourth most populous cities, respectively.

Tokyo is set to host the Summer Olympics this year, but the epidemic has led to speculation that the Games might be postponed. The government had earlier sought to quash the suggestion, but in recent days, Prime Minister Shinzo Abe has sounded less emphatic, according to Bloomberg.

"I want to hold the Olympics and Paralympics in their complete form, as proof that the human race will conquer the new coronavirus, and I gained support for that from the G7 leaders," he told reporters after a teleconference with the group's leaders, Bloomberg reports.

In Thailand, the Public Health Ministry reported 35 new confirmed infections, raising the country's total to 212. Ministry officials said the uptick in new cases was due to testing. It warned that people were ignoring advice from health officials and continuing "risky behavior."

The health ministry in India, the world's second most populous country, said the number of cases had risen to 147. 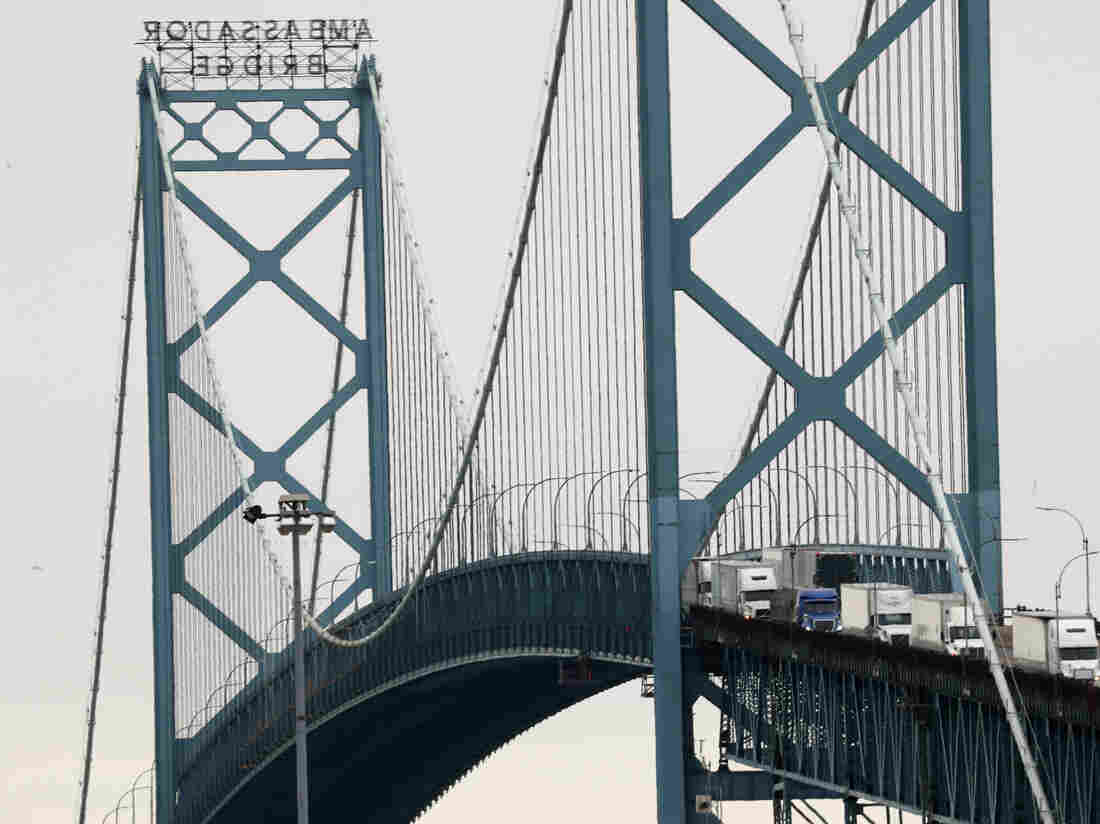 Vehicles move across the Ambassador Bridge between Detroit and Windsor, Ontario, as seen from Detroit on Monday. President Trump ordered the border with Canada partly closed on Wednesday. Paul Sancya/AP hide caption 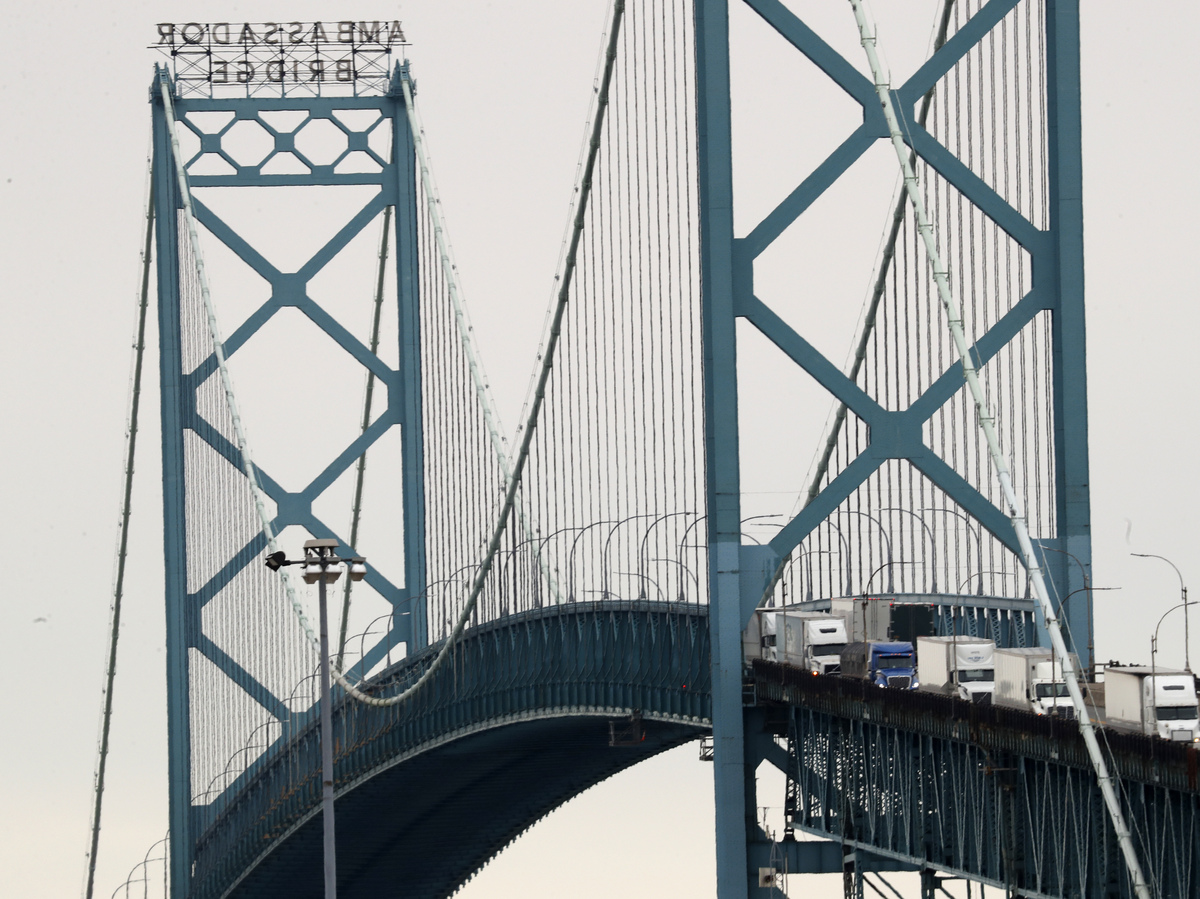 Vehicles move across the Ambassador Bridge between Detroit and Windsor, Ontario, as seen from Detroit on Monday. President Trump ordered the border with Canada partly closed on Wednesday.

Trump said Wednesday morning that the U.S. border with Canada will be temporarily closed to nonessential traffic by "mutual consent."

Multiple news outlets had previously reported that the two countries were working toward an agreement to stem the flow of people across the border.

Meanwhile, Mexico's President Andrés Manuel López Obrador has been the target of criticism this week for wading into crowds, shaking hands with and even kissing supporters, the AP reports. Brazil's President Jair Bolsonaro has come in for similar criticism. Brazil has more than 320 confirmed cases; Mexico has more than 80.

The government of Guatemala said Tuesday it was suspending flights to the U.S. in an effort to keep the virus from getting a foothold in the Central American country. The move effectively blocks the deportation of asylum-seekers under a deal reached with Washington in July for Guatemala to act as a third party conduit for the repatriation of asylum seekers rejected by the U.S. The Guatemalan Ministry of Foreign Affairs said the program would be halted as a precaution at least until authorities "establish adequate sanitary protocols to transfer [the refugees] to their home communities."

Asylum-Seekers Reaching U.S. Border Are Being Flown To Guatemala

In Venezuela, which has 33 confirmed cases, President Nicolás Maduro said Monday that the country would implement a nationwide quarantine. In a national address, Maduro said of the action, "It is necessary, it is indispensable, it is the response."

In Africa, which has so far been spared the brunt of the epidemic, some experts were expressing concern that the social distancing measures being implemented elsewhere would be slow to be adopted.

"That's the danger I'm worried about. We can't wait for a repeat of what happened in China," Oyewale Tomori, a professor of virology and former president of the Nigerian Academy of Science, told The New York Times.

South Africa, whose large number of immune-compromised HIV positive individuals are particularly vulnerable to COVID-19, on Wednesday reported a jump in new coronavirus infections. The country's health ministry said there had been 31 new cases, bring the confirmed total there to 116. Over the weekend, President Cyril Ramaphosa announced a series of measures meant to check the spread of the disease in the country. Ramaphosa called "for a change in behavior amongst South Africans," Al-Jazeera reports.