Accessibility links
COVID-19 Is Deadlier Than The Flu. How Else Do They Differ? : Goats and Soda There are definitely similarities between COVID-19, caused by the coronavirus, and influenza. But there are critical differences as well, including the death rate. 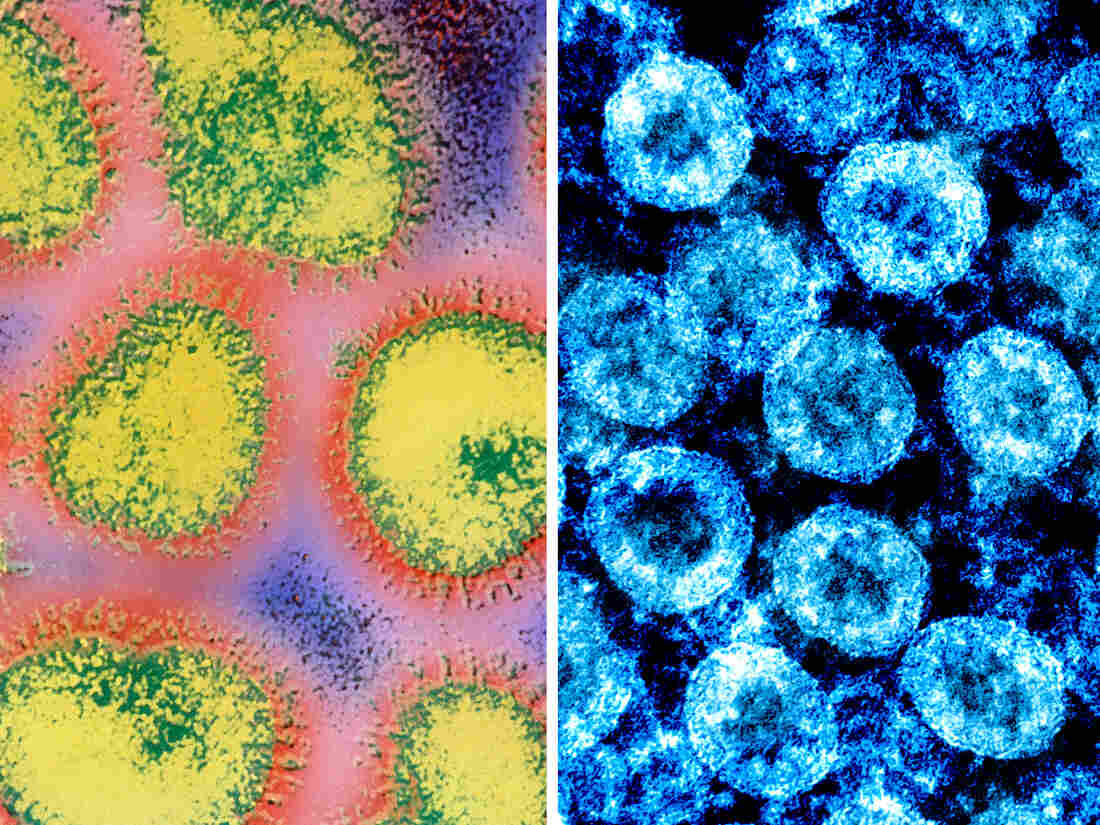 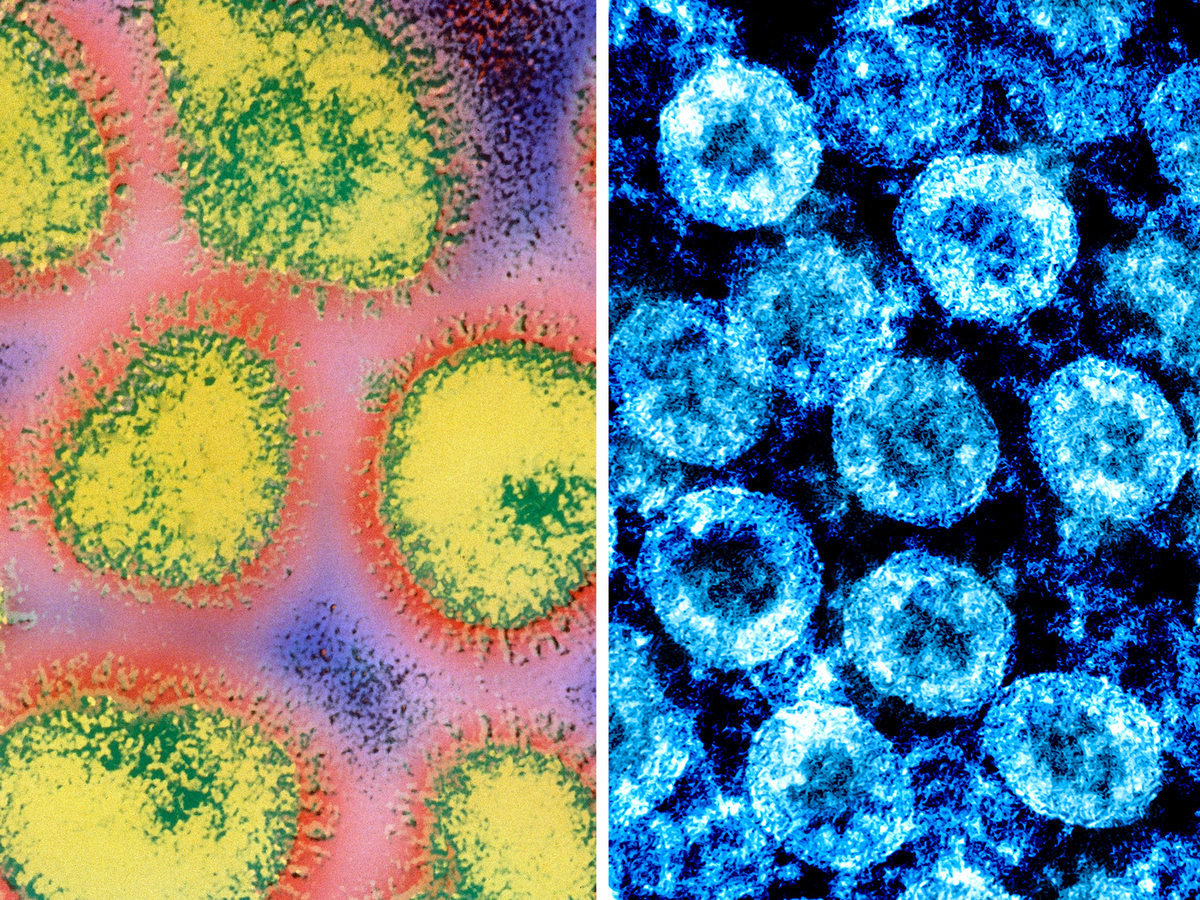 The fact that the novel coronavirus appeared in the middle of flu season has prompted inevitable comparisons. Is COVID-19, the disease caused by the virus, pretty much similar to the flu or does it pose a far greater threat?

Although there are still many unknowns about COVID-19, there is some solid information from researchers that sheds light on some of the similarities and differences at this time.

Fever, dry cough, fatigue and shortness of breath. These are the most frequent symptoms of COVID-19. Some patients might develop aches and pains; just 5% get the sniffles, according to data from China — indicating that COVID-19 is not usually an upper respiratory infection.

These are all symptoms that overlap with flu. The Centers for Disease Control and Prevention says that anyone who is experiencing these symptoms and who has been in direct contact with a confirmed COVID-19 patient, or who lives in an area where cases are circulating, should call their doctor for advice.

Flu and the coronavirus are both thought to be spread primarily through close contact with droplets expelled from the nose and mouth of a sick person. You can become infected by direct contact such as kissing but also by close talking with someone who's infected. The CDC recommends keeping a physical distance of about 6 feet from others. You can also pick up flu or the coronavirus if you touch a tabletop or phone that was coughed on, but not disinfected, in the past few hours or days, then touch your eyes, nose or mouth.

Data from China show that each coronavirus case seems to infect about 2 to 2.5 additional people. That's higher than the flu. The average patient spreads the flu virus to about 1.3 others.

New research suggests that the higher number of infections per coronavirus patient may be related to the frequency of presymptomatic transmission — when people who have been infected are not yet showing symptoms but in fact could be contagious. An analysis of data from China found that 13% of cases were likely caused by people spreading the coronavirus before they started coughing and feeling achy.

By contrast, flu is most contagious in the three or four days after symptoms begin, according to the CDC, and presymptomatic transmission doesn't seem to be a major driver of new cases.

It's also possible that the coronavirus can be transmitted by other methods. Researchers are trying to determine, for example, whether tiny droplets can stay suspended in the air in contagious doses, or if fecal matter can be a source of infection.

Degree of mild vs. severe cases

About 80% of coronavirus cases are mild to moderate, which ranges from having a fever and a cough to low-grade pneumonia. It might still be miserable, but you can heal up on your couch at home.

Data from China show that 20% of COVID-19 patients, though, are serious enough to get sent to the hospital. That's about 10 times more often than flu. Even though a great many people are hospitalized for the flu — the preliminary data for the 2018-19 flu season is nearly half a million — the rate of hospitalization is far lower: 1%-2% of cases, according to the CDC.

For the coronavirus, "what's particularly concerning are the number of people who are progressing to need hospital level care and then eventually critical care and who are dying, especially at the extremes of [older] age," says Dr. Parker Hudson, an epidemiologist at University of Texas at Austin's Dell Medical School.

People who are over 60 and who have other health problems are more at risk of severe illness and hospitalization — for both COVID-19 and flu.

Once a patient with a serious case of the coronavirus is hospitalized, the average stay is 11 days, according to a study based on January data from Wuhan — about twice as long as the five- to six-day average stay for flu.

The additional days mean additional stresses on the health care system. "To take care of intensive, really unwell people can often require two to three medical staff at one time, all in protective gear, for hours and hours," says Michael Ryan, director of the World Health Organization's Health Emergencies Program.

That's a big strain on our nurses and doctors and hospitals, and it's overlapping with flu season, which generally ends by May. From early October through the beginning of March, the CDC estimates that between 370,000 and 670,000 people were hospitalized with flu.

What percentage of the population will get each virus?

There are years of data that can answer that question for influenza. In the U.S., for example, in recent years about 8.3% of the total population get sick from flu each season, a CDC study found; including people who carry the flu virus but show no symptoms, that estimate ranges to up to 20%.

Nobody knows what percentage of the population will eventually contract the coronavirus., but there are some educated guesses. Since this is a new disease and there's no vaccine and no established immunity from past cycles, experts believe everyone is susceptible.

A March 19 letter from researchers at the University of Hong Kong and Harvard, published in Nature Medicine, predicted that globally, "at least one-quarter to one-half of the population will very likely become infected, absent drastic control measures or a vaccine."

An influential modeling analysis released March 16 from Imperial College of London predicted a worse-case scenario in which 81% of the U.S. population could get infected over the next few months, if no actions were taken to slow or contain the spread of the virus. Predictions from models like this appear to have spurred U.S. officials to implement social distancing measures to combat the virus's spread.

To come up with better data for COVID-19 infection rates, researchers are doing blood tests in China to see how many people have been infected in a place where the epidemic appears to have been successfully suppressed through efforts such as lockdowns, contact tracing and an increase in hospital capacity.

By contrast, COVID-19 is currently estimated to kill at least 10 people per thousand infected (1%). "It's about 10 times more lethal than the seasonal flu," said Dr. Anthony Fauci, director of the National Institutes of Allergy and Infectious Disease, in congressional testimony on March 11.

More data is needed to assess the COVID-19 death rate, including detailed figures on how many cases present with mild symptoms or no symptoms at all. So far, COVID-19 has killed about 10,000 people worldwide — and about 200 in the U.S. But infectious disease specialists warn that, if the coronavirus spreads widely in the U.S., the numbers could rise quickly.

"It does have the potential to be just as bad, if not worse, in terms of the overall number of deaths and severe cases as seasonal flu," says Angela Rasmussen, a virologist at Columbia University.

Rest and supportive care are the common treatments for both flu and for coronavirus cases that don't require hospitalization.

For flu, which has been studied intensively, doctors have some additional tools to fight it, says Dr. Meghan Freeman, an infectious disease fellow at the UPMC Children's Hospital of Pittsburgh. A drug called Tamiflu aims to stop the flu virus from replicating in the body and can lessen the severity of symptoms. Other treatments that prime the body's immune system are in development.

There are no approved treatments for COVID-19 yet, though researchers are racing to see if pills for other ailments could work against the coronavirus, and to develop specific therapies that would lessen symptoms and hasten recovery.

Existing medications are being evaluated in the U.S., China and other countries. "It is likely that we will know if they work in the next several months," said Fauci, director of the NIAID, in congressional testimony on March 11. Drugs under consideration include remdesevir, an experimental drug originally developed for Ebola, and an anti-malarial called chloroquine, according to WHO.

For vaccines that could prevent COVID-19, Fauci said it will take at least a year to a year and a half for a vaccine to be available to the public. Vaccine development requires a multistage process of human trials. "It will take three or four months to determine if [a vaccine option] is safe," he said, and at least another eight months to gauge whether it's effective. The first U.S. vaccine clinical trials started on Monday, the National Institutes of Health announced.

Modern flu vaccines were first developed in the 1930s and protected U.S. troops against the flu during World War II. A new vaccine is developed each year to combat the latest flu strains. This flu season, the CDC says that about 160 million to 170 million flu shots were shipped out — enough to cover about half the U.S. population.

While flu cases are found year-round, the flu does wane when the weather gets warm. In the U.S., each flu season varies, but the number of new flu cases tends to peak between December and February and tail off by the month of May.

Researchers think it has to do with how people spend more time outside when it's warmer, and how higher heat and humidity can cause some viruses to decay more quickly. They're also studying how the immune system may fluctuate with the seasons and exposure to sunlight.

Researchers will only know whether the coronavirus follows flu patterns by seeing whether infections decline as the seasons change. There's the possibility that it won't, so in the meantime, Aylward thinks hospitals should prepare as though COVID-19 is here to stay as a year-round health threat.