Accessibility links
Coronavirus Arrives In Africa. Here's How Countries Are Trying to Keep It At Bay : Goats and Soda Countries are doing everything from closing schools to banning weddings. But there is concern about the toll on fragile health-care systems, livelihoods and people with HIV, TB and malaria. 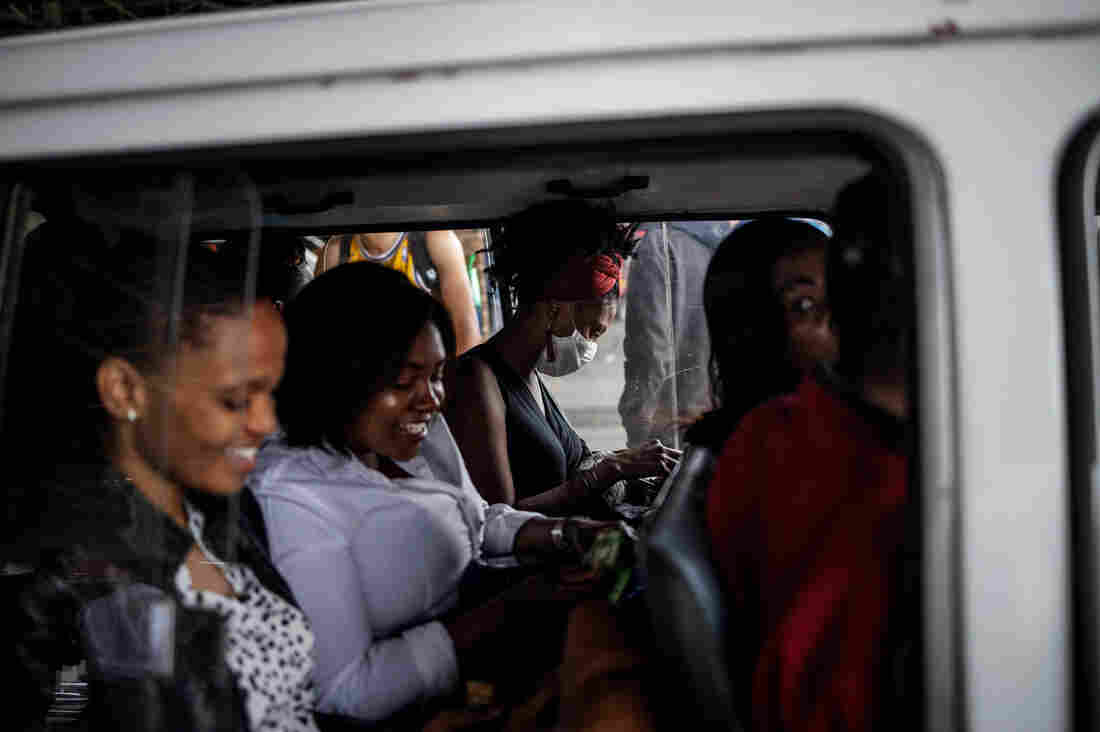 A woman wears a mask as a preventive measure inside a minibus taxi in Johannesburg. Michele Spatari/AFP via Getty Images hide caption 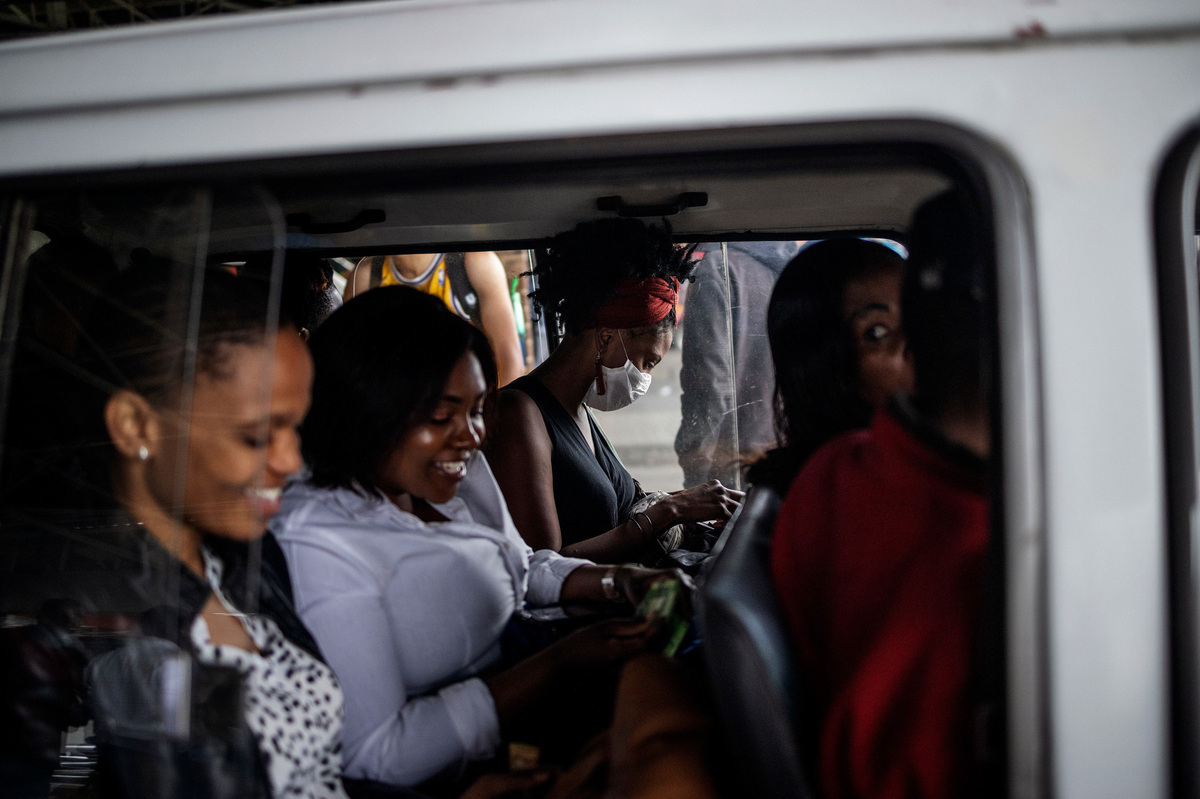 A woman wears a mask as a preventive measure inside a minibus taxi in Johannesburg.

Earlier this year, when the first reports of the coronavirus started to come out of China, global health officials said they were very worried about what would happen if the virus started spreading in Africa, where many health systems are already struggling.

Well, now the coronavirus is spreading in Africa.

So far the number of reported cases remains low. As of Saturday, more than half the nations on the continent — 36 of the 54 countries — had reported cases. South Africa, with 150 cases, is the only one with more than 100.

Nonetheless, many countries in Africa are responding aggressively to the pandemic.

Regional experts say a widespread pandemic in Africa could cripple the continent's fragile health-care systems and be devastating economically. It also could be difficult to contain while foreign donor nations that traditionally assist the continent in such crises are overwhelmed with their own outbreaks.

The head of the World Health Organization's Africa region, Dr. Matshidiso Moeti, said on Thursday that most of the cases have been imported from Europe and so far there is relatively limited community transmission of the virus on the continent.

"Although there may be some undetected infections, we don't think these are very large in number," Moeti said.

Given Africa's close ties to China and the explosive outbreaks happening elsewhere in the world, it's unclear why that is. Researchers are questioning whether Africa is somehow less vulnerable to the virus or if it is still just in an early phase of the epidemic.

Moeti speculated that the low number of cases may be because the Southern Hemisphere is just coming out of summer.

"In southern American countries there's also been spread but it has not been the same as we've seen in the Global North. So we are trying to understand if this could be related to temperature or to weather," she said in a video conference call with reporters. "We have a distinct flu season in the southern part of continent and some Eastern African countries. We may from this infer that we should expect ... perhaps in a couple of months when the winter sets in in the South ... to see an increase in the rate of transmission of this virus."

One question in Africa is whether the number of confirmed cases is so low simply because the virus isn't being detected.

At the beginning of February only two countries in sub-Saharan Africa —Senegal and South Africa — had the ability to test for the novel coronavirus. WHO has helped 43 more countries set up or augment their national laboratories so that they can also test for this pathogen.

The overall capacity of those labs is low, and the tests will have to be done in capital cities. But getting even a basic level of domestic testing capacity running could be crucial as borders close and international air transport grinds to a halt.

Managing a major outbreak on the continent could be difficult, Moeti said, and two of WHO's recommended interventions — social distancing and hand-washing — may not always be possible.

"Sometimes families live in houses where you don't have a bedroom for every family member," Moeti said. "Quite a few people in the family have to sit in the same space, sleep in the same space.

"In addition they may be in houses that do not have running water so the possibilities of hand-washing in the ways that it's recommended with soap is a challenge under those circumstances."

Tom Achoki, who's studied health care in Africa extensively, says the medical systems have improved significantly in many countries since the 2014 Ebola outbreak. "But still the health-care systems are very weak."

Achoki, the co-founder of Mass Sciences and a lecturer at the University of Pretoria, says by "very weak" he doesn't mean just a shortage of emergency room beds. "They're dealing with access to things like disinfectant," he says. There's a need to train workers on using masks and gowns to protect themselves when treating COVID-19 patients, he says. Achoki also points out that the data is still collected on paper forms rather than digitally in many African countries.

"So the transmission of data is not as effective," he says. "This is an epidemic which is moving very quickly." He says improving information systems is something that needs to be addressed and could hamper the ability of some countries to respond to this outbreak effectively.

Moore, who's now a visiting fellow at the Center for Global Development, says countries saw the devastation of the Ebola crisis and are taking steps to get ready for this virus.

"For example, Nigeria, they've applied the lessons from Ebola and they are doing their best to separate the response to the [coronavirus] pandemic from the provision of regular health care," he says.

To prevent that during this pandemic, countries across the continent are trying to get ready for COVID-19. Uganda hasn't yet confirmed a single case but it's already banned weddings and large religious gatherings. Kenya, Moore notes, has shut down schools.

But most African nations can't order nationwide or citywide lockdowns as Italy and China have. Moore says it's just not possible. "In an informal economy," he says. "People literally have to go out every day as a means of being able to feed themselves."

One of the other big concerns in Africa is how the coronavirus may affect places that are also battling other diseases such as malaria, cholera and HIV.

"HIV-positive individuals who are on medications are probably fine," says Karen Hofman, a professor of public health at the University of the Witwatersrand in Johannesburg. "The people that are most vulnerable ... and there are a lot of them ... are HIV-positive individuals who are not on medications." Roughly a third of the 7.7 million South Africans with HIV are not on treatment.

COVID-19 has been particularly deadly to people with compromised immune systems. Hofman says the expectation is that the disease would be quite bad if it starts spreading among people who are HIV-positive and not on medication.

South Africa also has a large number of people with tuberculosis. It's not known exactly how COVID-19 would play out in TB patients but piling a second respiratory disease on top of TB could be devastating.

Hofman says she hopes the arrival of coronavirus in South Africa will spur people who are HIV-positive to enroll in the government's free treatment program. She also says there might be a silver lining in getting more people to wash their hands, which could stop the spread of other diseases too.

"This is a big natural experiment that's going on right now. We don't really know exactly how it's going to play out," she says. But Hofman says South Africans and people in many low- and middle-income countries are accustomed to adversity.

"So possibly we will handle this a little bit better," she says. "But the fact is that this is going to have a huge economic consequence aside from the health issues. In a country where there is already a 30 to 35 percent unemployment, this is of grave concern to us."