Accessibility links
Quarantine Spots In India Lack Soap, Clean Toilets, Coronavirus Tests : Goats and Soda Billions of Indians face a strict lockdown. Those in quarantine have their own set of concerns about unsafe conditions. 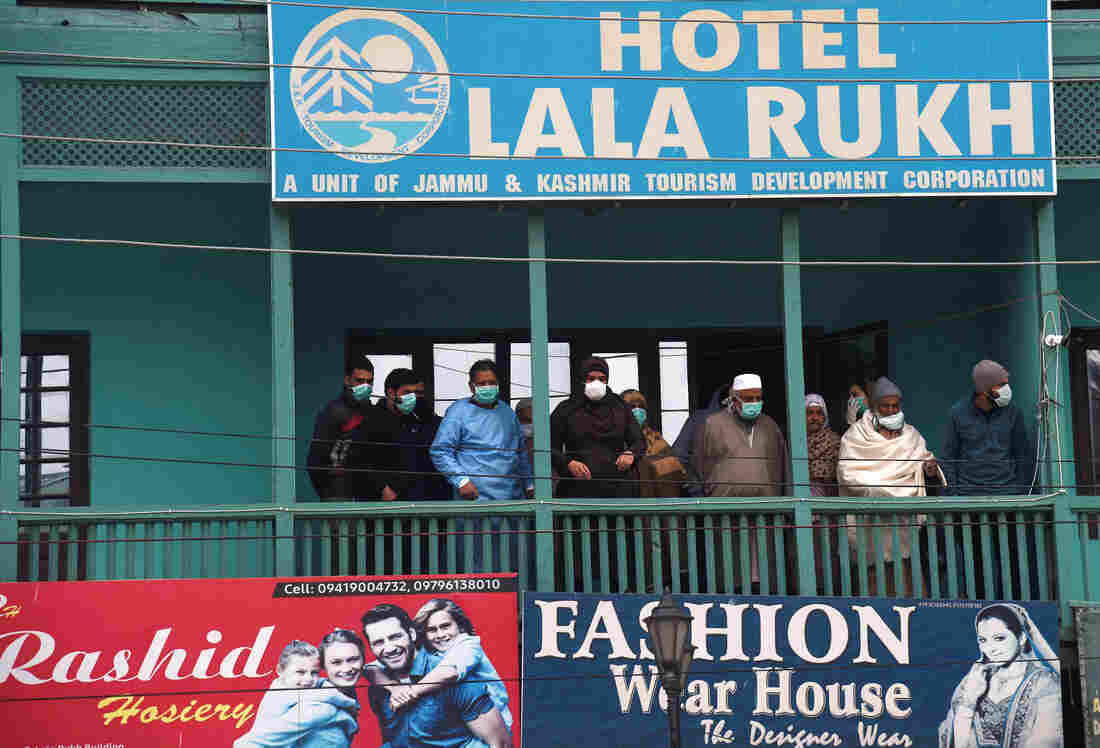 In quarantine at a hotel in Srinagar, India: A group of people who've returned from countries in the Middle East. Waseem Andrabi/Hindustan Times via Getty Images hide caption 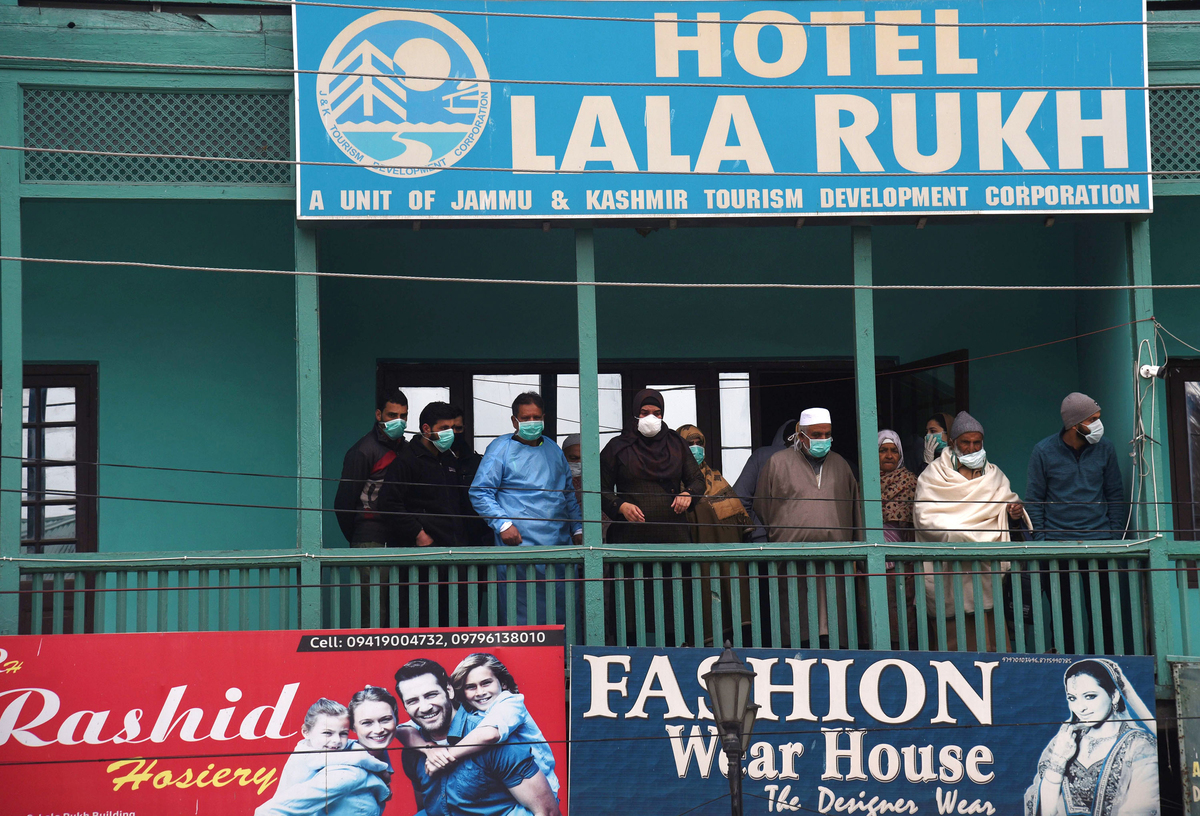 In quarantine at a hotel in Srinagar, India: A group of people who've returned from countries in the Middle East.

Not enough toilets – and the ones there are often dirty. Beds crammed together. The only way to shower is with water from a bucket that everyone has to share. No soap or hand sanitizer.

People who've been quarantined in India for suspected exposure to coronavirus say conditions inside government facilities are unsanitary and unsafe — ripe to foment an outbreak rather than prevent one. Indians are posting photos and videos on social media of dirty sheets, broken toilets and trash littering crowded quarantine centers.

The World Health Organization says the arc of the global pandemic may depend on what huge, densely-populated countries like India do next.

The second-most populous country behind China, India has reported more than 550 coronavirus cases and ten deaths, as of Wednesday night local time — in a population of 1.3 billion. That's a relatively low infection rate per capita. But the fear is that if the virus spreads through slums – where some 600 million Indians lack regular access to clean water – many millions could die. 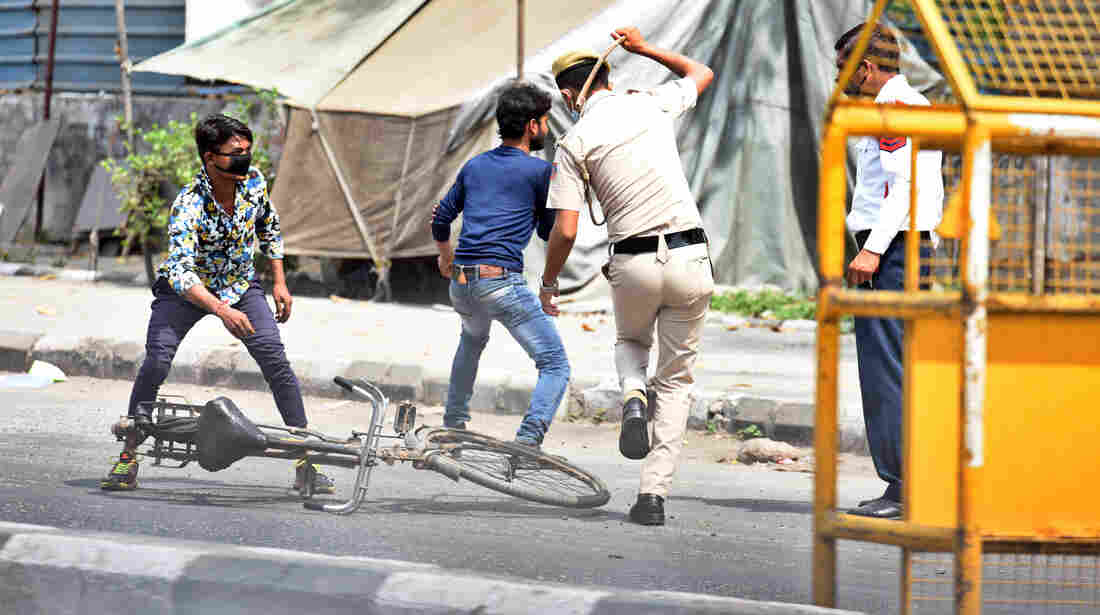 Delhi police react to commuters not complying with the lockdown imposed by the government to curb the spread of coronavirus. Raj K Raj/Hindustan Times via Getty Images hide caption

So in the early hours of Wednesday morning, India imposed the world's largest anti-coronavirus lockdown. For the next 21 days, no one across the country is allowed to leave their home except to go to buy food or medicine or to see a doctor. In a televised address, Prime Minister Narendra Modi said this is what's needed to "save every Indian." 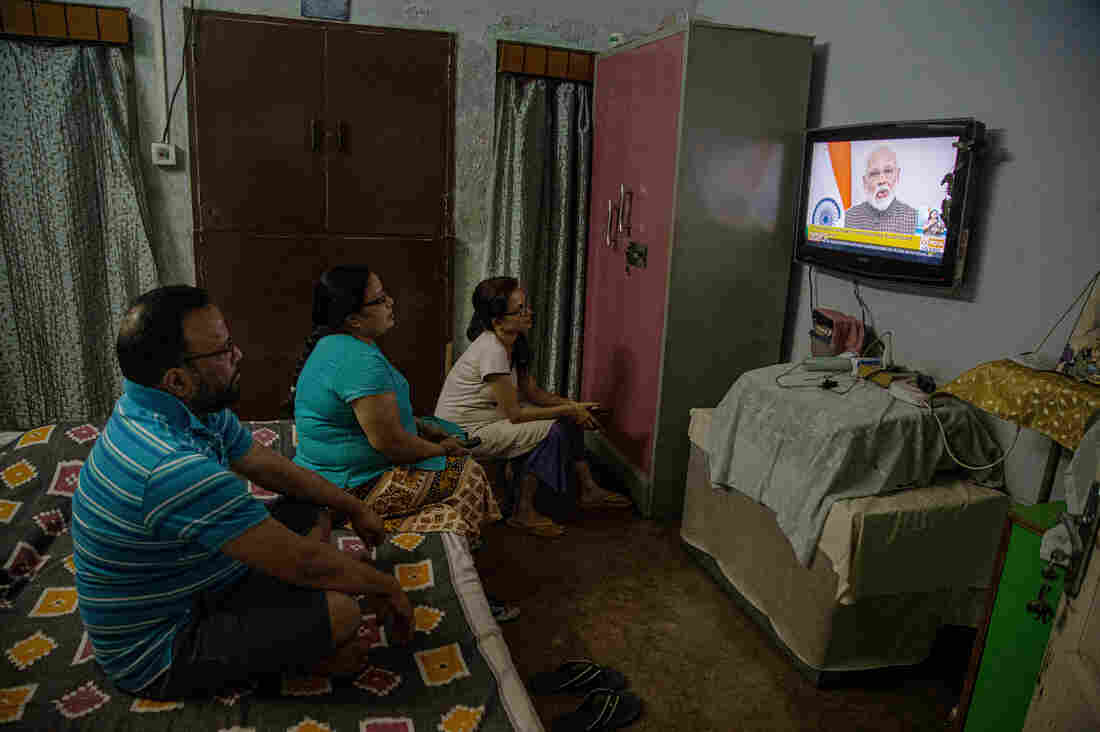 Most of the country's coronavirus cases are believed to be people who traveled abroad or had contact with someone who did. So in addition to the lockdown, the Indian government is also sending anyone it suspects of having the virus — particularly incoming travelers — into mandatory 14-day quarantine. The Health Ministry says there are some 60,000 beds for quarantine at facilities it's set up at university campuses and military barracks across the country.

But people inside say the conditions are dismal.

"There are beds without anything to separate them. The men's bathroom is in pretty bad shape with no hot water. Sometimes there is no handwash [soap], and we've run out of hand sanitizer," Aaliyah Khan, 28, told NPR by phone from inside one such facility set up on a college campus in Gurgaon, outside India's capital. "In the showers, there is only one bucket, and we have to share it with other passengers. So it's not the best facility to avoid contamination."

Khan was taken to the facility after landing Saturday at New Delhi's airport, with her husband. The couple was married March 6 in India and went on a honeymoon in the United States. As coronavirus spread, they cut short their trip and headed home.

On arrival in India, they found a chaotic scene in the airport: serpentine queues to get through immigration and airport security, passengers heckling and jostling to get ahead in the line, and no social distancing. The couple say they waited nearly 24 hours — after a 14-hour flight from New York — to leave the airport.

Officials screening incoming passengers asked Khan and her husband, Behzad Fatmi, how they were feeling. They admitted to having headaches and sore throats — but said it was likely from their long flight and the ordeal at the airport. To their surprise, officials cleared Fatmi to go home but said Khan would have to go into a government quarantine facility for 14 days.

Neither husband or wife has been tested for the virus. The Indian government is grappling with a shortage of testing kits. Amid criticism about the low number of Indians being tested, it recently asked private companies to start manufacturing kits. But supplies remain low.

Fatmi says he tried to explain to Indian officials that he had been with his wife the entire time and their risk of exposure to coronavirus was likely identical.

"I said, 'We've been together! We traveled to New York and Los Angeles — so many places. So if she has something — god forbid — then I also have it. So please also take me to the quarantine facility,'" Fatmi, 28, recalls. "But they said, 'No, we will not do that.'" 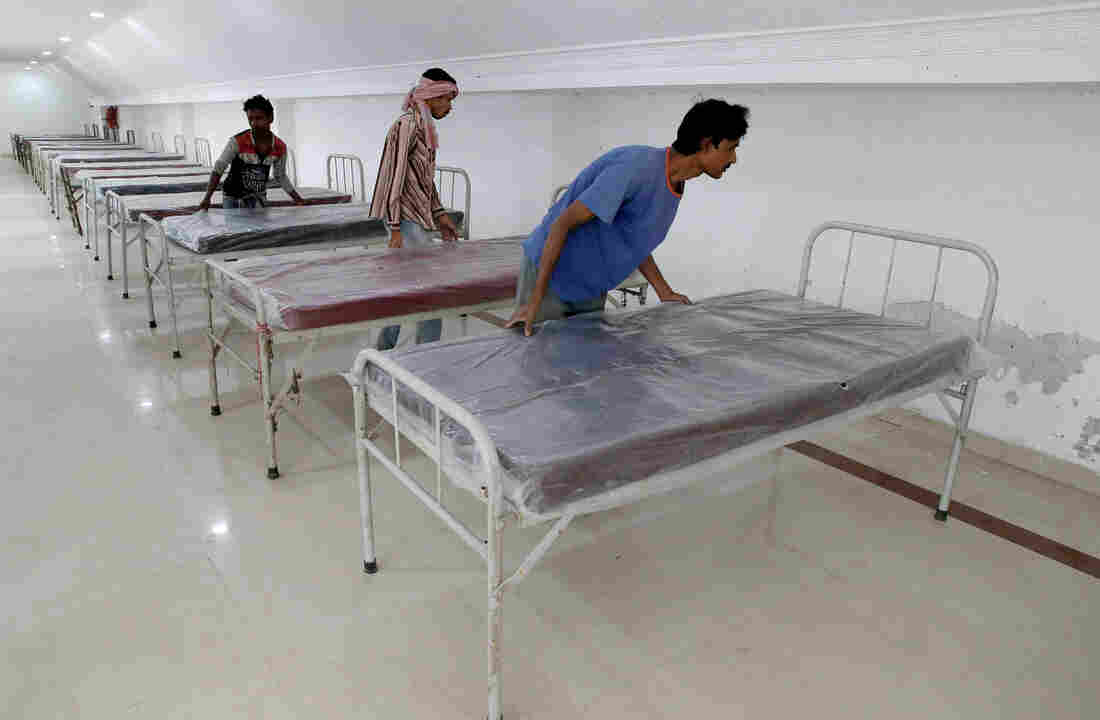 Workers prepare beds at a quarantine facility in Howrah on the outskirts of Kolkata, India. Rupak De Chowdhuri/Reuters hide caption

Upon reaching the college campus, Khan says passengers were taken into a co-ed dormitory with rows of 30 to 40 beds arranged about three feet apart. There are no curtains or screens for privacy, she says.

"As a Muslim, I'm not supposed to be in such a place," Khan says. "We are all in one hall, old and young, male and female."

She says she and her fellow female "inmates," as she calls them, have to share three toilets — which are often covered with excrement and littered with used sanitary napkins. On the first day, she says, they weren't given enough food and water.

"All of us are distressed, tired, sick of this situation," Khan says. "It's so high-risk."

Another tweet for the same. We are more than 40 people with only 3 washrooms and 5 large bed rooms. They want us to stay sanitised and this is what they give us. Guys this is a A MAJOR CONCERN. this way India cannot contain coronavirus only will get more cases. @PMOIndia @WHO pic.twitter.com/5q1wcr0xKX

Such unsanitary conditions in quarantine facilities are "totally unacceptable," Sujatha Rao, a former secretary with the Indian ministry of health and family welfare, told NPR in an email. This indicates that government officials at the lowest level, where quarantine is being carried out, do not sufficiently understand the importance of these measures, Rao says.

Despite police security, some Indians have been fleeing quarantine facilities. Unhygienic isolation units might also discourage people from reporting their symptoms, says Khan.

"We are paying the price for being honest," she says.

Authorities at Indian airports have been putting a stamp with indelible ink on the hands of passengers who've been asked to home quarantine. The stamp reads "proud to protect" with the name of the city and the date until which the individual has been instructed to stay at home. Police have been checking up with phone calls and surprise visits on those asked to self-quarantine. In some states, authorities are using cellphone data and GPS for contact tracing. That has raised privacy concerns. 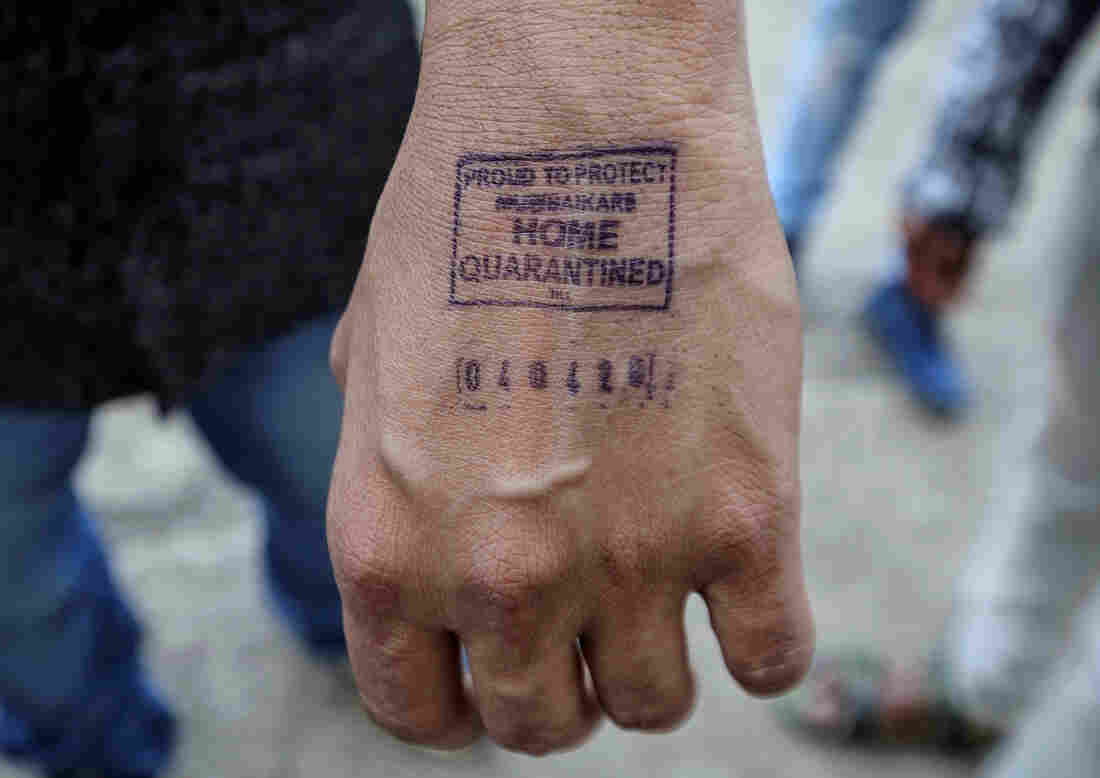 Airport authorities are stamping the hands of people arriving in the country to show how long they need to stay in quarantine at their home. Prashant Waydande/Reuters hide caption

Khan says that after their initial distress, she and her fellow quarantine mates are slowly starting to accept the situation they're in. She's become close with an elderly woman.

"The woman doesn't have a phone, so her daughters call me and I hand my phone to her," Khan explains.

They exchange stories about their families, as they live in limbo, awaiting a coronavirus test.