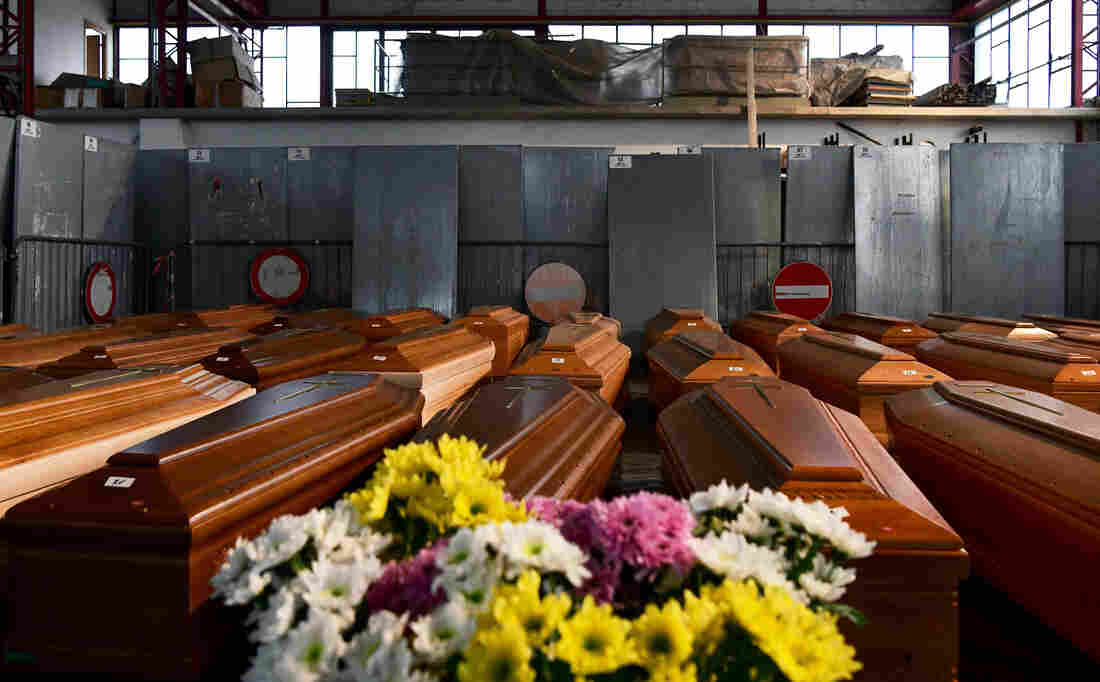 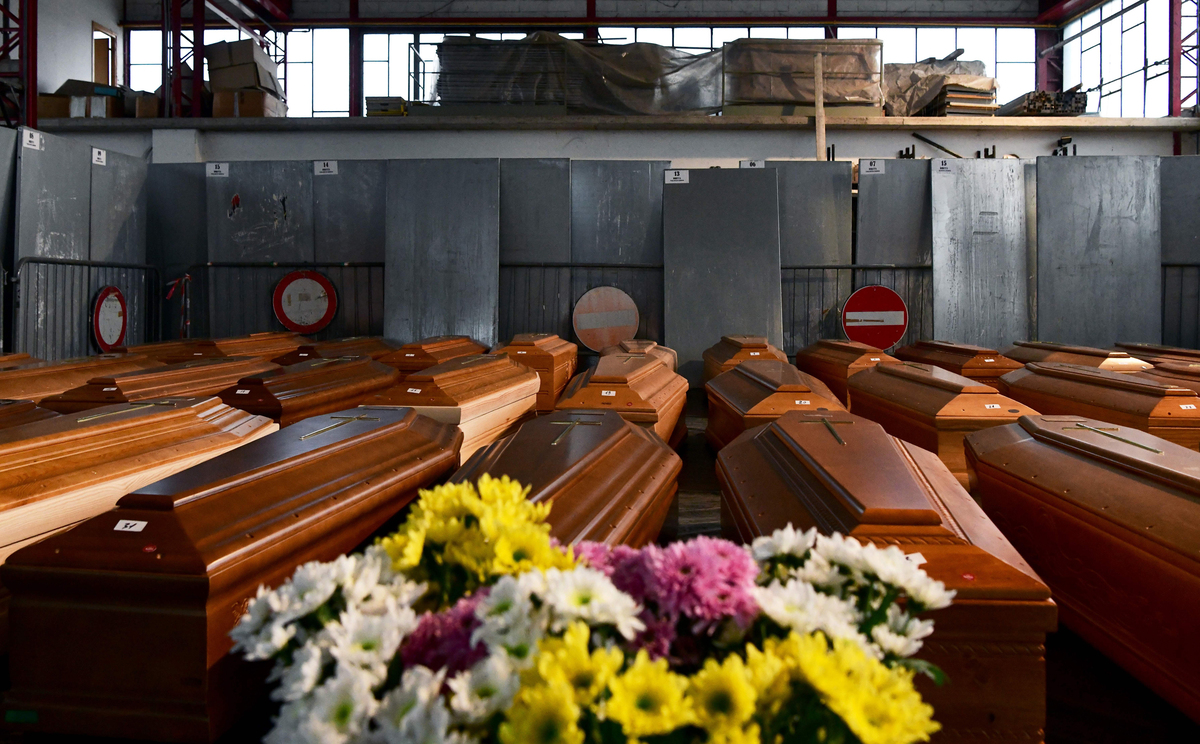 Coffins of deceased people stored in a warehouse near Bergamo — a city at the heart of Italy's coronavirus crisis — before being transported to another region for cremation.

The coronavirus appears to be much more lethal in some countries than in others.

In Italy, about 10% of people known to be infected have died. In Iran and Spain, the case fatality rate is higher than 7%. But in South Korea and the U.S. it's less than 1.5%. And in Germany, the figure is close to 0.5%.

The answer involves how many people are tested, the age of an infected population and factors such as whether the health care system is overwhelmed, scientists say.

"Case fatality rates have been very confusing," says Dr. Steven Lawrence, an infectious disease expert and associate professor of medicine at Washington University School of Medicine in St. Louis. "The numbers may look different even if the actual situation is the same."

So it's likely that the seemingly stark difference between Germany and Italy is misleading and will diminish as scientists get more data, Lawrence says.

Also, because of the way countries monitor pandemics like the coronavirus, he says, the case fatality rate tends to decrease over time. The reason: When a new disease first shows up, testing usually focuses on severely ill people who are at high risk of dying. Later on, testing is more likely to include people with milder illness who are less likely to die.

That's what happened with West Nile virus, which appeared in the U.S. in 1999. At first, when scientists only knew of about a few dozen cases, it appeared the mortality rate was higher than 10%. But wider testing eventually found hundreds of thousands of people who'd been infected but never got sick enough to notice. Today, more than 3 million Americans have been infected and studies show that fewer than 1% become seriously ill.

If that pattern holds for coronavirus, countries such as Italy, which have been testing only the sickest patients, are likely to see their case fatality rates fall. But countries such as Germany, which has been testing both critically ill people and those with milder symptoms from the beginning, are less likely to see major changes in the case fatality rate.

The U.S. is somewhere in between. Testing was severely limited when cases started to appear. Since then labs have begun testing tens of thousands of people with less severe illness.

A country's case fatality rate is simply the number of deaths (the numerator) divided by the number of infections (the denominator). The problem is, both of these numbers may be unreliable.

For example, when an outbreak begins and health officials aren't looking for the virus, some people may die at home and never be diagnosed. That would lower the numerator and "might lead to an underestimate of the case fatality rate," Lawrence says.

But a much more likely scenario, he says, is that early in an outbreak, testing is limited to people who are so sick they wind up in the hospital. That means the only infections that get counted are in the people most likely to die. So the denominator is missing a huge number of infected people who survive, and that makes the virus appear much more deadly than it really is.

This is probably one reason that early death rates in China appeared so high, says Gerardo Chowell, a professor of epidemiology and biostatistics in the department of population health sciences at Georgia State University. Chowell is part of a team that has been using statistical modeling to study the outbreak in China and South Korea.

When cases started showing up in the city of Wuhan, Chinese health officials "were obviously caught by surprise" and lacked the ability to test many patients, Chowell says. So testing was restricted to the sickest people. That probably contributed to early evidence that the fatality rate in Wuhan was 4% or more.

A study published last week estimated that in Wuhan, the chance that someone who developed coronavirus symptoms would die was actually 1.4%.

In South Korea, though, "they have been doing massive testing" since the first cases were detected, Chowell says. As a result, that nation has been able to count infected people with mild symptoms as well as those who become severely ill. That may be one reason the case fatality rate in South Korea has remained below 2%.

Another factor affecting coronavirus fatality rates is the characteristics of the population that is infected at any given moment, says Mary Bushman, a postdoctoral researcher at Harvard's Center for Communicable Disease Dynamics and an author of the Wuhan study.

In Washington state, Bushman says, the first cases appeared in nursing home residents, who tend to be extremely vulnerable to the disease. That produced "an alarming number of deaths being reported," Bushman says. At one nursing home, 34 of 81 infected residents died, which is a case fatality rate of 42%.

But as Washington began testing for the virus outside the nursing home, it became clear the case fatality rate in the general population was vastly lower.

And across the U.S., as testing has expanded to include younger and healthier segments of the population, the fatality rate has decreased to levels similar to those in South Korea. "And I think we'll probably continue to see further decreases," Bushman says.

Differences in testing aren't the only reason that case fatality rates vary, though. In some countries, infected people have been more likely to die because the health care system has been overwhelmed, leaving critically ill coronavirus patients without access to lifesaving care, Chowell says.

In Wuhan, he says, high case fatality rates early on were probably caused in part by the inability of local hospitals to handle the huge influx of patients sick with the coronavirus.

An overburdened health care system may also be contributing to the high case fatality rate in Italy. "During those high peaks where the health care systems can be overwhelmed, there may not be enough people or ICU beds or ventilators to be able to provide the critical care that is needed," Lawrence says.

Ultimately, it will take a different sort of test to assess how lethal coronavirus has been, Lawrence says. Most current tests only detect active infections — when the virus is still present in the body. But a different type of test — now being developed but still probably months away from wide use — can reveal whether a person has ever been infected. And that is what scientists need to know to establish the true denominator for coronavirus and to find the true case fatality rate.

In the U.S., it's likely that the case fatality rate from coronavirus will end up somewhere between 0.5% and 1%, once a broad cross-section of the population has been tested, Lawrence says.

But that's no reason for the nation to relax, he adds.