Accessibility links
Some Recovered Coronavirus Patients In Wuhan Are Testing Positive Again : Goats and Soda NPR interviewed four residents of Wuhan who contracted the virus, recovered — but then had a retest that turned positive. What does that mean for China's recovery from COVID-19? 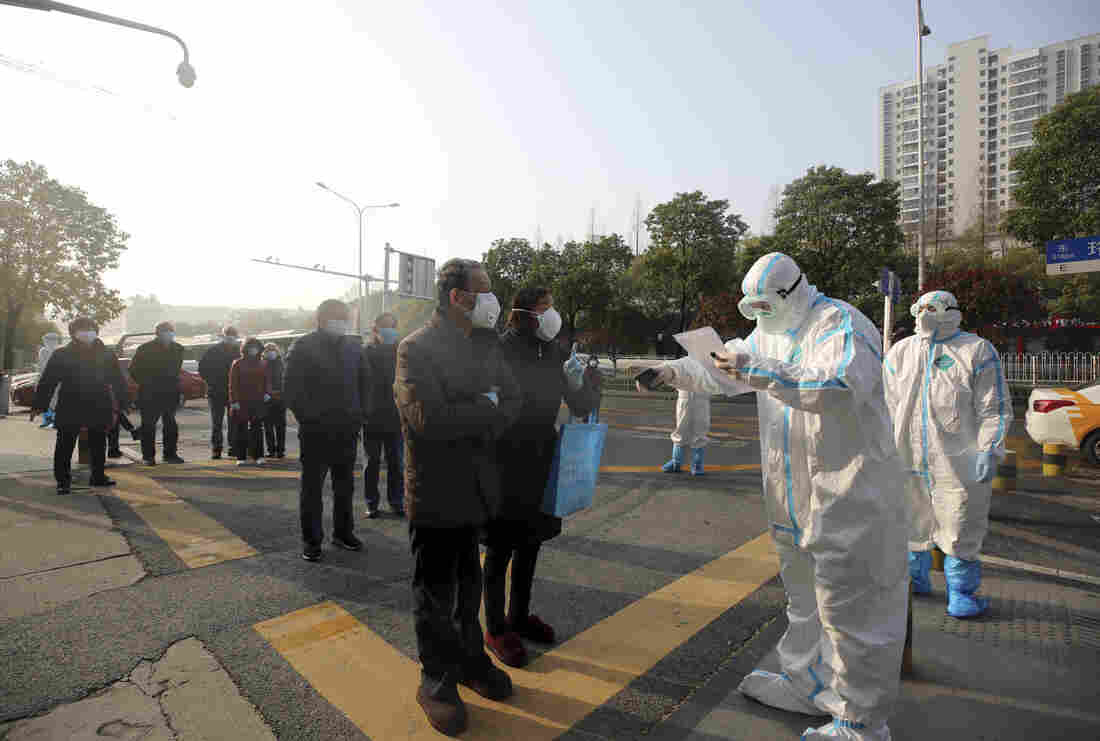 People in Wuhan, China, line up at a facility that tests discharged COVID-19 patients as well as individuals who had been held in isolation. Feature China/Barcroft Media via Getty Images hide caption 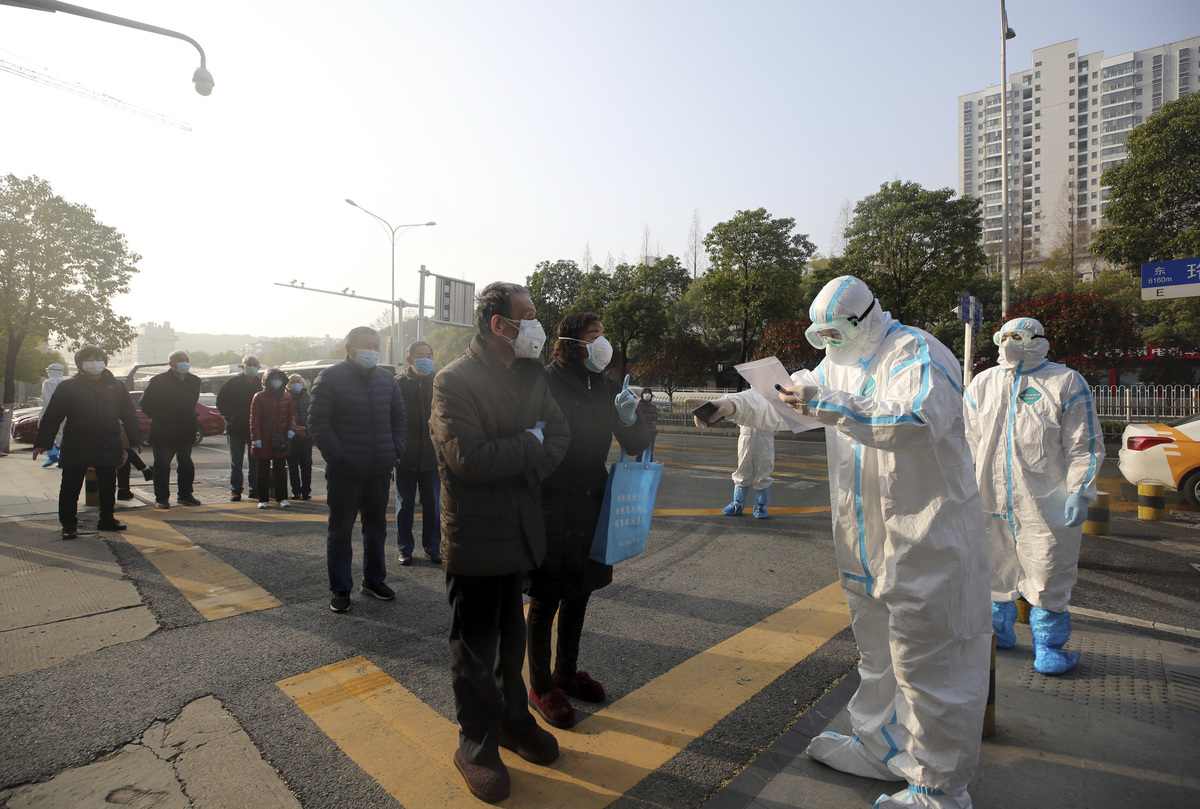 People in Wuhan, China, line up at a facility that tests discharged COVID-19 patients as well as individuals who had been held in isolation.

A spate of mysterious second-time infections is calling into question the accuracy of COVID-19 diagnostic tools even as China prepares to lift quarantine measures to allow residents to leave the epicenter of its outbreak next month. It's also raising concerns of a possible second wave of cases.

From March 18-22, the Chinese city of Wuhan reported no new cases of the virus through domestic transmission — that is, infection passed on from one person to another. The achievement was seen as a turning point in efforts to contain the virus, which has infected more than 80,000 people in China. Wuhan was particularly hard-hit, with more than half of all confirmed cases in the country.

But some Wuhan residents who had tested positive earlier and then recovered from the disease are testing positive for the virus a second time. Based on data from several quarantine facilities in the city, which house patients for further observation after their discharge from hospitals, about 5%-10% of patients pronounced "recovered" have tested positive again.

Some of those who retested positive appear to be asymptomatic carriers — those who carry the virus and are possibly infectious but do not exhibit any of the illness's associated symptoms — suggesting that the outbreak in Wuhan is not close to being over.

NPR has spoken by phone or exchanged text messages with four individuals in Wuhan who are part of this group of individuals testing positive a second time in March. All four said they had been sickened with the virus and tested positive, then were released from medical care in recent weeks after their condition improved and they tested negative.

Two of them are front-line doctors who were sickened after treating patients in their Wuhan hospitals. The other two are Wuhan residents. They all requested anonymity when speaking with NPR because those who have challenged the government's handling of the outbreak have been detained.

One of the Wuhan residents who spoke to NPR exhibited severe symptoms during their first round of illness and was eventually hospitalized. The second resident displayed only mild symptoms at first and was quarantined in one of more than a dozen makeshift treatment centers erected in Wuhan during the peak of the outbreak.

But when both were tested a second time for the coronavirus on Sunday, March 22, as a precondition for seeking medical care for unrelated health issues, they tested positive for the coronavirus even though they exhibited none of the typical symptoms, such as a fever or dry cough. The time from their recovery and release to the retest ranged from a few days to a few weeks.

Could that second positive test mean a second round of infection? Virologists think it is unlikely that a COVID-19 patient could be re-infected so quickly after recovery but caution that it is too soon to know.

Under its newest COVID-19 prevention guidelines, China does not include in its overall daily count for total and for new cases those who retest positive after being released from medical care. China also does not include asymptomatic cases in case counts.

"I have no idea why the authorities choose not to count [asymptomatic] cases in the official case count. I am baffled," said one of the Wuhan doctors who had a second positive test after recovering.

These four people are now being isolated under medical observation. It is unclear whether they are infectious and why they tested positive after their earlier negative test.

It is possible they were first given a false negative test result, which can happen if the swab used to collect samples of the virus misses bits of the virus. Dr. Li Wenliang, a whistleblowing doctor who later died of the virus himself in February, tested negative for the coronavirus several times before being accurately diagnosed.

In February, Wang Chen, a director at the state-run Chinese Academy of Medical Sciences, estimated that the nucleic acid tests used in China were accurate at identifying positive cases of the coronavirus only 30%-50% of the time.

Another theory is that, because the test amplifies tiny bits of DNA, residual virus from the initial infection could have falsely resulted in that second positive reading.

"There are false positives with these types of tests," Dr. Jeffrey Shaman, a professor of environmental health sciences at Columbia University, told NPR by email. Shaman recently co-authored a modeling study showing that transmission by individuals who did not exhibit any symptoms was a driver of the Wuhan outbreak.

How real is China's recovery?

To leave Wuhan, residents must first test negative for the coronavirus, according to municipal authorities. Such screenings will identify some remaining asymptomatic virus carriers. But the high rate of false negatives that Chinese doctors have cited means many with the virus could pass undetected.

Last Thursday, Wuhan reported for the first time since the outbreak began that it had no new cases of the virus from the day before — a milestone in China's virus containment efforts. The city reported a zero rise in new cases for the following four days.

But Caixin, an independent Chinese news outlet, reported earlier this week that Wuhan hospitals were continuing to see new cases of asymptomatic virus carriers, citing a health official who said he had seen up to a dozen such cases a day.

Responding to inquiries about how the city was counting asymptomatic cases, Wuhan's health commission said Monday that it is quarantining new asymptomatic patients in specialized wards for 14 days. Such patients would be included in new daily case counts if they develop symptoms during that time, authorities said.

"Based on available World Health Organization data, new infections are mainly transmitted by patients who have developed symptoms. Hence [asymptomatic cases] may not be the main source of transmission," the commission said.

A researcher at China's health commission told reporters Tuesday that asymptomatic carriers "would not cause the spread" of the virus. Zunyou Wu, the researcher, explained this was because the authorities were isolating people who had close contact with confirmed patients. Wu did not explain how they would identify asymptomatic carriers who had no close contact with confirmed patients.

Addressing growing public concern of asymptomatic patients, China's Premier Li Keqiang urged during Thursday's senior-level government meeting that "relevant departments must ... truthfully, timely, and openly" answer questions, such as whether these patients are infectious and how the course of the outbreak may change.

Research suggests that the spread can be caused by asymptomatic carriers. Studies of patients from Wuhan and other Chinese cities who were diagnosed early in the outbreak suggest that asymptomatic carriers of the virus can infect those they have close contact with, such as family members.

"In terms of those who retested positive, the official party line is that they have not been proven to be infectious. That is not the same as saying they are not infectious," one of the Wuhan doctors who tested positive twice told NPR. He is now isolated and under medical observation. "If they really are not infectious," the doctor said, "then there would be no need to take them back to the hospitals again."