Accessibility links
Kenyan Poet Writes Letters To Coronavirus That Are Sad, Funny ... And Hopeful : Goats and Soda Samuel Mang'era admits he is afraid of the virus, but he writes open letters to it without fear and with both sorrow and humor. 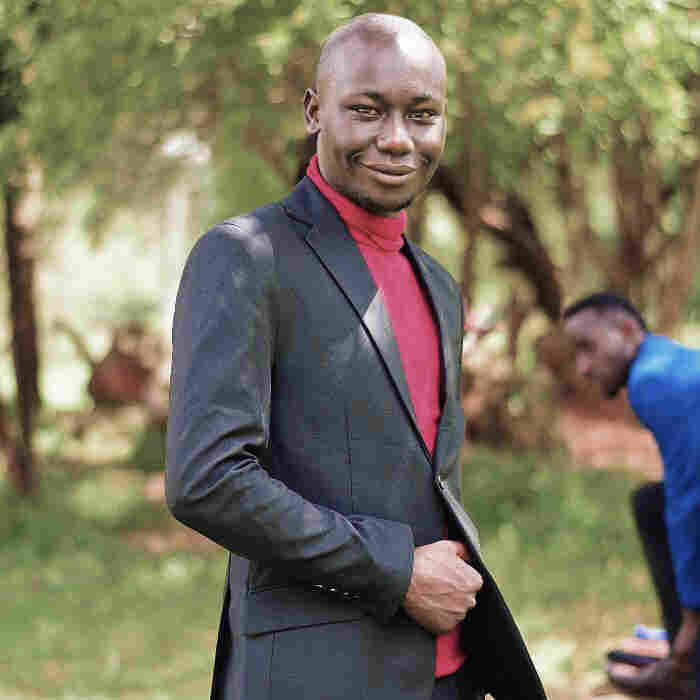 Samuel Mang'era at Kenyatta University's Arboretum in Nairobi. One of his messages to the coronavirus: "We also cannot afford to pay you too much attention" — especially with a huge plague of locusts at hand. PTP Studios hide caption 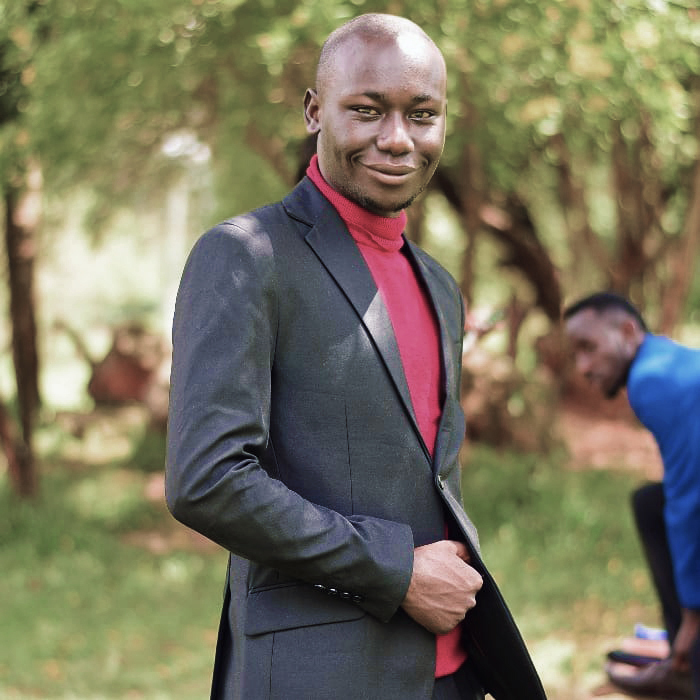 Samuel Mang'era at Kenyatta University's Arboretum in Nairobi. One of his messages to the coronavirus: "We also cannot afford to pay you too much attention" — especially with a huge plague of locusts at hand.

I met "Sir" Lucky Samuel Man'gera just days after the Kenyan government had begun shutting down flights and schools and asking people to stay at home. Kenya has reported 31 cases of COVID-19 and over the past two weeks, the government has been rolling out a more and more stringent lockdown, which now includes a curfew.

We met at a bar, past Nairobi's industrial area. The bar was completely empty, but on the way there, I saw people paying little mind to the new restrictions: Men, women, children were out on the streets, buying and selling produce; they were boarding crowded buses and without the masks we've gotten so used to seeing on TV in other countries.

I wanted to meet Man'gera after I read one of his Facebook posts. It was an open letter to the new coronavirus.

Welcome to Kenya. A few things you should know. Here we don't die of flu, don't be surprised if you fail to succeed. Usishangae [Don't be surprised], everything fails in Kenya.

The post pointed out the constant struggle of living in Kenya and the many ways Kenyans are let down by the government. It pointed out that when this new epidemic arrived here, there were already many other things Kenyans had to worry about — from disease to traffic deaths. It is a sentiment I've heard from other Kenyans and something I heard often in Democratic Republic of Congo when I was covering the second largest Ebola outbreak in history.

Kenya is not excited to host coronavirus, Mang'era wrote. The locusts – a historic infestation that experts warn could eat through much of Kenya's food — got here first. "We also cannot afford to pay you too much attention because we really really broke," he wrote.

I looked at Mang'era sitting on the far side of the table. He's a college student who writes poetry and makes films. He's slim and waits for a reaction to his words with a mischievous grin. I tell him while his post is funny, it's also really sad.

He nods in agreement. He said that's what he wanted to capture — the humor you have to have to live in a place as tough as Kenya.

"Honestly, Kenyans are hardcore people," he said. "So I wanted to express how Kenyans are survivors in a comic way."

The thing is, out here you don't have to look far to find death. The roads are filled Proboxes, station wagons that zig-zag the country at high speeds, sagging with passengers and cargo. In Japan, the cars were recalled by the manufacturer for being dangerous.

"Here in Kenya we survive by Probox," he said, "because we don't have an alternative."

Mang'era's open letter to coronavirus is full of bravado — but also an admission of a deep vulnerability.

We are more likely to die of a cholera attack than to be killed by you. For us, every day is a run escape from death. We are the walking dead. Death is part of our lives the shadow that lingers over us from the time the umbilical cord is cut and buried behind the house to the time we fundraise for expensive arrangements to bury a no longer useful block of dead meat.

As we talked, one other customer walked into the empty bar. He opened a laptop and jumped on the phone. He told the person on the other end that he's worried. Kenyans live hand to mouth. How will they stay home? How will they survive this lockdown?

Mang'era admitted that this is the first time he had been out of his house for days. He had a cough and he was terrified he might have CoVid-19. But in his writing, there is no fear.

Death can befall us anytime and we are not scared. It if comes, let it come. Why worry over what we can't control? Everything dies right? Even you corona will die!