Accessibility links
India's Coronavirus Lockdown Means Millions Of Migrant Workers Can't Earn A Living : Goats and Soda Amid a 21-day lockdown to help control the spread of the coronavirus, millions of workers in India's cities have no income, no food — and so are heading back to their villages. 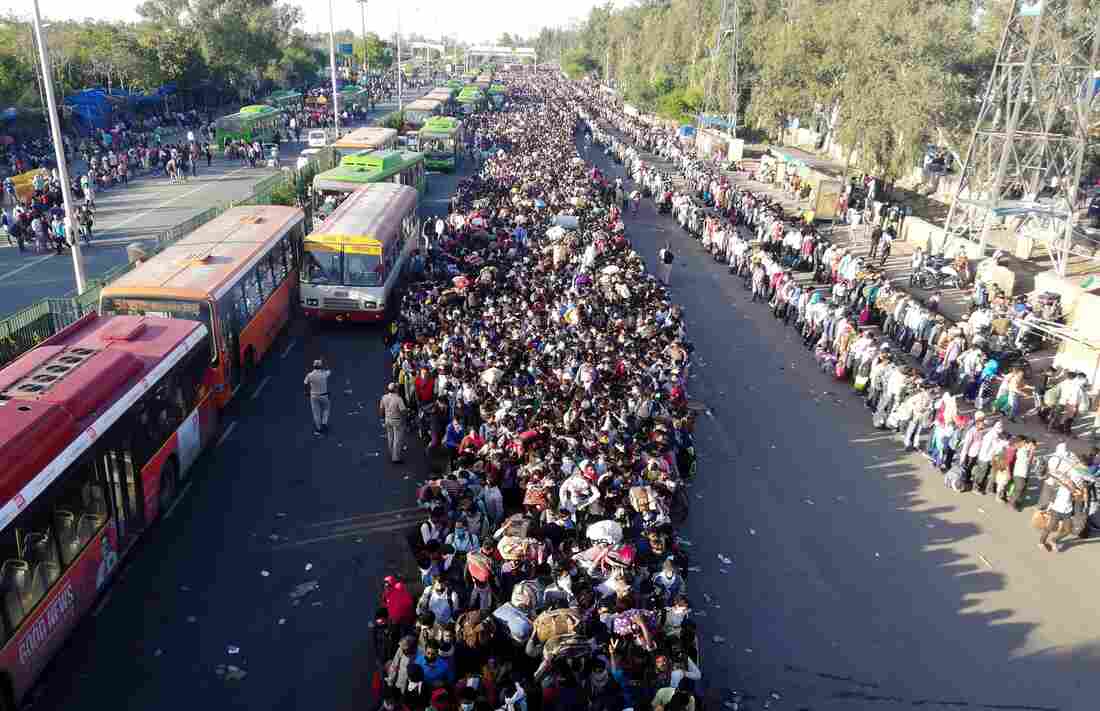 Migrant workers and their family members line up outside a New Delhi bus terminal hoping to board a bus for their villages. Millions have lost their ability to earn an income because of the government-imposed lockdown aimed at limiting the spread of the coronavirus. Bhuvan Bagga/AFP via Getty Images hide caption 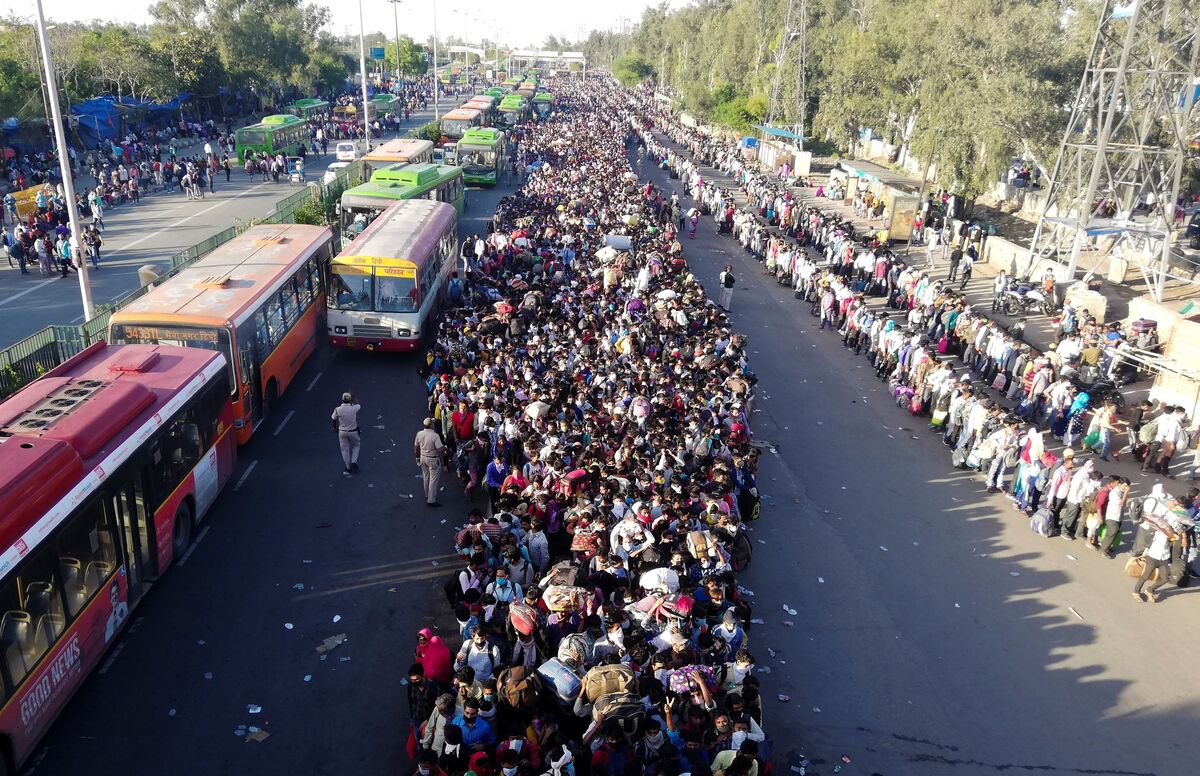 Migrant workers and their family members line up outside a New Delhi bus terminal hoping to board a bus for their villages. Millions have lost their ability to earn an income because of the government-imposed lockdown aimed at limiting the spread of the coronavirus.

Under lockdown, well-off Indians isolate indoors, work from home and get groceries delivered.

But outside their windows, it's a different story: Poor laborers amass in the streets, hungry and homeless.

In a video posted on Twitter, a woman calls down to a crowd of people gathering below her window. They yell back up to her, desperate: "There are 400 of us here without food. We need help. There are lots of children."

Emptied of most vehicles, Indian highways are instead lined with bedraggled, poor pedestrians, many carrying all their worldly belongings in bundles on top of their heads. Some cradle infants in their arms.

"I just want to go home," one man sobs to an Indian TV reporter. He says he's trying to walk from the capital, New Delhi, where he worked, to his home in the eastern state of Bihar — at least 600 miles away. 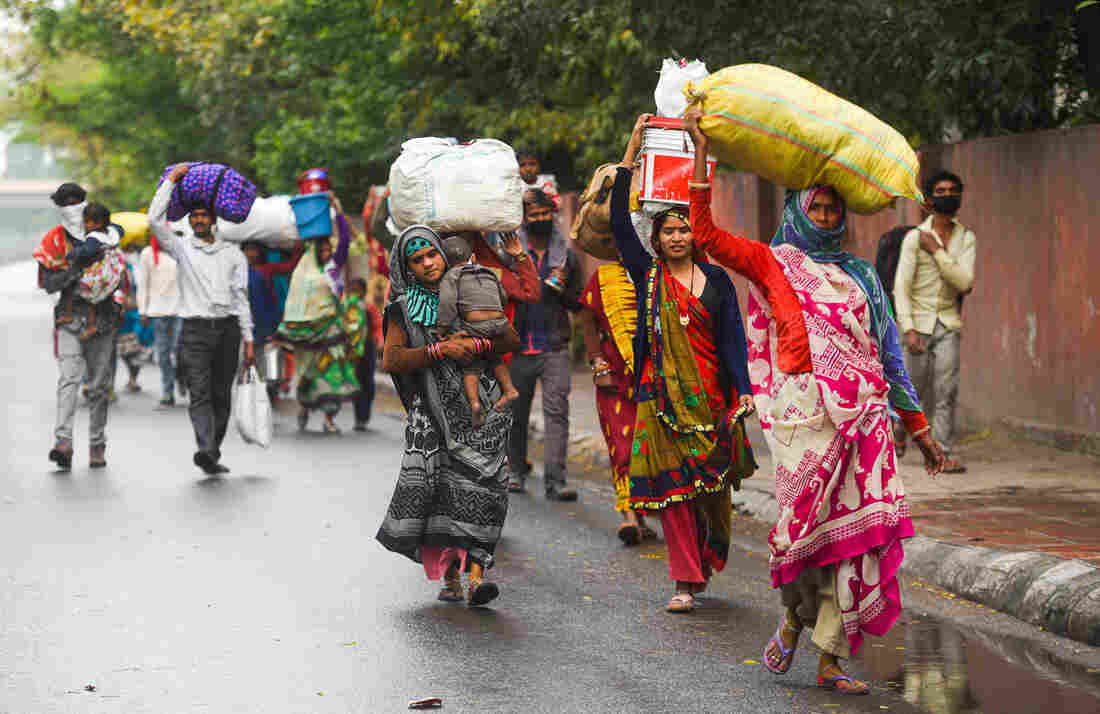 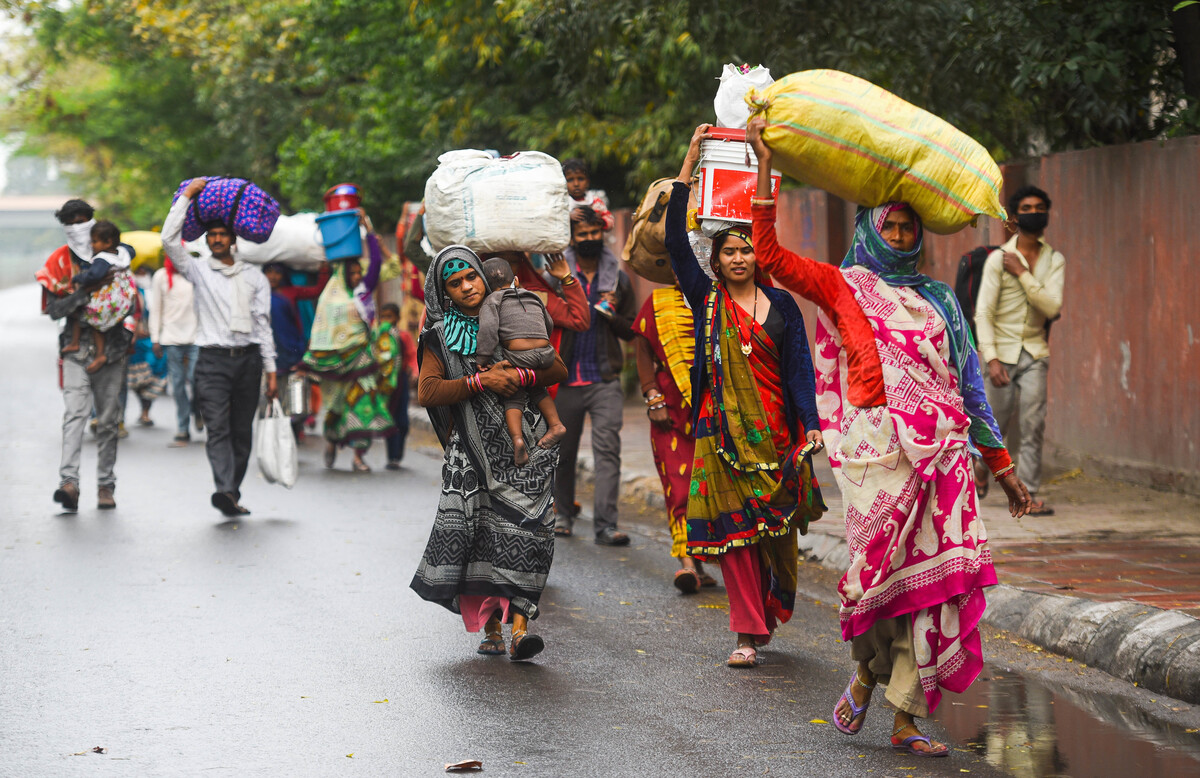 Even though the coronavirus toll in India appears to be low — the government is reporting about 1,200 active cases and 35 deaths in a country of 1.3 billion — Prime Minister Narendra Modi has imposed one of the world's strictest and biggest lockdowns, ordering all residents to stay in their homes for 21 days as of March 25, with a few exceptions for essential workers in hospitals, food shops and law enforcement.

The lockdown has left tens of millions of migrant workers unemployed. They're often from rural areas but live most of the year in India's megacities, serving as day laborers, construction workers or domestic help.

Most are thought to have no savings. Many lived in factory dormitories, now shut, and got stranded when the government halted bus and train service last week. They're vulnerable to starvation and infection.

Advocates for the poor say that while they support the lockdown to save lives, the way it has been rolled out — with apparently little guidance for the poorest of India's poor — may mean the lockdown itself endangers more lives than the coronavirus. 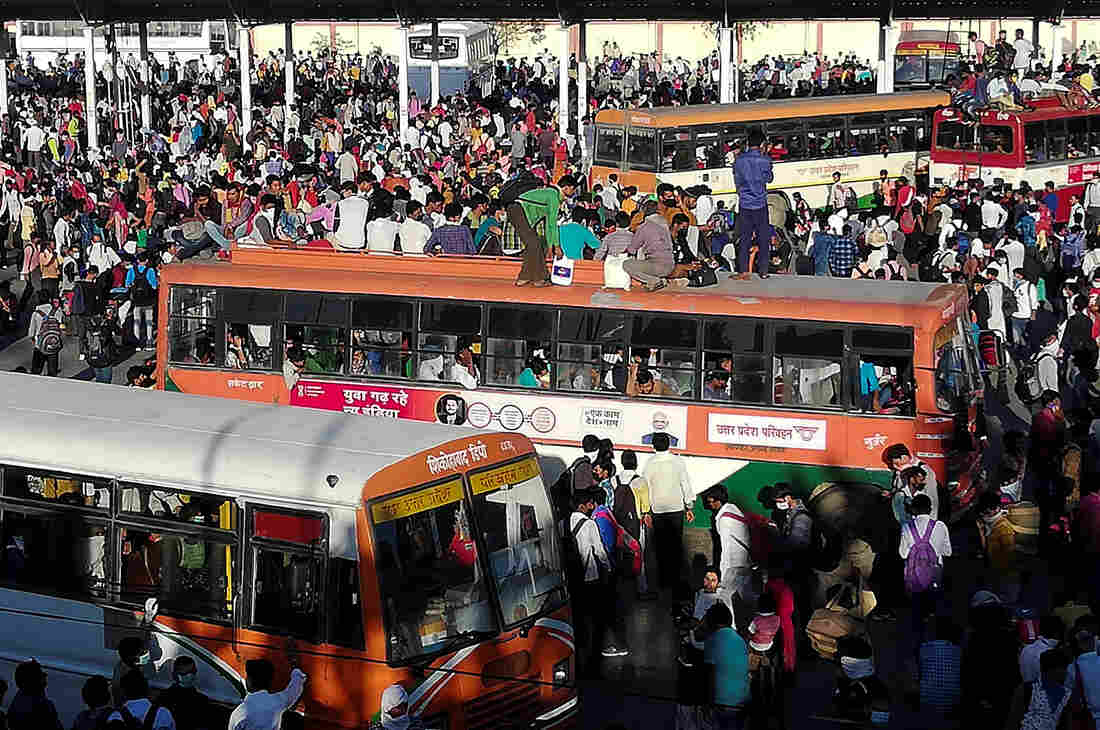 "The staying power of India's poor is very, very short. People like casual laborers, rickshaw pullers and migrant workers are basically living from hand to mouth at the best of times," Jean Dreze, a Belgian-born Indian economist, told NPR in a phone interview from his base in the eastern Indian state of Jharkhand. "Now suddenly overnight they are told that they have to spend 21 days inside their homes? Naturally, many of them are already running out of food."

Activists across the country have been sending videos of hardship to Anjali Bhardwaj, a food rights activist in New Delhi, who has been posting them on Twitter. "Heart-wrenching videos and pictures of people carrying their little ones on their backs and walking hundreds of miles to go back to their villages from cities like Delhi," she tells NPR.

"There needed to be much better planning for this kind of a lockdown," Bhardwaj says.

Many of India's migrant workers — who are believed to number at least 120 million, possibly more — are now trying to walk to their home villages, hundreds or thousands of miles away from the urban areas they'd migrated to for work. Dozens have been killed in road accidents en route.

All nonessential travel is banned under the nationwide lockdown. Buses and trains have been halted and airports shut down. "Scores of people who were trying to get back to their villages got stranded along the way because public transport was suddenly stopped," Bhardwaj says.

On a highway outside Delhi, a family walks with their 10-month-old child. "If we stay here, what will we eat?" a woman asks a TV reporter.

Last week, India's finance minister, Nirmala Sitharaman, announced more than $22 billion in coronavirus relief money. The government's top priority, Sitharaman told reporters, is "to reach food to the poorest of the poor, to reach money in the hands of those who need it immediately."

But many economists say that's not enough.

"We need a much, much larger stimulus — at least two or three times that amount," says Jayati Ghosh, professor of economics at Jawaharlal Nehru University in New Delhi. "And we need some clear indications that the government is worried about supply chains and how to maintain them." 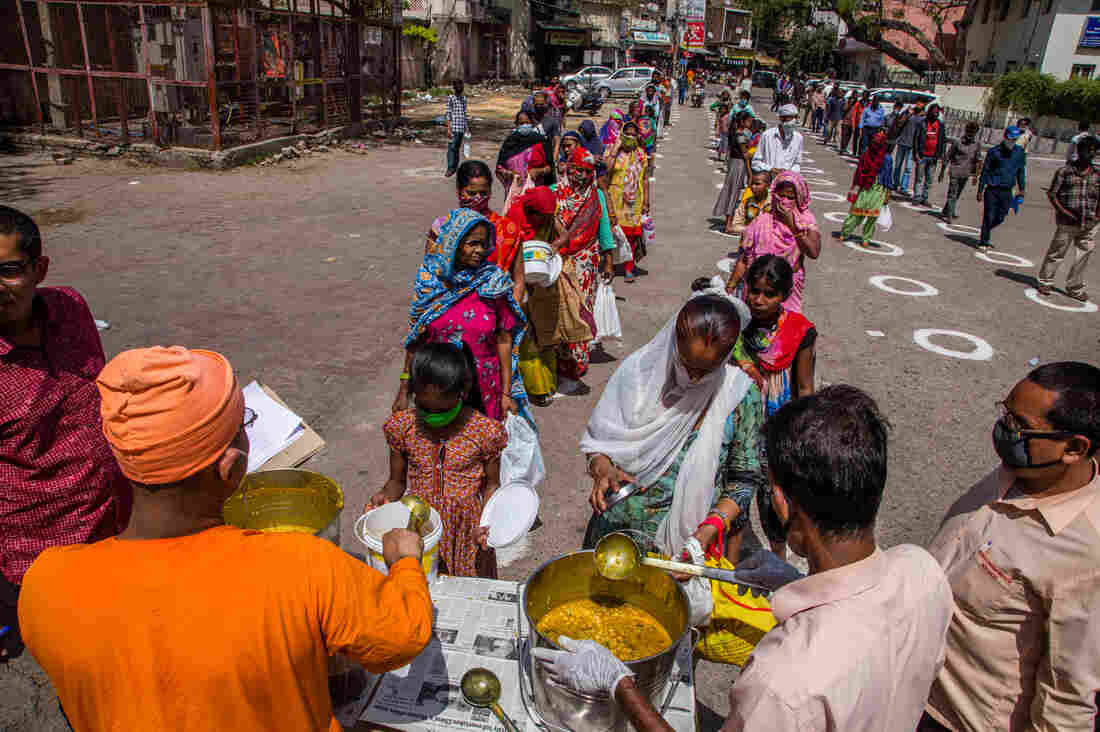 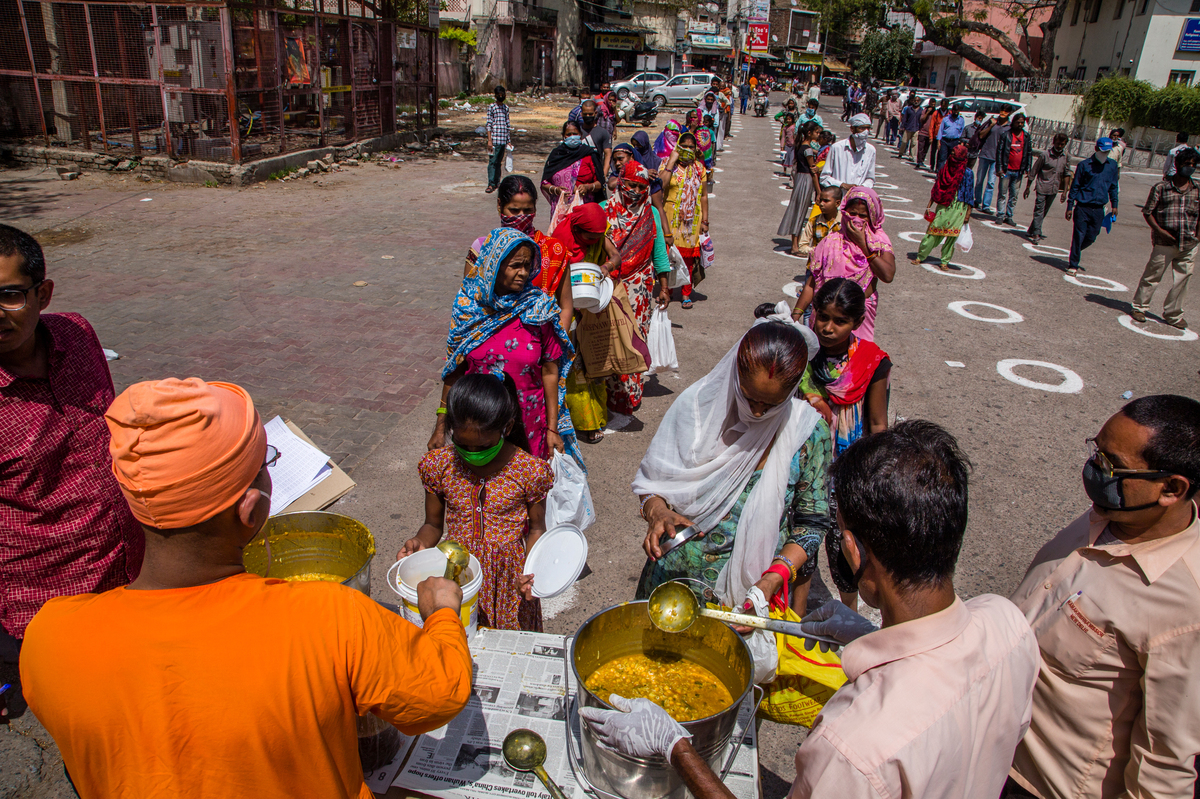 Disciples of the Hindu religious group known as Ramakrishna Mission distribute food to homeless migrant workers in New Delhi. They're standing in circles painted on the ground to maintain social distancing.

Any disruption in food supplies could be especially deadly for the poor. But India already runs the world's biggest food ration distribution system and also boasts the largest food stockpiles in the world. Government officials have said they have enough grain to feed the poor for at least one and a half years.

Dreze called on the Indian government to start releasing those stockpiles.

"The government could very easily open the warehouses and provide immediate relief to these migrant workers or anyone who is at risk of hunger," Dreze says. "But there is a lack of sense of urgency [in terms of food aid] and a tendency to hope that things will be OK and that the government can get away with a limited relief plan."

Ghosh, the Delhi-based economist, says the way India has responded to the global coronavirus crisis reveals "class bias." Authorities hosed down a group of migrant workers with disinfectant last weekend in the northern city of Bareilly, and sprayed soap solution on another group in the southern state of Kerala.

By contrast, Ghosh notes how the government has organized special rescue flights for Indian elites.

"There's been a lot of fanfare about bringing back Indians stranded abroad — a few relatively well-off people," Ghosh told NPR. "But these migrant workers, they have to go very, very long distances. They're not just vulnerable to hunger. They're also vulnerable to many diseases."

On Saturday, authorities in India's most populous state, Uttar Pradesh (population 200-plus million), announced a humanitarian gesture: The state would dispatch 1,000 buses to ferry these migrant workers home. Within hours, hundreds of thousands of people packed into Delhi's Anand Vihar bus station.

Police beat them with long sticks, trying to keep order. There was no social distancing.

The fear is that these migrants could spread the coronavirus from urban areas where they worked to rural areas — where there are not enough hospitals. With a fraction of the hospital beds and ventilators per capita of developed countries, Indian doctors and public health experts warn that an explosion of coronavirus cases could overwhelm their hospitals on a greater scale than what's happening in Italy and the United States — and lead to many millions of deaths.

Since the weekend, hundreds of makeshift soup kitchens and shelters have been set up to accommodate migrants remaining in cities. On Tuesday, India's Supreme Court ordered the government to ensure the safety of all migrant workers in transit.

In his weekly radio address Sunday, Prime Minister Narendra Modi apologized — particularly to the poor — for the chaos caused by India's lockdown.

"I made some decisions that caused you suffering, my poor brothers and sisters," Modi said. "But for a nation like India, this was necessary."

Many of the migrants traversing India this week say they realize the severity of the coronavirus crisis and respect the government's lockdown — but have no other option but to travel.

"I realize the police have stopped movement of people as a security measure," said a migrant worker named Bhanwarlal, who goes by one name. "But I have no other option. My family is alone, and now I have no work — so I can't send them any money." 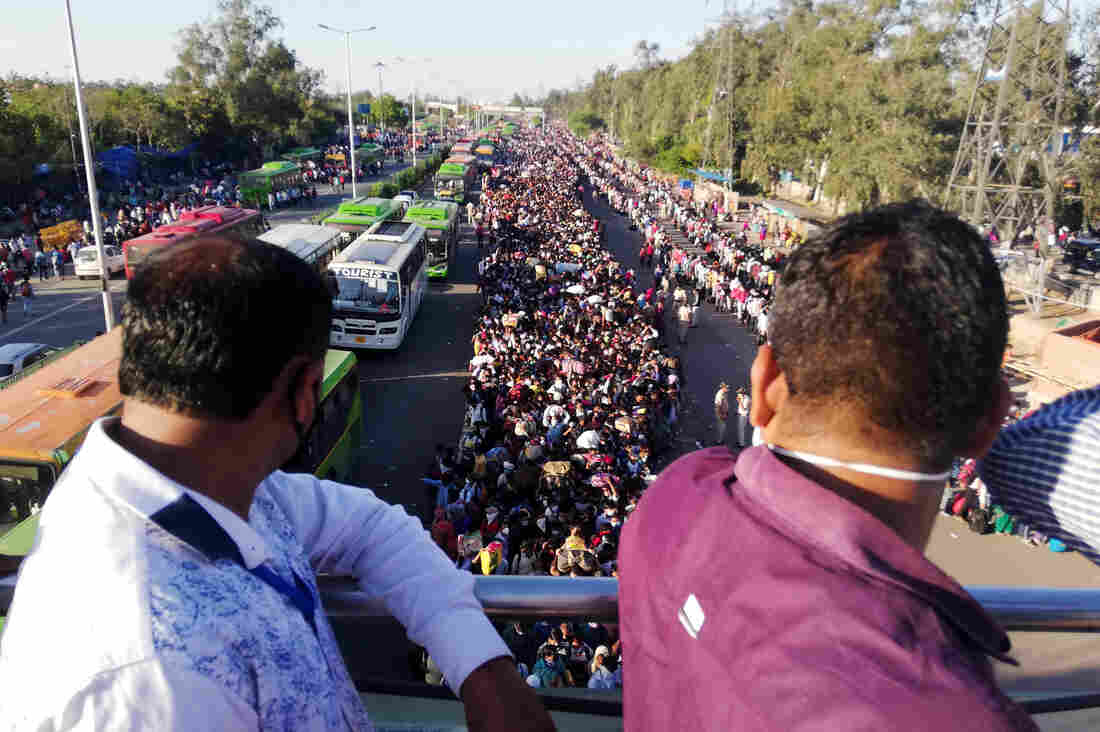 Migrant workers and their families in New Delhi hoping to get a bus ride to their home villages. Bhuvan Bagga/AFP via Getty Images hide caption

An Indian TV interview with Bhanwarlal has gone viral, transforming him into a famous "everyman" of this mass exodus. Originally from Rajasthan in northern India, Bhanwarlal had been working as a day laborer in the central Indian state of Madhya Pradesh and was recently injured on the job. His left leg was in a plaster cast.

On Tuesday, Indian TV filmed him sitting on the side of a highway outside the city of Bhopal, peeling bandages off his foot. He'd managed to hitch a ride for more than 300 miles, toward his hometown. But he had 150 more to go — on foot.