Accessibility links
PHOTOS: Coronavirus Kept People Out Of Beijing's Parks. Now They're Coming Back : Goats and Soda As restrictions are relaxed in parts of China where the coronavirus struck, residents in Beijing are cautiously returning to the public spaces they love. 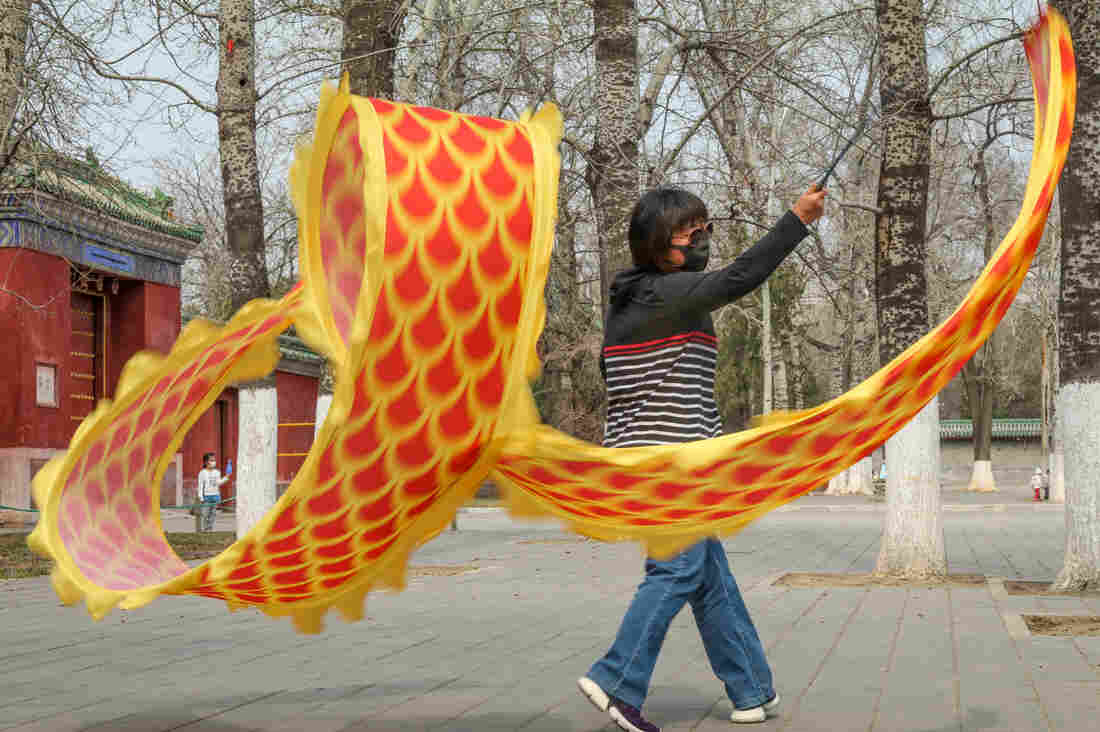 A woman dances while waving a silk ribbon with patterns that mimic dragon scales. At this park in Beijing and most other public places in China, people are still required to wear face masks. Amy Xiaomeng Cheng/NPR hide caption

Beijing's parks are an oasis in an otherwise dense and sprawling city. They provide a rare public space for people to ribbon dance, play checkers and practice tai chi. But in January and February, they were deserted. More than 80,000 people across China were sickened with the virus and strict quarantine measures locked down villages and cities, including Beijing.

Now, new case counts are dropping in China and, even though there is concern about a possible second wave of patients, some quarantine restrictions are being loosened. So Beijing's sun-deprived residents are turning out once again, — albeit carefully — with face masks and plenty of distance between park goers."

One of those residents is Xie Yuyin. We met her as she was hanging upside down from a tree in Beijing's Temple of Earth Park. 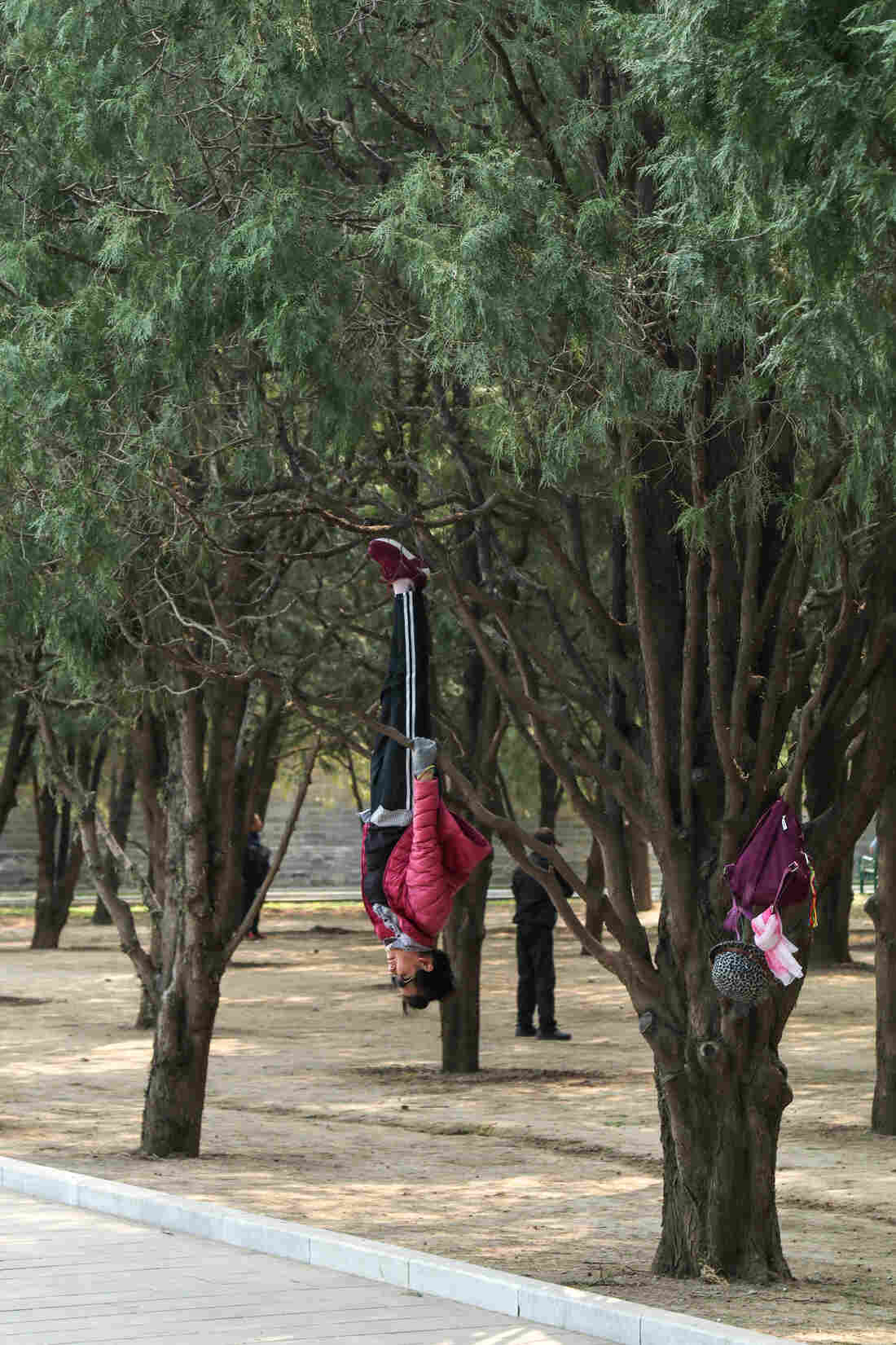 She insists she's not dizzy upside down — then practices a few acrobatic twists and turns — all while hanging by her hands from the branches. "Let me tell you, young woman, you just need to practice and you will be up here too," she tells me.

Now retired, Xie used to come to the park frequently. Then the coronavirus outbreak hit, and she shut herself inside for two months, like hundreds of millions of other Chinese residents. She was drawn back to the park only a few days ago as warmer weather hit the city.

As the outbreak of the new coronavirus is fading in China, the rhythmic thwack of Chinese hackeysack, or jianzi, is once again ubiquitous. Small groups carefully cluster more than 3 feet away from each other in the park, kicking the feathered jianzi to one another. 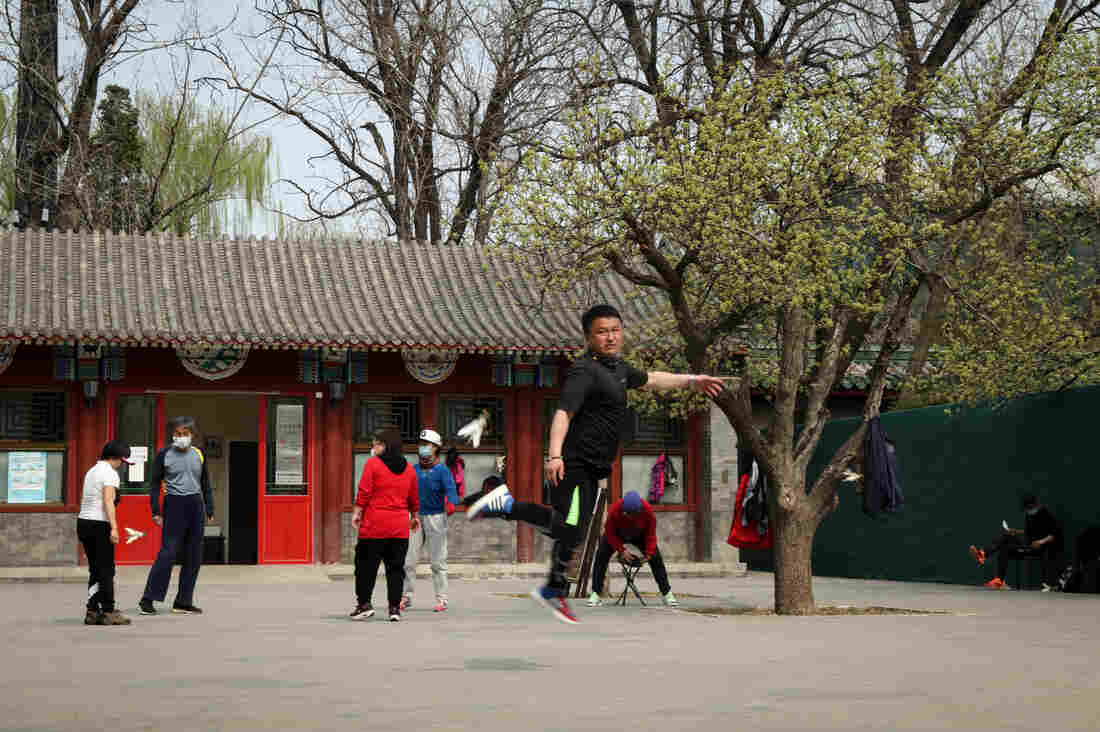 A skilled player of jianzi, or the Chinese equivalent of Hackey Sack, jumps to pass the feathered toy to the next participant. Amy Xiaomeng Cheng/NPR hide caption 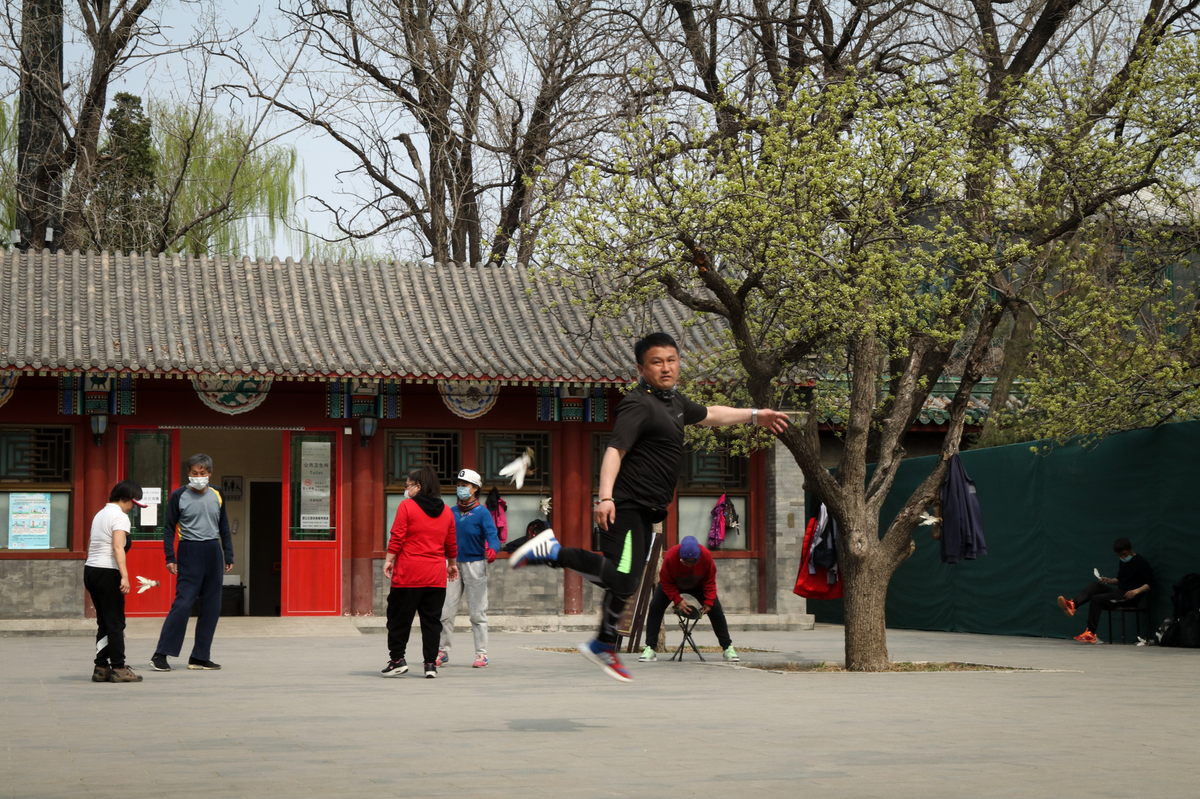 A skilled player of jianzi, or the Chinese equivalent of Hackey Sack, jumps to pass the feathered toy to the next participant.

One group is clearly the most expert. Their members unleash spinning kicks, deftly keeping the jianzi airborne.

A short walk away, under the eaves of a Ming dynasty style gazebo, 63-year-old Yang Jiancheng is strumming a ruan — an ancient, four-stringed mandolin-like instrument.

"You come to the park and play with whoever you want. You jam well with me, we play together. You jam better with another person? No problem!" he says. 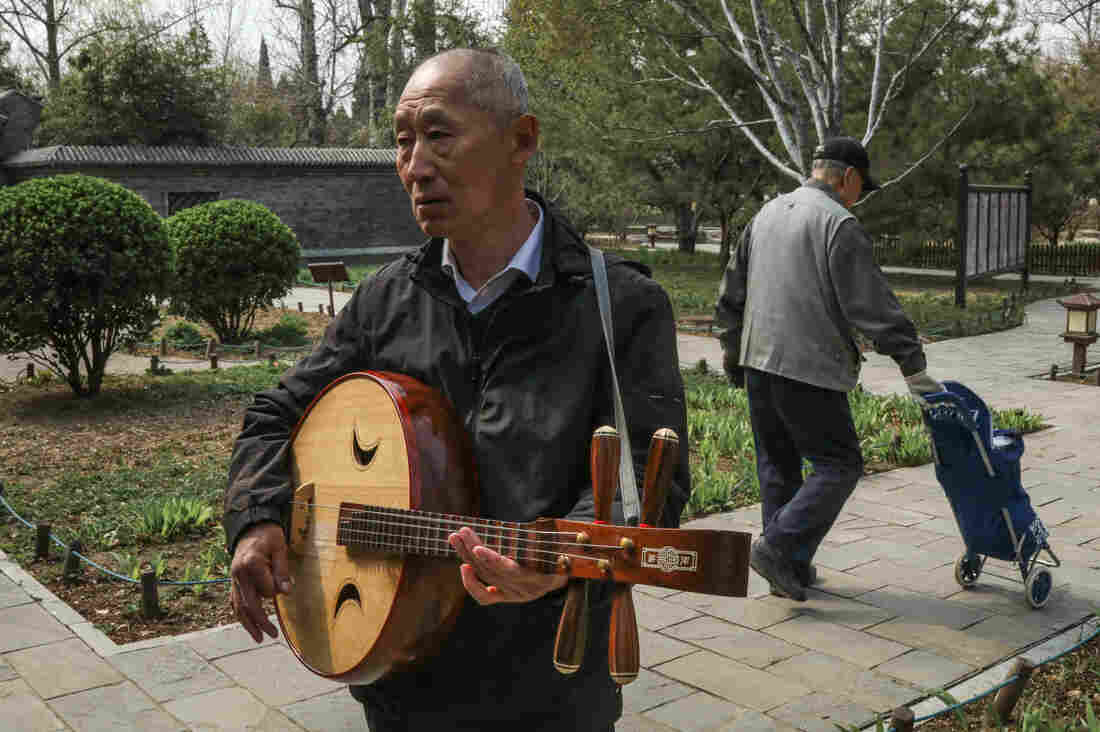 A troupe of singers sits near him, drowning out his strumming with operatic ballads.

Du Xin looks wistfully at the troupe. She used to sing regularly with them at the park, but today she carefully stands a good 10 feet away and sings to herself through a face mask.

Du says she learned many of the songs by ear during the violent upheaval of China's Cultural Revolution during the 1960s and '70s, when politically sanctioned ballads were played on loudspeakers day and night. 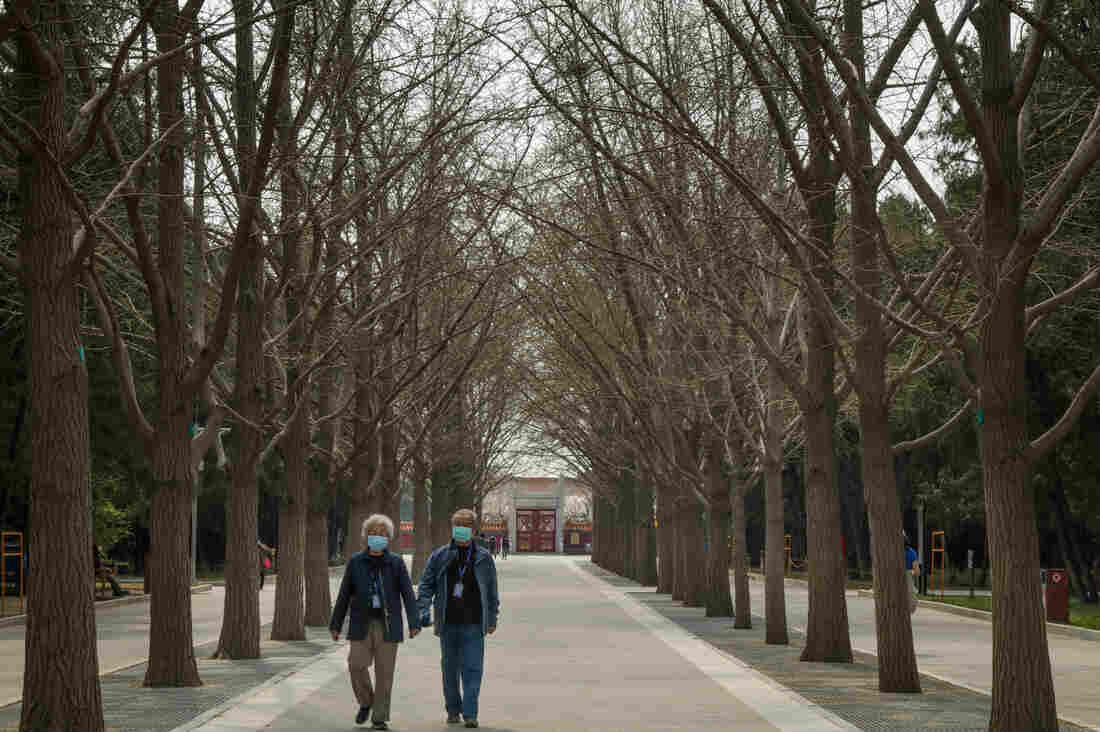 Ditan, or the Temple of Earth, is one of Beijing's four major religious sites, used during imperial times for ritual offerings to the heavenly gods. Now, these sites are public parks visited by residents and tourists alike. Amy Xiaomeng Cheng/NPR hide caption

Today, Du sings a more modern aria from the Chinese epic, "Dream of the Red Chamber." The song is about a sickly young woman gathering dying blossoms for burial.

"The lyrics are so tragic but they're so beautiful," she says. Du likes the emotional ballads the best because, she says, "singing about difficult experiences gives me considerable insight about myself."