Accessibility links
How Young People Around The World Are Coping With Social Distancing : Goats and Soda Gen Z has been criticized for not taking social distancing seriously. We talk to teens and people in their early 20s around the world about why they're staying home — and how they're staying sane.

Gen Z Under Lockdown: How They're Coping, From TikTok To Virtual Drinks

Gen Z Under Lockdown: How They're Coping, From TikTok To Virtual Drinks 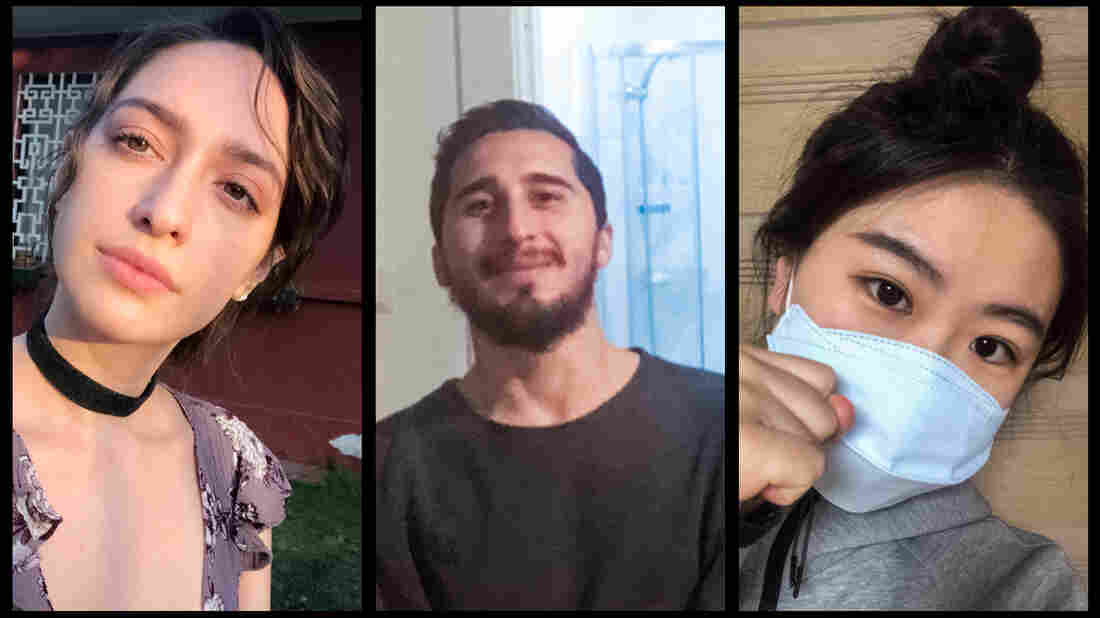 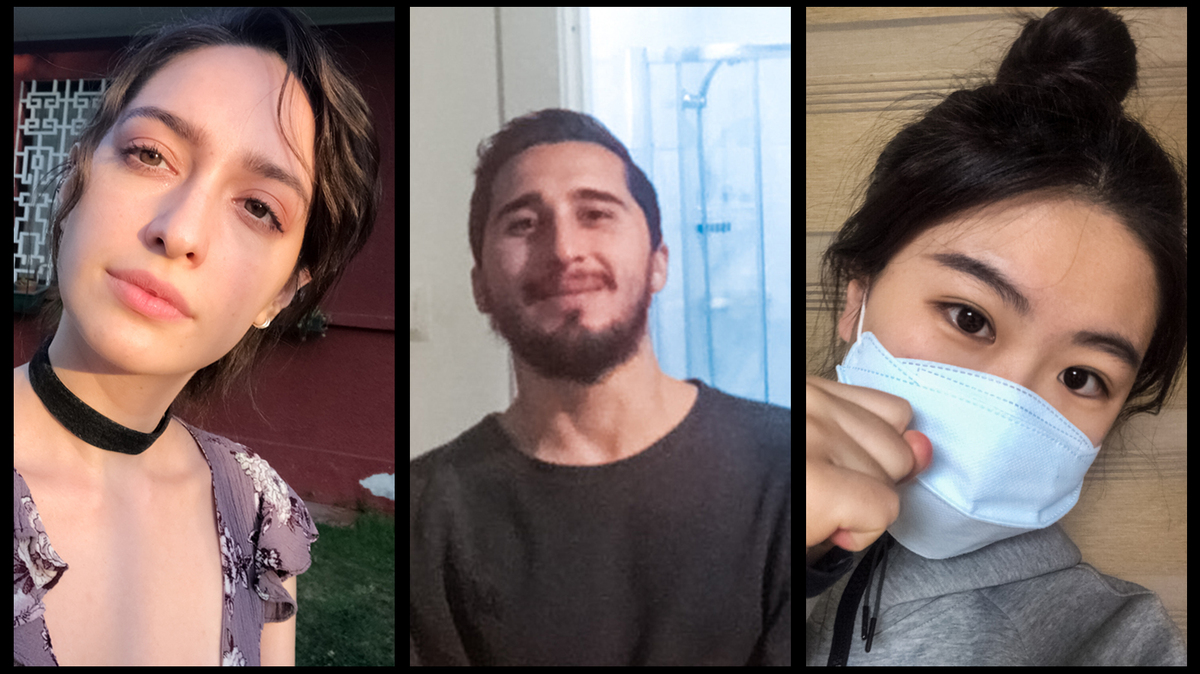 Since the beginning of the coronavirus pandemic, young people have been heavily criticized for not taking social distancing seriously. They've traveled for spring break, hung out at bars and restaurants and continued going to each other's houses despite warnings that the virus could spread through close contact.

Many young people said they didn't take precautions at first because they are young, healthy and run a lower risk of dying from the disease than those who are older or immunocompromised. But data shows that COVID-19 affects all age groups, and even though their own risk may be lower, young people can still spread the virus to more vulnerable populations.

But there are members of Generation Z — roughly ages 14 to 24 — who have changed their minds and embraced self-isolation. Now they're trying to cope with the new reality of life under lockdown — and are happy to share their strategies with other Gen Zers. We spoke to young people from Asia to Europe and Latin America about what they're doing to get through the lockdown — making TikToks, learning family recipes and bonding with roommates.

'It's not just you that's going through this'

In the early days of South Korea's COVID-19 outbreak, 20-year-old Jung Dain still hung out in pubs and cafes with her friends in the city of Daegu.

"When South Korea had its first patient in late January, I thought I was healthy enough to be spared. I continued to go out until Feb. 18, ignoring social distancing," she says.

Then things took a turn as the number of cases mounted. Government officials shut down schools and large gathering spaces to keep the virus from spreading.

Realizing the gravity of the situation, Dain stopped leaving her house on Feb. 19. She says she was bored at first, spending most of her time flipping through TV channels or participating in social media challenges, like one for making frothy dalgona coffee by whipping instant coffee with hot water and sugar until it reaches the perfect creamy consistency.

The start of a new university semester online — which came with its own share of technical difficulties — has helped her get into a routine, but she says it's still a struggle to be trapped inside most of the time.

"It may be hard in the first weeks," she says to those living in countries that are still in the early stages of isolation. "But it's not just you that's going through this — it's everyone. Try to fight boredom with video calls with friends."

She takes short walks alone at night for fresh air — while wearing a face mask — and sees her friends through Instagram video calls. They all toast their screens with their own drinks until they can meet up in person again.

'We will overcome this crisis if we care for each other' 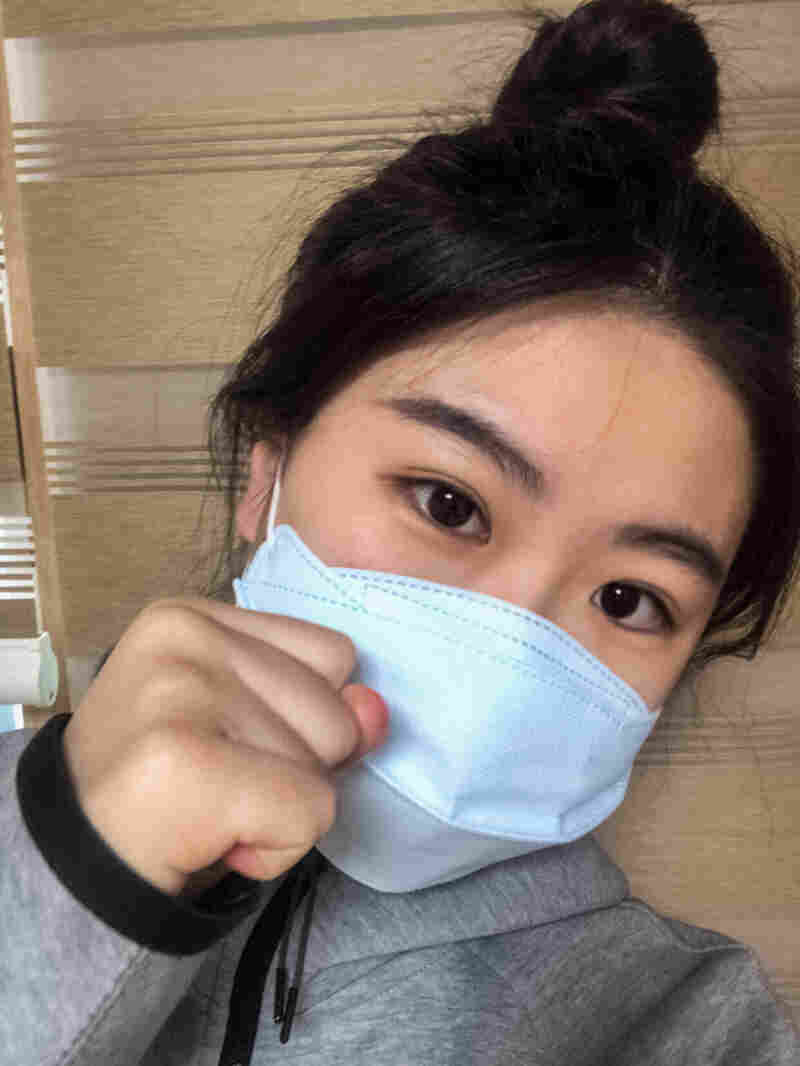 Shin Chai-mi, who also lives in Daegu, is now focusing on her studies. The 17-year-old says her "cram school" — a specialized school that prepares its students for university entry exams — switched to online lectures in early March. For the past month, she's reorganized her study routine to follow the order of subjects on college entrance exams rather than the order she takes her classes in. She's also spending more time with her parents, who get home from work earlier these days since there are fewer customers at their laundromat.

Sometimes, she goes on walks through her neighborhood with a friend to admire nature, like the cherry blossom trees that recently bloomed near her house — but she misses wearing nice outfits to leave the house every day, singing karaoke with her friends and being able to enjoy her days off from school on her own terms.

She says the disruption to her life made her angry at first but then going online put things into a positive perspective.

"I saw on social media that students were sending thanks to medical workers and restaurants struggling to keep their business afloat were sending food to hospitals. It made me feel a sense of community that's stronger than fear or feeling of powerlessness," she says. "It made me hope that we will overcome this crisis if we all take precautions and care for each other."

'I can't wait to go back to school' 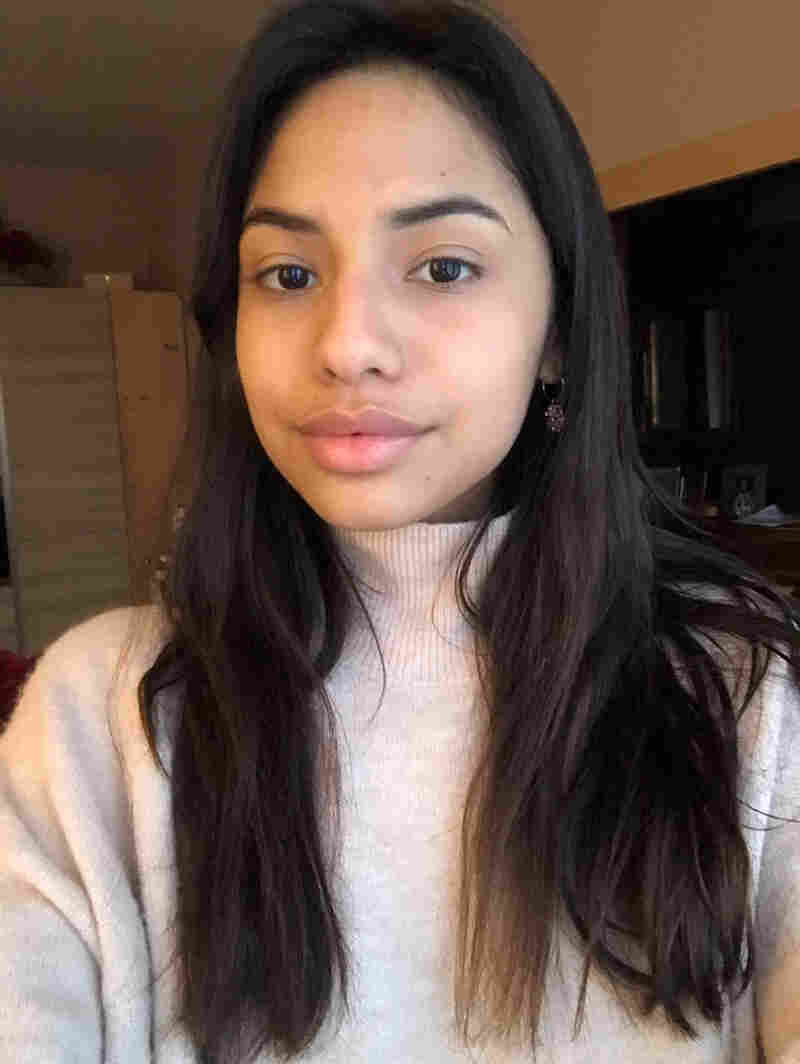 Valentina Rosas, who lives in Ferrara, Italy, says she and her friends treated the first week without school in late February like a vacation — they kept taking the train to go hang out at bars downtown. The 17-year-old says she initially made the mistake of thinking that a pandemic in China was too far away to affect her everyday life. Then COVID-19 cases soared in Italy, with more than 16,500 deaths caused by the virus by early April.

A couple of weeks ago, Rosas experienced a particularly sobering moment. While laying on the couch, she heard something outside her window and went to see what it was. She says three military trucks full of coffins — carrying people who died from the coronavirus — drove down her street. The bodies were on their way to be cremated outside populated cities whose crematoriums are overwhelmed by the high volume of deaths.

Rosas says it made the disease all too real — not only how it is claiming lives but also preventing those affected by loss to come together because it could put them at risk for infection.

"I never thought I'd be seeing something like that, especially at my age," she says. "People can't bury their loved ones or say goodbye properly or grieve with their friends and family."

Now that she's been home for more than a month, she says it helps to see the quarantine as time to do the things she usually pushes to the back of her to-do list, like deep-clean her room and learn her mom's recipes for panna cotta and ravioli made from scratch.

"I can't wait to go back to school. I never thought I would say that," she says. "Once this is all over, I want to just go to a park and sleep under the stars for an entire week."

'This is the invisible war of our generation' 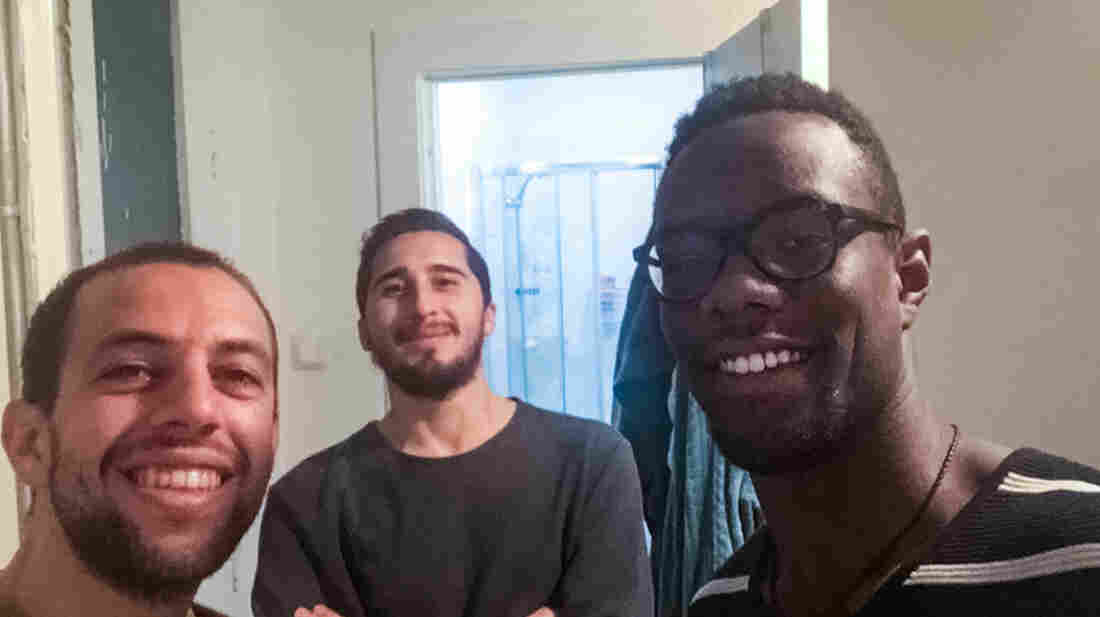 Gianluca Gulotta and Simone Di Benedetto, both from Italy, moved into a small apartment in Madrid in early March with Kendall Galbreath, who is from a suburb outside of Atlanta. The college students thought the size of the space wouldn't matter because they'd all be out working, studying and getting to know the city in their free time. Then their internships and classes got canceled or moved online — and they found themselves locked inside together for an indefinite amount of time.

With Spain reporting more than 131,600 cases as of early April, Gulotta, 23, and Di Benedetto, 24, considered going back to Italy to wait the quarantine out with their families. But they say it was their "civic responsibility" to stay put and avoid any further spread of the virus through travel.

"I think about not just older people but also other people who rely on the medical system, like pregnant women. The more we go out and spread the virus, the less resources available for them when they need to go to the hospital," Gulotta says. "It oversaturates the system."

Since they can only leave home to go to the grocery store or pharmacy, the three roomies miss being able to go on runs, practice their Spanish with the locals and fully enjoy their culture exchange experience. But now, they say, they're bonding in unexpected ways. Teaching Galbreath a little Italian, cooking together, working out indoors and watching Netflix has become their new norm.

"This is the invisible war of our generation," Di Benedetto says. "Our elders had to get guns and go out and fight — we're just being asked to stay home. It's not that hard." 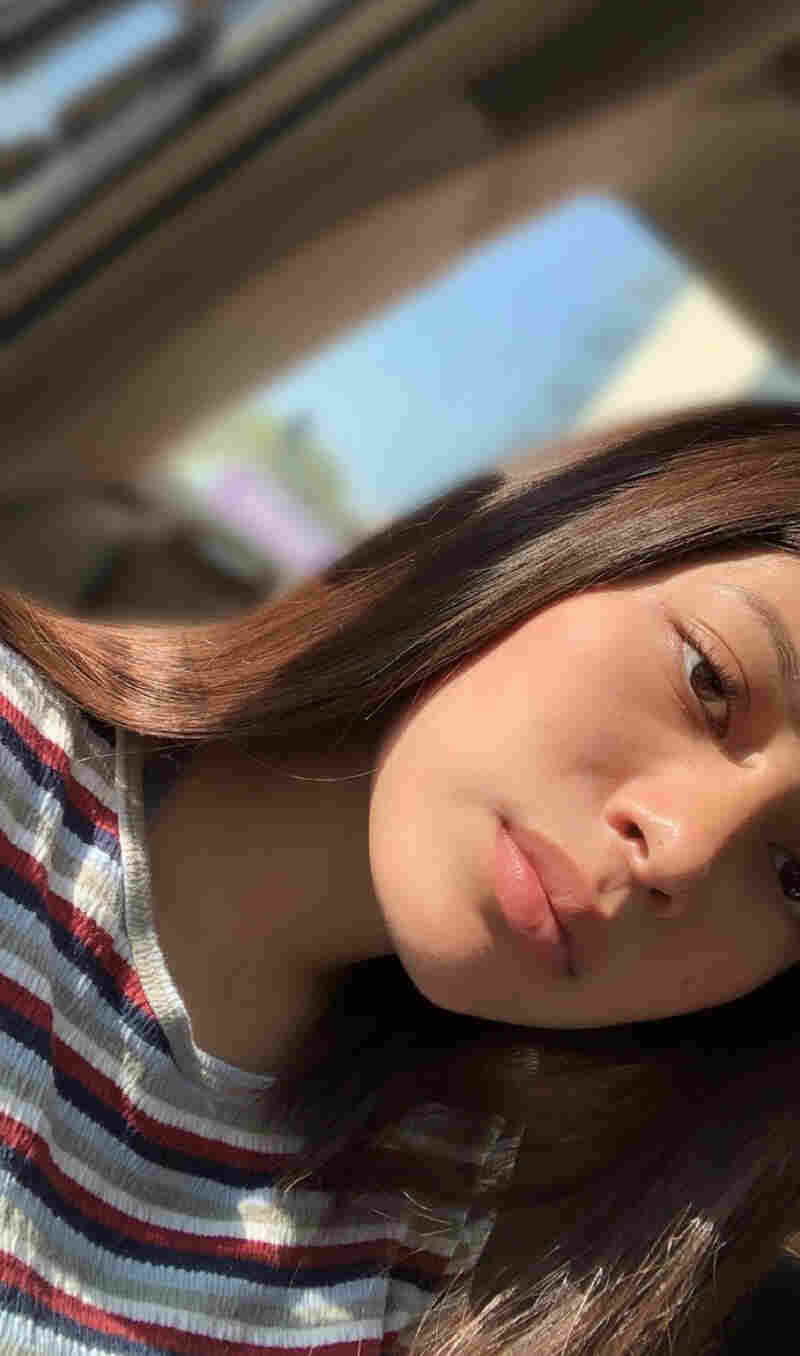 Paulina Meléndez Hernández of Mexico City used to go to reggaeton concerts, CrossFit classes and volleyball games with her friends — but she started staying home in mid-March, more than a week before President Andrés Manuel López Obrador officially advised people to stop going out. As of early April, Mexico has more than 2,000 cases.

Without her regular extracurricular activities, she's building a new hobby: her TikTok profile, which now has over 8,000 followers.

"It's a really fun app for learning new trends and challenges, as long as you don't do anything that harms your integrity or mental health," she says. "Most of my content is comedy, since I like when people comment that my post made them smile or they like my videos."

Her page includes everything from a parody of the popular Doja Cat "Say So" dance to a video of her poking fun at how her classmates are stressing over online homework while she spends the day making TikToks — but, she clarifies, she's getting her assignments done between posts, too. 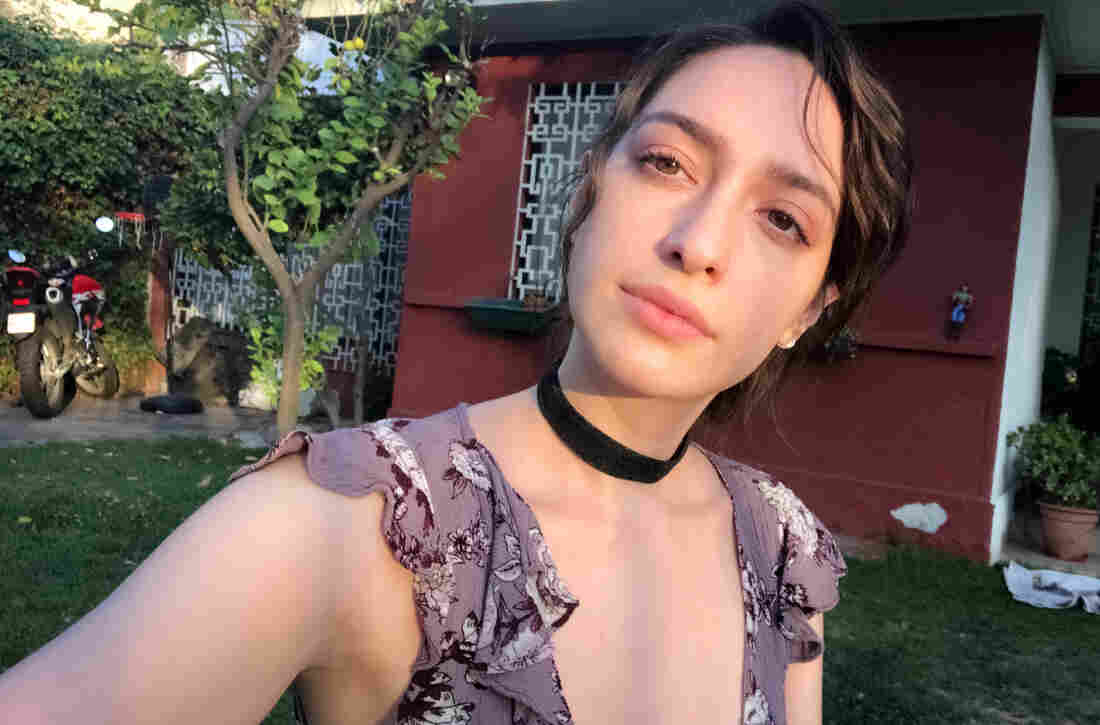 Valentina Constanza Cerda Aravena is also on TikTok, which she says helps give her mind a break from the never-ending news cycle. The 22-year-old stopped leaving home on March 18, a full week before the Chilean government enforced a quarantine on several areas of Santiago following more than 1,100 confirmed COVID-19 cases in the country. By early April, there were more than 4,800 cases.

Aravena's comedic skits on the platform have become a way for her to stay busy for the past two weeks of social distancing. She posted a scene in which she and and her neighbors holler back and forth to each other from their windows, a clip of cutting her own bangs and a rant about how annoying it is when people mix up the spelling of words that sound the same.

"It brings out the creativity in a lot of people," Aravena says. "I'm someone who's 100% inclined toward art, and it's so great to see that the world is leaning on that right now to stay sane and calm."

The university student and Harry Styles superfan admits she's dealt with her fair share of anxiety in the midst of the pandemic, especially as she wraps up her undergraduate career. But she tries to keep a positive attitude and remind her friends — both online and offline — that things will get easier with time.

"I also just really want to thank doctors and medical professionals working tirelessly to help those who have been infected, as well as anyone else still working to make sure we have food and sanitation services," she says. "They deserve more than millions of rounds of applause," she adds in reference to the videos of people clapping from their homes to show their gratitude to health care workers.