Accessibility links
Will Transmission Of COVID-19 Be Slowed By Summer's Heat And Humidity? : Goats and Soda Experts consider the effect of humidity on the virus and the method of transmission as they keep an eye on where the disease spikes next. 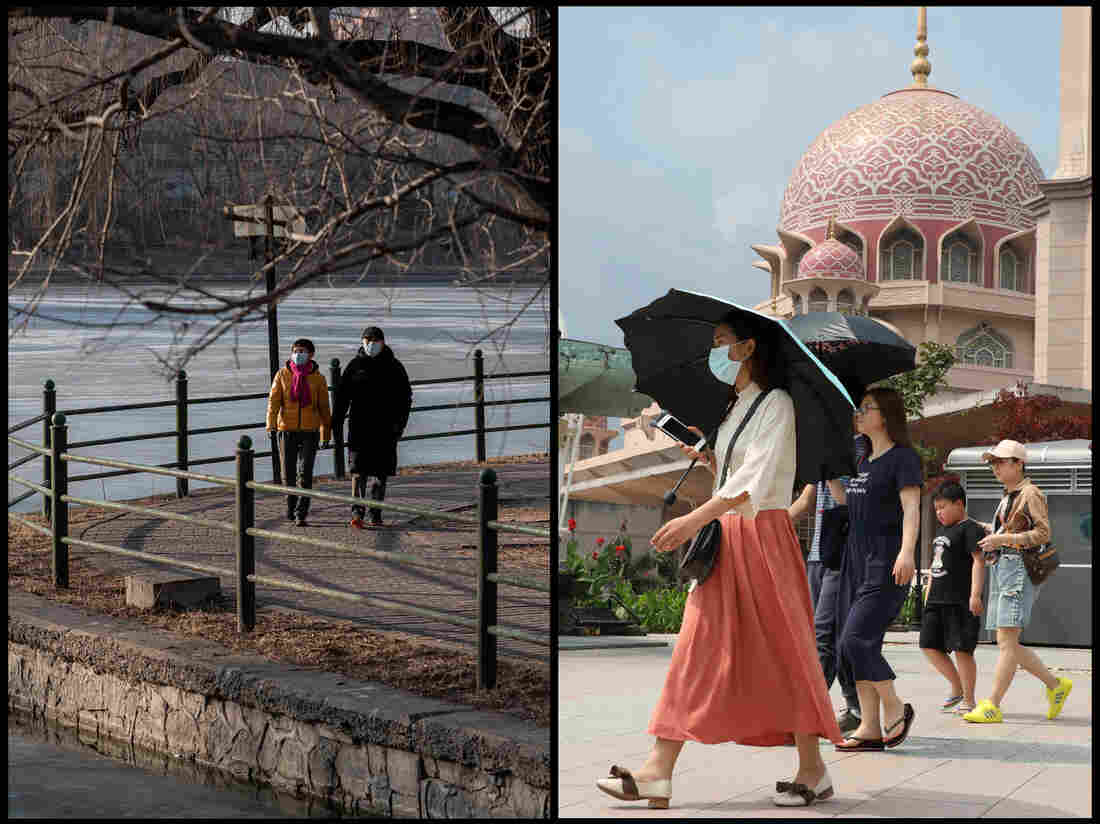 The coronavirus outbreak began during the cold of winter in Wuhan, China. Scientists are asking if heat and humidity in countries like Malaysia (right) — and in regions where summer is soon starting — could slow transmission. Nicolas Asfouri/AFP via Getty Images; Lim Huey Teng/Reuters hide caption 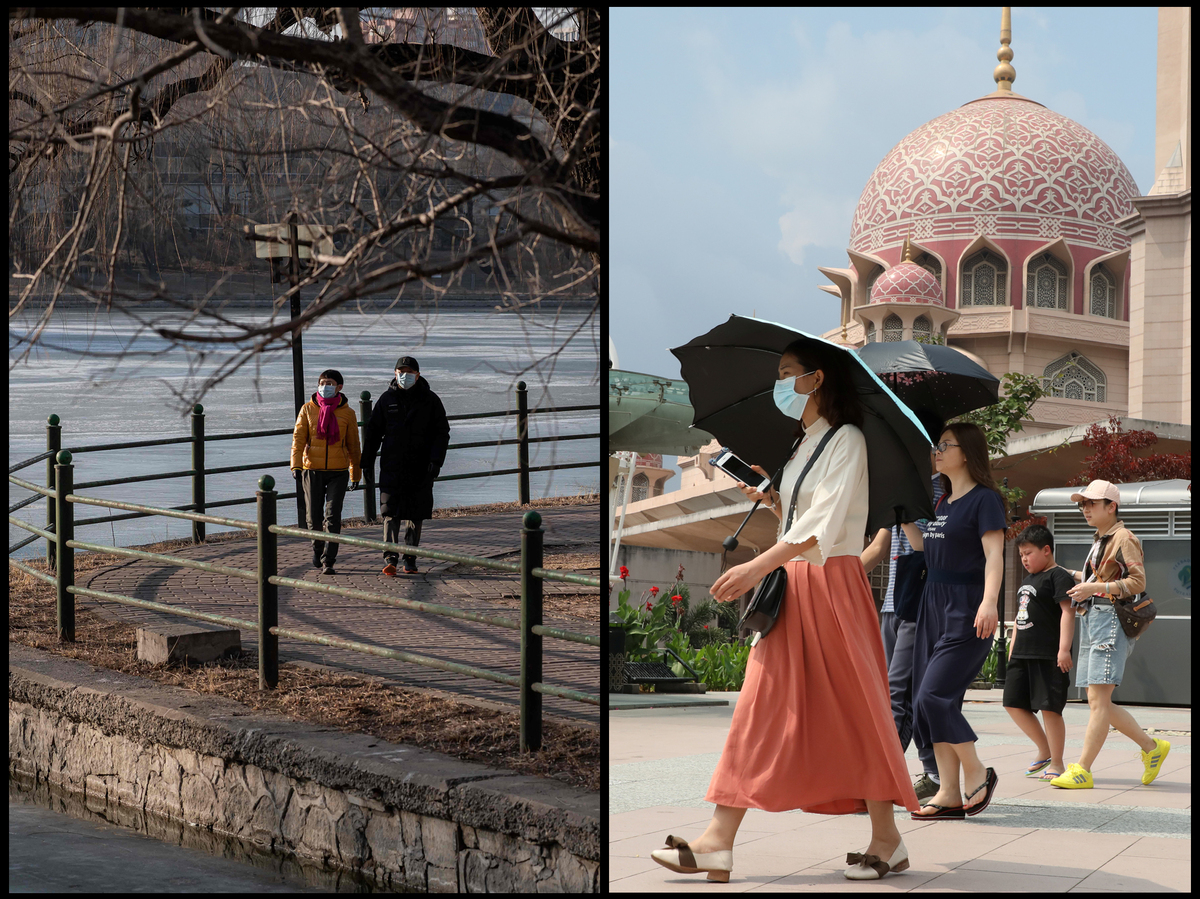 The coronavirus outbreak began during the cold of winter in Wuhan, China. Scientists are asking if heat and humidity in countries like Malaysia (right) — and in regions where summer is soon starting — could slow transmission.

The worst outbreaks of COVID-19 so far have been in colder parts of the Northern Hemisphere during winter or early spring. Will warmer weather slow the transmission?

Could the Southern Hemisphere see outbreaks intensify as that part of the globe moves into winter?

And is it possible that transmission might be naturally interrupted as it is each year for the seasonal flu?

These are some of the key questions about COVID-19 that scientists are trying to answer.

"The seasonality of flu and other respiratory viruses has been known for hundreds of years, if not thousands," says Akiko Iwasaki, a professor of immunobiology at the Yale University School of Medicine. "During the winter months, we tend to have a surge in the cases of respiratory infection, including the influenza viruses."

There are a number of factors that contribute to why the flu arrives in the winter, but Iwasaki says the primary factor is the relative humidity of the air. In winter, the drop in the amount of water vapor in the cold, dry air makes it easier for viruses to become airborne.

This makes what Iwasaki calls the "perfect setting" for respiratory viruses to transmit.

"When you cough or sneeze or even talk, you're generating these droplets that are coming out of your mouth," she says. "And some of them, if you're infected, will contain virus particles. In very arid conditions, those particles lose the water vapor and they become airborne." This allows the virus to persist in the air for a long time, much longer than in summer.

Of course, she's talking about traditional cold and flu viruses that have been studied for years.

The question is whether the new coronavirus will also behave this way.

But for this to happen, there has to be airborne transmission.

The World Health Organization and the U.S. Centers for Disease Control and Prevention in their guidance on SARS-CoV2 downplay airborne spread, saying instead that the primary form of transmission is by "large respiratory droplets."This debate – airborne vs. droplets — is a crucial divergence in thought when it comes to figuring out if COVID-19 is going to be seasonal. If the primary form of transmission is airborne, then the novel coronavirus could become a seasonal disease. If it mainly spreads through "large respiratory droplets", then seasonality is less likely.

The transmission through "large respiratory droplets" works this way. When an infected person sneezes or coughs, virus-laden spittle flies out into the air. The particles, which may even be big enough to see, don't go very far: WHO estimates they travel about 3 feet before dropping onto surfaces directly around the infected person.

According to this model, if a person with COVID-19 is eating at restaurant, they're far more likely to infect someone at their table than someone across the room.

So if the new coronavirus primarily spreads this way on large droplets, seasonality may not matter.

Studies out of Asia have documented this type of spread among people in close contact to one another.

And in 2003, another deadly coronavirus that's closely linked to SARS-CoV 2 —the offical name of the current coronavirus — severe acute respiratory syndrome is believed to have spread primarily through large droplets.

But researchers in the U.S. have aerosolized the novel coronavirus in laboratory settings – mechanically spraying virus into the air so that it floats. They found it can remain in the air for more than an hour. At certain temperatures and humidity levels, they've seen in preliminary results that aerosolized particles can remain suspended in the air even longer than some flu viruses.

WHO agrees that the new coronavirus can be aerosolized, especially during some invasive medical procedures, but the global health body insists this isn't a primary form of transmission.

"I would be quite surprised actually, if this novel coronavirus isn't aerosolized," she says. "Why would it be different from other types of respiratory viruses?"

But other researchers caution against assuming that any new virus, regardless of how it spreads, will follow a seasonal pattern.

"With a new virus coming into the population, everybody is susceptible," says Anice Lowen, an associate professor of microbiology and immunology at Emory University. She notes that no one has had a chance to develop immunity: "Everybody is sort of fair game for an infection [from] that virus. So it makes the virus transmit much more readily, such that it may continue to transmit even when the climactic conditions ... or the season ... is not optimal for transmission."

She says this new coronavirus may well continue to spread straight through the summer here in the U.S..

Lowen points out that when the H1N1 influenza virus emerged in 2009, it didn't start in winter the way the seasonal flu does.

"The 2009 pandemic started in April and May," she says, "well outside the normal seasonality."

Eventually the H1N1 virus did fall into a more traditional seasonal pattern, but it took several years.

Ben Cowling, an epidemiologist at the University of Hong Kong, also says higher temperatures haven't seemed to have stopped the spread of this virus.

"What we've seen in Southeast Asia is that there was heavy seeding of infections [from China] into Thailand, into Malaysia, Indonesia and some other places which are relatively hotter," he says. "And it looks at the moment like spread of infection has been a little bit slower in some of the hotter countries than in the cooler countries. So my interpretation is there's a little bit of seasonal pressure, perhaps reducing transmission by 10 percent, but that's not nearly enough to stop an epidemic from occurring when we have such a high basic transmissibility."

Even in the U.S. Southern states like Florida and Louisiana have been hard-hit along with colder states like New York and Michigan.

But the worst outbreaks so far globally have been in cooler locations. So as the Southern Hemisphere moves into winter, researchers will be watching closely whether transmission of SARS-CoV 2 increases in South America, Africa and Oceana as the temperature drops.