Accessibility links
The New Rules For Coronavirus Mourners In Wuhan Have Angered Many Residents : Goats and Soda Zhang Hai's father died of the coronavirus on Feb. 1 and was cremated. Ashes can now be picked up, but the government requires a chaperone for visits to the crematorium as well as for burials. 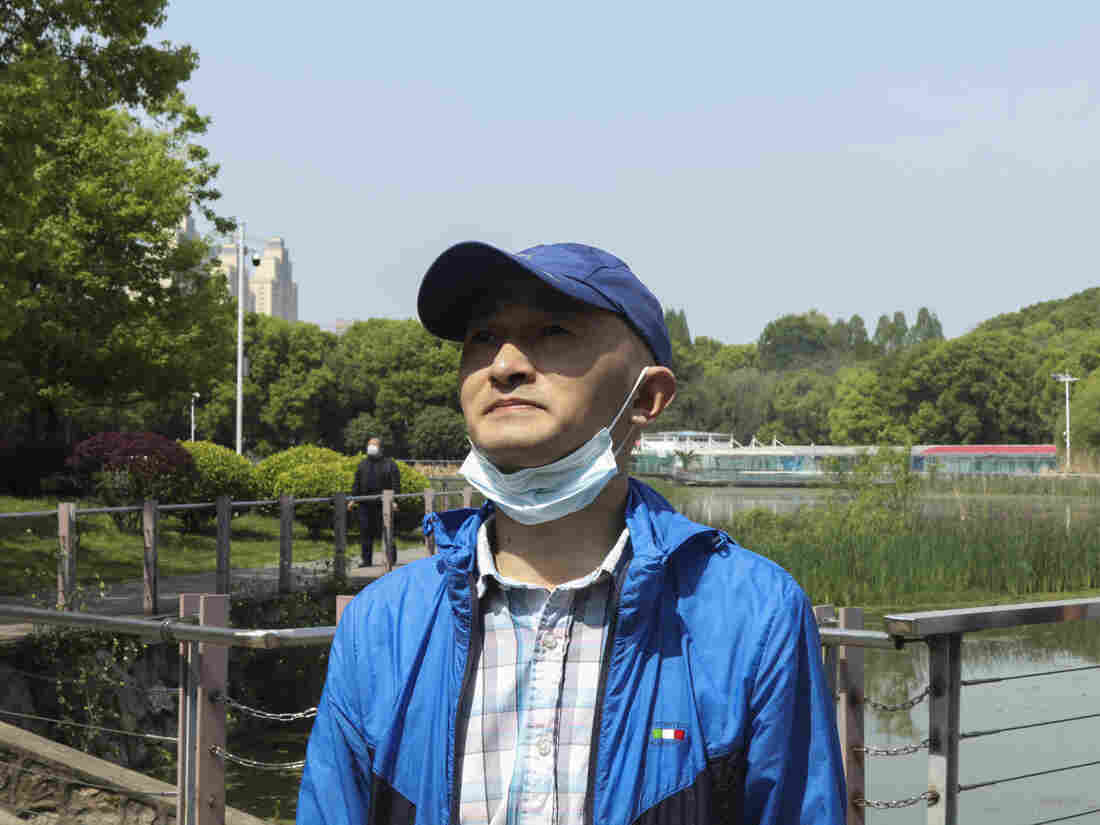 Zhang Hai stands on a bridge where he took his father out for a walk only about four months earlier. His father died of the novel coronavirus on Feb. 1. "The scenery is still here, but the person is gone," he sighs. He says he frequently comes to this park "looking for memories." Amy Xiaomeng Cheng/NPR hide caption 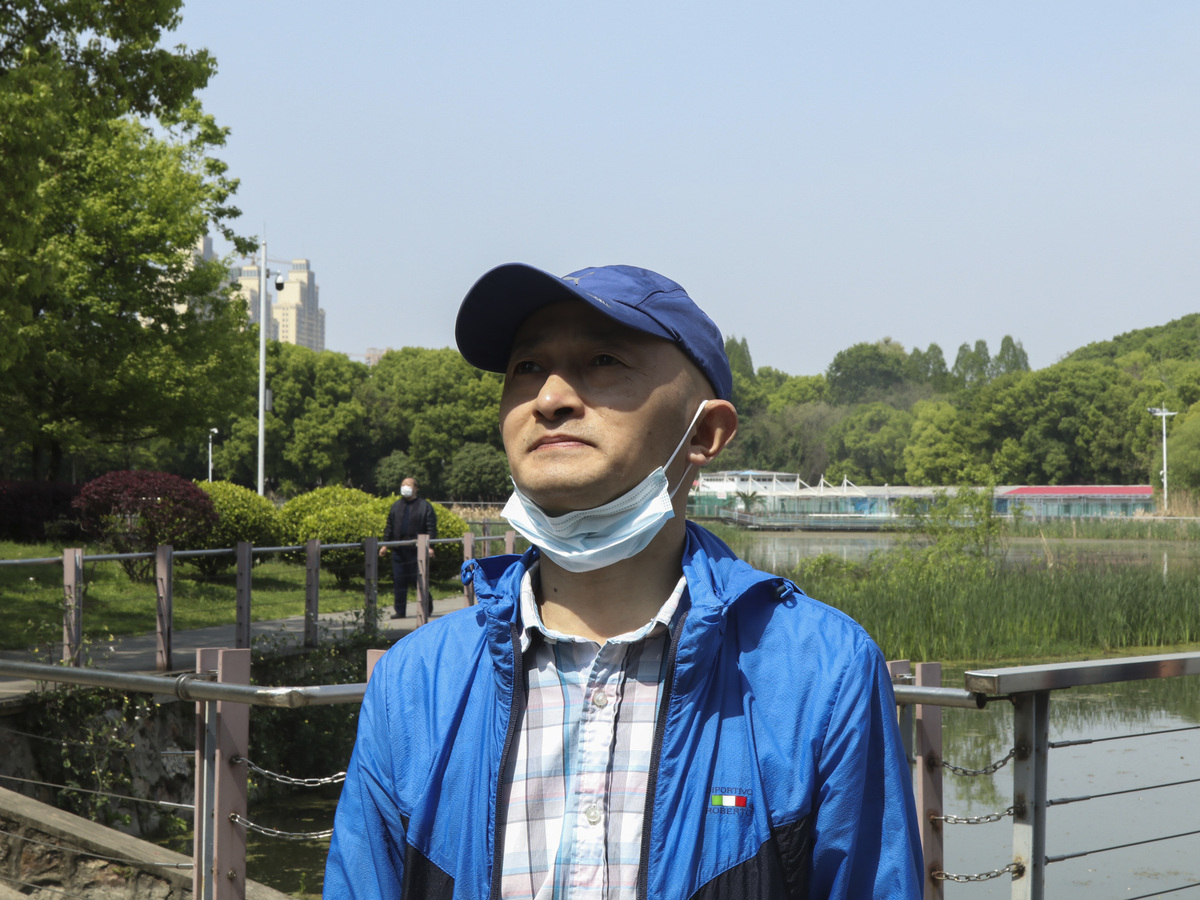 Zhang Hai stands on a bridge where he took his father out for a walk only about four months earlier. His father died of the novel coronavirus on Feb. 1. "The scenery is still here, but the person is gone," he sighs. He says he frequently comes to this park "looking for memories."

More than two months after he watched his father die of the new coronavirus, Zhang Hai has yet to bury him. The 50-year-old Wuhan native wants to pay his last respects alone — but that's now against government rules.

"[My father's] work unit called and made it very clear that I have to be accompanied when I retrieve the ashes," Zhang recalled. "Maybe they are well-intentioned, but I just want to collect my father's ashes alone before burying him. I do not want to have strangers around."

More than 3,300 people have died of COVID-19 in China, as of Friday morning; just over three-fourths of those deaths were in the city of Wuhan. As new cases dwindle and quarantine restrictions ease, the city's weary residents are hoping to publicly mourn their dead, only to face new constraints.

Because of the epidemic and a citywide lockdown, Wuhan crematoriums did not begin releasing the remains of loved ones who died until late March. Shop owners around the Hankou and Nanchang crematoriums, two of the city's largest, told NPR that they saw families waiting in cars, packing the streets in the days leading up to Tomb Sweeping holiday, on April 4 this year, when people pay their respects to the dead. These families formed long lines waiting to pick up ashes.

Anyone who died during the COVID-19 outbreak in Wuhan was cremated for free, at government expense, regardless of whether they had died of the virus. Grave plots, which average around 40,000 yuan, or $5,660, are also subsidized; some are now 30% off.

But starting April 3, right before a holiday commemorating the dead, Wuhan authorities banned people from freely gathering at cemeteries and crematoriums until the end of the month. In addition, families now must reserve a time with neighborhood officials or workplace supervisors to pick up a loved one's ashes. These officials must also accompany family members to the burial plot.

On paper, the city wants to prevent public gatherings, where the risk of virus transmission is high. Yet many in Wuhan consider these measures as a means to control public expressions of grief, especially as frustration over how local officials initially covered up the outbreak continues to roil.

That has angered residents, like Zhang Hai, who say their final moments with a loved one's remains should be a family affair. 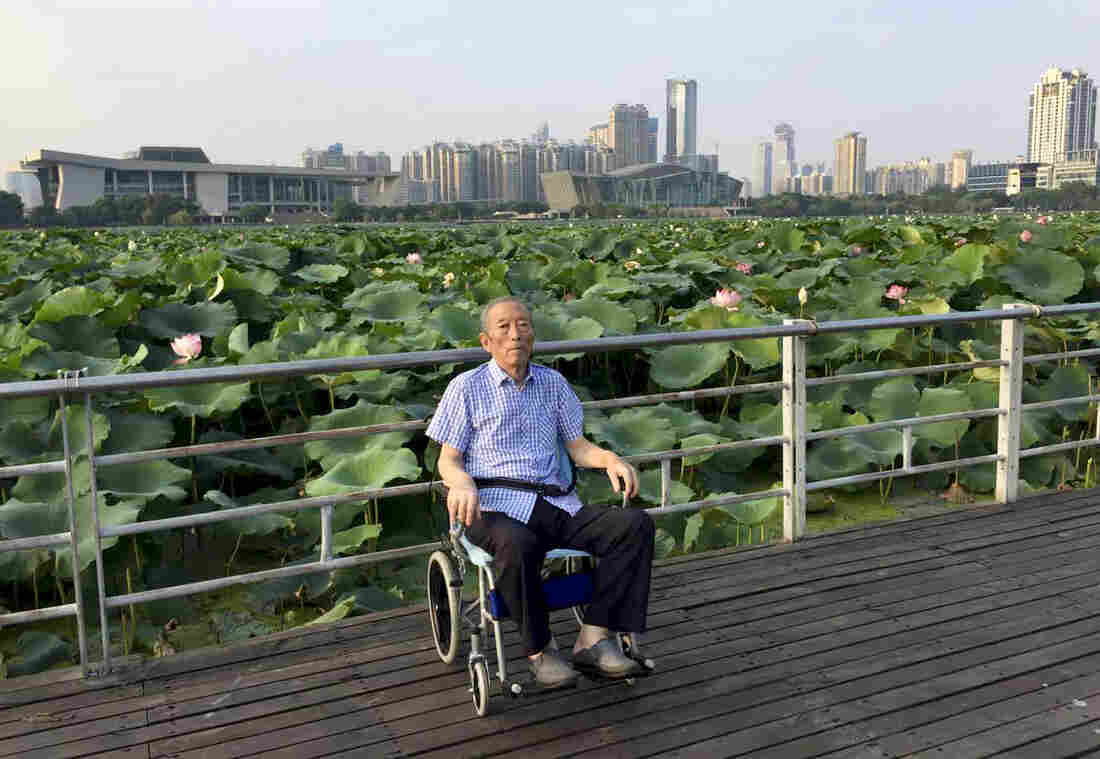 Zhang Lifa, the father of Zhang Hai, in a Wuhan park last year. He spent several years participating in China's nuclear weapons program in the 1960s and suffered life long health consequences from radiation exposure as a result. He died of the coronavirus this year. Zhang Hai hide caption 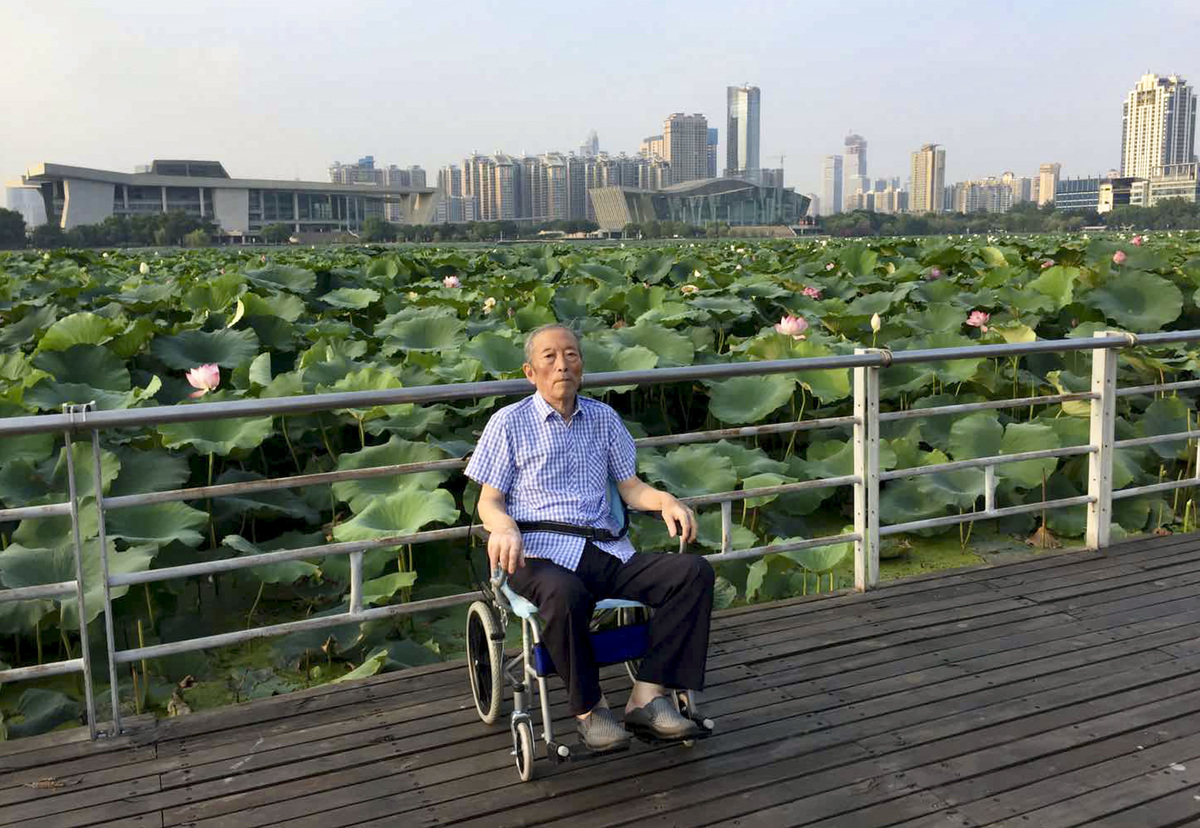 Zhang Lifa, the father of Zhang Hai, in a Wuhan park last year. He spent several years participating in China's nuclear weapons program in the 1960s and suffered life long health consequences from radiation exposure as a result. He died of the coronavirus this year.

In mid-January, Zhang took his 76-year-old father, Zhang Lifa, from their home in southern China to Wuhan, where they used to live, seeking medical treatment for a bone fracture. Unknown to him, health authorities in the city were already monitoring an outbreak involving dozens of cases of a mysterious SARS-like pneumonia.

"If the Wuhan government had disclosed more about the virus, I would have never driven my father back," the son told NPR in a Wuhan park, where he frequently brought his father for walks.

The elder Zhang contracted COVID-19 in Wuhan's Central Theater Command Hospital, a special military hospital. He died at 5 p.m. on Feb. 1 with his son by his side.

Zhang Hai, who managed to get into the isolation unit where his father spent his last moments, was able to remove his father's surgical gown and dress his father's body head to toe in new clothes, as tradition requires after death. "At the very least, I should restore his dignity before he leaves the world. He was a human being after all," said Zhang.

Other traditions had to be abandoned.

Like everyone in Wuhan who saw a family member die during the outbreak, Zhang was told to arrange a time to pick up and bury his father's ashes this month while accompanied by people from his father's work unit — where his father was employed during the years he lived in the city.

Zhang refused: "There are a few words I would like to say to my father in private."

So now, more than two months after his death, the elder Zhang's ashes still sit in Wuhan's Wuchang Crematorium, unburied, while his son petitions for a final, private moment alone with his father's remains.

"Chinese people are quite reserved. When my father was alive, I couldn't be expressive of my love for him like Westerners," the son said. "This is how I show my love. I cannot just say it out loud.

On Tomb Sweeping Day last Saturday, China observed three minutes of silence across the country to commemorate those who had died from the virus. But authorities remain sensitive about open displays of mourning and dissatisfaction.

Pictures of somber family members waiting in line to pick up their relatives' ashes outside Wuhan's crematoriums went viral on Chinese social media in late March but were quickly deleted. The pictures stoked public debate online about whether China's statistics had severely undercounted the number of deaths because of COVID-19 — an allegation officials have strongly denied.

The day after Zhang met with NPR, two government officials visited his home in Wuhan. He receives constant calls from neighborhood officials reminding him not to talk to the media and demanding to know his location. He believes his phone is being monitored.

Another family who lost a member to the new coronavirus refused to meet with NPR reporters because neighborhood officials installed a camera outside their front door to monitor whenever they left. A third family who created a chat group for other mourning families was accosted by police and forced to delete the group.

A video of the encounter shared with NPR shows two Wuhan police officers confronting the family, who repeatedly explained that they had no "ulterior motives" in creating the group. "I had already said it when you guys called last time. Our group is completely legal and reasonable," one family member says.

Zhang Hai believes his father deserves a proper sendoff befitting a longtime Communist Party member. From 1962 to 1968, the elder Zhang served in China's nuclear weapons project in the 1960s and suffered lifelong health consequences, including deafness in one ear, because of the radiation exposure.

"It is only after his passing did I realize how important he was to me," Zhang said, crying quietly. "When a loved one is gone, that feeling becomes very strong. When I think about him, I get very emotional. I only have one father."

Others are also struggling to make sense of death that has swept away so many, so quickly in one city.

Wuhan resident Dong Bo's father died of a pneumonia-like illness before he could be tested. Dong is certain he had the coronavirus, because Dong's sister later was confirmed to have COVID-19 and eventually treated in one of the 16 makeshift field hospitals erected during the height of the outbreak in Wuhan.

Last week, he was finally able to retrieve his father's ashes, accompanied by a neighborhood official. He then reserved a time to bury his father. The moment gave him a small measure of closure.

"My mood is more stable. Spring will come eventually," Dong said. "Everything has to get better in the end."

A caption in a previous version of this story incorrectly referred to Zhang Lifa as Zhang Linfa.