Accessibility links
Why Guidelines For Face Masks Are So Varied During The Coronavirus Crisis : Goats and Soda Some agencies and places urged or required people to use face coverings in public early on. Others dismissed the coverings as ineffective, then revised their stance. Why the differences? 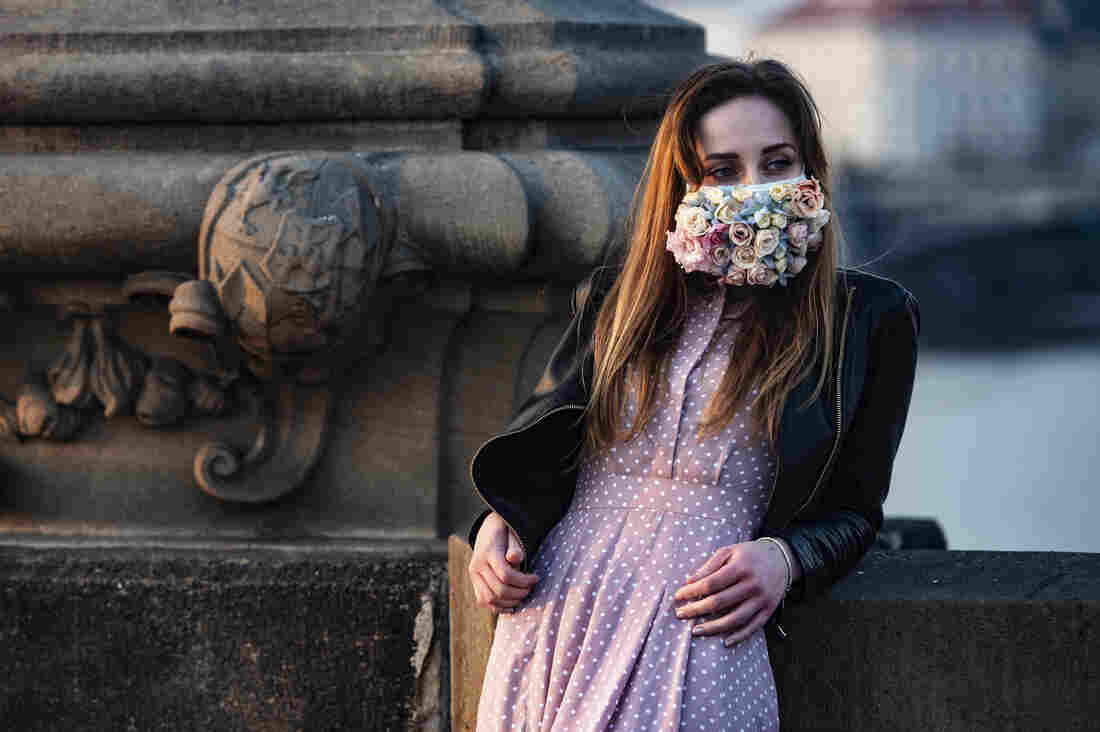 A do-it-yourself mask culture is springing up in the Czech Republic. This woman was photographed on the Charles Bridge in Prague on March 28. Michal Cizek/AFP via Getty Images hide caption 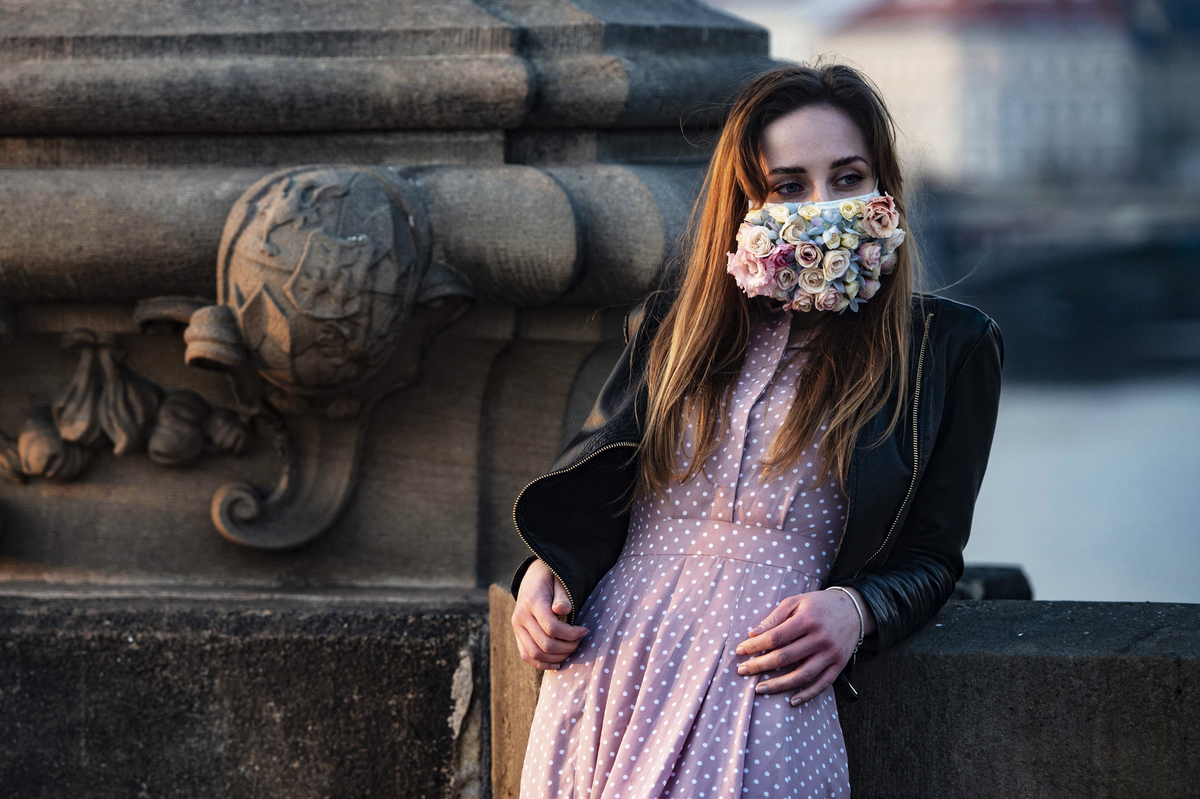 A do-it-yourself mask culture is springing up in the Czech Republic. This woman was photographed on the Charles Bridge in Prague on March 28.

On Feb. 29, the U.S. surgeon general Dr. Jerome Adams tweeted that masks do not offer any benefit to the average citizen.

They are NOT effective in preventing general public from catching #Coronavirus, but if healthcare providers can’t get them to care for sick patients, it puts them and our communities at risk!
https://t.co/UxZRwxxKL9

About a month later, on Friday, April 3, the Centers for Disease Control and Prevention recommended that Americans wear "cloth face coverings fashioned from household items or made at home from common materials ... as an additional, voluntary public health measure."

This isn't the only example of a change or updating of mask-wearing policies during the coronavirus crisis. It's happened in countries around the world — from Singapore to Austria to Kenya (which just announced one of the world's strictest policies — police are arresting anyone caught without a mask in their vehicle, on a bus or in a public place.)

Meanwhile, some health agencies have taken a stand that calls for mask-wearing in public from the early stages of the outbreak — Hong Kong on Jan. 24, mainland China on Jan. 31. 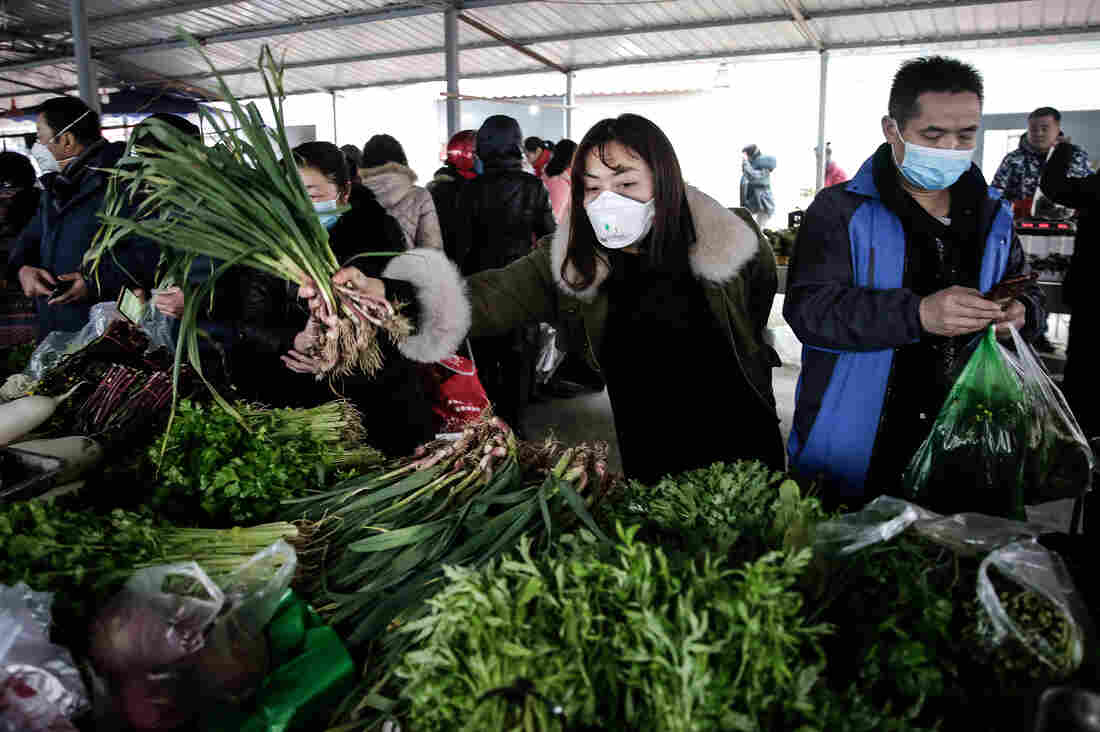 In Wuhan, China, and other parts of East Asia, wearing masks in public has been commonplace since the SARS outbreak in the early 2000s. This photo was taken on January 23, about a week before China called on citizens to wear masks as a way to stem the spread of the novel coronavirus. Stringer for NPR hide caption

To understand why mask guidelines have been so varied, NPR reached out to specialists in academia and in government. What we learned is that face mask guidelines are about science — but go beyond. The reasons for a policy may have to do with practical considerations like the national supply of masks but may also reflect cultural values and history.

In order to understand the range of guidelines, the first issue to consider is the data on the potential benefits of masks. As with so many points surrounding the novel coronavirus, there's not a clear-cut finding.

But there is emerging research and data that suggests transmission of COVID-19 by asymptomatic and pre-symptomatic individuals. Such research has been coming out at least since February; the latest report is from Singapore on April 1. These studies emphasize that people can spread the virus before realizing that they are sick — and that wearing a mask in public could help keep the infected person from spreading infectious droplets.

Among the reasons for reluctance on the part of some health agencies and places to urge mask wearing is the concern about the shortage of masks for medical workers. That's why the World Health Organization has stayed consistent in its recommendation, Margaret Harris of its coronavirus response team told NPR. And that position is: yes to masks for health-care workers and people with symptoms, no for the general public.

WHO and other agencies have also raised concerns about the potential problems that could arise due to the wearing of a mask — for example, a false sense of security that would undermine other preventive measures or self-contamination from touching a contaminated mask.

Epidemiologist Sergio Brusin who works on the European Center for Disease Control's coronavirus response, offered NPR a similar rationale in an interview. However, ECDC only mentioned that face masks aren't effective in protecting the wearer on its public-facing website. A number of other health agencies — like WHO and the CDC — offered little explanation on their website.

The result of these sometimes incomplete messages: "I think that if you talk to even the highly informed members of the general public and ask[ed] them a week, or two or three weeks ago, if the face masks work, they would say 'no' because they would have read CDC guidance, WHO guidance," says Lawrence Gostin, professor of global health law at Georgetown University and director of the World Health Organization Center on National & Global Health Law.

"But that wouldn't have been correct. Based upon the science [about potential benefits of masks for the public] we knew at the time."

Governments should not have downplayed the importance of face masks [as a protective measure for the public], says Leiyu Shi, who researches comparative health systems and health policy at Johns Hopkins University, "because it will make them [seem] very foolish when they change their stance. Again and again," Shi says.

In response to NPR's inquiry about its April 3 guideline change, the CDC said its change was driven by "increasing and widespread transmission of the new coronavirus across the country," citing studies published in February and March showing pre-symptomatic and a symptomatic spread. A CDC spokesperson also noted reports from Asian countries showing that a cloth face covering can reduce the chance of spreading respiratory droplets when people need to be in places with others.

Asked by NPR about the Surgeon General's earlier tweet about the ineffectiveness of masks, the office of the Surgeon General issued a statement Thursday noting that back in February Dr. Adams was following the CDC, WHO and other health organizations, which all recommended against wearing masks as a way to protect the person wearing them. The statement said that the understanding on spread from infected individuals who have not shown symptoms has since changed.

The Impact Of SARS On Mask Guidance

For Jeremy Lim, Adjunct Associate professor of public health from the National University of Singapore School of Public Health, East Asia's threshold for taking action on face masks and more potentially preventive measures was sparked by SARS, or Severe Acute Respiratory Syndrome, another coronavirus that swept through the region in 2003.

"Policymakers will always have to live with uncertainty and incomplete information,' Lim says. "For East Asian countries, the attitude was 'better to be safe than to be sorry.' "

Asked about the new CDC position in the U.S., public health academics like Gostin and Shi believe the guideline changes in the U.S. could have come sooner, given the emerging evidence of potential benefits. 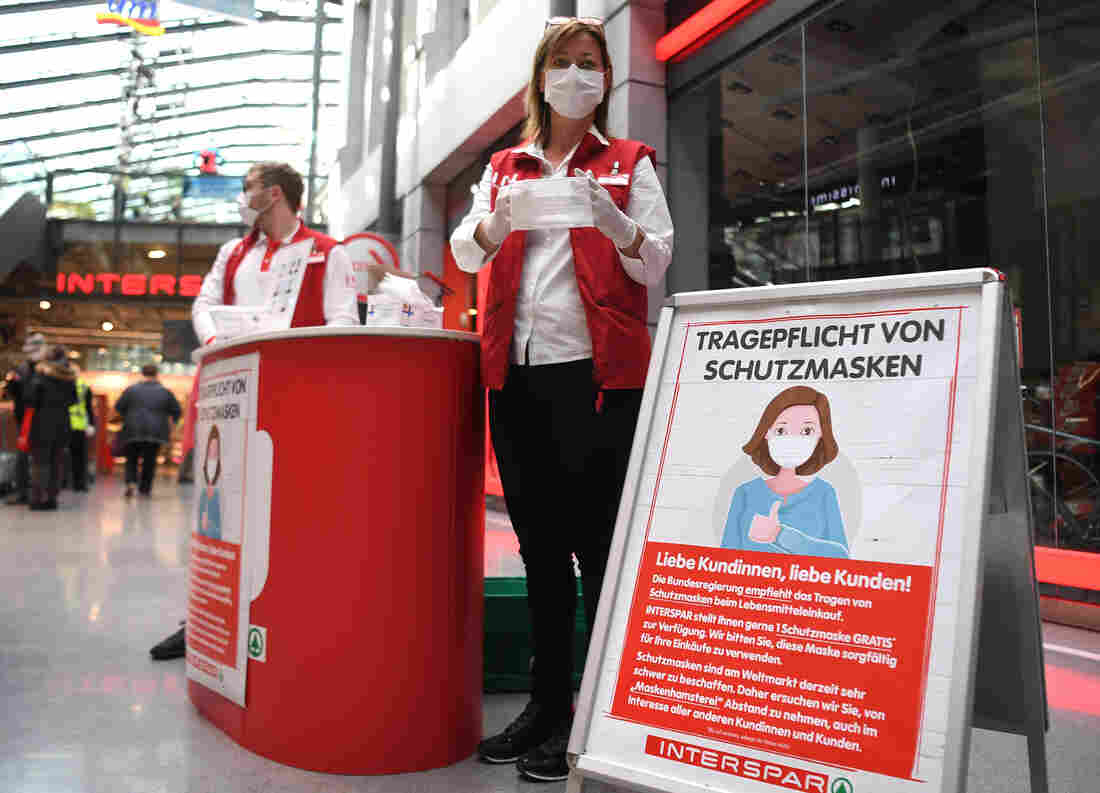 The new rule in Austria is that, as of this week, masks are a must when shopping. On April 1, supermarket employees handed out masks to customers as they arrived. Helmut Fohringer/APA/AFP via Getty Images hide caption

But it's not that simple just to issue guidelines based on science, noted many of the experts interviewed by NPR. Before issuing guidelines, governments also weigh how likely the public would be to follow them, they said. 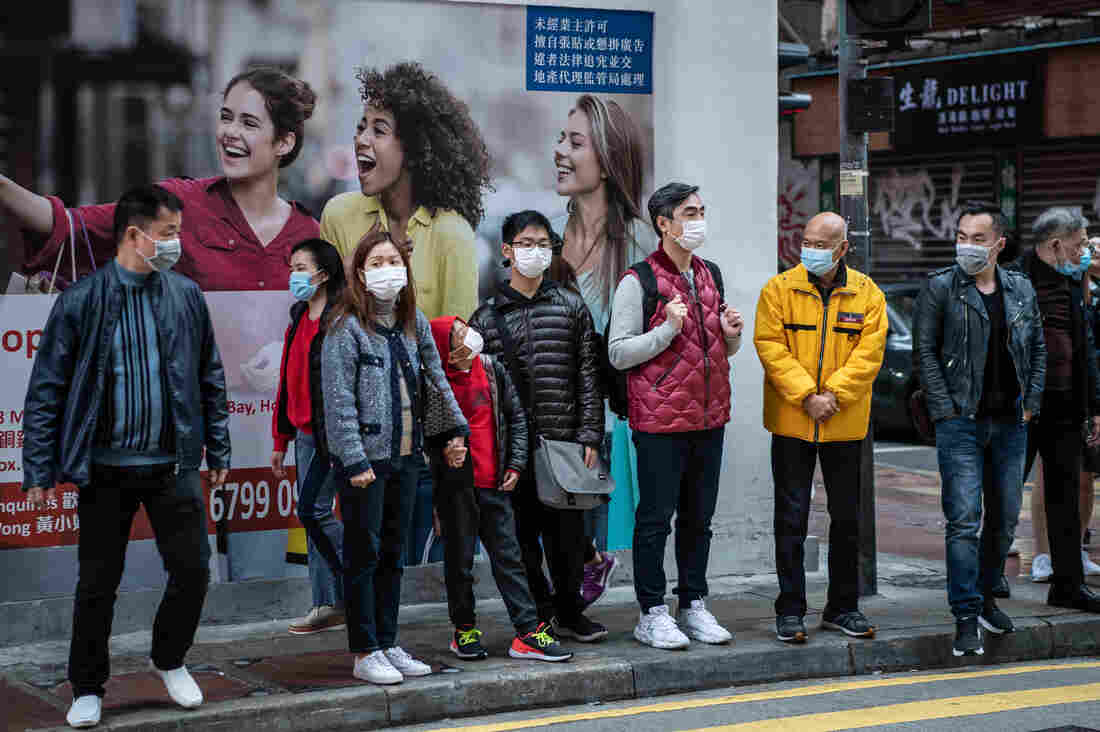 For societies that were affected by the SARS epidemic, the widespread usage of masks was more quickly adopted during the spread of COVID-19. Photograph of people waiting to cross the street in the Causeway Bay neighborhood of Hong Kong, Monday, January 27, 2020. Laurel Chor for NPR hide caption

The existing culture of mask-wearing helped Asian societies in this regard — and is partly a legacy of SARS. After surviving the outbreak 17 years ago, many people in this part of the world began wearing masks even if they just had a cold — to protect others but also for a sense of being protected from others, even if there isn't scientific data to back that up.

"The mask is almost like a talisman," says Harris of the WHO's coronavirus response team. "People feel more secure and protected."

The culture is different in Europe and the U.S., where people are less familiar with the idea of wearing a mask to protect others. People may think the face mask wearers they see want "to be protected from them," Harris says.

To change the culture regarding masks or any other public health intervention, the U.S. needs to issue consistent messages from many different levels of government, says Ross Brownson, professor of Public Health at Washington University in St. Louis. He researched how research is translated into evidence-based policies.

Brownson, Shi and Gostin all say that the heads of government should lead by example, practicing what they preach.

"It would be a complete shock to the American public to see widespread face mask use," says Gostin. "And I would like to see our leadership doing it to model that good behavior."

President Trump said last Friday, after the CDC updated guidelines were announced, that he would not follow them: "Sitting in the oval office, behind that beautiful resolute desk, the great resolute desk, I think wearing a face mask as I greet presidents, prime ministers, dictators, kings, queens. I don't know, somehow I don't see it for myself." 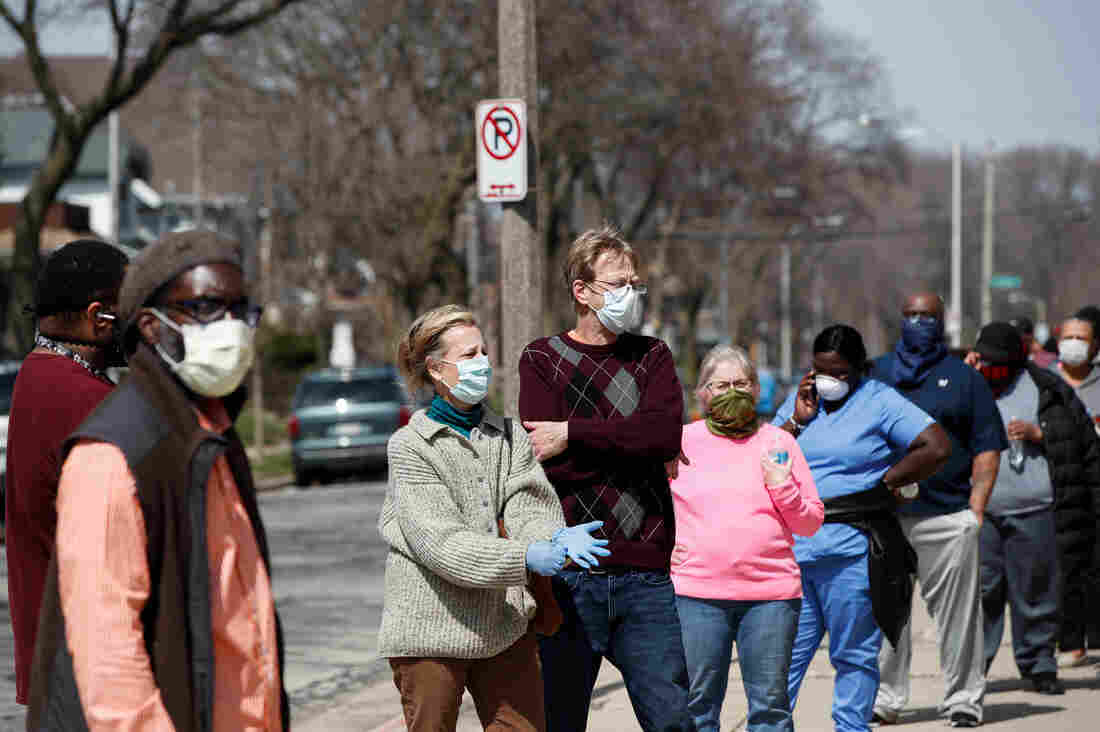 Masked residents wait in line to vote in the Wisconsin presidential primary election at a Milwaukee school on April 7. Early in the coronavirus outbreak, some U.S. officials suggested masks were ineffective but last week, the Centers for Disease Control and Prevention issued a recommendation to use them because of "potential advantages." Kamil Krzaczynski/AFP via Getty Images hide caption

"The president's, you know, an awfully powerful person. And if he doesn't think he needs it, why should I?" Gostin says.

The matter of masks is also tied up with the willingness of citizens to heed advice from the government.

In "South Korea, for instance, or even Singapore, a recommendation from the government is taken "really literally and in a very stringent way," says Brusin of ECDC. Other sources interviewed for this story suggest that is because there may be more trust in government than in western societies.

"Other countries know that they have to communicate more to convince the citizens to abide by the values, recommendations, and culture has an influence into that," Brusin adds.

America is a "fiercely individualistic" country, says Gostin, where many might feel "you couldn't force me to wear a mask." Other researchers agreed with his assessment.

But the mask-wearing policies in other country do not necessarily reflect a more authoritian government, say some of NPR's interviewees. "Perhaps we have a bit too glibly dismissed the Chinese approach by saying that it's an authoritarian system." Lim says, "People are obedient, but it's really not about being [in] authoritarian [systems]. It's fundamentally accepting that society comes before self and putting the greater good ahead of one's own interests."

And even while discussion of public mask-wearing continues, the academics interviewed for this article agree that social distancing is the most important measure the public can take to fight the virus. 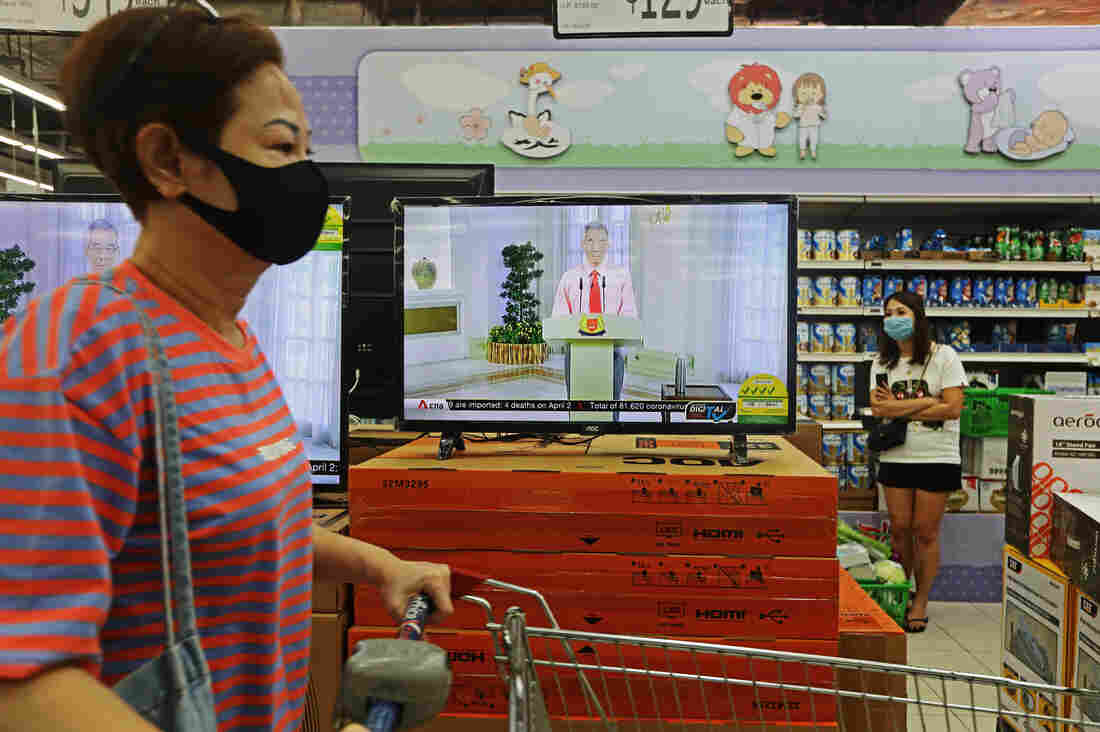 Singapore Prime Minister Lee Hsien Loong addresses the country via live telecast while customers shop for groceries on April 3. Early in the outbreak, Singapore did not recommend masks for the public because of shortages, but began urging public mask-wearing this month to prevent transmission by infected people who were not showing symptoms. Suhaimi Abdullah/Getty Images hide caption